The classical i-vectors and the latest end-to-end deep speaker embeddings are the two representative categories of utterance-level representations in automatic speaker verification systems. Traditionally, once i-vectors or deep speaker embeddings are extracted, we rely on an extra length normalization step to normalize the representations into unit-length hyperspace before back-end modeling. In this paper, we explore how the neural network learn length-normalized deep speaker embeddings in an end-to-end manner. To this end, we add a length normalization layer followed by a scale layer before the output layer of the common classification network. We conducted experiments on the verification task of the Voxceleb1 dataset. The results show that integrating this simple step in the end-to-end training pipeline significantly boosts the performance of speaker verification. In the testing stage of our L2-normalized end-to-end system, a simple inner-product can achieve the state-of-the-art. 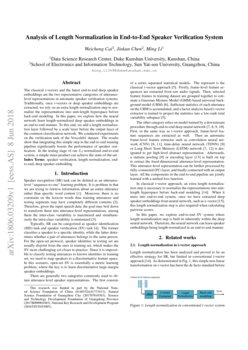 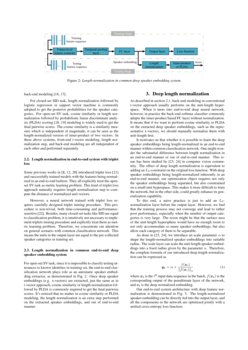 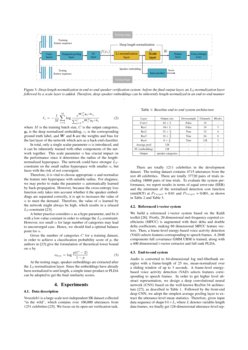 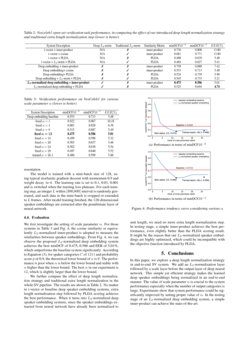 In this paper, we explore the encoding/pooling layer and loss function i...
Weicheng Cai, et al. ∙

One of the most important parts of an end-to-end speaker verification sy...
Soonshin Seo, et al. ∙

Speaker recognition (SR) task can be defined as an utterance-level “sequence-to-one” learning problem. It is problem in that we are trying to retrieve information about an entire utterance rather than specific word content [1]

. Moreover, there is no constraint on the lexicon words thus training utterances and testing segments may have completely different contents

. The former classifies a speaker to a specific identity, while the latter determines whether a pair of utterances belongs to the same person. For the open-set protocol, speaker identities in the testing set are usually disjoint from the ones in training set, which makes the SV more challenging yet closer to practice. Since it is impossible to classify testing utterances to known identities in training set, we need to map speakers to a discriminative feature space. In this scenario, open-set SV is essentially a metric learning problem, where the key is to learn discriminative large-margin speaker embeddings.

There are generally two categories commonly used to obtain utterance-level speaker representations. The first consists of series of separated statistical models. The represent is the classical i-vector approach [5]

[6]. Sufficient statistics of each utterance on the UBM is accumulated, and a factor analysis based i-vector extractor is trained to project the statistics into a low-rank total variability subspace [5].

The other category relies on a model trained by a downstream procedure through end-to-end deep neural network [7, 8, 9, 10]

[7, 12] is designated to get high-level abstract representation. Afterward, a statistic pooling [9] or encoding layer [13]

In classical i-vector approach, an extra length normalization step is necessary to normalize the representations into unit-length hyperspace before back-end modeling [14]. When it turns into end-to-end system, once we have extracted deep speaker embeddings from theneural network, such as x-vector [15], this length normalization step is also required when calculating pairwise scores.

In this paper, we explore end-to-end SV system where length normalization step is built-in inherently within the deep neural network. Therefore, the neural network can learn speaker embeddings being length-normalized in an end-to-end manner.

Length normalization has been analyzed and proved to be an effective strategy for SR, but limited in conventional i-vector approach [14]. As demonstrated in Fig. 1

, this simple non-linear transformation on i-vector has been the de facto standard before back-end modeling

[18, 19] modeling is widely used to get the final pairwise scores. The cosine similarity is a similarity measure which is independent of magnitude, it can be seen as the length-normalized version of inner-product of two vectors. In these above systems, front-end i-vector modeling, length normalization step, and back-end modeling are all independent of each other and performed separately.

Some previous works in [8, 12, 20] introduced triplet loss [21] and successfully trained models with the features being normalized in an end-to-end fashion. They all explicitly treat the open-set SV task as a metric learning problem. This kind of triplet loss approach naturally requires length normalization step to compute the distance of normalized unit vectors.

However, a neural network trained with triplet loss requires carefully designed triplet mining procedure. This procedure is non-trivial, both time-consuming and performance-sensitive [22]. Besides, many closed-set tasks like SID are equal to classification problem, it is intuitively not necessary to implement triplets mining procedure and explicitly treat them as metric learning problem. Therefore, we concentrate our attention on general scenario with common classification network. This means the units in the output layer are equal to the pre-collected speaker categories in training set.

For open-set SV task, since it is impossible to classify testing utterances to known identities in training set, the end-to-end classification network plays role as an automatic speaker embedding extractor, as demonstrated in Fig. 2. Once deep speaker embeddings (e.g. x-vectors) are extracted, just the same as in i-vector approach, cosine similarity or length normalization followed by PLDA is commonly required to get the final pairwise scores. It’s noticed that no matter in cosine similarity or PLDA modeling, the length normalization is an extra step performed on the extracted speaker embeddings, and out of end-to-end manner.

As described in section 2.1, back-end modeling in conventional i-vector approach usually performs on the unit-length hyperspace. When it turns into end-to-end deep neural network, however, in practice the back-end softmax classifier commonly adopts the inner-product based FC layer without normalization. It means that if we want to perform cosine similarity or PLDA on the extracted deep speaker embeddings, such as the representative x-vectors, we should manually normalize them with unit-length first.

in computer vision community. The effect of deep length normalization is equivalent to adding an

L2-constraint on the original loss function. With deep speaker embeddings being length-normalized inherently in an end-to-end manner, our optimization object requires not only the speaker embeddings being separated, but also constrained on a small unit hyperspace. This makes it more difficult to train the network, but in the other side, could greatly enhance its generalization capability.

To this end, a naive practice is just to add an L2-normalization layer before the output layer. However, we find that the training process may not converge and lead to rather poor performance, especially when the number of output categories is very large. The reason might be that the surface area of the unit-length hypersphere would have not enough room to not only accommodate so many speaker embeddings, but also allow each category of them to be separable.

where xi is the ith input data sequence in the batch, f(xi) is the corresponding output of the penultimate layer of the network, and vi is the deep normalized embedding.

Our end-to-end system architecture with deep feature normalization is demonstrated in Fig.

3. The length-normalized speaker embedding can be directly fed into the output layer, and all the components in the network are optimized jointly with a unified cross-entropy loss function:

where M is the training batch size, C is the output categories, yi is the deep normalized embedding, ci is the corresponding ground truth label, and W and b are the weights and bias for the last layer of the network which acts as a back-end classifier.

In total, only a single scalar parameter α is introduced, and it can be inherently trained with other components of the network together. This scale parameter α has a crucial impact on the performance since it determines the radius of the length-normalized hyperspace. The network could have stronger L2-constraint on the small radius hyperspace with smaller α, but faces the risk of not convergent.

Therefore, it is vital to choose appropriate α and normalize the feature into hyperspace with suitable radius. For elegance, we may prefer to make the parameter α automatically learned by back-propagation. However, because the cross-entropy loss function only takes into account whether it the speaker embeddings are separated correctly, it is apt to increases the value of α to meet the demand. Therefore, the value of α learned by the network might always be high, which results in a relaxed L2-constraint [23].

A better practice considers α as a hype-parameter, and fix it with a low-value constant in order to enlarge the L2-constraint. However, too small α for large number of categories may lead to the unconverged case. Hence, we should find an optimal balance point for α.

Given the number of categories C for a training dataset, in order to achieve a classification probability score of p, the authors in [23] give the formulation of theoretical lower bound on α by

At the testing stage, speaker embeddings are extracted after the L2-normalization layer. Since the embeddings have already been normalized to unit length, a simple inner-product or PLDA can be adopted to get the final similarity scores.

Voxceleb1 is a large scale text-independent SR dataset collected “in the wild”, which contains over 100,000 utterances from 1251 celebrities [25]. We focus on its open-set verification task.

There are totally 1211 celebrities in the development dataset. The testing dataset contains 4715 utterances from the rest 40 celebrities. There are totally 37720 pairs of trials including 18860 pairs of true trials. To evaluate the system performance, we report results in terms of equal error-rate (EER) and the minimum of the normalized detection cost function (minDCF) at PTarget = 0.01 and PTarget = 0.001, as shown in Table 2 and Table 3.

Audio is converted to 64-dimensional log mel-filterbank energies with a frame-length of 25 ms, mean-normalized over a sliding window of up to 3 seconds. A frame-level energy-based voice activity detection (VAD) selects features corresponding to speech frames. In order to get higher level abstract representation, we design a deep convolutional neural network (CNN) based on the well-known ResNet-34 architecture [27], as described in Table 1. Followed by the front-end deep CNN, we adopt the simplest average pooling layer to extract the utterance-level mean statistics. Therefore, given input data sequence of shape 64×L, where L denotes variable-length data frames, we finally get 128-dimensional utterance-level representation.

The model is trained with a mini-batch size of 128, using typical stochastic gradient descent with momentum 0.9 and weight decay 1e-4. The learning rate is set to 0.1, 0.01, 0.001 and is switched when the training loss plateaus. For each training step, an integer

L within [300,800] interval is randomly generated, and each data in the mini-batch is cropped or extended to L frames. After model training finished, the 128-dimensional speaker embeddings are extracted after the penultimate layer of neural network.

We first investigate the setting of scale parameter α. For those systems in Table 3 and Fig. 4, the cosine similarity or equivalently L2-normalized inner-product is adopted to measure the similarities between speaker embeddings. From Fig. 4, we can observe the proposed L2-normalized deep embedding system achieves the best minDCF of 0.475, 0.586 and EER of 5.01%, which outperforms the baseline system significantly. According to Equation (3), for speaker categories C of 1211 and probability score p of 0.9, the theoretical lower bound of α is 9. The performance is poor when α is below the lower bound and stable with α higher than the lower bound. The best α in our experiment is 12, which is slightly larger than the lower bound.

In this paper, we explore a deep length normalization strategy in end-to-end SV system. We add an L2-normalization layer followed by a scale layer before the output layer of the deep neural network. This simple yet efficient strategy makes the learned deep speaker embeddings being normalized in an end-to-end manner. The value of scale parameter α is crucial to the system performance especially when the number of output categories is large. Experiments show that system performance could be significantly improved by setting a proper value of α. In the testing stage of an L2-normalized deep embedding system, a simple inner-product can achieve the state-of-the-art.