Analysis of a fully discrete approximation for the classical Keller–Segel model: lower and a priori bounds

This paper is devoted to constructing approximate solutions for the classical Keller–Segel model governing chemotaxis. It consists of a system of nonlinear parabolic equations, where the unknowns are the average density of cells (or organisms), which is a conserved variable, and the average density of chemioattranct. The numerical proposal is made up of a crude finite element method together with a mass lumping technique and a semi-implicit Euler time integration. The resulting scheme turns out to be linear and decouples the computation of variables. The approximate solutions keep lower bounds – positivity for the cell density and nonnegativity for the chemioattranct density –, are mass conservative, satisfy a discrete energy law, and have a priori energy estimates. The latter is achieved by means of a discrete Moser–Trudinger inequality. As far as we know, our numerical method is the first one that can be encountered in the literature dealing with all of the previously mentioned properties at the same time. 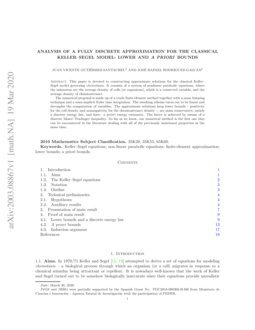 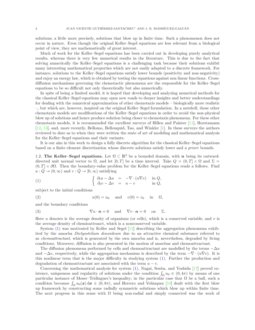 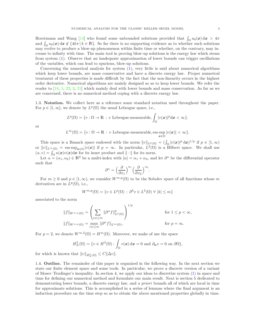 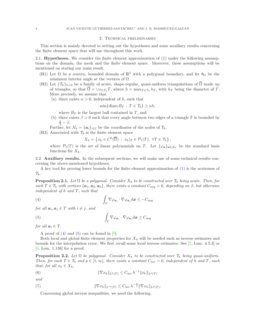 In this paper, we focus on constructing numerical schemes preserving the...
Jialin Hong, et al. ∙

Numerical analysis for a chemotaxis-Navier-Stokes system

In this paper we develop a numerical scheme for approximating a d-dimens...
Abelardo Duarte-Rodríguez, et al. ∙

Finite Element numerical schemes for a chemo-attraction and consumption model

In this paper we demonstrate the utility of fusing energy-resolved obser...
Hamideh Rezaee, et al. ∙

In 1970/71 Keller and Segel [15, 16] attempted to derive a set of equations for modeling chemotaxis – a biological process through which an organism (or a cell) migrates in response to a chemical stimulus being attractant or repellent. It is nowadays well-known that the work of Keller and Segel turned out to be somehow biologically inaccurate since their equations provide unrealistic solutions; a little more precisely, solutions that blow up in finite time. Such a phenomenon does not occur in nature. Even though the original Keller–Segel equations are less relevant from a biological point of view, they are mathematically of great interest.

In spite of being a limited model, it is hoped that developing and analyzing numerical methods for the classical Keller–Segel equations may open new roads to deeper insights and better understandings for dealing with the numerical approximation of other chemotaxis models – biologically more realistic –, but which are, however, inspired on the original Keller–Segel formulation. In a nutshell, these other chemotaxis models are modifications of the Keller–Segel equations in order to avoid the non-physical blow up of solutions and hence produce solution being closer to chemotaxis phenomena. For these other chemotaxis models, it is recommended the excellent surveys of Hillen and Painter [11], Horstamann [12, 13], and, more recently, Bellomo, Bellouquid, Tao, and Winkler [1]. In these surveys the authors reviewed to date as to when they were written the state of art of modeling and mathematical analysis for the Keller–Segel equations and their variants.

It is our aim in this work to design a fully discrete algorithm for the classical Keller–Segel equations based on a finite element discretization whose discrete solutions satisfy lower and a priori bounds.

Let Ω⊂R2 be a bounded domain, with n

being its outward-directed unit normal vector to

subject to the initial conditions

and the boundary conditions

System (1) was motivated by Keller and Segel [15] describing the aggregation phenomena exhibited by the amoeba Dictyostelium discoideum due to an attractive chemical substance referred to as chemoattractant, which is generated by the own amoeba and is, nevertheless, degraded by living conditions. Moreover, diffusion is also presented in the motion of ameobae and chemoattractant.

Concerning the mathematical analysis for system (1), Nagai, Senba, and Yoshida [17] proved existence, uniqueness and regularity of solutions under the condition ∫Ωu0∈(0,4π) by means of one particular instance of Moser–Tridinguer’s inequality; in the particular case that Ω be a ball, such a condition becomes ∫Ωu0(x)dx∈(0,8π), and Herrero and Velázquez [10] dealt with the first blow up framework by constructing some radially symmetric solutions which blow up within finite time. The next progress in this sense with Ω being non-radial and simply connected was the work of Horstmann and Wang [14] who found some unbounded solutions provided that ∫Ωu0(x)dx>4π and ∫Ωu0(x)dx∉{4kπ|k∈N}. So far there is no supporting evidence as to whether such solutions may evolve to produce a blow-up phenomenon within finite time or whether, on the contrary, may increase to infinity with time. The main tool in proving blow-up solutions is the energy law which stems from system (1). Observe that an inadequate approximation of lower bounds can trigger oscillations of the variables, which can lead to spurious, blow-up solutions.

Concerning the numerical analysis for system (1), very little is said about numerical algorithms which keep lower bounds, are mass conservative and have a discrete energy law. Proper numerical treatment of these properties is made difficult by the fact that the non-linearity occurs in the highest order derivative. Numerical algorithms are mainly designed so as to keep lower bounds. We refer the reader to [18, 5, 22, 3, 21] which mainly deal with lower bounds and mass conservation. As far as we are concerned, there is no numerical method coping with a discrete energy law.

We collect here as a reference some standard notation used throughout the paper. For p∈[1,∞], we denote by Lp(Ω) the usual Lebesgue space, i.e.,

associated to the norm

for which is known that ∥v∥H2N(Ω)≤C∥Δv∥.

The remainder of this paper is organized in the following way. In the next section we state our finite element space and some tools. In particular, we prove a discrete version of a variant of Moser–Trudinger’s inequality. In section 4, we apply our ideas to discretize system (1) in space and time for defining our numerical method and formulate our main result. Next is section 5 dedicated to demonstrating lower bounds, a discrete energy law, and a priori bounds all of which are local in time for approximate solutions. This is accomplished in a series of lemmas where the final argument is an induction procedure on the time step so as to obtain the above mentioned properties globally in time.

This section is mainly devoted to setting out the hypotheses and some auxiliary results concerning the finite element space that will use throughout this work.

In the subsequent sections, we will make use of some technical results concerning the above-mentioned hypotheses.

A key tool for proving lower bounds for the finite element approximation of (1) is the acuteness of Th.

Let Ω be a polygonal. Consider Xh to be constructed over Th being acute. Then, for each T∈Th with vertices {a1,a2,a3}, there exists a constant Cneg>0, depending on β, but otherwise independent of h and T, such that

for all ai,aj∈T with i≠j, and

Both local and global finite element properties for Xh

Let Ω be polygonal. Consider Xh to be constructed over Th being quasi-uniform. Then, for each T∈Th and p∈[1,∞], there exists a constant Cinv>0, independent of h and T, such that, for all xh∈Xh,

Let Ω be polygonal. Consider Xh to be constructed over Th being quasi-uniform. Then for each p∈[1,∞], there exists a constant Cinv>0, independent of h, such that, for all xh∈Xh,

We introduce Ih:C(Ω)→Xh, the standard nodal interpolation operator, such that Ihη(a)=η(a) for all a∈Nh. Associated with Ih, a discrete inner product on Xh is defined by

Let Ω be polygonal. Consider Xh to be constructed over Th being quasi-uniform. Then, for each T∈Th, there exists Capp>0, independent of h and T, such that

Let Ω be polygonal. Consider Xh to be constructed over Th being quasi-uniform. Then it follows that there exists Capp>0, independent of h, such that

Let Ω be polygonal. Consider Xh to be constructed over Th being quasi-uniform. Let n∈N. Then it follows that there exist two positive constants Capp and Csta, independent of h, such that

where Csta depends on n.

Then, from (12) and the above identity, we have

Summing over T∈Th yields (14). The proof of (15) follows very closely the arguments of (14) for n=2. The first part of assertion (16) is a simple application of Jensen’s inequality, while the second part follows from (14) on using Hölder’s inequality, (9) for p=n and, later on, Minkowski’s inequality. ∎

The proof of the following proposition can be found in [4]. It is a generalization of a Moser–Trudinger-type inequality.

Let Ω be polygonal with θΩ being the minimum interior angle at the vertices of Ω. Then there exists a constant CΩ>0 depending on Ω such that for all u∈H1(Ω) with ∥∇u∥≤1 and ∫Ωu(x)dx=1, it follows that

Let Ω be polygonal with θΩ being the minimum interior angle at the vertices of Ω. Consider Xh to be constructed over Th being quasi-uniform. Let uh∈Xh with uh>0. Then it follows that there exists a constant CMT>0, independent of h, such that

An (average) interpolation operator into Nh will be required in order to properly initialize our numerical method. We refer to [19, 7].

Let Ω be polygonal. Consider Xh to be constructed over Th being quasi-uniform. Then there exists an (average) interpolation operator Qh from L1(Ω) to Nh such that

Moreover, let −~Δh be defined from Xh to Xh as

From elliptic regularity theory, the well-posedness of (24) is ensured by the convexity assumption stated in (H1) and

Let Ω be a convex polygon. Consider Xh to be constructed over Th being quasi-uniform. Then there exists a constant CLap>0, independent of h, such that

Let Ω be a convex polygon. Consider Xh to be constructed over Th being quasi-uniform. Then, for each p∈[1,∞], there exists a constant Csta>0, independent of h, such that

We begin by approximating the initial data (u0,v0) by (u0h,v0h)∈X2h as follows. Define

It should be noted that scheme (31)-(32) combines a finite element method together a mass-lumping technique to treat some terms and a semi-implicit time integrator. The resulting scheme is linear and decouples the computation of (un+1h,vn+1h).

In order to carry out our numerical analysis we must rewrite the chemotaxis term by using a barycentric quadrature rule as follows. Let T∈Th and consider bT∈T to be the barycentre of T. Then let ¯¯¯un+1h be the interpolation of un+1h into X0h, with X0h being the space of all piecewise constant functions over Th, defined by

As a result, one has

From now on we will use C to denote a generic constant independent of the discretization parameters (h,k).

Associated with the above definitions, consider

The definition of the above quantities will be apparent later.

We are now prepared to state the main result of this paper.

Moreover, if we are given h such that

As system (31)-(32) is linear, existence follows from uniqueness. The latter is an immediate outcome of a priori bounds for (un+1h,vn+1h).

In this section we address the proof of Theorem 3.1. Rather than prove en masse the estimates in Theorem 3.1, because all of them are connected, we have divided the proof into various subsections for the sake of clarity. The final argument will be an induction procedure on n relied on the semi-explicit time discretization employed in (31).

We first demonstrate lower bounds for (un+1h,vn+1h) and, as a consequence of this, a discrete local-in-time energy law is established.