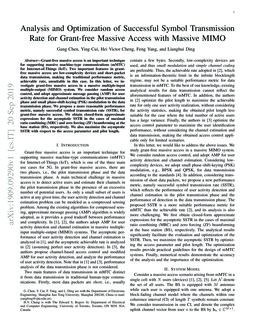 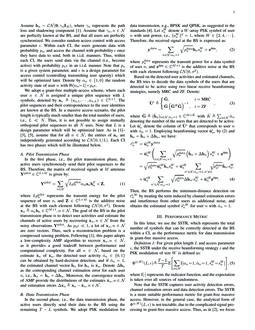 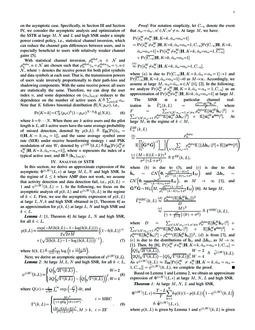 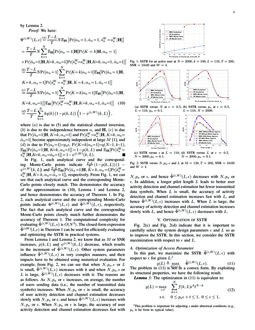 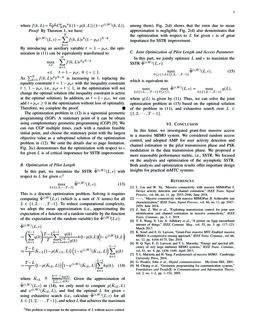 optimize the pilot length to maximize the achievable rate for only one user activity realization, without considering the activity statistics, making the obtained pilot length less suitable for the case where the total number of active users has a large variance. Finally, the authors in

[3] optimize the access control parameter to maximize the user identification performance, without considering the channel estimation and data transmission, making the obtained access control applicable only for limited scenarios.

In this letter, we would like to address the above issues. We study grant-free massive access in a massive MIMO system. We consider random access control, and adopt AMP for user activity detection and channel estimation. Considering low-complexity devices, we adopt small phase-shift-keying (PSK) modulation, e.g., BPSK and QPSK, for data transmission according to the standards [4]. In addition, considering transmission of short data packets, we propose a new performance metric, namely successful symbol transmission rate (SSTR), which reflects the performance of user activity detection and channel estimation in the pilot transmission phase and the performance of detection in the data transmission phase. The proposed SSTR is a more suitable performance metric for mMTC than the achievable rate [2], and its analysis is also more challenging. We first obtain closed-form approximate expressions for the asymptotic SSTR in the cases of maximal ratio combining (MRC) and zero forcing (ZF) beamforming at the base station (BS), respectively. The analytical results significantly facilitate the evaluation and optimization of the SSTR. Then, we maximize the asymptotic SSTR by optimizing the access parameter and pilot length. The optimization results provide practical guidelines for the design of mMTC systems. Finally, numerical results demonstrate the accuracy of the analysis and the importance of the optimization.

Consider a massive access scenario arising from mMTC in a single cell with N users (devices) [1, 2, 5]. Let N denote the set of all users. The BS is equipped with M antennas while each user is equipped with one antenna. We adopt a block-fading channel model where the channels within one coherence interval (CI) of length T

symbols remain constant. We consider transmission in one CI, and denote the complex uplink channel vector from user

n to the BS by hn∈CM×1. Assume hn∼CN(0,γnIM), where γn represents the path loss and shadowing component [1]. Assume that γn,n∈N are perfectly known at the BS, and that all users are perfectly synchronized. We consider random access control with access parameter ϵ

. Within each CI, the users generate data with probability

pa, and access the channel with probability ϵ once they have data to send, both in i.i.d. manners. Thus, within each CI, the users send data via the channel (i.e., become active) with probability paϵ in an i.i.d. manner. Note that pa is a given system parameter, and ϵ is a design parameter for access control (controlling transmitting user sparsity) which will be optimized later. Denote by αn∈{1,0} the random activity state of user n with Pr[αn=1]=paϵ.

We adopt a grant-free multiple-access scheme, where each user n∈N is assigned a unique pilot sequence with L symbols, denoted by . The pilot sequences and their correspondence to the user identities are known at the BS. In a massive access scenario, the pilot length is typically much smaller than the total number of users, i.e., L≪N. Thus, it is not possible to assign mutually orthogonal pilot sequences to all N uses. Note that L is a design parameter which will be optimized later. As in [1, 2, 3, 5], assume that for all n∈N, the entries of an are independently generated according to CN(0,1/L). Each CI has two phases which will be illustrated below.

In the first phase, i.e., the pilot transmission phase, the active users synchronously send their pilot sequences to the BS. Therefore, the matrix of received signals at M antennas Ypilot∈CL×M is given by:

where Lρpilotn represents the transmit energy for the pilot sequence of user n, and Z∈CL×M is the additive noise at the BS with each element following CN(0,σ2). Denote xn≜αnhn∈CM×1,n∈N. The goal of the BS in the pilot transmission phase is to detect user activities and estimate the channels of active users by recovering xn,n∈N from the noisy observations Ypilot. As paϵ≪1, a lot of xn,n∈N are zero vectors. Thus, such a reconstruction problem is a compressed sensing problem. Following [1], this paper adopts a low-complexity AMP algorithm to recover xn,n∈N, as it provides a good tradeoff between performance and computational complexity. For all n∈N, based on the estimate ^xn of xn, the detected user activity ^αn∈{0,1} can be obtained by hard-decision detection, and if ^αn=1, the estimated channel vector ^hn for hn is ^xn. Denote Δhn as the corresponding channel estimation error for each user n, i.e., hn=^hn+Δhn. Moreover, the convergence results of AMP provide the distributions of the estimates ^xn,n∈N and estimation errors Δxn≜xn−^xn,n∈N.

In the second phase, i.e., the data transmission phase, the active users directly send their data to the BS using the remaining T−L symbols. We adopt PSK modulation for data transmission, e.g., BPSK and QPSK, as suggested in the standards [4]. Let sWn denote a W-array PSK symbol of user n with unit power, i.e., ∥sWn∥2=1, where W∈{2,4,⋯}. Therefore, the received signal at the BS is expressed as:

where ρdatan represents the transmit power for a data symbol of user n, and zdata∈CM×1 is the additive noise at the BS with each element following CN(0,σ2).

Based on the detected user activities and estimated channels, the BS tries to decode the data symbols of the users that are detected to be active using two linear receive beamforming strategies, namely MRC and ZF. Denote:

where ^G≜(^hn)n∈N:^αn=1∈CM×^K with ^K≜∑n∈N^αn denoting the number of the users that are detected to be active. Let ^uin denote the column of ^Ui that corresponds to user n with ^αn=1. Employing beamforming vector ^uin, by (2) and hn=^hn+Δhn, we have:

Then, the BS performs the minimum-distance detection on ^ri,Wn by treating the term induced by channel estimation errors and interference from other users as additional noise, and obtains the estimated symbol ^si,Wn for user n with ^αn=1.

In this letter, we use the SSTR, which represents the total number of symbols that can be correctly detected at the BS within a CI, as the performance metric for data transmission in grant-free massive access.

For given pilot length L and access parameter ϵ, the SSTR under the receive beamforming strategy i and the PSK modulation of size W is defined as:

where I[⋅] represents the indicator function, and the expectation is taken over all sources of randomness.

M,N and L and high SNR under a simple power control policy, i.e., statistical channel inversion, which can reduce the channel gain differences between users, and is especially beneficial to users with relatively weaker channel gains [5].

With statistical channel inversion, ρpilotn,n∈N and ρdatan,n∈N are chosen such that ρpilotnγn=ρdatanγn=γ,n∈N, where γ denotes the receive power for both pilot symbols and data symbols at each user. That is, the transmission powers of users scale inversely proportionally to their path-loss and shadowing components. With the same receive power, all users are statistically the same. Therefore, we can drop the user index n, and some dependence on (αn)n∈N reduces to the dependence on the number of active users K≜∑n∈Nαn. Note that K

where k=0⋯N. When there are k active users and the pilot length is L, all k active users have the same average probability of missed detection, denoted by p(k,L)≜EH[Pr[^αn=0|H,K=k,αn=1]], and the same average symbol error rate (SER) under receive beamforming strategy i and PSK modulation of size W, denoted by ψ(i,W)(k,L)≜EH[Pr[^sWn≠sWn|H,K=k,^αn=αn=1]], where n represents the index of a typical active user, and H≜(hn)n∈N.

Next, we derive an asymptotic approximation of ψ(i,W)(k,L).

For notation simplicity, let C−n denote the event that αn′=^αn′,n′∈N,n′≠n. At large M, we have:

The SINR at a particular channel realization is ˜Γin(k,L)=ρdatan|^uiHn^hn|2F, where . At large M, in the regime of k<M,

Based on Lemma 1 and Lemma 2, we obtain an approximate expression of Φ(i,W)(L,ϵ) at large M, N, L and high SNR.

Fig. 2(c) and Fig. 2(d) indicate that it is important to carefully select the system design parameters ϵ and L so as to improve the SSTR. In this section, we consider the SSTR maximization with respect to ϵ and L.

In this part, we maximize the SSTR ˜Φ(i,W)(L,ϵ) with respect to ϵ for given L:111This problem is important for adjusting ϵ under abnormal conditions (e.g., pa is far from its typical value).

The problem in (11) is not in a convex form. By exploiting its structural properties, we have the following result.

The optimization in (11) is equivalent to:

By introducing an auxiliary variable t=1−paϵ, the optimization in (11) can be equivalently transformed to:

The optimization problem in (12) is a signomial geometric programming (SGP). A stationary point of it can be obtain using complementary geometric programming (CGP) [9]. We can run CGP multiple times, each with a random feasible initial point, and choose the stationary point with the largest objective value as a suboptimal solution of the optimization problem in (12). We omit the details due to page limitation. Fig. 2(c) demonstrates that the optimization with respect to ϵ for given L is of critical importance for SSTR improvement.

In this part, we maximize the SSTR ˜Φ(i,W)(L,ϵ) with respect to L for given ϵ:222This problem is important for the optimization of L without access control.

In this part, we jointly optimize L and ϵ to maximize the SSTR ˜Φ(i,W)(L,ϵ):

which is equivalent to:

In this letter, we investigated grant-free massive access in a massive MIMO system. We considered random access control, and adopted AMP for user activity detection and channel estimation in the pilot transmission phase and PSK modulation in the data transmission phase. We proposed a more reasonable performance metric, i.e., SSTR. We focused on the analysis and optimization of the asymptotic SSTR. Both analysis and optimization results offer important design insights for practical mMTC systems.