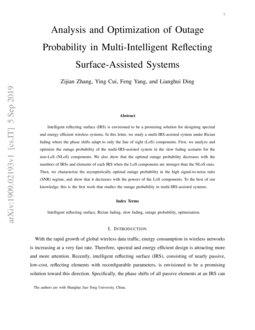 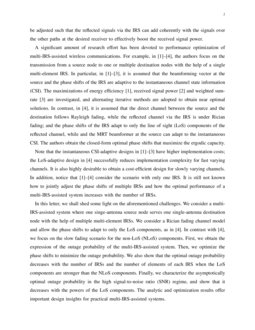 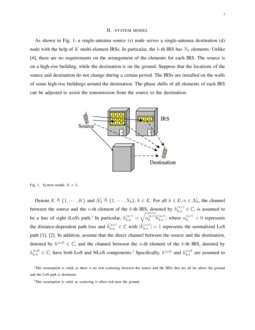 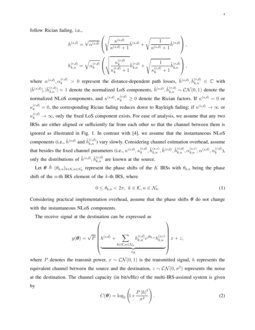 With the rapid growth of global wireless data traffic, energy consumption in wireless networks is increasing at a very fast rate. Therefore, spectral and energy efficient design is attracting more and more attention. Recently, intelligent reflecting surface (IRS), consisting of nearly passive, low-cost, reflecting elements with reconfigurable parameters, is envisioned to be a promising solution toward this direction. Specifically, the phase shifts of all passive elements at an IRS can be adjusted such that the reflected signals via the IRS can add coherently with the signals over the other paths at the desired receiver to effectively boost the received signal power.

A significant amount of research effort has been devoted to performance optimization of multi-IRS-assisted wireless communications. For example, in [1, 2, 3, 4], the authors focus on the transmission from a source node to one or multiple destination nodes with the help of a single multi-element IRS. In particular, in [1, 2, 3]

, it is assumed that the beamforming vector at the source and the phase shifts of the IRS are adaptive to the instantaneous channel state information (CSI). The maximizations of energy efficiency

[1], received signal power [2] and weighted sum-rate [3] are investigated, and alternating iterative methods are adopted to obtain near optimal solutions. In contrast, in [4], it is assumed that the direct channel between the source and the destination follows Rayleigh fading, while the reflected channel via the IRS is under Rician fading; and the phase shifts of the IRS adapt to only the line of sight (LoS) components of the reflected channel, while and the MRT beamformer at the source can adapt to the instantaneous CSI. The authors obtain the closed-form optimal phase shifts that maximize the ergodic capacity.

Note that the instantaneous CSI-adaptive designs in [1, 2, 3] have higher implementation costs; the LoS-adaptive design in [4] successfully reduces implementation complexity for fast varying channels. It is also highly desirable to obtain a cost-efficient design for slowly varying channels. In addition, notice that [1, 2, 4, 3] consider the scenario with only one IRS. It is still not known how to jointly adjust the phase shifts of multiple IRSs and how the optimal performance of a multi-IRS-assisted system increases with the number of IRSs.

In this letter, we shall shed some light on the aforementioned challenges. We consider a multi-IRS-assisted system where one singe-antenna source node serves one single-antenna destination node with the help of multiple multi-element IRSs. We consider a Rician fading channel model and allow the phase shifts to adapt to only the LoS components, as in [4]. In contrast with [4], we focus on the slow fading scenario for the non-LoS (NLoS) components. First, we obtain the expression of the outage probability of the multi-IRS-assisted system. Then, we optimize the phase shifts to minimize the outage probability. We also show that the optimal outage probability decreases with the number of IRSs and the number of elements of each IRS when the LoS components are stronger than the NLoS components. Finally, we characterize the asymptotically optimal outage probability in the high signal-to-noise ratio (SNR) regime, and show that it decreases with the powers of the LoS components. The analytic and optimization results offer important design insights for practical multi-IRS-assisted systems.

As shown in Fig. 1, a single-antenna source (s) node serves a single-antenna destination (d) node with the help of K multi-element IRSs. In particular, the k-th IRS has Nk elements. Unlike [4], there are no requirements on the arrangement of the elements for each IRS. The source is on a high-rise building, while the destination is on the ground. Suppose that the locations of the source and destination do not change during a certain period. The IRSs are installed on the walls of some high-rise buildings around the destination. The phase shifts of all elements of each IRS can be adjusted to assist the transmission from the source to the destination.

where α(s,d),α(r,d)k>0 represent the distance-dependent path losses, ¯h(s,d),¯h(r,d)k,n∈C with |¯h(s,d)|,|¯h(r,d)k,n|=1 denote the normalized LoS components, ~h(s,d),~h(r,d)k,n∼CN(0,1) denote the normalized NLoS components, and κ(s,d),κ(r,d)k≥0 denote the Rician factors. If κ(s,d)=0 or κ(r,d)k=0, the corresponding Rician fading reduces down to Rayleigh fading; if κ(s,d)→∞ or κ(r,d)k→∞, only the fixed LoS component exists. For ease of analysis, we assume that any two IRSs are either aligned or sufficiently far from each other so that the channel between them is ignored as illustrated in Fig. 1. In contrast with [4], we assume that the instantaneous NLoS components (i.e., ~h(s,d) and ~h(r,d)k,n

Considering practical implementation overhead, assume that the phase shifts θ do not change with the instantaneous NLoS components.

The receive signal at the destination can be expressed as

where SNR≜Pσ2 denotes the transmit SNR.

In this section, we analyze the outage probability Po(θ). Define

where gLoS(θ) is given by

follows non-central chi-squared distribution with 2 degrees of freedom. Therefore, we complete the proof.

Fig. 2 (a) and (b) plot the outage probability versus the phase shifts θ and the transmit SNR, respectively. We see from Fig. 2 that the analytical curves (i.e., Po(θ) in Theorem 1) are in excellent agreement with the numerical curves (i.e., Monte Carlo simulation results). Thus, Fig. 2 (a) and (b) verify Theorem 1. From Fig. 2, we can also see that Po(θ) decreases with the SNR, and changes significantly with θ, which motivates us to minimize Po(θ) with respect to θ.

In this section, we minimize the outage probability Po(θ) with respect to the phase shifts θ. First, the problem can be formulated as follows.

Next, we solve Problem 1.

Next, we characterize the impacts of K and Nk, k∈K on P∗o.

. In addition, the C.D.F. of a non-central chi-squared distribution decreases with the noncentrality parameter and increases with the upper limit of the value of the random variable. Thus, we can prove Lemma 1.

Lemma 1 indicates that P∗o decreases with the number of IRSs and with the number of elements of each IRS, if the power of each LoS component of the channel between each IRS and the destination is larger than the average power of the corresponding NLoS component. This can be seen from Fig. 3 (a) and (b). In addition, from Fig. 3 (a) and (b), we see that the optimal outage probability of the multi-IRS-assisted system is much smaller than that of the system without IRSs, especially at large K and Nk, k∈K.

where (a) is due to L’Hopital’s Rule, we have

Thus, by Theorem 2 (iii), we complete the proof.

Lemma 2 indicates that P∗o(SNR) is inversely proportional to the SNR in the high SNR regime. Fig. 4 (a) shows the asymptotically optimal outage probability versus the transmit SNR. We can see from Fig. 4 (a) that when SNR increases, the gap between each analytical curve (plotted using P∗o given in Theorem 2 (iii)) and the corresponding asymptotic curve (plotted using ~P∗o(SNR) given in Lemma 2) decreases, verifying Lemma 2. Furthermore, we also see that P∗o(SNR) in the high SNR regime and ~P∗o(SNR) are inversely proportional to the SNR.

Next, we characterize the impacts of κ(s,d),κ(r,d)k,k∈K on ~P∗o(SNR) in the high SNR regime.

We can easily show that ∂~P∗o(SNR)∂κ(s,d)<0 and ∂~P∗o(SNR)∂κ(r,d)k<0,k∈K. The details are omitted due to page limitation.

Lemma 3 indicates that ~P∗o(SNR) decreases with the power of each LoS component, as shown in Fig. 4 (b). In addition, from Fig. 4 (b), we can observe that ~P∗o(SNR) is much smaller than the asymptotic outage probability of the system without IRSs, especially at large κ(r,d)k,k∈K.