The numerical analysis for the small amplitude motion of an elastic beam with internal damping is investigated in domain with moving ends. An efficient numerical method is constructed to solve this moving boundary problem. The stability and convergence of the method is studied, and the errors of both the semi-discrete and fully-discrete schemes are derived, using Hermite's polynomials as a base function, proving that the method has order of quadratic convergence in space and time. Numerical simulations using the finite element method associated with the finite difference method (Newmark's method) are employed, for one-dimensional and two-dimensional cases. To validate the theoretical results, tables are shown comparing approximate and exact solutions. In addition, numerically the uniform decay rate for energy and the order of convergence of the approximate solution are also shown. 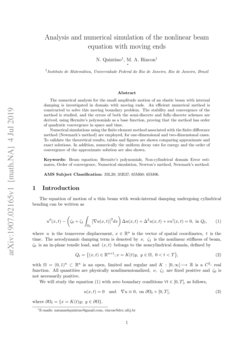 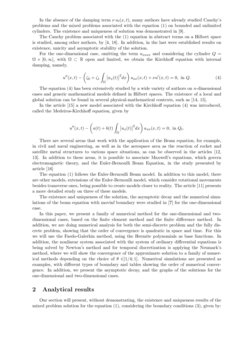 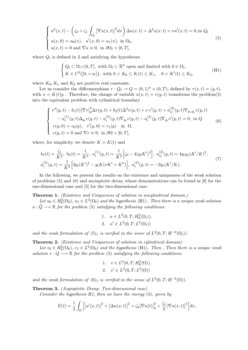 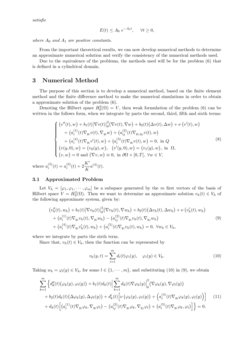 By using the Onsager principle as an approximation tool, we give a novel...
Xianmin Xu, et al. ∙

In this article, we have considered a nonlinear nonlocal time dependent ...
D. Adak, et al. ∙

The current paper is to investigate the numerical approximation of logis...
Lei Yang, et al. ∙

where u is the transverse displacement, x∈Rn

is the vector of spatial coordinates,

t is the time. The aerodynamic damping term is denoted by ν, ζ1 is the nonlinear stiffness of beam, ζ0 is an in-plane tensile load, and (x,t) belongs to the noncylindrical domain, defined by

with Ω=(0,1)n⊂Rn is an open, limited and regular and K:[0,∞[⟶R is a C2- real function. All quantities are physically nondimensionalized, ν, ζ1 are fixed positive and ζ0 is not necessarily positive.

We will study the equation (1) with zero boundary conditions ∀t∈[0,T[, as follows,

In the absence of the damping term ν ut(x,t), many authors have already studied Cauchy’s problems and the mixed problems associated with the equation (1) on bounded and unlimited cylinders. The existence and uniqueness of solution was demonstrated in [9].

The Cauchy problem associated with the (1) equation in abstract terms on a Hilbert space is studied, among other authors, by [4, 18]. In addition, in the last were established results on existence, unicity and asymptotic stability of the solution.

For the one-dimensional case, omitting the term uxxxx and considering the cylinder Q=Ω×[0,∞[, with Ω⊂R open and limited, we obtain the Kirchhoff equation with internal damping, namely,

The equation (4) has been extensively studied by a wide variety of authors on n-dimensional cases and generic mathematical models defined in Hilbert spaces. The existence of a local and global solution can be found in several physical-mathematical contexts, such as [14, 15].

There are several areas that work with the application of the Beam equation, for example, in civil and naval engineering, as well as in the aerospace area as the reaction of rocket and satellite metal structures to various space situations, as can be observed in the articles [12, 13]. In addition to these areas, it is possible to associate Maxwell’s equations, which govern electromagnetic theory, and the Euler-Bernoulli Beam Equation, in the study presented by article [16]

The equation (1) follows the Euler-Bernoulli Beam model. In addition to this model, there are other models, extensions of the Euler-Bernoulli model, which consider rotational movements besides transverse ones, being possible to create models closer to reality. The article [11] presents a more detailed study on three of these models.

The existence and uniqueness of the solution, the asymptotic decay and the numerical simulations of the beam equation with movinf boundary were studied in [Raquel] for the one-dimensional case.

In this paper, we present a family of numerical method for the one-dimensional and two-dimensional cases, based on the finite element method and the finite difference method. In addition, we are doing numerical analysis for both the semi-discrete problem and the fully discrete problem, showing that the order of convergence is quadratic in space and time. For this we will use the Faedo-Galerkin method, using the Hermite polynomials as base functions. In addition, the nonlinear system associated with the system of ordinary differential equations is being solved by Newton’s method and for temporal discretization is applying the Neumark’s method, where we will show the convergence of the approximate solution to a family of numerical methods depending on the choice of

θ∈]1/4;1]. Numerical simulations are presented as examples, with different types of boundary and tables showing the order of numerical convergence. In addition, we present the asymptotic decay, and the graphs of the solutions for the one-dimensional and two-dimensional cases.

Our section will present, without demonstrating, the existence and uniqueness results of the mixed problem solution for the equation (1), considering the boundary conditions (3), given by:

where Qt is defined in 2 and satisfying the hypotheses

where K0,K1 and K2 are positive real constants.

Let us consider the diffeomorphism τ:Qt→Q=(0,1)n×(0,T), defined by τ(x,t)=(y,t), with x=K(t)y . Therefore, the change of variable u(x,t)=v(y,t) transforms the problem(5) into the equivalent problem with cylindrical boundary

where, for simplicity, we denote K=K(t) and

In the following, we present the results on the existence and uniqueness of the weak solution of problems (5) and (6) and asymptotic decay, whose demonstrations can be found in [8] for the one-dimensional case and [5] for the two-dimensional case.

(Existence and Uniqueness of solution in nocylindrical domain.)

Let u0∈H20(Ω0), u1∈L2(Ω0) and the hypothesis (H1). Then there is a unique weak solution u:ˆQ⟶R for the problem (5) satisfying the following conditions:

(Existence and Uniqueness of solution in cylindrical domain)

Consider the hypothesis H1, then we have the energy (5), given by

where A0 and A1 are positive constants.

Due to the equivalence of the problems, the methods used will be for the problem (6) that is defined in a cylindrical domain.

The purpose of this section is to develop a numerical method, based on the finite element method and the finite difference method to make the numerical simulations in order to obtain a approximate solution of the problem (6).

Denoting the Hilbert space H20(Ω)=V, then weak formulation of the problem (6) can be written in the follows form, when we integrate by parts the second, third, fifth and sixth terms:

Let Vh=[φ1,φ1,⋯,φm] be a subspace generated by the m first vectors of the basis of Hilbert space V=H20(Ω). Then we want to determine an approximate solution vh(t)∈Vh of the following approximate system, given by:

where we integrate by parts the sixth term.

Since that, vh(t)∈Vh, then the function can be represented by

In order to validate the method (11), we add the term source (f(y,t),w) on the right side of the equation (9) and, taking w=φl, we have the following definitions for the matrices and vectors:

where we denote by ˆB the transpose of the matrix B.

Now, to solve the system of ordinary nonlinear equations (13) in discrete time, we will use the finite difference method.

In order, consider the discretize the fixed time interval [0,T], using a uniform time step of size Δt=T/N, then tη=ηΔt,  for η=0,1,⋯,N and χη=χ(⋅,tη). Consider the Neumark’s approximations:

Substituting the approximations in the system (13) and taking the equation in the discrete time t=tη=ηΔt , we obtain

To determine the solution vector dη=(dη1,dη2,⋯,dηm), we must now solve the algebraic system (17) and (16), for η=0,1,⋯,N. As the system is not linear, we will employ the Newton Method, which we briefly describe below, aiming at an optimization of the computational cost in the calculations.

For each η=1,2,⋯,N, consider F(X) the left side of the equation in (17). In this way, solve (17) is equivalent to finding the root of F(X). By Newton’s method, given the initial approximation and denoting X=dn+1,, we obtain Xk+1 a new approximate solution of F(X)=0, given by Xk+1=Xk+sk, where sk is the linear system solution JF(Xk)sk=−F(Xk). The key point of the method is the calculation of the Jacobian matrix JF(X). This is because, if it has a high computational cost, it can make the method unfeasible.

where d1k is the k-th coordinate of the initial velocity vector d1.

From there, we apply Newton’s refinement algorithm, for η=1,2,…,N−1, until one of the stopping criteria is satisfied: ∥Xk+1−Xk∥∞<10−14 or |F(Xk)|<10−14, where Xk is the solution obtained in the i-th iteration of Newton. We also define a maximum limit for iterations in order to avoid infinite refinements.

Let [Th] be a polygonalization family of Ω, where Th={K; K⊂Ω}, satisfying the minimum angle condition (see [7]) and indexed by the parameter h, representing the maximum diameter of the elements K∈Th. Given an integer l≥1, we introduce the following finite element space Vh

where V3h represents a finite-dimensional function space generated by piecewise polynomial Pl(K) functions of degree less or equal 3 associated with a discretization by finite elements of size h. In particular, in this paper we will use the Hermite polynomials of degree equal l=3.

Knowing the Hermite polynomials, then all the matrices of the system (16) can be calculated explicitly and solving the nonlinear system by Newton’s method gives the approximate solution, given by

Remarks on regularity: In order to get an error estimate, we require more regularity for the function v=v(y,t) and its derivatives in time:

4.1 Error estimates for the semi-discrete problem

The semi-discrete problem consists of finding vh: [0,T[⟶Vh such that satisfies the problem (8) restricted to w=wh∈Vh, that is, to find vh(t) for all t∈ ]0,T[ such that

For the estimates, we will need the following hypothesis about the projections of V in Vh, denoted by Rh and defined in (27), of the initial data

where RhΔv0, Rh∇v0 and Rhv1 are the projections of Δv0, ∇v0 and v1 in Vh, respectively, and c1,c2,c3≥0 are constants independent of h.

Let us assume that,

Let us denote by e(t)=v(t)−vh(t),∀t∈]0,T[, the error between the exact and approximate solution. Then, we have the following error estimate:

where the constant C is dependent on v and independent of h.