An unexpected unity among methods for interpreting model predictions

Understanding why a model made a certain prediction is crucial in many data science fields. Interpretable predictions engender appropriate trust and provide insight into how the model may be improved. However, with large modern datasets the best accuracy is often achieved by complex models even experts struggle to interpret, which creates a tension between accuracy and interpretability. Recently, several methods have been proposed for interpreting predictions from complex models by estimating the importance of input features. Here, we present how a model-agnostic additive representation of the importance of input features unifies current methods. This representation is optimal, in the sense that it is the only set of additive values that satisfies important properties. We show how we can leverage these properties to create novel visual explanations of model predictions. The thread of unity that this representation weaves through the literature indicates that there are common principles to be learned about the interpretation of model predictions that apply in many scenarios. 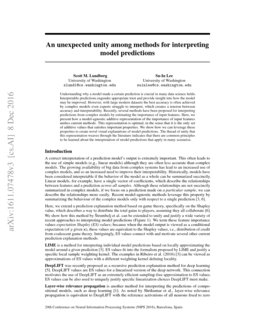 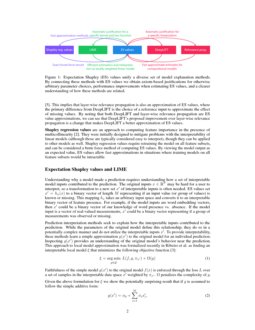 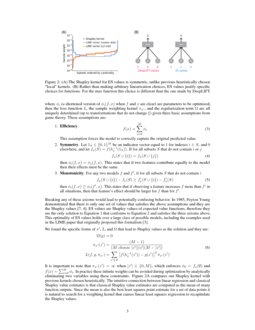 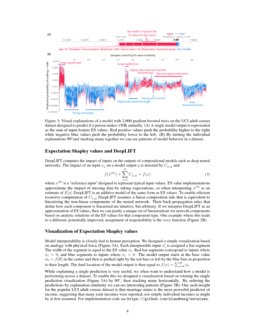 Understanding why a model makes a certain prediction can be as crucial a...
Scott Lundberg, et al. ∙

Why should you trust my interpretation? Understanding uncertainty in LIME predictions

As is typical in other fields of application of high throughput systems,...
Eric Wolsztynski, et al. ∙

A correct interpretation of a prediction model’s output is extremely important. This often leads to the use of simple models (e.g., linear models) although they are often less accurate than complex models. The growing availability of big data from complex systems has lead to an increased use of complex models, and so an increased need to improve their interpretability. Historically, models have been considered interpretable if the behavior of the model as a whole can be summarized succinctly. Linear models, for example, have a single vector of coefficients, which describe the relationships between features and a prediction

across all samples. Although these relationships are not succinctly summarized in complex models, if we focus on a prediction made on a particular sample, we can describe the relationships more easily. Recent model-agnostic methods leverage this property by summarizing the behaviour of the complex models only with respect to a single prediction ribeiro2016should; vstrumbelj2014explaining.

Here, we extend a prediction explanation method based on game theory, specifically on the Shapley value, which describes a way to distribute the total gains to players, assuming they all collaborate

vstrumbelj2014explaining. We show how this method by Štrumbelj et al. can be extended to unify and justify a wide variety of recent approaches to interpreting model predictions (Figure 1). We term these feature importance values expectation Shapley (ES) values; because when the model output is viewed as a conditional expectation (of y given x), these values are equivalent to the Shapley values, i.e., distribution of credit from coalescent game theory. Intriguingly, ES values connect with and motivate several other current prediction explanation methods:

LIME is a method for interpreting individual model predictions based on locally approximating the model around a given prediction ribeiro2016should. ES values fit into the formalism proposed by LIME and justify a specific local sample weighting kernel. The examples in Ribeiro et al. (2016) ribeiro2016should can be viewed as approximations of ES values with a different weighting kernel defining locality.

shrikumar2016not. DeepLIFT values are ES values for a linearized version of the deep network. This connection motivates the use of DeepLIFT as an extremely efficient sampling-free approximation to ES values. ES values can be also used to uniquely justify specific linearization choices DeepLIFT must make.

Layer-wise relevance propagation is another method for interpreting the predictions of compositional models, such as deep learning bach2015pixel

. As noted by Shrikumar et al., layer-wise relevance propagation is equivalent to DeepLIFT with the reference activations of all neurons fixed to zero

Shapley regression values are an approach to computing feature importance in the presence of multicollinearity lipovetsky2001analysis. They were initially designed to mitigate problems with the interpretability of linear models (although those are typically considered easy to interpret), though they can be applied to other models as well. Shapley regression values require retraining the model on all feature subsets, and can be considered a brute force method of computing ES values. By viewing the model output as an expected value, ES values allow fast approximations in situations where training models on all feature subsets would be intractable.

Faithfulness of the simple model g(x′) to the original model f(x) is enforced through the loss L over a set of samples in the interpretable data space x′ weighted by πx′. Ω penalizes the complexity of g.

Given the above formulation for ξ we show the potentially surprising result that if g is assumed to follow the simple additive form:

where ϕi (a shortened version of ϕi(f,x) when f and x

are clear) are parameters to be optimized, then the loss function

L, the sample weighting kernel πx′, and the regularization term Ω are all uniquely determined (up to transformations that do not change ξ) given three basic assumptions from game theory. These assumptions are:

Breaking any of these axioms would lead to potentially confusing behavior. In 1985, Peyton Young demonstrated that there is only one set of values that satisfies the above assumptions and they are the Shapley values young1985monotonic; roth1988shapley. ES values are Shapley values of expected value functions, therefore they are the only solution to Equation 1 that conforms to Equation 2 and satisfies the three axioms above. This optimality of ES values holds over a large class of possible models, including the examples used in the LIME paper that originally proposed this formalism ribeiro2016should.

We found the specific forms of x′, L, and Ω that lead to Shapley values as the solution and they are:

. In practice these infinite weights can be avoided during optimization by analytically eliminating two variables using these constraints. Figure 2A compares our Shapley kernel with previous kernels chosen heuristically. The intuitive connection between linear regression and classical Shapley value estimates is that classical Shapley value estimates are computed as the mean of many function outputs. Since the mean is also the best least squares point estimate for a set of data points it is natural to search for a weighting kernel that causes linear least squares regression to recapitulate the Shapley values.

DeepLIFT computes the impact of inputs on the outputs of compositional models such as deep neural networks. The impact of an input

xj on a model output y is denoted by Cxjy and

where x(0) is a "reference input" designed to represent typical input values. ES value implementations approximate the impact of missing data by taking expectations, so when interpreting x(0) as an estimate of E[x] DeepLIFT is an additive model of the same form as ES values. To enable efficient recursive computation of Cxjy DeepLIFT assumes a linear composition rule that is equivalent to linearizing the non-linear components of the neural network. Their back-propagation rules that define how each component is linearized are intuitive, but arbitrary. If we interpret DeepLIFT as an approximation of ES values, then we can justify a unique set of linearizations for network components based on analytic solutions of the ES values for that component type. One example where this leads to a different, potentially improved, assignment of responsibility is the max function (Figure 2B).

Model interpretability is closely tied to human perception. We designed a simple visualization based on analogy with physical force (Figure 3A). Each interpretable input x′i is assigned a bar segment. The width of the segment is equal to the ES value ϕi. Red bar segments correspond to inputs where ϕi>0, and blue segments to inputs where ϕi<0. The model output starts at the base value ϕ0=f(∅) in the center and then is pushed right by the red bars or left by the blue bars in proportion to their length. The final location of the model output is then equal to f(x)=∑Mi=0ϕi.

While explaining a single prediction is very useful, we often want to understand how a model is performing across a dataset. To enable this we designed a visualization based on rotating the single prediction visualization (Figure 3A) by 90°, then stacking many horizontally. By ordering the predictions by explanation similarity we can see interesting patterns (Figure 3B). One such insight for the popular UCI adult census dataset is that marriage status is the most powerful predictor of income, suggesting that many joint incomes were reported, not simply individual incomes as might be at first assumed. For implementation code see https://github.com/slundberg/esvalues.

Sample Efficiency and the Importance of the Shapley Kernel

Shapley values are classically defined by the impact of a feature when it is added to features that came before it in an ordering. The Shapley value for that feature is the average impact over all possible orderings:

where R is the set of all permutations of length P, and Bri is the set of all features whose index comes before i in permutation r. This leads to a natural estimation approach which involves taking the average over a small sample of all orderings vstrumbelj2014explaining

While the axioms presented above provide a compelling reason to use the Shapley kernel (Equation 6), it natural to wonder if any reasonable local weighting kernel would produce results similar to the Shapley kernel. It turns out this is not the case, and the Shapley kernel significantly effects how we attribute non-linear effects to various features when compared to the standard exponential kernel used by LIME. For the sparse decision tree used above there is a noticeable change in the magnitude of feature impacts (Figure 4B), and for the dense decision tree we even see the direction of estimated effects reversed (Figure 4A).