The orthogonal least squares (OLS) algorithm is popularly used in sparse recovery, subset selection, and function approximation. In this paper, we analyze the performance guarantee of OLS. Specifically, we show that if a sampling matrix Φ has unit ℓ_2-norm columns and satisfies the restricted isometry property (RIP) of order K+1 with δ_K+1 <C_K = 1/√(K), K=1, 1/√(K+1/4), K=2, 1/√(K+1/16), K=3, 1/√(K), K > 4, then OLS exactly recovers any K-sparse vector x from its measurements y = Φx in K iterations. Furthermore, we show that the proposed guarantee is optimal in the sense that OLS may fail the recovery under δ_K+1> C_K. Additionally, we show that if the columns of a sampling matrix are ℓ_2-normalized, then the proposed condition is also an optimal recovery guarantee for the orthogonal matching pursuit (OMP) algorithm. Also, we establish a recovery guarantee of OLS in the more general case where a sampling matrix might not have unit ℓ_2-norm columns. Moreover, we analyze the performance of OLS in the noisy case. Our result demonstrates that under a suitable constraint on the minimum magnitude of nonzero elements in an input signal, the proposed RIP condition ensures OLS to identify the support exactly. 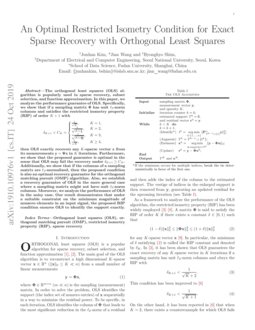 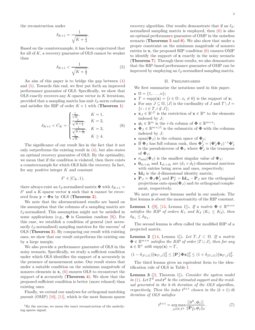 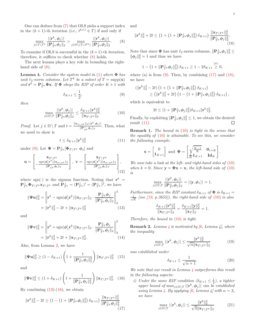 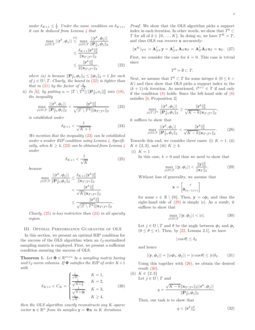 Given an overcomplete dictionary A and a signal b = Ac^* for some sparse...
Daniel P. Robinson, et al. ∙

Orthogonal least squares (OLS) is a popular algorithm for sparse recovery, subset selection, and function approximation [1, 2]. The main goal of the OLS algorithm is to reconstruct a high dimensional K-sparse vector x∈Rn (∥x∥0≤K≪n) from a small number of linear measurements

where Φ∈Rm×n (m≪n) is the sampling (measurement) matrix. In order to solve the problem, OLS identifies the support (the index set of nonzero entries) of x sequentially in a way to minimize the residual power. To be specific, in each iteration, OLS identifies the column of Φ that leads to the most significant reduction in the ℓ2

-norm of a residual and then adds the index of the column to the estimated support. The vestige of indices in the enlarged support is then removed from

y, generating an updated residual for the upcoming iteration (see Table I).

As a framework to analyze the performance of the OLS algorithm, the restricted isometry property (RIP) has been widely employed [4, 5, 3, 6, 7, 8]. A matrix Φ is said to satisfy the RIP of order K if there exists a constant δ∈[0,1) such that

for any K-sparse vector x [9]. In particular, the minimum of δ satisfying (2) is called the RIP constant and denoted by δK. In [3], it has been shown that OLS guarantees the exact recovery of any K-sparse vector in K iterations if a sampling matrix has unit ℓ2-norm columns and obeys the RIP with

This condition has been improved to [6]

On the other hand, it has been reported in [6] that when K=2, there exists a counterexample for which OLS fails the reconstruction under

Based on the counterexample, it has been conjectured that for all of K, a recovery guarantee of OLS cannot be weaker than

An aim of this paper is to bridge the gap between (4) and (5). Towards this end, we first put forth an improved performance guarantee of OLS. Specifically, we show that OLS exactly recovers any K-sparse vector in K iterations, provided that a sampling matrix has unit ℓ2-norm columns and satisfies the RIP of order K+1 with (Theorem 1)

The significance of our result lies in the fact that it not only outperforms the existing result in (4), but also states an optimal recovery guarantee of OLS. By the optimality, we mean that if the condition is violated, then there exists a counterexample for which OLS fails the recovery. In fact, for any positive integer K and constant

there always exist an ℓ2-normalized matrix Φ with δK+1=δ∗ and a K-sparse vector x such that x cannot be recovered from y=Φx by OLS (Theorem 2).

We note that the aforementioned results are based on the assumption that the columns of a sampling matrix are ℓ2-normalized. This assumption might not be satisfied in some applications (e.g., Φ is Gaussian random [9]). For this case, we establish a condition of general (not necessarily ℓ2-normalized) sampling matrices for the success111By the success, we mean the exact reconstruction of the underlying sparse signal. of OLS (Theorem 3). By comparing our result with existing ones, we show that our result outperforms the existing one by a large margin.

We also provide a performance guarantee of OLS in the noisy scenario. Specifically, we study a sufficient condition under which OLS identifies the support of x accurately in the presence of measurement noise. Our result states that under a suitable condition on the minimum magnitude of nonzero elements in x, (6) ensures OLS to reconstruct the support of x accurately (Theorem 4). We show that the proposed sufficient condition is better (more relaxed) than existing ones.

Finally, we extend our analyses for orthogonal matching pursuit (OMP) [10, 11], which is the most famous sparse recovery algorithm. Our results demonstrate that if an ℓ2-normalized sampling matrix is employed, then (6) is also an optimal performance guarantee of OMP in the noiseless scenario (Theorems 5 and 6). We also show that under a proper constraint on the minimum magnitude of nonzero entries in x, the proposed RIP condition (6) ensures OMP to identify the support of x exactly in the noisy scenario (Theorem 7). Through these results, we also demonstrate that the RIP-based performance guarantee of OMP can be improved by employing an ℓ2-normalized sampling matrix.

We first summarize the notations used in this paper.

We next give some lemmas useful in our analysis. The first lemma is about the monotonicity of the RIP constant.

The second lemma is often called the modified RIP of a projected matrix.

The third lemma gives an equivalent form to the identification rule of OLS in Table I.

Consider the system model in (1). Let Tk and rk be the estimated support and the residual generated in the k-th iteration of the OLS algorithm, respectively. Then the index tk+1 chosen in the (k+1)-th iteration of OLS satisfies

To examine if OLS is successful in the (k+1)-th iteration, therefore, it suffices to check whether (8) holds.

The next lemma plays a key role in bounding the right-hand side of (8).

Consider the system model in (1) where Φ has unit ℓ2-norm columns. Let Tk be a subset of T=\operatornamewithlimitssupp(x) and rk=P⊥TkΦx. If Φ obeys the RIP of order K+1 with

Let j∈Ω∖T and t=∥xT∖Tk∥2|⟨rk,ϕj⟩|∥P⊥Tkϕj∥2. Then, what we need to show is

Also, from Lemma 2, we have

Note that since Φ has unit ℓ2-norm columns, ∥P⊥Tkϕj∥22≤∥ϕj∥22=1 and thus we have

Finally, by exploiting ∥P⊥Tkϕj∥22≤1, we obtain the desired result (11). ∎

The bound in (10) is tight in the sense that the equality of (10) is attainable. To see this, we consider the following example:

Lemma 4 is motivated by [6, Lemma 4], where the inequality

We note that our result in Lemma 4 outperforms this result in the following aspects:

Let Φ∈Rm×n be a sampling matrix having unit ℓ2-norm columns. If Φ satisfies the RIP of order K+1 with

then the OLS algorithm exactly reconstructs any K-sparse vector x∈Rn from its samples y=Φx in K iterations.

We show that the OLS algorithm picks a support index in each iteration. In other words, we show that Tk⊂T for all of k∈{0,…,K}. In doing so, we have TK=T, and thus OLS can recover x accurately:

First, we consider the case for k=0. This case is trivial since

Next, we assume that Tk⊂T for some integer k (0≤k<K) and then show that OLS picks a support index in the (k+1)-th iteration. As mentioned, tk+1∈T if and only if the condition (8) holds. Since the left-hand side of (8) satisfies [6, Proposition 2]

it suffices to show that

There have been previous efforts to analyze a recovery guarantee of the OLS algorithm [3, 6, 7, 8]. So far, the best result states that OLS guarantees the exact reconstruction under [6, Theorem 1]

Clearly, the proposed guarantee (26) is less restrictive than this condition in all sparsity region. One might wonder about the key difference between our analysis and previous ones. One major concern in the analysis of OLS lies in dealing with the denominator term ∥P⊥Tkϕj∥2 in (7), and various efforts have been made to handle this term. In [3, eq. (E.7)], the inequality

was developed and employed to establish (3). This inequality was recently improved to [6, 16]

which leads to the improved performance guarantee (38). While previous studies have focused on constructing a tight lower bound of ∥P⊥Tkϕj∥2 and using the bound as an estimate of ∥P⊥Tkϕj∥2, we do not approximate this term to prevent the loss, if any, caused by its relaxation. In fact, by properly defining some vectors incorporated with ∥P⊥Tkϕj∥2 (e.g., u and v in (12)), the inequality (10) could be obtained without any relaxation on ∥P⊥Tkϕj∥2, which eventually leads us to obtain the improved guarantee (26).

We now demonstrate that the proposed guarantee (26) is optimal. This argument is established by showing that if δK+1≥CK, then there exists a counterexample for which OLS fails the recovery.

For any positive integer K and constant

there always exist an ℓ2-normalized matrix Φ with δK+1=δ∗ and a K-sparse vector x such that the OLS algorithm fails to recover x from y=Φx in K iterations.