We consider the closely related problems of bandit convex optimization with two-point feedback, and zero-order stochastic convex optimization with two function evaluations per round. We provide a simple algorithm and analysis which is optimal for convex Lipschitz functions. This improves on dujww13, which only provides an optimal result for smooth functions; Moreover, the algorithm and analysis are simpler, and readily extend to non-Euclidean problems. The algorithm is based on a small but surprisingly powerful modification of the gradient estimator. 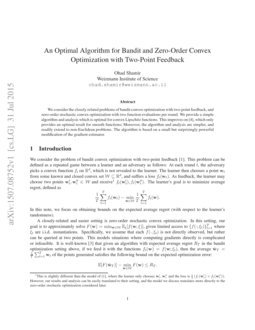 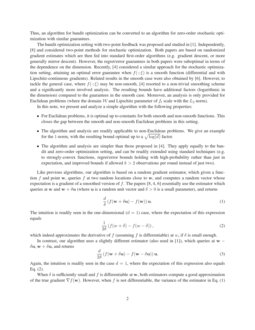 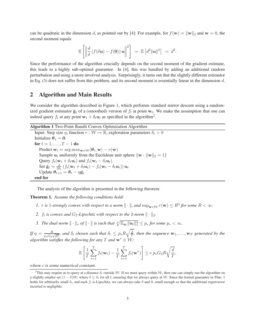 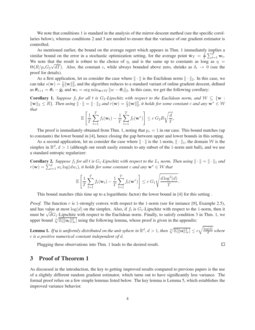 We consider the problem of bandit convex optimization with two-point feedback [1]. This problem can be defined as a repeated game between a learner and an adversary as follows: At each round t, the adversary picks a convex function ft on Rd, which is not revealed to the learner. The learner then chooses a point wt from some known and closed convex set W⊆Rd, and suffers a loss ft(wt). As feedback, the learner may choose two points w′t,w′′t∈W and receive111This is slightly different than the model of [1], where the learner only chooses w′t,w′′t and the loss is 12(ft(w′t)+ft(w′′t)). However, our results and analysis can be easily translated to their setting, and the model we discuss translates more directly to the zero-order stochastic optimization considered later. ft(w′t),ft(w′′t). The learner’s goal is to minimize average regret, defined as

In this note, we focus on obtaining bounds on the expected average regret (with respect to the learner’s randomness).

A closely-related and easier setting is zero-order stochastic convex optimization. In this setting, our goal is to approximately solve F(w)=minw∈WEξ[f(w;ξ)], given limited access to {f(⋅;ξt)}Tt=1 where ξt are i.i.d. instantiations. Specifically, we assume that each f(⋅,ξt) is not directly observed, but rather can be queried at two points. This models situations where computing gradients directly is complicated or infeasible. It is well-known [3] that given an algorithm with expected average regret RT in the bandit optimization setting above, if we feed it with the functions ft(w)=f(w;ξt), then the average ¯wT=1T∑Tt=1wt of the points generated satisfies the following bound on the expected optimization error:

The bandit optimization setting with two-point feedback was proposed and studied in [1]. Independently, [8] and considered two-point methods for stochastic optimization. Both papers are based on randomized gradient estimates which are then fed into standard first-order algorithms (e.g. gradient descent, or more generally mirror descent). However, the regret/error guarantees in both papers were suboptimal in terms of the dependence on the dimension. Recently, [4] considered a similar approach for the stochastic optimization setting, attaining an optimal error guarantee when f(⋅;ξ) is a smooth function (differential and with Lipschitz-continuous gradients). Related results in the smooth case were also obtained by [6]. However, to tackle the general case, where f(⋅;ξ) may be non-smooth, [4] resorted to a non-trivial smoothing scheme and a significantly more involved analysis. The resulting bounds have additional factors (logarithmic in the dimension) compared to the guarantees in the smooth case. Moreover, an analysis is only provided for Euclidean problems (where the domain W and Lipschitz parameter of ft scale with the L2 norm).

In this note, we present and analyze a simple algorithm with the following properties:

Like previous algorithms, our algorithm is based on a random gradient estimator, which given a function f and point w, queries f at two random locations close to w

, and computes a random vector whose expectation is a gradient of a smoothed version of

f. The papers [8, 4, 6] essentially use the estimator which queries at w and w+δu (where u is a random unit vector and δ>0 is a small parameter), and returns

The intuition is readily seen in the one-dimensional (d=1) case, where the expectation of this expression equals

which indeed approximates the derivative of f (assuming f is differentiable) at w, if δ is small enough.

In contrast, our algorithm uses a slightly different estimator (also used in [1]), which queries at w−δu,w+δu, and returns

Again, the intuition is readily seen in the case d=1, where the expectation of this expression also equals Eq. (2).

When δ is sufficiently small and f is differentiable at w, both estimators compute a good approximation of the true gradient ∇f(w). However, when f

is not differentiable, the variance of the estimator in Eq. (

Since the performance of the algorithm crucially depends on the second moment of the gradient estimate, this leads to a highly sub-optimal guarantee. In [4], this was handled by adding an additional random perturbation and using a more involved analysis. Surprisingly, it turns out that the slightly different estimator in Eq. (3) does not suffer from this problem, and its second moment is essentially linear in the dimension d.

We consider the algorithm described in Figure 1, which performs standard mirror descent using a randomized gradient estimator ~gt of a (smoothed) version of ft at point wt. We make the assumption that one can indeed query ft at any point wt+δtut as specified in the algorithm222This may require us to query at a distance δt outside W. If we must query within W, then one can simply run the algorithm on a slightly smaller set (1−δ)W, where δ≥δt for all t, ensuring that we always query at W. Since the formal guarantee in Thm. 1 holds for arbitrarily small δt, and each ft is Lipschitz, we can always take δ and δt small enough so that the additional regret/error incurred is negligible..

The analysis of the algorithm is presented in the following theorem:

If η=Rp∗G2√dT, and δt chosen such that δt≤p∗R√dT, then the sequence w1,…,wT generated by the algorithm satisfies the following for any T and w∗∈W:

where c is some numerical constant.

We note that conditions 1 is standard in the analysis of the mirror-descent method (see the specific corollaries below), whereas conditions 2 and 3 are needed to ensure that the variance of our gradient estimator is controlled.

As mentioned earlier, the bound on the average regret which appears in Thm. 1 immediately implies a similar bound on the error in a stochastic optimization setting, for the average point ¯wT=1T∑Tt=1wt. We note that the result is robust to the choice of η, and is the same up to constants as long as η=Θ(R/p∗G2√dT). Also, the constant c, while always bounded above zero, shrinks as δt→0 (see the proof for details).

As a first application, let us consider the case where ∥⋅∥ is the Euclidean norm ∥⋅∥2. In this case, we can take s(w)=12∥w∥22, and the algorithm reduces to a standard variant of online gradient descent, defined as θt+1=θt−~gt and wt=argminw∈W∥w−θt∥2. In this case, we get the following corollary:

Suppose ft for all t is G2-Lipschitz with respect to the Euclidean norm, and W⊆{w:∥w∥2≤R}. Then using ∥⋅∥=∥⋅∥2 and r(w)=12∥w∥22, it holds for some constant c and any w∗∈W that

The proof is immediately obtained from Thm. 1, noting that p∗=1 in our case. This bound matches (up to constants) the lower bound in [4], hence closing the gap between upper and lower bounds in this setting.

As a second application, let us consider the case where ∥⋅∥ is the 1-norm, ∥⋅∥1, the domain W is the simplex in Rd, d>1 (although our result easily extends to any subset of the 1-norm unit ball), and we use a standard entropic regularizer:

Suppose ft for all t is G1-Lipschitz with respect to the L1 norm. Then using ∥⋅∥=∥⋅∥1 and r(w)=∑di=1wilog(dwi), it holds for some constant c and any w∗∈W that

This bound matches (this time up to a logarithmic factor) the lower bound in [4] for this setting .

is uniformly distributed on the unit sphere in

Plugging these observations into Thm. 1 leads to the desired result. ∎

As discussed in the introduction, the key to getting improved results compared to previous papers is the use of a slightly different random gradient estimator, which turns out to have significantly less variance. The formal proof relies on a few simple lemmas listed below. The key lemma is Lemma 5, which establishes the improved variance behavior.

For any w∗∈W, it holds that

This lemma is the canonical result on the convergence of online mirror descent, and the proof is standard (see e.g. [9]).

over W, where ut is a vector picked uniformly at random from the Euclidean unit sphere. Then the function is convex, Lipschitz with constant G2, satisfies

and is differentiable with the following gradient:

The fact that the function is convex and Lipschitz is immediate from its definition and the assumptions in the theorem. The inequality follows from ut being a unit vector and that ft is assumed to be G2-Lipschitz with respect to the 2-norm. The differentiability property follows from Lemma 2.1 in [5]. ∎

For any function g which is L-Lipschitz with respect to the 2-norm, it holds that if u is uniformly distributed on the Euclidean unit sphere, then

for some numerical constant c.

which equals cL2/d for some numerical constant c. ∎

For simplicity of notation, we drop the t subscript. Since u has a symmetric distribution around the origin,

As to the second part of the lemma, we have the following, where α is an arbitrary parameter and where we use the elementary inequality (a−b)2≤2(a2+b2).

Again using the symmetrical distribution of u, this equals

Applying Cauchy-Schwartz and using the condition 4√Eu∥u∥4∗≤p∗ stated in the theorem, we get the upper bound

We are now ready to prove the theorem. Taking expectations on both sides of the inequality in Lemma 2, we have

Using Lemma 5, the right hand side is at most

By Lemma 3, this is at least

Combining these inequalities and plugging back into Eq. (4), we get

Dividing both sides by T, the result follows.

Finally, for any value of n, we always have ∥n∥∞∥n∥2≤1, since the Euclidean norm is always larger than the infinity norm. Combining these observations, and using 1A for the indicator function of the event A, we have

Thus, it remains to upper bound E[∥n∥4∞] where n

n=(n1,…,nd), and noting that n1,…,nd are independent and identically distributed standard Gaussian random variables, we have for any scalar z≥1 that

where (1) is Bernoulli’s inequality, and (2) is using a standard tail bound for a Gaussian random variable. In particular, the above implies that