In this paper we formulate the nonnegative matrix factorisation (NMF) problem as a maximum likelihood estimation problem for hidden Markov models and propose online expectation-maximisation (EM) algorithms to estimate the NMF and the other unknown static parameters. We also propose a sequential Monte Carlo approximation of our online EM algorithm. We show the performance of the proposed method with two numerical examples. 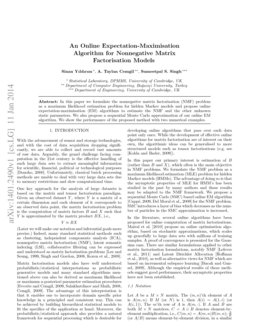 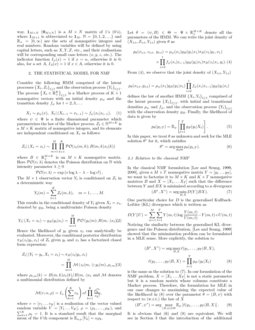 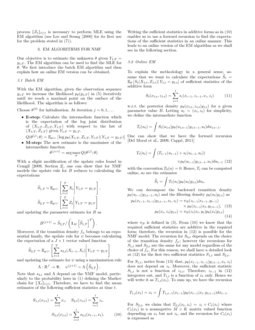 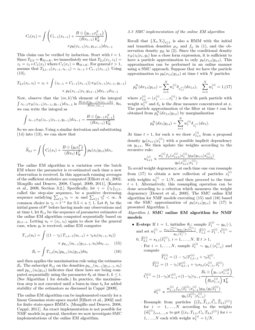 With the advancement of sensor and storage technologies, and with the cost of data acquisition dropping significantly, we are able to collect and record vast amounts of raw data. Arguably, the grand challenge facing computation in the 21st century is the effective handling of such large data sets to extract meaningful information for scientific, financial, political or technological purposes (Donoho, 2000). Unfortunately, classical batch processing methods are unable to deal with very large data sets due to memory restrictions and slow computational time.

One key approach for the analysis of large datasets is based on the matrix and tensor factorisation paradigm. Given an observed dataset

Y, where Y is a matrix of a certain dimension and each element of it corresponds to an observed data point, the matrix factorisation problem is the computation of matrix factors B and X such that Y is approximated by the matrix product BX, i.e.,

Matrix factorisation models also have well understood probabilistic/statistical interpretations as probabilistic generative models and many standard algorithms mentioned above can also be derived as maximum likelihood or maximum a-posteriori parameter estimation procedures (Fevotte and Cemgil, 2009; Salakhutdinov and Mnih, 2008; Cemgil, 2009). The advantage of this interpretation is that it enables one to incorporate domain specific prior knowledge in a principled and consistent way. This can be achieved by building hierarchical statistical models to fit the specifics of the application at hand. Moreover, the probabilistic/statistical approach also provides a natural framework for sequential processing which is desirable for developing online algorithms that pass over each data point only once. While the development of effective online algorithms for matrix factorisation are of interest on their own, the algorithmic ideas can be generalised to more structured models such as tensor factorisations (e.g. see (Kolda and Bader, 2009)).

In this paper our primary interest is estimation of B (rather than B and X), which often is the main objective in NMF problems. We formulate the NMF problem as a maximum likelihood estimation (MLE) problem for hidden Markov models (HMMs). The advantage of doing so is that the asymptotic properties of MLE for HMM’s has been studied in the past by many authors and these results may be adapted to the NMF framework. We propose a sequential Monte Carlo (SMC) based online EM algorithm (Cappé, 2009; Del Moral et al., 2009) for the NMF problem. SMC introduces a layer of bias which decreases as the number of particles in the SMC approximation is increased.

In the literature, several online algorithms have been proposed for online computation of matrix factorisations. Mairal et al. (2010) propose an online optimisation algorithm, based on stochastic approximations, which scales up gracefully to large data sets with millions of training samples. A proof of convergence is presented for the Gaussian case. There are similar formulations applied to other matrix factorisation formulations, notably NMF (Lefevre et al., 2011) and Latent Dirichlet Allocation (Hoffman et al., 2010), as well as alternative views for NMF which are based on incremental subspace learning (Bucak and Gunsel, 2009). Although the empirical results of these methods suggest good performance, their asymptotic properties have not been established.

are the sets of nonnegative integers and real numbers. Random variables will be defined by using capital letters, such as

2 The Statistical Model for NMF

Consider the following HMM comprised of the latent processes {Xt,Zt}t≥1 and the observation process {Yt}t≥1. The process {Xt∈RK+}t≥1 is a Markov process of K×1

nonnegative vectors with an initial density

where ψ∈Ψ is a finite dimensional parameter which parametrizes the law of the Markov process. Zt∈NM×K is a M×K matrix of nonnegative integers, and its elements are independent conditioned on Xt as follows:

denotes the Poisson distribution on

This results in the conditional density of Yt given Xt=xt, denoted by gB, being a multivariate Poisson density

Hence the likelihood of yt given xt can analytically be evaluated. Moreover, the conditional posterior distribution πB(zt|yt,xt) of Zt given yt and xt has a factorized closed form expression:

where ρt,m(k)=B(m,k)xt(k)/B(m,⋅)xt and M denotes a multinomial distribution defined by

defines the law of another HMM {Xt,Yt}t≥1 comprised of the latent process {Xt}t≥1, with initial and transitional densities μψ and fψ, and the observation process {Yt}t≥1 with the observation density gB. Finally, the likelihood of data is given by

In this paper, we treat θ as unknown and seek for the MLE solution θ∗ for it, which satisfies

2.1 Relation to the classical NMF

In the classical NMF formulation (Lee and Seung, 1999, 2000), given a M×T nonnegative matrix Y=[y1…yT], we want to factorize it to M×K and K×T nonnegative matrices B and X=[X1…XT] such that the difference between Y and BX is minimised according to a divergence

Noticing the similarity between the generalised KL divergence and the Poisson distribution, (Lee and Seung, 1999) showed that the minimisation problem can be formulated in a MLE sense. More explicitly, the solution to

is the same as the solution to (7). In our formulation of the NMF problem, X=[X1…XT]

is not a static parameter but it is a random matrix whose columns constitute a Markov process. Therefore, the formulation for MLE in our case changes to maximising the expected value of the likelihood in (

It is obvious that (6) and (9) are equivalent. We will see in Section 3 that the introduction of the additional process {Zt}t≥1 is necessary to perform MLE using the EM algorithm (see Lee and Seung (2000) for its first use for the problem stated in (7)).

Our objective is to estimate the unknown θ given Y1:T=y1:T. The EM algorithm can be used to find the MLE for θ. We first introduce the batch EM algorithm and then explain how an online EM version can be obtained.

With the EM algorithm, given the observation sequence y1:T we increase the likelihood pθ(y1:T) in (5) iteratively until we reach a maximal point on the surface of the likelihood. The algorithm is as follows:

With a slight modification of the update rules found in Cemgil (2009, Section 2), one can show that for NMF models the update rule for B reduces to calculating the expectations

and updating the parameter estimate for B as

Moreover, if the transition density fψ belongs to an exponential family, the update rule for ψ becomes calculating the expectation of a J×1 vector valued function

and updating the estimate for ψ using a maximisation rule

Note that s3,t and Λ

depend on the NMF model, particularly to the probability laws in (

) defining the Markov chain for

{Xt}t≥1. Therefore, we have to find the mean estimates of the following sufficient statistics at time t.

To explain the methodology in a general sense, assume that we want to calculate the expectations ˆSt=Eθ[St(X1:t,Z1:t)|Y1:t=y1:t] of sufficient statistics of the additive form

w.r.t. the posterior density pθ(x1:t,z1:t|y1:t) for a given parameter value B. Letting ut=(xt,zt) for simplicity, we define the intermediate function

with the convention T0(u)=0. Hence, Tt can be computed online, so are the estimates

where πB is defined in (3). From (3.1) we know that the required sufficient statistics are additive in the required form; therefore, the recursion in (12) is possible for the NMF model. The recursion for S3,t depends on the choice of the transition density fψ; however the recursions for S1,t and S2,t are the same for any model regardless of the choice of fψ. For this reason, we shall have a detailed look at (12) for the first two sufficient statistics S1,t and S2,t.

For S2,t, we claim that T2,t(xt,zt)=zt+Ct(xt) where Ct(xt) is a nonnegative M×K matrix valued function depending on xt but not zt, and the recursion for Ct(xt) is expressed as

So we are done. Using a similar derivation and substituting (14) into (3.2), we can show that

The online EM algorithm is a variation over the batch EM where the parameter is re-estimated each time a new observation is received. In this approach running averages of the sufficient statistics are computed (Elliott et al., 2002; Mongillo and Deneve, 2008; Cappé, 2009, 2011), (Kantas et al., 2009, Section 3.2.). Specifically, let γ={γt}t≥1, called the step-size sequence, be a positive decreasing sequence satisfying ∑t≥1γt=∞ and ∑t≥1γ2t<∞. A common choice is γt=t−a for 0.5<a≤1. Let θ1 be the initial guess of θ∗ before having made any observations and at time t, let θ1:t be the sequence of parameter estimates of the online EM algorithm computed sequentially based on y1:t−1. Letting ut=(xt,zt) again to show for the general case, when yt is received, online EM computes

and then applies the maximisation rule using the estimates St. The subscript θ1:t on the densities pθ1:t(ut−1|y1:t−1,ut) and pθ1:t(ut|y1:t) indicates that these laws are being computed sequentially using the parameter θk at time k, k≤t. (See Algorithm 3.3 for details.) In practice, the maximisation step is not executed until a burn-in time tb for added stability of the estimators as discussed in Cappé (2009).

where x(i)1:t=(x(i)1,…,x(i)t) is the n’th path particle with weight w(i)t and δx is the dirac measure concentrated at x. The particle approximation of the filter at time t can be obtained from pNθ(dx1:t|y1:t) by marginalization

At time t+1, for each n we draw x(i)t+1 from a proposal density qθ(xt+1|x(i)t) with a possible implicit dependency on yt+1. We then update the weights according to the recursive rule:

To avoid weight degeneracy, at each time one can resample from (17) to obtain a new collection of particles x(i)t with weights w(i)t=1/N, and then proceed to the time t+1. Alternatively, this resampling operation can be done according to a criterion which measures the weight degeneracy (Doucet et al., 2000). The SMC online EM algorithm for NMF models executing (3.2) and (16) based on the SMC approximation of pθ(x1:t|y1:t) in (17) is presented Algorithm 3.3. SMC online EM algorithm for NMF models

Algorithm 3.3 is a special application of the SMC online EM algorithm proposed in Cappé (2009) for a general state-space HMM, and it only requires O(N) computations per time step. Alternatively, one can implement an O(N2) SMC approximation to the online EM algorithm, see Del Moral et al. (2009) for its merits and demerits over the current O(N) implementation. The O(N2) is made possible by plugging the following SMC approximation to pθ(xt−1|xt,y1:t−1) into (12)

In this simple basis selection model, Xt∈{0,1}K determines which columns of B are selected to contribute to the intensity of the Poisson distribution for observations. For k=1,…,K,

4.2 A relaxation of the multiple basis selection model

When α is close to 1, the process will spend most of its time around 0 and 1 with a strong correlation. (Figure 2 shows a realisation of {Xt(1)}t≥1 for 500 time steps when α=0.95.) For estimation of α, one needs to calculate