An Online Algorithm for Nonparametric Correlations 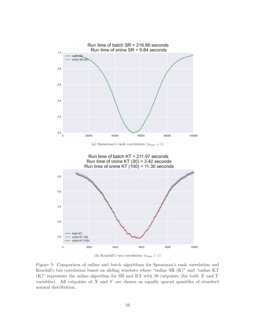 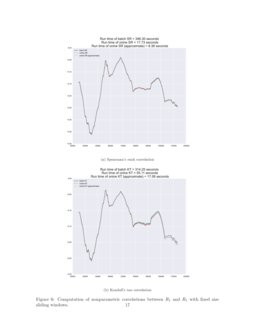 Robust statistics and related methods are widely applied in a variety of fields [1, 2, 3, 4]

. Nonparametric correlations such as Spearman’s rank (SR) correlation and Kendall’s tau (KT) correlation are commonly used robust statistics. They are often used as a replacement of the classic Pearson correlation to measure the relationship between two random variables when the data contain outliers or come from heavy-tailed distributions. Applications include estimating the correlation structure of financial returns

[5], comparing diets in fish [6], and studying the relationship between summer temperature and latewood density in trees [7].

Nonparametric correlations have the following beneficial properties that standard Pearson correlation does not possess. First, nonparametric correlations can work on incomplete data (where only ordinal information of the data is available). Second, SR and KT equal 1 when Y is a monotonically increasing function of X. Third, SR and KT are more robust against outliers or heavy-tailed errors. The latter two properties are demonstrated in Figure 1. Previous works have shown that the influence function of Pearson correlation is unbounded whereas the influence functions of SR and KT are both bounded [8, 9]

One drawback of SR and KT compared with Pearson correlation is that they require more computational time. The computation of SR and KT requires sorting (finding rank) of the X and Y sequences, which is a very time-consuming step when the sample size n is large. The minimum time complexities for batch algorithms for SR and KT are O(nlogn) [10], whereas the time complexity for batch algorithm of Pearson correlation is O(n).

In practice you sometimes would want to analyze correlation between variables in dynamic environments, where the data are streaming in. These environments include network monitoring, sensor networks, and financial analysis. A good algorithm should make it easy to incorporate new data and process the input sequence in a serial fashion. Such algorithms are called online algorithms in this paper. Online algorithms have interesting applications in various fields [11, 12, 13, 14]. A standard online algorithm exists to compute Pearson correlation by using the idea of sufficient statistics [13]. The time complexity of this algorithm is O(1), and its memory cost is also O(1). However, because Pearson correlation is not robust against outliers, it is not the desirable method for some applications, for example, suppose you collect data from a huge sensor network of a complex system and you want to analyze the correlation in order to detect highly correlated sensor pairs. Outliers in sensor readings might occur because of noise, different temperature conditions, or failures of sensors or communication. Pearson correlation would not be robust enough to handle such an analysis.

This type of analysis demonstrates the need for an online algorithm for nonparametric correlations (such as SR and KT). However, the way the Pearson correlation is computed cannot be directly carried over to SR and KT. It cannot be carried over for SR because new data can change the ranks of all historical observations that were used to compute the correlation. For KT on the other hand, new data need to be compared with all historical data in the computation of the correlation. In order to compute SR and KT with streaming data exactly, it is necessary to keep all previous history in memory, which is impossible because the data streams can be unbounded in length.

The main idea in designing the online algorithms for nonparametric correlations is to coarsen the bivariate distribution of (X,Y

). The coarsened joint distribution can represented by using a small matrix. Assume that both

are continuous random variables. You provide

m∗1 and m∗2 distinct cutpoints in ascending order for X and Y respectively, where both m∗1 and m∗2 are nonnegative integers. The cutpoints for X are denoted as (cx1,…,cxm∗1)\tiny{\sf T}, where cx1<cx2<…<cxm∗1. Similarly, the cutpoints for Y are represented as (cy1,…,cym∗2)\tiny{\sf T}. Two default cutpoints are added for X: cx0 and cxm∗1+1, where cx0=−∞ and cxm∗1+1=∞. Cutpoints {cxi,i=0…,m∗1+1} discretize X into m1 ranges, where m1=m∗1+1. The same is done for Y, and cutpoints {cyi,i=0…,m∗2+1} discretize Y into m2 ranges, where m2=m∗2+1. The m1×m2 count matrix M is then constructed, where M[i,j] stores the number of observations that falls into the range [cxi−1,cxi)×[cyj−1,cyj). An example of an M matrix is shown in Figure 2, where three cutpoints are chosen for X and four cutpoints are chosen for Y. Using the count matrix M has two advantages: first, instead of entire (xi,yi) series (which maybe unbounded in length) being stored,the information is stored in a matrix of fixed size. Second, when (xi,yi) are discretized and stored in M, they are naturally sorted, and fast algorithms exist to quickly compute rSR and rKT from M. This paper proves that the time complexity of the algorithms is O(m1m2) for both Spearman’s rank correlation and Kendall’s tau correlation. Because both m1 and m2 are fixed integers, the algorithms for both Spearman’s rank correlation and Kendall’s tau have O(1) time complexity and O(1) memory cost. This makes the implementation of these algorithms quite attractive on edge devices, where only limited memory and processing power are available. In practice cutpoints for X and Y

need to be chosen. One good choice for cutpoints are the equally spaced quantiles of the random variable. For example, to choose 9 cutpoints for

X, we can use the sample quantiles of X

that correspond to the probabilities

Step 8 in Algorithm 1 is described in detail for SR and KT respectively in Algorithms 2 and 3, where the nonparametric correlations are quickly computed based on matrix M, nrow, ncol, and n. It is easy to verify that the time complexity of both algorithms is O(m1m2) in linear proportion to the number of cells in matrix M.

The parameters (m1,m2) control a tradeoff between the accuracy and efficiency of the online algorithms. The more cutpoints that are chosen for x and y (larger m1, m2), the more accurate the approximation of the bivariate distribution of (x,y) with M and a more accurate result is generally achieved. However, increasing m1 and m2 also decreases the speed of the online algorithm. Based on the extensive numerical studies of the next section, a rule-of-thumb choice of (m1,m2) is m1=m2=30 for SR and m1=m2=100 for KT.

In practice, the proposed online algorithms for nonparametric correlations usually work well for the following reasons: First, when (m1,m2) increase to infinity, the result of online algorithms converges to the true value. Second, for a reasonably large (m1,m2), each cell of matrix M represents only a very local area of the (X,Y) distribution. Positive errors and negative errors can cancel each other out when summed together.

Algorithms  2 and 3 compute SR and KT over all past data. Frequently, you are interested in computing the statistics only over the recent past. Specifically, you might like to compute SR and KT with a sliding window of a fixed size. Algorithm 1 can be easily modified to deal with such cases. The only change that is needed is to add some steps after step 6; in the added steps M, is updated by first finding the row index and the column index that correspond to the observation (xt−nwin,yt−nwin) and then decreasing the corresponding cell of M by 1. Here nwin represents the size of the sliding windows. The details are left to the readers.

In the following simulation studies, equal numbers of cutpoints are always chosen for both X and Y, and all cutpoints are chosen as equally spaced quantiles of a standard normal distribution. We implement the batch and online nonparametric correlation algorithms in python. Users can download the package from https://github.com/wxiao0421/onlineNPCORR.git.

3.1 Simulation Study with Nonparametric Correlations Computed over All Past Observations

This simulation evaluates the online algorithms for SR and KT (computed over all past observations) by comparing them with the corresponding batch algorithms. The xi, i=1,…,T are generated from an independently and indentically distributed (iid) normal distribution N(0,1). Let yi=(zi+σxi)/√σ2+1, where zi, i=1,…,T are iid N(0,1) random variables, which are independent of xi, i=1,…,T. It is easy to verify that both {xi}Ti=1 and {yi}Ti=1 are iid N(0,1) with a Pearson correlation coefficient of σ/√σ2+1.

3.2 Simulation Study with Nonparametric Correlations Computed Based on Sliding Windows

The results are shown in Figure 5. The SR online algorithm generates a very accurate estimate of Spearman’s rank correlation even when the number of cutpoints is small (m1=m2=30). The KT online algorithm seems to generate a very accurate estimate of the Kendall’s tau correlation when the absolute value of the correlation is small, but it seems to generate a more biased estimate when the absolute value of the correlation is large. This is because when x, y are highly correlated, the (xi,yi) pairs are likely to be concentrated on the diagonal of matrix M. This concentration leads to a poor approximation of the bivariate distribution of (x,y) with matrix M, which leads to biased estimates of Kendall’s tau correlation. For the KT online algorithm we suggest keeping the number of cutpoints above 100 in order to achieve a more accurate result.

This section uses the proposed online algorithms to compute nonparametric correlations based on sensor data that were generated in industrial plant from 2015 Prognostics and Health Management Society Competition [15]. The data contains sensor readings of 50 plants. For each plant, it provides sensor readings of four standard sensors S1-S4, and four control sensors R1-R4. We use the sensor readings of the first component in the first plant to do our experiment, where we compute nonparametric correlations based on sliding windows with window size 35,040 (corresponds to a one-year window).

First, we compute the nonparametric correlation between R1 and S1. R1 contains 10 unique values and we choose 9 cutpoints so that each unique value has its own cell in matrix M. S1 has 121 unique values, and we experiment on two methods to choose cutpoints for S1. In the first method, we choose 120 cutpoints for S1 so that each unique value of S1 has its own cell in matrix M. In the second method, the cutpoints are chosen by first computing sample quantiles of S1 at probabilities 0.05,0.10,…,0.95, and keeping only the unique values. This leads to choosing 19 cutpoints for S1. The result is shown in Figure 6. We refer the result of the online algorithm with 19 cutpoints for S1 as online SR (approximate) and online KT (approximate), respectively. Because the returned nonparametric correlations will only approximately equal the true values. We see a 20-50 fold speed up for SR and 5-20 fold speed up for KT.

Then, we compute the nonparametric correlation between R3 and S3. We choose 7 cutpoints for R3 and 11 cutpoints for S3 so that each unique value of R3 and S3 has its own cell in matrix M. The result is shown in Figure 7. The online algorithm returns the same result as that of batch algorithm with a 20-40 fold speed up.

This paper proposes a novel online algorithm for the computation of Spearman’s rank correlation and Kendall’s tau correlation. The algorithm has time complexity O(1) and memory cost O(1), and it is quite suitable for edge devices, where only limited memory and processing power are available. By changing the number of cutpoints specified in the algorithm, users can seek a balance between speed and accuracy. The new online algorithm is very fast and can easily compute the correlations 10 to 1,000 times faster than the corresponding batch algorithm (the number varies over the settings of the problem). The online algorithm can compute nonparametric correlations based either on all past observations or on fixed-size sliding windows.