A set U⊆^2 is n-universal if all n-vertex planar graphs have a planar straight-line embedding into U. We prove that if Q ⊆^2 consists of points chosen randomly and uniformly from the unit square then Q must have cardinality Ω(n^2) in order to be n-universal with high probability. This shows that the probabilistic method, at least in its basic form, cannot be used to establish an o(n^2) upper bound on universal sets. 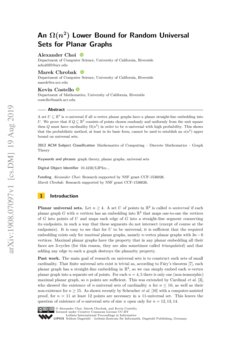 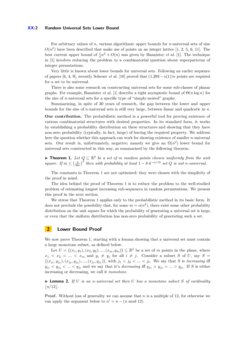 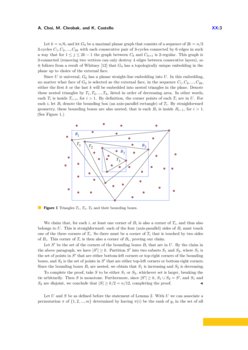 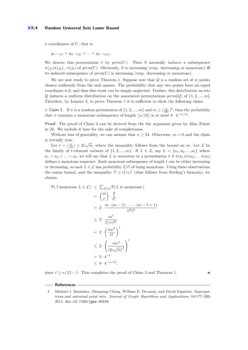 Planar universal sets. Let n≥4. A set U of points in R2 is called n-universal if each planar graph G with n vertices has an embedding into R2 that maps one-to-one the vertices of G into points of U and maps each edge of G into a straight-line segment connecting its endpoints, in such a way that these segments do not intersect (except of course at the endpoints). It is easy to see that for U to be universal, it is sufficient that the required embedding exists only for maximal planar graphs, namely n-vertex planar graphs with 3n−6 vertices. Maximal planar graphs have the property that in any planar embedding all their faces are 3-cycles (for this reason, they are also sometimes called triangulated) and that adding any edge to such a graph destroys the planarity property.

Past work. The main goal of research on universal sets is to construct such sets of small cardinality. That finite universal sets exist is trivial as, according to Fáry’s theorem [7], each planar graph has a straight-line embedding in R2, so we can simply embed each n-vertex planar graph into a separate set of points. For each n=4,5 there is only one (non-isomorphic) maximal planar graph, so n points are sufficient. This was extended by Cardinal et al. [3], who showed the existence of n-universal sets of cardinality n for n≤10, as well as their non-existence for n≥15. As shown recently by Scheucher et al. [10] with a computer-assisted proof, for n=11 at least 12 points are necessary in a 11-universal set. This leaves the question of existence of n-universal sets of size n open only for n=12,13,14.

For arbitrary values of n, various algorithmic upper bounds for n-universal sets of size O(n2) have been described that make use of points on an integer lattice [1, 2, 5, 6, 11]. The best current upper bound of 14n2+O(n) was given by Bannister et al. [1]. The technique in [1] involves reducing the problem to a combinatorial question about superpatterns of integer permutations.

Very little is known about lower bounds for universal sets. Following an earlier sequence of papers [6, 4, 9], recently Scheuer et al. [10] proved that (1.293−o(1))n points are required for a set to be universal.

There is also some research on constructing universal sets for some sub-classes of planar graphs. For example, Bannister et al. [1] describe a tight asymptotic bound of Θ(nlogn) for the size of n-universal sets for a specific type of “simply-nested” graphs.

Summarizing, in spite of 30 years of research, the gap between the lower and upper bounds for the size of n-universal sets is still very large, between linear and quadratic in n.

The probabilistic method is a powerful tool for proving existence of various combinatorial structures with desired properties. In its standard form, it works by establishing a probability distribution on these structures and showing that they have non-zero probability (typically, in fact, large) of having the required property. We address here the question whether this approach can work for showing existence of smaller

n-universal sets. Our result is, unfortunately, negative; namely we give an Ω(n2) lower bound for universal sets constructed in this way, as summarized by the following theorem.

Let Q⊆R2 be a set of m random points chosen uniformly from the unit square. If m≤(n48e)2 then with probability at least 1−8⋅4−n/12 set Q is not n-universal.

The constants in Theorem 1 are not optimized; they were chosen with the simplicity of the proof in mind.

The idea behind the proof of Theorem 1

is to reduce the problem to the well-studied problem of estimating longest increasing sub-sequences in random permutations. We present this proof in the next section.

We stress that Theorem 1 applies only to the probabilistic method in its basic form. It does not preclude the possibility that, for some m=o(n2)

We now prove Theorem 1, starting with a lemma showing that a universal set must contain a large monotone subset, as defined below.

If U is an n-universal set then U has a monotone subset S of cardinality ⌊n/12⌋.

Without loss of generality we can assume that n is a multiple of 12, for otherwise we can apply the argument below to n′=n−(nmod12).

Let k=n/6, and let G0 be a maximal planar graph that consists of a sequence of 2k=n/3 3-cycles C1,C2,...,C2k with each consecutive pair of 3-cycles connected by 6 edges in such a way that for 1≤j≤2k−1 the graph between Ck and Ck+1 is 2-regular. This graph is 3-connected (removing two vertices can only destroy 4 edges between consecutive layers), so it follows from a result of Whitney [12] that G0 has a topologically unique embedding in the plane up to choice of the external face.

Since U is universal, G0 has a planar straight-line embedding into U. In this embedding, no matter what face of G0 is selected as the external face, in the sequence C1,C2,...,C2k, either the first k or the last k will be embedded into nested triangles in the plane. Denote these nested triangles by T1,T2,...,Tk, listed in order of decreasing area. In other words, each Ti is inside Ti−1, for i>1. By definition, the corner points of each Ti are in U. For each i, let Bi denote the bounding box (an axis-parallel rectangle) of Ti. By straighforward geometry, these bounding boxes are also nested, that is each Bi is inside Bi−1, for i>1. (See Figure 1.)

To complete the proof, take S to be either S1 or S2, whichever set is larger, breaking the tie arbitrarily. Then S is monotone. Furthermore, since |S′|≥k, S1∪S2=S′, and S1 and S2 are disjoint, we conclude that |S|≥k/2=n/12, completing the proof. ∎

Let U and S be as defined before the statement of Lemma 2. With U we can associate a permutation π of {1,2,...,m} determined by having π(i) be the rank of yi in the set of all y-coordinates of U, that is

We are now ready to prove Theorem 1. Suppose now that Q is a random set of m points chosen uniformly from the unit square. The probability that any two points have an equal coordinate is 0, and thus this event can be simply neglected. Further, this distribution on sets Q induces a uniform distribution on the associated permutations perm(Q) of {1,2,...,m}. Therefore, by Lemma 2, to prove Theorem 1 it is sufficient to show the following claim:

The proof of Claim 2 can be derived from the the argument given by Alan Frieze in [8]. We include it here for the sake of completeness.

Without loss of generality, we can assume that n≥24. Otherwise, m=0 and the claim is trivially true.

Let ℓ=⌊n12⌋≥2e√m, where the inequality follows from the bound on m. Let L be the family of ℓ-element subsets of {1,2,...,m}. If L∈L, say L={a1,a2,...,aℓ} where a1<a2<...<aℓ, we will say that L is monotone in a permutation π if π(a1)π(a2)…π(aℓ) defines a monotone sequence. Each monotone subsequence of length ℓ can be either increasing or decreasing, so each L∈L has probability 2/ℓ! of being monotone. Using these observations, the union bound, and the inequality ℓ!≥(ℓ/e)ℓ (that follows from Stirling’s formula), we obtain: