In this article, the authors present a new L^p- primal-dual weak Galerkin method (L^p-PDWG) for convection-diffusion equations with p>1. The existence and uniqueness of the numerical solution is discussed, and an optimal-order error estimate is derived in the L^q-norm for the primal variable, where 1/p+1/q=1. Furthermore, error estimates are established for the numerical approximation of the dual variable in the standard W^m,p norm, 0≤ m≤ 2. Numerical results are presented to demonstrate the efficiency and accuracy of the proposed L^p-PDWG method. 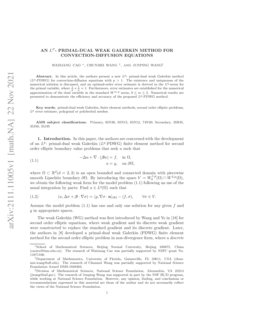 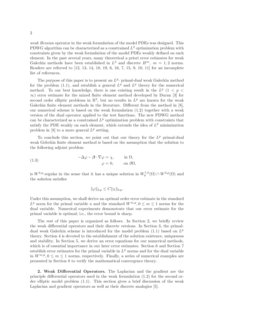 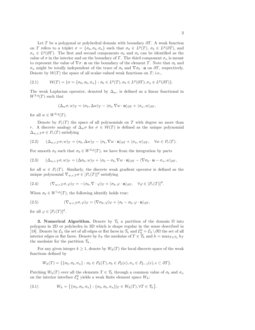 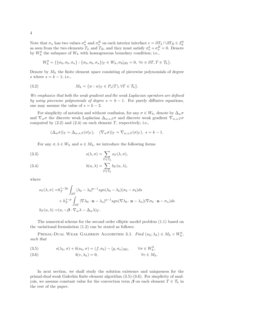 In this article we consider the numerical approximation of the convectio...
Paul Houston, et al. ∙

In this paper, the authors are concerned with the development of an Lp- primal-dual weak Galerkin (Lp-PDWG) finite element method for second order elliptic boundary value problems that seek u such that

where Ω⊂Rd(d=2,3) is an open bounded and connected domain with piecewise smooth Lipschitz boundary ∂Ω. By introducing the space V=W1,p0(Ω)∩W2,p(Ω), we obtain the following weak form for the model problem (1.1) following an use of the usual integration by parts: Find u∈Lq(Ω) such that

Assume the model problem (1.1) has one and only one solution for any given f and g in appropriate spaces.

The weak Galerkin (WG) method was first introduced by Wang and Ye in [18] for second order elliptic equations, where weak gradient and its discrete weak gradient were constructed to replace the standard gradient and its discrete gradient. Later, the authors in [8] developed a primal-dual weak Galerkin (PDWG) finite element method for the second order elliptic problem in non-divergence form, where a discrete weak Hessian operator in the weak formulation of the model PDEs was designed. This PDWG algorithm can be characterized as a constrained L2 optimization problem with constraints given by the weak formulation of the model PDEs weakly defined on each element. In the past several years, many theoretical a priori error estimates for weak Galerkin methods have been established in L2 and discrete Hm, m=1,2 norms. Readers are referred to [12, 13, 14, 18, 19, 6, 16, 7, 15, 9, 10, 11] for an incomplete list of references.

The purpose of this paper is to present an Lp- primal-dual weak Galerkin method for the problem (1.1), and establish a general Lq and Lp theory for the numerical method. To our best knowledge, there is one existing result in the Lp (1<p<∞) error estimate for the mixed finite element method developed by Duran [3] for second order elliptic problems in R2, but no results in Lp are known for the weak Galerkin finite element methods in the literature. Different from the method in [8], our numerical scheme is based on the weak formulation (1.2) together with a weak version of the dual operator applied to the test functions. The new PDWG method can be characterized as a constrained Lp optimization problem with constraints that satisfy the PDE weakly on each element, which extends the idea of L2 minimization problem in [8] to a more general Lp setting.

To conclude this section, we point out that our theory for the Lp primal-dual weak Gelerkin finite element method is based on the assumption that the solution to the following adjoint problem

is W2,p-regular in the sense that it has a unique solution in W1,p0(Ω)∩W2,p(Ω) and the solution satisfies

The rest of this paper is organized as follows. In Section 2, we briefly review the weak differential operators and their discrete versions. In Section 3, the primal-dual weak Galerkin scheme is introduced for the model problem (1.1) based on Lp theory. Section 4 is devoted to the establishment of the solution existence, uniqueness and stability. In Section 5, we derive an error equations for our numerical methods, which is of essential importance in our later error estimates. Section 6 and Section 7 establish error estimates for the primal variable in Lq norms and for the dual variable in Wm,p,0≤m≤1 norms, respectively. Finally, a series of numerical examples are presented in Section 8 to verify the mathematical convergence theory.

The Laplacian and the gradient are the principle differential operators used in the weak formulation (1.2) for the second order elliptic model problem (1.1). This section gives a brief discussion of the weak Laplacian and gradient operators as well as their discrete analogies [5].

Let T be a polygonal or polyhedral domain with boundary ∂T. A weak function on T refers to a triplet σ={σ0,σb,σn} such that σ0∈Lp(T), σb∈Lp(∂T), and σn∈Lp(∂T). The first and second components σ0 and σb can be identified as the value of σ in the interior and on the boundary of T. The third component σn is meant to represent the value of ∇σ⋅n on the boundary of the element T. Note that σb and σn might be totally independent of the trace of σ0 and ∇σ0⋅n on ∂T, respectively. Denote by W(T) the space of all scalar-valued weak functions on T; i.e.,

The weak Laplacian operator, denoted by Δw, is defined as a linear functional in W2,q(T) such that

Denote by Pr(T) the space of all polynomials on T with degree no more than r. A discrete analogy of Δwσ for σ∈W(T) is defined as the unique polynomial Δw,r,Tσ∈Pr(T) satisfying

For smooth σ0 such that σ0∈W2,p(T), we have from the integration by parts

for all w∈Pr(T). Similarly, the discrete weak gradient operator is defined as the unique polynomial ∇w,r,Tσ∈[Pr(T)]d satisfying

For any given integer k≥1, denote by Wk(T) the local discrete space of the weak functions defined by

Patching Wk(T) over all the elements T∈Th through a common value of σb and σn on the interior interface E0h yields a weak finite element space Wh:

Note that σn has two values σLn and σRn on each interior interface e=∂TL∩∂TR∈E0h as seen from the two elements TL and TR, and they must satisfy σLn+σRn=0. Denote by W0h the subspace of Wh with homogeneous boundary condition; i.e.,

We emphasize that both the weak gradient and the weak Laplacian operators are defined by using piecewise polynomials of degree s=k−1. For purely diffusive equations, one may assume the value of s=k−2.

For simplicity of notation and without confusion, for any σ∈Wh, denote by Δwσ and ∇wσ the discrete weak Laplacian Δw,s,Tσ and discrete weak gradient ∇w,s,Tσ computed by (2.2) and (2.4) on each element T, respectively; i.e.,

For any σ,λ∈Wh and u∈Mh, we introduce the following forms

The numerical scheme for the second order elliptic model problem (1.1) based on the variational formulation (1.2) can be stated as follows:

In next section, we shall study the solution existence and uniqueness for the primal-dual weak Galerkin finite element algorithm (3.5)-(3.6). For simplicity of analysis, we assume constant value for the convection term β on each element T∈Th in the rest of the paper.

Denote by Qh the L2 projection onto the finite element space Mh.

To show the existence of solutions, we consider the functional

On the other hand, the equation (3.5) indicates that ∂σJ(λh,uh)(σ)=0 for all σ∈W0h, where ∂σJ(λh,uh)(σ) is the Gateaux partial derivative at λh in the direction of σ. It follows that λh is a global minimizer of the functional σ→J(σ,uh); i.e.,

The above inequality implies that the solution (uh;λh) is a saddle point of the functional J(⋅,⋅). Thus, (3.5)-(3.6) can be formulated as the following min-max problem: Find uh∈Mh and λh∈W0h such that

As a convex minimization problem, the above problem has a solution so that there must be a solution (uh;λh) satisfying (3.5)-(3.6).

The rest of this section is devoted to a discussion of the uniqueness of the numerical solution (uh;λh).

which yields, together with Young’s inequality |AB|≤|A|pp+|B|qq, that

On the other hand, for any two real numbers A,B, there holds

and the equality holds true if and only if A=B. It follows that

The above equality holds true if and only if

which, together with the definition of the weak Laplacian Δw and the weak gradient ∇w, yields

Consequently, from the solution uniqueness for (1.1) we have

Let u and (uh;λh)∈Mh×W0h be the exact solution of (1.1) and its numerical solution arising from PDWG scheme (3.5)-(3.6). The error functions eh and ϵh satisfy the following equations:

Recall that Th is a shape-regular finite element partition of the domain Ω. For any T∈Th and ∇w∈Lq(T) with q>1, the following trace inequality holds true:

Let q>1 and k≥1. Let u and (uh;λh)∈Mh×W0h be the exact solution of the second order elliptic model problem (1.1) and the numerical solution arising from PDWG scheme (3.5)-(3.6). The following error estimate holds true:

For the first term on the right-hand side of (6.3), we use the Cauchy-Schwarz inequality to obtain