An Isoperimetric Result on High-Dimensional Spheres

We consider an extremal problem for subsets of high-dimensional spheres that can be thought of as an extension of the classical isoperimetric problem on the sphere. Let A be a subset of the (m-1)-dimensional sphere S^m-1, and let y∈S^m-1 be a randomly chosen point on the sphere. What is the measure of the intersection of the t-neighborhood of the point y with the subset A? We show that with high probability this intersection is approximately as large as the intersection that would occur with high probability if A were a spherical cap of the same measure. 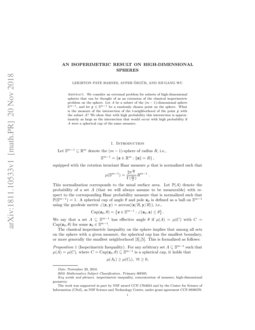 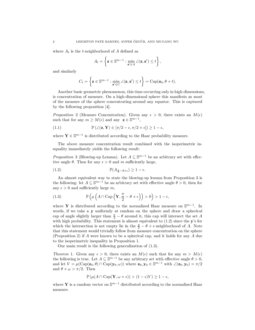 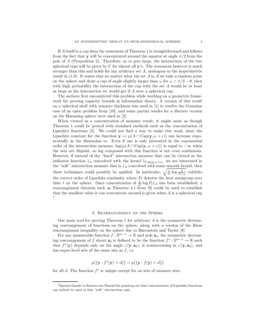 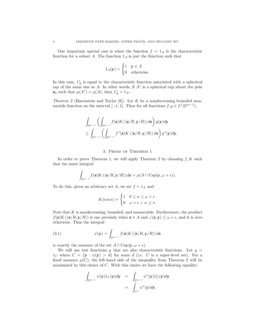 Let G be an intersection graph of n geometric objects in the plane. We s...
Édouard Bonnet, et al. ∙

Any Target Function Exists in a Neighborhood of Any Sufficiently Wide Random Network: A Geometrical Perspective

It is known that any target function is realized in a sufficiently small...
Shun-ichi Amari, et al. ∙

This normalization corresponds to the usual surface area. Let P(A) denote the probability of a set A (that we will always assume to be measurable) with respect to the corresponding Haar probability measure that is normalized such that P(Sm−1)=1. A spherical cap of angle θ and pole z0 is defined as a ball on Sm−1 using the geodesic metric ∠(z,y)=arccos(⟨z/R,y/R⟩), i.e.,

The classical isoperimetric inequality on the sphere implies that among all sets on the sphere with a given measure, the spherical cap has the smallest boundary, or more generally the smallest neighborhood [3],[5]. This is formalized as follows:

where At is the t-neighborhood of A defined as

Another basic geometric phenomenon, this time occurring only in high-dimensions, is concentration of measure. On a high-dimensional sphere this manifests as most of the measure of the sphere concentrating around any equator. This is captured by the following proposition [4].

where Y∈Sm−1 is distributed according to the Haar probability measure.

The above measure concentration result combined with the isoperimetric inequality immediately yields the following result:

Let A⊆Sm−1 be an arbitrary set with effective angle θ. Then for any ϵ>0 and m sufficiently large,

An almost equivalent way to state the blowing-up lemma from Proposition 3 is the following: let A⊆Sm−1 be an arbitrary set with effective angle θ>0, then for any ϵ>0 and sufficiently large m,

where Y is distributed according to the normalized Haar measure on Sm−1. In words, if we take a y uniformly at random on the sphere and draw a spherical cap of angle slightly larger than π2−θ around it, this cap will intersect the set A with high probability. This statement is almost equivalent to (1.2) since the y’s for which the intersection is not empty lie in the π2−θ+ϵ-neighborhood of A. Note that this statement would trivially follow from measure concentration on the sphere (Proposition 2) if A were known to be a spherical cap, and it holds for any A due to the isoperimetric inequality in Proposition 1.

Our main result is the following generalization of (1.3).

is a random vector on

Sm−1 distributed according to the normalized Haar measure.

If A itself is a cap then the statement of Theorem 1 is straightforward and follows from the fact that y will be concentrated around the equator at angle π/2 from the pole of A (Proposition 2). Therefore, as m gets large, the intersection of the two spherical caps will be given by V for almost all y’s. The statement however is much stronger than this and holds for any arbitrary set A, analogous to the isoperimetric result in (1.3). It states that no matter what the set A is, if we take a random point on the sphere and draw a cap of angle slightly larger than ω for ω>π/2−θ, then with high probability the intersection of the cap with the set A would be at least as large as the intersection we would get if A were a spherical cap.

The authors first encountered this problem while working on a geometric framework for proving capacity bounds in information theory. A version of this result on a spherical shell with nonzero thickness was used in [1] to resolve the Gaussian case of an open problem from [10], and some partial results for a discrete version on the Hamming sphere were used in [2].

When viewed as a concentration of measure result, it might seem as though Theorem 1 could be proved with standard methods such as the concentration of Lipschitz functions [5]. We could not find a way to make this work, since the Lipschitz constant for the function y↦μ(A∩Cap(y,ω+ϵ)) can increase exponentially in the dimension m. Even if one is only interested in the exponential order of the intersection measure, log(μ(A∩Cap(y,ω+ϵ))) is equal to −∞ when the sets are disjoint, so log composed with this function is not even continuous. However, if instead of the “hard” intersection measure that can be viewed as the indicator function 1A convolved with the kernel 1Cap(y,ω+ϵ), we are interested in the “soft” intersection measure that is 1A convolved with some smooth kernel, then these techniques could possibly be applied. In particular, √1mlog1Pt1A exhibits the correct order of Lipschitz continuity where Pt denotes the heat semigroup over time t on the sphere. Once concentration of 1mlogPt1A has been established, a rearrangement theorem such as Theorem 4.1 from [9] could be used to establish that the smallest value it can concentrate around is given when A is a spherical cap 111Special thanks to Ramon van Handel for pointing out that concentration of Lipschitz functions can indeed be used in this “soft” intersection case..

2. Rearrangement on the Sphere

For any measurable function f:Sm−1→R and pole z0, the symmetric decreasing rearrangement of f about z0 is defined to be the function f∗:Sm−1→R such that f∗(y) depends only on the angle ∠(y,z0), is nonincreasing in ∠(y,z0), and has super-level sets of the same size as f, i.e.

for all d. The function f∗ is unique except for on sets of measure zero.

One important special case is when the function f=1A

is the characteristic function for a subset

In this case, 1∗A is equal to the characteristic function associated with a spherical cap of the same size as A. In other words, if A∗ is a spherical cap about the pole z0 such that μ(A∗)=μ(A), then 1∗A=1A∗.

Let K be a nondecreasing bounded measurable function on the interval [−1,1]. Then for all functions f,g∈L1(Sm−1),

In order to prove Theorem 1, we will apply Theorem 2 by choosing f,K such that the inner integral

To do this, given an arbitrary set A, we set f=1A and

Note that K is nondecreasing, bounded, and measurable. Furthermore, the product f(z)K(⟨z/R,y/R⟩) is one precisely when z∈A and ∠(z,y)≤ω+ϵ, and it is zero otherwise. Thus the integral

is exactly the measure of the set A∩Cap(y,ω+ϵ).

We will use test functions g that are also characteristic functions. Let g=1C where C={y:ψ(y)>d} for some d (i.e. C is a super-level set). For a fixed measure μ(C), the left-hand side of the inequality from Theorem 2 will be maximized by this choice of C. With this choice we have the following equality:

Using this equality and our choices for f,g,K above we will rewrite the inequality from Theorem 2 as

Note that both ψ∗(y) and ¯ψ(y) are spherically symmetric. More concretely, they both depend only on the angle ∠(y,z0), so in an abuse of notation we will write ¯ψ(α) and ψ∗(α) where α=∠(y,z0).

For convenience we will define a measure ν by

where Am(R) denotes the Haar measure of the m-sphere with radius R. We do this so that an integral like

can be expressed as

We are now ready to prove Theroem 1. Proposition 2 implies that for any 0<ϵ<1, there exists an M(ϵ) such that for m>M(ϵ) we have

The constant M(ϵ) is determined only by the concentration of measure phenomenon cited above, and it does not depend on any parameters in the problem other than ϵ. From now on, let us restrict our attention to dimensions m>M(ϵ). Due to the triangle inequality for the geodesic metric, for y such that ∠(z0,y)∈[π/2−ϵ,π/2+ϵ] we have

To prove the lemma, we need to show that

for any arbitrary set A⊂Sm−1. Recall that by the definition of a decreasing symmetric rearrangement, we have

for any threshold d and this implies

Therefore, the desired statement in (3.7) can be equivalently written as

Turning to proving (3.9), recall that by the definition of a decreasing symmetric rearrangement, ψ∗(α) is nonincreasing over the interval 0≤α≤π. Let β be the smallest value such that ψ∗(β)=(1−ϵ)V, or more explicitly,

By the definition of β and the fact that ψ∗ is nonincreasing,

To bound the first and third terms of (3.10) note that

as a consequence of (3.4). In order to bound the second term, we establish the following chain of (in)equalities which will be justified below.

must be bounded by ϵ which implies the lemma.

The first inequality (3.13) is a consequence of the fact that over the range of the integral, ψ∗ is less than or equal to (1−ϵ)V and ¯ψ is non-negative. The equality in (3.14) follows from