An investigation of the classifiers to detect android malicious apps

Android devices are growing exponentially and are connected through the internet accessing billion of online websites. The popularity of these devices encourages malware developer to penetrate the market with malicious apps to annoy and disrupt the victim. Although, for the detection of malicious apps different approaches are discussed. However, proposed approaches are not suffice to detect the advanced malware to limit/prevent the damages. In this, very few approaches are based on opcode occurrence to classify the malicious apps. Therefore, this paper investigates the five classifiers using opcodes occurrence as the prominent features for the detection of malicious apps. For the analysis, we use WEKA tool and found that FT detection accuracy (79.27 best among the investigated classifiers. However, true positives rate i.e. malware detection rate is highest (99.91 different number of prominent features compared to other studied classifiers. The analysis shows that overall accuracy is majorly affected by the false positives of the classifier. 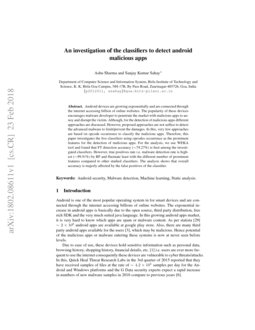 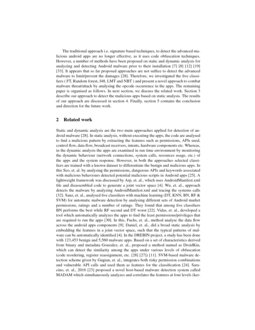 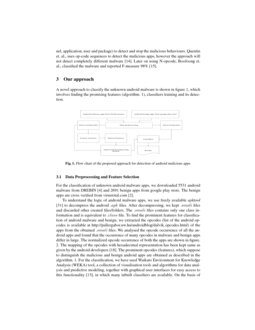 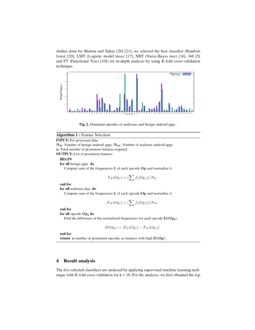 A Survey on the Detection of Android Malicious Apps

The popularity of Android system, not only in the handset devices but al...
ElMouatez Billah Karbab, et al. ∙

In the fast-growing smart devices, Android is the most popular OS, and d...
Ashu Sharma, et al. ∙

Stimulation and Detection of Android Repackaged Malware with Active Learning

Repackaging is a technique that has been increasingly adopted by authors...
Aleieldin Salem, et al. ∙

Malicious websites are responsible for a majority of the cyber-attacks a...
Apoorva Joshi, et al. ∙

Android is one of the most popular operating system in for smart devices and are connected through the internet accessing billions of online websites. The exponential increase in android apps is basically due to the open source, third party distribution, free rich SDK and the very much suited java language. In this growing android apps market, it is very hard to know which apps are spam or malware content. As per statista [29] ∼2×106 android apps are available at google play store. Also, there are many third party android apps available for the users [3], which may be malicious. Hence potential of the malicious apps or malware entering these systems is now at never seen before levels.

Due to ease of use, these devices hold sensitive information such as personal data, browsing history, shopping history, financial details, etc. [1] i.e. users are ever more frequent to use the internet consequently these devices are vulnerable to cyber threats/attacks. In this, Quick Heal Threat Research Labs in the 3rd quarter of 2015 reported that they have received samples of files at the rate of ∼4.2×105 samples per day for the Android and Windows platforms and the G Data security experts expect a rapid increase in numbers of new malware samples in 2016 compare to previous years [6].

The traditional approach i.e. signature based techniques, to detect the advanced malicious android apps are no longer effective, as it uses code obfuscation techniques. However, a number of methods have been proposed on static and dynamic analysis for analyzing and detecting Android malware prior to their installation [7] [8] [12] [19] [33]. It appears that so far proposed approaches are not suffice to detect the advanced malware to limit/prevent the damages [28]

. Therefore, we investigated the five classifiers ( FT, Random forest, J48, LMT and NBT ) and present a novel approach to combat malware threat/attack by analysing the opcode occurrence in the apps. The remaining paper is organised as follows. In next section, we discuss the related work. Section 3 describe our approach to detect the malicious apps based on static analysis. The results of our approach are discussed in section 4. Finally, section 5 contains the conclusion and direction for the future work.

Static and dynamic analysis are the two main approaches applied for detection of android malware [28]. In static analysis, without executing the apps, the code are analysed to find a malicious pattern by extracting the features such as permissions, APIs used, control flow, data flow, broadcast receivers, intents, hardware components etc. Whereas, in the dynamic analysis the apps are examined in run time environment by monitoring the dynamic behaviour (network connections, system calls, resources usage, etc.) of the apps and the system response. However, in both the approaches selected classifiers are trained with a known dataset to differentiate the benign and malicious apps. In this Seo, et. al. by analysing the permissions, dangerous APIs and keywords associated with malicious behaviours detected potential malicious scripts in Android apps [25]

. A lightweight framework was discussed by Arp, et. al., which uses AndroidManifest.xml file and disassembled code to generate a joint vector space

[22]. Vidas, et. al., developed a tool which automatically analyzes the apps to find the least permissions/privileges that are required to run the apps [30]. In this, Fuchs, et. al., method analyse the data flow across the android apps components [9]. Daniel, et. al., did a broad static analysis by embedding the features in a joint vector space, such that the typical patterns of malware can be automatically identified [4]. In the DREBIN project, a study has been done with 123,453 benign and 5,560 malware apps. Based on a set of characteristics derived from binary and metadata Gonzalez, et. al., proposed a method named as DroidKin, which can detect the similarity among the apps under various levels of obfuscation (code reordering, register reassignment, etc. [28] [27]) [11]. SVM-based malware detection scheme given by Gugian, et. al., integrates both risky permission combinations and vulnerable API calls and used them as features for the classification [24]. Saracino, et. al., 2016 [23] proposed a novel host-based malware detection system called MADAM which simultaneously analyzes and correlates the features at four levels (kernel, application, user and package) to detect and stop the malicious behaviours. Quentin et. al., uses op-code sequences to detect the malicious apps, however the approach will not detect completely different malware [14]. Later on using N-opcode, BooJoong et. al., classified the malware and reported F-measure 98% [15].

A novel approach to classify the unknown android malware is shown in figure 1, which involves finding the promising features (algorithm. 1), classifiers training and its detection.

To understand the logic of android malware apps, we use freely available apktool [31] to decompress the android .apk files. After decompressing, we kept .smali files and discarded other created files/folders. The .smali files contains only one class information and is equivalent to .class file. To find the prominent features for classification of android malware and benign, we extracted the opcodes (list of the android opcodes is available at http://pallergabor.uw.hu/androidblog/dalvik_opcodes.html) of the apps from the obtained .smali files. We analysed the opcode occurrence of all the android apps and found that the occurrence of many opcodes in malware and benign apps differ in large. The normalized opcode occurrence of both the apps are shown in figure. 2. The mapping of the opcodes with hexadecimal representation has been kept same as given by the android developers [18]. The prominent opcodes (features), which suppose to distinguish the malicious and benign android apps are obtained as described in the algorithm. 1. For the classification, we have used Waikato Environment for Knowledge Analysis (WEKA) tool, a collection of visualisation tools and algorithms for data analysis and predictive modeling, together with graphical user interfaces for easy access to this functionality [13], in which many inbuilt classifiers are available. On the basis of studies done by Sharma and Sahay [26] [21], we selected the best classifier (Random forest [20], LMT (Logistic model trees) [17]

The performance of the classifier has been studied by taking 20% of available data (not used for training) with 20-200 best features, incrementing 20 features at each step and the result obtained are shown in figure. 4. From the analysis, the best accuracy is obtained by FT, Random forest, J48, LMT and NBT is approximately 79.27, 74.95, 71.73, 70.51 and 68.87 percent (figure 4). Among these classifiers the least fluctuation in the accuracy by varying the features is observed in Random forest. Figure 6 shows the TPR (malware detection rate) of all five classifiers with a different number of features. We found that the RF gives maximum TPR with least fluctuation compared to other classifiers.

The threat/attack from the malicious apps in android devices are now never seen at before levels, as millions of android apps are available officially (google play store) and unofficially. Some of these available apps may be malicious, hence these devices are very much vulnerable to cyber threat/attack. The consequence will be devastating if in time counter-measures are not developed. Therefore, in this paper, we investigated five classifier FT, Random forest, J48, LMT and NBT for the detection of malicious apps. We found that among the studied classifiers, FT is the best classifiers and detect the malware with ∼79.27% accuracy. However, true positives i.e. malware detection rate is highest (∼99.91%) by RF and fluctuate least with the different number of prominent features compared to other studied classifiers, which is better than BooJoong et. al., F-measure (98%) [15]. The analysis shows that overall accuracy is majorly affected by the false positives of the classifier. Hence in future more detail study are required to decrease the false positive and negative ratio for overall good accuracy and in this direction work is in progress, showing impressive results.