We propose an efficient and interpretable scene graph generator. We consider three types of features: visual, spatial and semantic, and we use a late fusion strategy such that each feature's contribution can be explicitly investigated. We study the key factors about these features that have the most impact on the performance, and also visualize the learned visual features for relationships and investigate the efficacy of our model. We won the champion of the OpenImages Visual Relationship Detection Challenge on Kaggle, where we outperform the 2nd place by 5% (20% relatively). We believe an accurate scene graph generator is a fundamental stepping stone for higher-level vision-language tasks such as image captioning and visual QA, since it provides a semantic, structured comprehension of an image that is beyond pixels and objects. 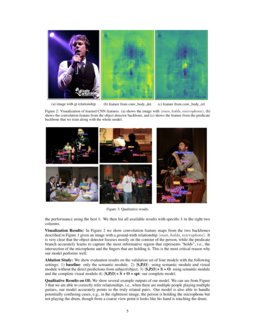 We investigate the incorporation of visual relationships into the task o...
Maximilian Mozes, et al. ∙

This article describes the model we built that achieved 1st place in the...
Ji Zhang, et al. ∙

How do we know that a kitchen is a kitchen by looking? Relatively little...
Michelle R. Greene, et al. ∙

The Visual QA Devil in the Details: The Impact of Early Fusion and Batch Norm on CLEVR

: class labels of the two objects which provide a strong prior of the predicate. Most of them, if not all, combine the three features in an early stage to learn a compositional feature for relationship prediction. The contribution of each feature is thus implicit and probably not optimized. In this paper we propose a structure that instead explicitly builds three branches for the three features, each contributing to the output in an interpretable way, and we fuse their outputs in the final stage to get optimized predictions.

Our contributions are: 1) we propose a new model that efficiently combines three features and show explicitly what each feature contributes to the final prediction and how much the contribution is. 2) we demonstrate the efficacy of our model on three datasets: OpenImages (OI) openimages , Visual Genome (VG) krishnavisualgenome and Visual Relationship Detection (VRD) lu2016visual . We won the 1st place in the OpenImages Challenge, and we outperform state-of-the-art methods on VG and VRD by significant margins.

The task of visual relationship detection can be defined as a mapping f from image I to 3 labels and 2 boxes lS,lP,lO,bS,bO

where l,b stand for labels and boxes, S,P,O stand for subject, predicate, object. We decompose f into object detector fdet

The decomposition means that we can run an object detector on the input image to obtain labels, boxes and visual features for subject and object, then use these as input features to the relationship classifier which only needs to output a label. There are two obvious advantages in this model: 1) learning complexity is dramatically reduced, since we can simply use an off-the-shelf object detector as fdet without the need for re-training, hence the learn-able weights exist only in the small subnet frel; 2) We have much richer features for relationships, i.e., lS,lO,bS,bO,vS,vO for frel, instead of only the image I for f.

We further assume that the semantic feature lS,lO, spatial feature bS,bO and visual feature vS,vO are independent from each other. So we can build 3 separate branches of sub-networks for them. This is the basic work flow of our model.

Figure 1 shows our model in details. The network takes an input image and outputs the 6 aforementioned features, then each branch uses its corresponding feature to produce a confidence score for predicates, then all scores are added up and normalized by softmax. We now introduce each module’s design and their motivation.

Zeller, et al.zellers2018neural introduced a frequency baseline that performs reasonably well on Visual Genome datasetxu2017scene by counting frequencies of predicates given subject and object. Its motivation is that in general cases, the types of relationships between two objects are usually limited, e.g., given the subject being person and object being horse, their relationship is highly likely to be “ride”, “walk”, “feed”, but less likely to be “stand on”, “carry”, “wear”, etc. In short, the ⟨subject,predicate,object⟩ composition is usually biased. Furthermore, any specific relationship detection dataset can only contain a limited number of them, making the bias even stronger. This is a factor that we find every useful to leverage.

We improved this baseline by removing the background class of subject and object. Specifically, for each training image we count the occurrence of lP given lS,lO in the ground truth annotations, and we end up with an empirical distribution p(P|S,O) for the whole training set. We do this under the assumption that the test set is also drawn from the same distribution. We then build the remaining modules to learn a complementary residual on top of the output of this baseline.

In the challenge dataset, the three predicates “on”, “under”, “inside_of” indicate purely spatial relationships i.e., the relative locations of subject and object are sufficient to tell the relationship. A common solution, as applied in Faster-RCNNren2015faster , is to learn a mapping from visual features to location offsets. However, the learning becomes significantly hard when the distance of two objects are very fargkioxari2017interactnet , which is often the case for relationships. We capture spatial information by encoding the box coordinates of subjects and objects using box deltaren2015faster and normalized coordinates:

where Δ(b1,b2) are box delta of two boxes b1,b2, and c(b) are normalized coordinates of box b, which are defined as:

Visual Module is useful mainly for three reasons: 1) it accounts for all other types of relationships that spatial features can hardly predict, e.g., interactions such as “man play guitar” and “woman wear handbag”; 2) it solves relationship reference problemskrishna2018referring

, i.e., when there are multiple subjects or objects that belong to a same category, we need to know which subject is related to which object; 3) for some specific interactions, e.g., “throw”, “eat” “ride”, the visual appearance of the subject or object alone is very informative about the predicate. With these motivations, we feed subject, predicate, object ROIs into the backbone and get the feature vectors from its last fc layer as our visual features, then we concatenate these three features and feed them into 2 additional randomly initialized fc layers followed by an extra fc layer to get a logit, i.e., unnormalized score. We also add one fc layer on top of the subject feature and another fc layer on top of the object feature to get two scores. These two scores are the predictions made solely by the subject/object feature according to the third reason mentioned above.

” is also considered as relationships, where there is only one object involved. We achieve this sub-task by using a completely separate, single-branch, Fast-RCNN based model. We use the same object detector to get proposals for this model, then for each proposal the model produces a probability distribution over all attributes with the Fast-RCNN pipeline.

We present quantitative and qualitative results on OpenImages (OI). We show ablation study on each component of our model. We also show results on Visual Genome (VG) and Visual Relationship Detection (VRD) datasets compared with strong previous methods.

OI: In Table 1 we show the competition results on both the public and private leader board. The score is computed by weight average of three metrics: recall of top 50 predictions (R@50), mean average precision of relationships (mAP_rel), mean average precision of phrases (mAP_phr). The weights for them are 0.2, 0.4, 0.4, respectively. Our model surpasses the 2nd place by 15% relatively on the public dataset and 20% relatively on the private dataset.

VG: We present experimental comparison with state-of-the-art methods on Visual Genome dataset in Table 3. We use the same train/test splits as in xu2017scenegraph

. We use the same evaluation metrics used in

VRD: We compare with state-of-the-art methods on VRD dataset in Table 4. We use the metrics presented in yu17iccv . Note that there is a variable k in this metric which is the number of relation candidates when selecting top50/100. Since not all previous methods specified k in their evaluation, we first report performance in the “free k” column when considering k as a hyper-parameter that can be cross-validated. For methods where the k is reported for 1 or more values, the column reports the performance using the best k. We then list all available results with specific k in the right two columns.

Visualization Results: In Figure 2 we show convolution feature maps from the two backbones described in Figure 1 given an image with a ground-truth relationship ⟨man,holds,microphone⟩. It is very clear that the object detector focuses mostly on the contour of the person, while the predicate branch accurately learns to capture the most informative region that represents “holds”, i.e., the intersection of the microphone and the fingers that are holding it. This is the most critical reason why our model performs well.

Qualitative Results on OI: We show several example outputs of our model. We can see from Figure 3 that we are able to correctly refer relationships, i.e., when there are multiple people playing multiple guitars, our model accurately points to the truly related pairs. Our model is also able to handle potentially confusing cases, e.g., in the rightmost image, the person is holding the microphone but not playing the drum, though from a coarse view point it looks like his hand is touching the drum.