Canonical correlation analysis (CCA for short) describes the relationship between two sets of variables by finding some linear combinations of these variables that maximizing the correlation coefficient. However, in high-dimensional settings where the number of variables exceeds sample size, or in the case of that the variables are highly correlated, the traditional CCA is no longer appropriate. In this paper, an adaptive sparse version of CCA (ASCCA for short) is proposed by using the trace Lasso regularization. The proposed ASCCA reduces the instability of the estimator when the covariates are highly correlated, and thus improves its interpretation. The ASCCA is further reformulated to an optimization problem on Riemannian manifolds, and an manifold inexact augmented Lagrangian method is then proposed for the resulting optimization problem. The performance of the ASCCA is compared with the other sparse CCA techniques in different simulation settings, which illustrates that the ASCCA is feasible and efficient. 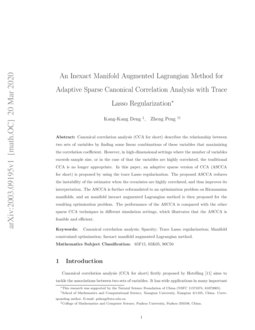 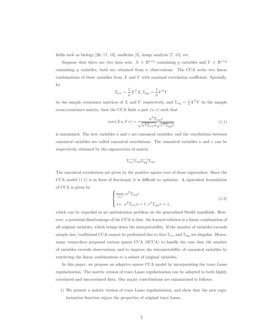 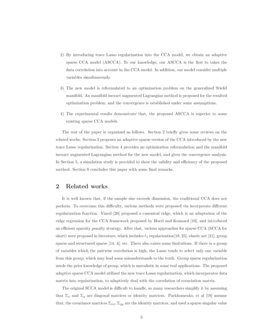 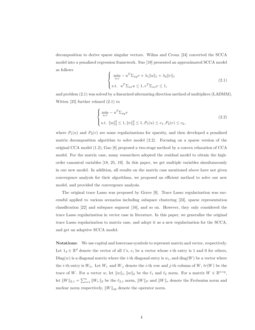 Canonical correlation analysis (CCA for short) firstly proposed by Hotelling [11] aims to tackle the associations between two sets of variables. It has wide applications in many important fields such as biology [26, 18, 13], medicine [5], image analysis [7, 15], etc.

Suppose that there are two data sets: X∈Rn×p containing p variables and Y∈Rn×q containing q variables, both are obtained from n observations. The CCA seeks two linear combinations of these variables from X and Y with maximal correlation coefficient. Specially, let

can be respectively obtained by the eigenvectors of matrix

The canonical correlations are given by the positive square root of those eigenvalues. Since the CCA model (

1.1) is in form of fractional, it is difficult to optimize. A equivalent formulation of CCA is given by

which can be regarded as an optimization problem on the generalized Stiefel manifolds. However, a potential disadvantage of the CCA is that, the learned solution is a linear combination of all original variables, which brings down the interpretability. If the number of variables exceeds sample size, traditional CCA cannot be performed due to that Σxx and Σyy are singular. Hence, many researchers proposed various sparse CCA (SCCA) to handle the case that the number of variables exceeds observations, and to improve the interpretability of canonical variables by restricting the linear combinations to a subset of original variables.

The rest of the paper is organized as follows. Section 2 briefly gives some reviews on the related works. Section 3 proposes an adaptive sparse version of the CCA introduced by the new trace Lasso regularization. Section 4 provides an optimization reformulation and the manifold inexact augmented Lagrangian method for the new model, and gives the convergence analysis. In Section 5, a simulation study is provided to show the validity and efficiency of the proposed method. Section 6 concludes this paper with some final remarks.

It is well known that, if the sample size exceeds dimension, the traditional CCA does not perform. To overcome this difficulty, various methods were proposed via incorporate different regularization function. Vinod [20]

proposed a canonical ridge, which is an adaptation of the ridge regression for the CCA framework proposed by Hoerl and Kennard

[10], and introduced an efficient sparsity penalty strategy. After that, various approaches for sparse CCA (SCCA for short) were proposed in literature, which includes ℓ1 regularization[17, 25], elastic net [21], group sparse and structured sparse [14, 4], etc. There also exists some limitations. If there is a group of variables which the pairwise correlation is high, the Lasso tends to select only one variable from this group, which may lead some misunderstands to the truth. Group sparse regularization needs the prior knowledge of group, which is unrealistic in some real applications. The proposed adaptive sparse CCA model utilized the new trace Lasso regularization, which incorporates data matrix into regularization, to adaptively deal with the correlation of covariation matrix.

The original SCCA model is difficult to handle, so many researchers simplify it by assuming that Σx and Σy are diagonal matrices or identity matrices. Parkhomenko, et al [17] assume that, the covariance matrices Σxx,Σyy

and problem (2) was solved by a linearized alternating direction method of multipliers (LADMM). Witten [25] further relaxed (2) to

where P1(u) and P2(v) are some regularizations for sparsity, and then developed a penalized matrix decomposition algorithm to solve model (2). Focusing on a sparse version of the original CCA model (1), Gao [8] proposed a two-stage method by a convex relaxation of CCA model. For the matrix case, many researchers adopted the residual model to obtain the high-order canonical variables [17, 25, 19]. In this paper, we get multiple variables simultaneously in our new model. In addition, all results on the matrix case mentioned above have not given convergence analysis for their algorithms, we proposed an efficient method to solve our new model, and provided the convergence analysis.

We use capital and lowercase symbols to represent matrix and vector, respectively. Let 1d∈Rd denote the vector of all 1’s, ei be a vector whose i-th entry is 1 and 0 for others, Diag(w) is a diagonal matrix where the i-th diagonal entry is wi, and diag(W) be a vector where the i-th entry is Wii. Let Wi⋅ and W⋅j denote the i-th row and j-th column of W, tr(W) be the trace of W. For a vector w, let ∥w∥1,∥w∥2 be the ℓ1 and ℓ2 norm. For a matrix W∈Rn×p, let ∥W∥2,1=∑ni=1∥Wi⋅∥2 be the ℓ2,1 norm, ∥W∥F and ∥W∥∗ denote the Frobenius norm and nuclear norm respectively, ∥W∥op denote the operator norm.

where X∈Rn×p is a data matrix. The trace Lasso is a correlation based penalized norm proposed by Grave et al [9] for balancing the ℓ1 and ℓ2 norm. It is defined as follows

where ∥⋅∥∗ is nuclear norm. A main advantage of trace Lasso being superior to other norm is that, the trace Lasso involves the data matrix X, makes it adaptive to the correlation of data. As shown in [9], if each column of X is normalized to 1

, the trace Lasso interpolates between the

ℓ1 norm and ℓ2 norm in the sense of

and its adjoint operator A∗X:Rn×pr→Rp×r as

where Mi=M(:,(i−1)p+1:ip) denotes i-th block matrix of M. Then, the trace Lasso in matrix case is defined as follows

It is easy to show that, the trace Lasso regularizer in matrix case (3.2) has similar properties to that in vector case. If each column of X is normalized, then the linear operator AX can be rewritten to

The following proposition show that the trace Lasso (3.2) in matrix case is adaptive to the correlation of data, which is similar to the original trace Lasso.

Let X∈Rn×p, and each column of X is normalized, W∈Rp×r. Then

We first show that ∥AX(W)∥F=∥W∥F. Specifically, we have

Then, for the first inequality of (3.1) we have

The first equality used the fact that the dual norm of the trace norm is the operator norm. The last inequality used that ∥X.j∥=1(∀j), and ∥Mi:,j∥2≤1 which deduces ∥^Mj∥F≤√r. ∎

3.3 Regression framework of the adaptive SCCA

Given two data matrices X∈Rn×p and Y∈Rn×q on the same set of observations, where n is the sample size, p and q are the feature numbers. Without loss of generality, we assume that data matrices X and Y are mean centered. By Σxx=1nXTX,ΣYY=1nYTY and Σxy=1nXTY, the CCA problem can be rewritten as

The CCA problem (3.2) can be reformulated to a constrained bilinear regression problem of the form

To adapt to the dependence of data, we consider an adaptive sparse CCA (SCCA) model with trace Lasso regularization. Specifically, we have

The Lagrangian function associated with (4.1) is given by

where Λ1 and Λ2 denote the Lagrangian multipliers. Let ρ be a penalty parameter. Then, the corresponding augmented Lagrangian function is given by

Then, the proposed manifold inexact augmented Lagrangian method for (4.1) is summarized in Algorithm 1.

The corresponding augmented Lagrangian can be rewritten as

The corresponding KKT condition is given by

where ∂F(W∗) is the Riemannian subdifferential of F at W∗. To obtain an efficient implementation of Algorithm 1, we inexactly solve the iteration subproblem (4.1) in which the following stoping criteria is used:

Following Yang, Zhang and Song [27], we give the constraint qualifications of problem (4.2):

Linear independence constraint qualifications (LICQ) are said to hold at W∈N for problem (4.2) if

Suppose {Wk}k∈N is a sequence generated by Algorithm 1, and the stoping criteria (4.2) is hit at the k-th iteration. Then the limit point set of {Wk}k∈N is nonempty. Let W∗ be a limit point of {Wk}, and the LICQ holds at W∗. Then W∗ is a KKT point of the problem (4.2).

then Z1=Z2=0. Since N is a submanifold of Euclidean space, it derives immediately from (4.2) that

Which implies that LICQ holds at W and completes the proof. ∎

In section 4.1, we present an manifold inexact augmented Lagrangian method to solve problem (4.1). The main challenge in the proposed method (Algorithm 1) is to solve subproblem (4.1) efficiently. Problem (4.1) is a nonsmooth problem under manifold constrained. In this subsection, we first get an equivalence smooth optimization problem by using the Moreau envelop technique, then we present Riemannian gradient method to solve the equivalent problem.

The proximal mapping Proxp(⋅) associated with p is defined by

For fixed Λ1,Λ2 and ρ, we consider

Now we focus on the subproblem regarding jointed variable (U,V) in (4.3). Recall that

By Lemma B.1, ψ(W) is continuously differentiable in Euclidean space, and its Euclidean gradient is

Since M is a Riemannian submanifold in Euclidean space, by lemma (B.2) ψ(W) is retraction smooth, and its Riemannian gradient is

It is shown that problem (4.3) is a smooth optimization problem on Riemannian manifold. In this paper, we adopt a Riemannian Barzilai-Borwein (RBB) gradient method [12] to solve problem (4.3), see Algorithm 2 for details.

In the section, the performance of the SCCA model and the proposed method is verified by random simulation. The proposed adaptive trace Lasso regularization CCA in this paper is compared with the sparse CCA-ℓ1 model (named as CoLaR) proposed by Gao [8]. The CoLaR is a computationally feasible two-stage method, which consists of a convex-programming-based initialization stage and a group-Lasso-based refinement stage. In the first stage, CoLaR solves the following convex minimization problem:

where ^Σxy,^Σx and ^Σy are sample covariance matrices. Let U0 and V0 be the matrices whose column vectors are respectively the top r− left and right singular vectors of ^F. Then, in the second stage, CoLaR solve the following group-Lasso problem: