Given an undirected graph G(V, E, τ) modeling a 'social network', where each node v is associated with a threshold value τ(v), a set of vertices S⊆ V(G) (called 'seed nodes') is chosen initially. Now a 'social contagion process' is defined on G as follows. At time t=0 the nodes in S have some information, and it is diffused in discrete time steps. An 'un-influenced' node v will change its state to 'influenced' at time step t if it has at least τ(v) number of neighbors, which are influenced at time step t-1. The process continues until no more node activation is possible. Based on this diffusion process, a well-studied problem in the literature is the 'Target Set Selection Problem (TSS Problem)', where the goal is to influence all the nodes of the network by initially choosing the minimum number of seed nodes. Chen et al. [On the Approximability of Influence in Social Networks. SIAM Journal on Discrete Mathematics, 23(3):1400-1415, 2009] showed that the decision version of this optimization problem is NP-Hard on bounded degree bipartite graphs. In this paper, we show that this problem on bipartite graph does not admit an approximation algorithm with a performance guarantee asymptotically better than O( n_min), where n_min is the cardinality of the smaller bipartition, unless P=NP. 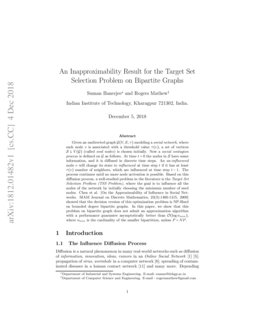 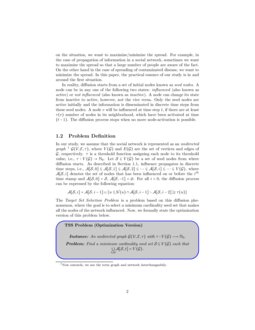 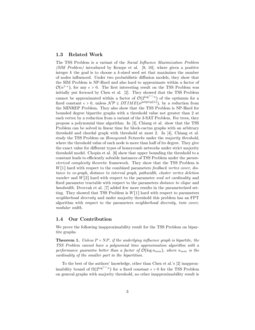 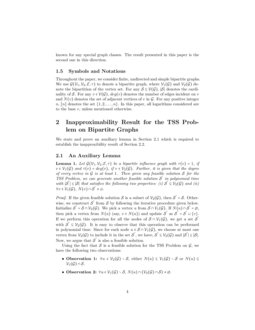 Given a graph G=(V,E), the problem of is to find a sequence of nodes fr...
Rahul Kumar Gautam, et al. ∙

Many systems have to be maintained while the underlying constraints, cos...
Evripidis Bampis, et al. ∙

How to Maximize the Spread of Social Influence: A Survey

Diffusion is a natural phenomenon in many real-world networks such as diffusion of information, innovation, ideas, rumors in an Online Social Network [1] [5]; propagation of virus, wormhole in a computer network [8]; spreading of contaminated diseases in a human contact network [11] and many more. Depending on the situation, we want to maximize/minimize the spread. For example, in the case of propagation of information in a social network, sometimes we want to maximize the spread so that a large number of people are aware of the fact. On the other hand in the case of spreading of contaminated disease, we want to minimize the spread. In this paper, the practical essence of our study is in and around the first situation.

In reality, diffusion starts from a set of initial nodes known as seed nodes. A node can be in any one of the following two states: influenced (also known as active) or not influenced (also known as inactive). A node can change its state from inactive to active, however, not the vice versa. Only the seed nodes are active initially and the information is disseminated in discrete time steps from these seed nodes. A node v will be influenced at time step t, if there are at least τ(v) number of nodes in its neighborhood, which have been activated at time (t−1). The diffusion process stops when no more node-activation is possible.

In our study, we assume that the social network is represented as an undirected graph 111Now onwards, we use the term graph and network interchangaebily. G(V,E,τ), where V(G) and E(G) are the set of vertices and edges of G, respectively. τ is a threshold function assigning each node to its threshold value, i.e., τ:V(G)→N0. Let S⊆V(G) be a set of seed nodes from where diffusion starts. As described in Section 1.1, influence propagates in discrete time steps, i.e., , where A[S,i] denotes the set of nodes that has been influenced on or before the ith time stamp and A[S,0]=S, A[S,−1]=∅. For all i>0, the diffusion process can be expressed by the following equation:

The Target Set Selection Problem is a problem based on this diffusion phenomenon, where the goal is to select a minimum cardinality seed set that makes all the nodes of the network influenced. Now, we formally state the optimization version of this problem below. [frametitle=TSS Problem (Optimization Version), style=MyFrame]

We prove the following inapproximability result for the TSS Problem on bipartite graphs.

Unless P=NP, if the underlying influence graph is bipartite, the TSS Problem cannot have a polynomial time approximation algorithm with a performance guarantee better than a factor of O(lognmin), where nmin is the cardinality of the smaller part in the bipartition.

To the best of the authors’ knowledge, other than Chen et al.’s [2] inapproximability bound of Ω(2log1−ϵn) for a fixed constant ϵ>0 for the TSS Problem on general graphs with majority threshold, no other inapproximability result is known for any special graph classes. The result presented in this paper is the second one in this direction.

Throughout the paper, we consider finite, undirected and simple bipartite graphs. We use G(V1,V2,E,τ) to denote a bipartite graph, where V1(G) and V2(G) denote the bipartition of the vertex set. For any S⊆V(G), |S| denotes the cardinality of S. For any v∈V(G), deg(v) denotes the number of edges incident on v and N(v) denotes the set of adjacent vertices of v in G. For any positive integer n, [n] denotes the set {1,2,…,n}. In this paper, all logarithms considered are to the base e, unless mentioned otherwise.

2 Inapproximability Result for the TSS Problem on Bipartite Graphs

We state and prove an auxiliary lemma in Section 2.1 which is required to establish the inapproxibility result of Section 2.2.

If the given feasible solution S is a subset of V2(G), then S′=S. Otherwise, we construct S′ from S by following the iterative procedure given below. Initialize S′=S∩V2(G). We pick a vertex u from S∩V1(G). If N(u)∩S′=∅, then pick a vertex from N(u) (say, v∈N(u)) and update S′ as S′=S′∪{v}. If we perform this operation for all the nodes of S∩V1(G), we get a set S′ with S′⊆V2(G). It is easy to observe that this operation can be performed in polynomial time. Since for each node u∈S∩V1(G), we choose at most one vertex from V2(G) to include it in the set S′, we have, S′⊆V2(G) and |S′|≤|S|. Now, we argue that S′ is also a feasible solution.

Using the fact that S is a feasible solution for the TSS Problem on G, we have the following two observations:

2.2 An Approximation Preserving Reduction from the Set Cover Problem

In this section, we study the TSS Problem on bipartite graphs and obtain an O(lognmin) factor inapproximability result by a reduction from the classical set cover problem, where nmin is the cardinality of the smaller part in the bipartition. First, we state the optimization version of the set cover problem. [frametitle=Set Cover Problem (Optimization Version), style=MyFrame]

Question: Find a minimum sized sub-collection T′⊆T such that ⋃T∈T′T=X?

An incremental greedy approach, which starts with an empty set and in each iteration picks a subset that covers the maximum number of uncovered elements, yields an Hn=1n+1n−1+⋯+1≃logn factor approximation guarantee and this bound is tight.

[12] Unless P=NP, the set cover problem cannot have a polynomial time approximation algorithm with a performance guarantee better than O(logn).

Next, we state our reduction from the set cover problem to the TSS Problem.

Statement of Theorem 1: “Unless P=NP, if the underlying influence graph is bipartite, the TSS Problem cannot have a polynomial time approximation algorithm with a performance guarantee better than O(lognmin), where nmin is the cardinality of the smaller part in the bipartition.”

We prove this statement by an approximation preserving reduction from the set cover problem. Given an instance (X,T) of the set cover problem with X={x1,x2,…,xn} and T={T1,T2,…,Tm}, we generate a bipartite influence graph G(V1,V2,E,τ) as stated in Construction 1. Let us assume that A is a polynomial time algorithm for the TSS Problem having an approximation guarantee better than a factor of O(lognmin), where nmin is the cardinality of the smaller part in the bipartition. We run the algorithm on the bipartite influence graph and obtain a seed set SA. Now, we construct a seed set S from SA with |S|≤|SA| that satisfies the two properties given in Lemma 1. We know from Lemma 1 that such an S can be constructed in polynomial time. Let, S={Ti1,Ti2,…,Tik}. Then, since S satisfies Property (ii) of Lemma 1 it is easy to observe that {Ti1,Ti2,…,Tik} is a set cover of X of size at most O(logn) of a minimum set cover. Hence, Algorithm A combined with Construction 1 can be used to solve the set cover problem with an approximation guarantee better than a factor of O(logn), which according to Theorem 2 is not possible unless P=NP. ∎