When applying the quasi-Monte Carlo (QMC) method of numerical integration, Koksma's inequality provides a basic estimate of the error in terms of the discrepancy of the used evaluation points and the total variation of the integrated function. We present an improvement of Koksma's inequality that is also applicable for functions with infinite total variation. As a consequence, we derive error estimates for the QMC integration of functions of bounded p-variation. 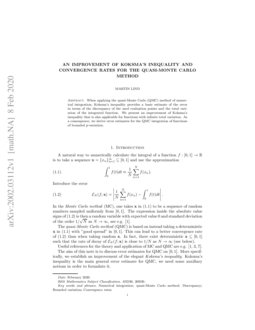 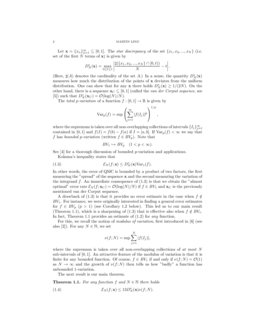 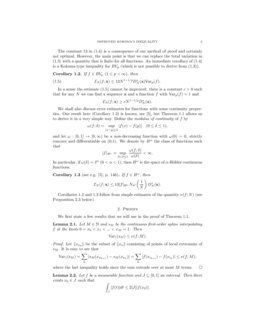 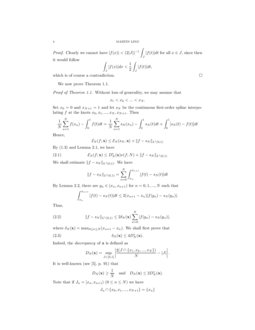 Where are the logs?

In this article we revisit the problem of numerical integration for mono...
Subhasish Basak, et al. ∙

Probability of Error for Detecting a Change in a Parameter, Total Variation of the Posterior Distribution, and Bayesian Fisher Information

A natural way to numerically calculate the integral of a function f:[0,1]→R is to take a sequence x={xn}∞n=1⊆[0,1] and use the approximation

In the Monte Carlo method (MC), one takes x in (1.1) to be a sequence of random numbers sampled uniformly from [0,1]. The expression inside the absolute value signs of (1.2

The quasi-Monte Carlo method (QMC) is based on instead taking a deterministic x in (1.1) with ”good spread” in [0,1]. This can lead to a better convergence rate of (1.2) than when taking random x. In fact, there exist deterministic x⊆[0,1] such that the rate of decay of EN(f;x) is close to 1/N as N→∞ (see below).

(Here, ♯(A) denotes the cardinality of the set A.) In a sense, the quantity D∗N(x) measures how much the distribution of the points of x

deviates from the uniform distribution. One can show that for any

The total p-variation of a function f:[0,1]→R is given by

where the supremum is taken over all non-overlapping collections of intervals {Ij}∞j=1 contained in [0,1] and f(I)=f(b)−f(a) if I=[a,b]. If Varp(f)<∞ we say that f has bounded p-variation (written f∈BVp). Note that

See [4] for a thorough discussion of bounded p-variation and applications.

In other words, the error of QMC is bounded by a product of two factors, the first measuring the ”spread” of the sequence x and the second measuring the variation of the integrand f. An immediate consequence of (1.3) is that we obtain the ”almost optimal” error rate EN(f;xC)=O(log(N)/N) if f∈BV1 and xC is the previously mentioned van der Corput sequence.

A drawback of (1.3) is that it provides no error estimate in the case when f∉BV1. For instance, we were originally interested in finding a general error estimates for f∈BVp  (p>1) (see Corollary 1.2 below). This led us to our main result (Theorem 1.1), which is a sharpening of (1.3) that is effective also when f∉BV1. In fact, Theorem 1.1 provides an estimate of (1.2) for any function.

For this, we recall the notion of modulus of variation, first introduced in [6] (see also [2]). For any N∈N, we set

where the supremum is taken over all non-overlapping collections of at most N sub-intervals of [0,1]. An attractive feature of the modulus of variation is that it is finite for any bounded function. Of course, f∈BV1 if and only if ν(f;N)=O(1) as N→∞ and the growth of ν(f;N) then tells us how ”badly” a function has unbounded 1-variation.

The next result is our main theorem.

For any function f and N∈N there holds

The constant 13 in (1.4) is a consequence of our method of proof and certainly not optimal. However, the main point is that we can replace the total variation in (1.3) with a quantity that is finite for all functions. An immediate corollary of (1.4) is a Koksma-type inequality for BVp (which is not possible to derive from (1.3)).

In a sense the estimate (1.5) cannot be improved: there is a constant c>0 such that for any N we can find a sequence x and a function f with Varp(f)=1 and

We shall also discuss error estimates for functions with some continuity properties. Our result here (Corollary 1.3) is known, see [5], but Theorem 1.1 allows us to derive it in a very simple way. Define the modulus of continuity of f by

Corollaries 1.2 and 1.3 follow from simple estimates of the quantity ν(f;N) (see Proposition 2.3 below).

We first state a few results that we will use in the proof of Theorem 1.1.

be the continuous first-order spline interpolating

Let {xnk} be the subset of {xn} consisting of points of local extremum of sM. It is easy to see that

where the last inequality holds since the sum extends over at most M terms. ∎

Let f be a measurable function and J⊆[0,1] an interval. Then there exists x0∈J such that

which is of course a contradiction. ∎

Without loss of generality, we may assume that

Indeed, the discrepancy of x is defined as

The next result proves the corollaries 1.2 and 1.3.

Let N∈N, then we have

Since ∑Nj=1|Ij|≤1 and ω is non-decreasing, we clearly have

To calculate Mω(N), we use Lagrange multipliers. The critical point (t1,t2,...,tN,λ) of the Lagrangian function solves