An Improved Bound for Security in an Identity Disclosure Problem

Identity disclosure of an individual from a released data is a matter of concern especially if it belongs to a category with low frequency in the data-set. Nayak et al. (2016) discussed this problem vividly in a census report and suggested a method of obfuscation, which would ensure that the probability of correctly identifying a unit from released data, would not exceed t for some 1/3 < t < 1. However, we observe that for the above method the level of security could be extended under certain conditions. In this paper, we discuss some conditions under which one can achieve a security for any 0 < t < 1. 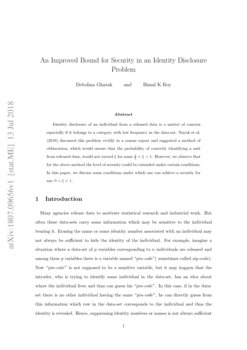 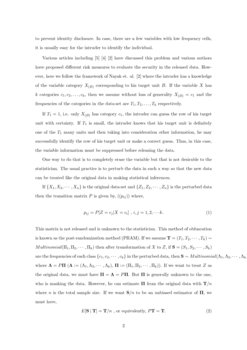 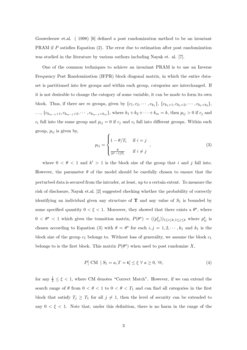 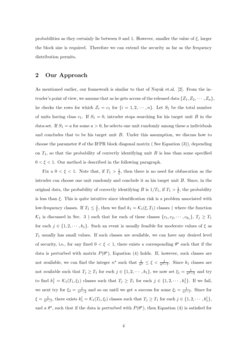 Many agencies release data to motivate statistical research and industrial work. But often these data-sets carry some information which may be sensitive to the individual bearing it. Erasing the name or some identity number associated with an individual may not always be sufficient to hide the identity of the individual. For example, imagine a situation where a data-set of p variables corresponding to n individuals are released and among these p variables there is a variable named “pin-code”( sometimes called zip-code). Now “pin-code” is not supposed to be a sensitive variable, but it may happen that the intruder, who is trying to identify some individual in the data-set, has an idea about where the individual lives and thus can guess his “pin-code”. In this case, if in the data-set there is no other individual having the same “pin-code”, he can directly guess from this information which row in the data-set corresponds to the individual and thus the identity is revealed. Hence, suppressing identity numbers or names is not always sufficient to prevent identity disclosure. In case, there are a few variables with low frequency cells, it is usually easy for the intruder to identify the individual.

Various articles including [5] [4] [2] have discussed this problem and various authors have proposed different risk measures to evaluate the security in the released data. However, here we follow the framework of Nayak et. al. [2] where the intruder has a knowledge of the variable category X(B) corresponding to his target unit B. If the variable X has k categories c1,c2,…,ck, then we assume without loss of generality X(B)=c1 and the frequencies of the categories in the data-set are T1,T2,…,Tk respectively.

One way to do that is to completely erase the variable but that is not desirable to the statistician. The usual practice is to perturb the data in such a way so that the new data can be treated like the original data in making statistical inferences.

is generally unknown to the one, who is masking the data. However, he can estimate

Π from the original data with T/n where n is the total sample size. If we want S/n

to be an unbiased estimator of

Gouweleeuw et.al. ( 1998) [6] defined a post randomization method to be an invariant PRAM if P satisfies Equation (2). The error due to estimation after post randomization was studied in the literature by various authors including Nayak et. al. [7].

One of the common techniques to achieve an invariant PRAM is to use an Inverse Frequency Post Randomization (IFPR) block diagonal matrix, in which the entire data-set is partitioned into few groups and within each group, categories are interchanged. If it is not desirable to change the category of some variable, it can be made to form its own block. Thus, if there are m groups, given by {c1,c2,⋯,ck1}, {ck1+1,ck1+2,⋯,ck1+k2}, …, {ckm−1+1,ckm−1+2,⋯,ckm−1+km}, where k1+k2+⋯+km=k, then pij>0 if cj and ci fall into the same group and pij=0 if cj and ci fall into different groups. Within each group, pij is given by,

where 0<θ<1 and k′>1 is the block size of the group that i and j fall into. However, the parameter θ of the model should be carefully chosen to ensure that the perturbed data is secured from the intruder, at least, up to a certain extent. To measure the risk of disclosure, Nayak et.al. [2] suggested checking whether the probability of correctly identifying an individual given any structure of T and any value of S1 is bounded by some specified quantity 0<ξ<1. Moreover, they showed that there exists a θ⋆, where 0<θ⋆<1 which gives the transition matrix, P(θ⋆)=((p⋆ij))1≤i≤k,1≤j≤k where p⋆ij is chosen according to Equation (3) with θ=θ⋆ for each i,j=1,2,⋯,k1 and k1 is the block size of the group c1 belongs to. Without loss of generality, we assume the block c1 belongs to is the first block. This matrix P(θ⋆) when used to post randomize X,

for any 13≤ξ<1, where CM denotes “Correct Match”. However, if we can extend the search range of θ from 0<θ<1 to 0<θ<T1 and can find all categories in the first block that satisfy Tj≥T1 for all j≠1, then the level of security can be extended to any 0<ξ<1. Note that, under this definition, there is no harm in the range of the probabilities as they certainly lie between 0 and 1. However, smaller the value of ξ, larger the block size is required. Therefore we can extend the security as far as the frequency distribution permits.

As mentioned earlier, our framework is similar to that of Nayak et.al. [2]. From the intruder’s point of view, we assume that as he gets access of the released data {Z1,Z2,⋯,Zn}, he checks the rows for which Zi=c1 for {i=1,2,⋯,n}. Let S1 be the total number of units having class c1. If S1=0, intruder stops searching for his target unit B in the data-set. If S1=a for some a>0, he selects one unit randomly among these a individuals and concludes that to be his target unit B. Under this assumption, we discuss how to choose the parameter θ of the IFPR block diagonal matrix ( See Equation (3)), depending on T1, so that the probability of correctly identifying unit B is less than some specified 0<ξ<1. Our method is described in the following paragraph.

Fix a 0<ξ<1. Note that, if T1>1ξ, then there is no need for obfuscation as the intruder can choose one unit randomly and conclude it as his target unit B. Since, in the original data, the probability of correctly identifying B is 1/T1, if T1>1ξ, the probability is less than ξ. This is quite intuitive since identification risk is a problem associated with low-frequency classes. If T1≤1ξ, then we find k1=K1(ξ,T1) classes ( where the function K1 is discussed in Sec. 3 ) such that for each of these classes {c1,c2,⋯,ck1}, Tj≥T1 for each j∈{1,2,⋯,k1}. Such an event is usually feasible for moderate values of ξ as T1 usually has small values. If such classes are available, we can have any desired level of security, i.e., for any fixed 0<ξ<1, there exists a corresponding θ⋆ such that if the data is perturbed with matrix P(θ⋆), Equation (4) holds. If, however, such classes are not available, we can find the integer n⋆ such that 1n⋆≤ξ<1n⋆−1. Since k1 classes are not available such that Tj≥T1 for each j∈{1,2,⋯,k1}, we now set ξ1=1n⋆−1 and try to find k11=K1(T1,ξ1) classes such that Tj≥T1 for each j∈{1,2,⋯,k11}. If we fail, we next try for ξ2=1n⋆−2 and so on until we get a success for some ξl=1n⋆−l. Since for ξ=1n⋆−l, there exists kl1=K1(T1,ξl) classes such that Tj≥T1 for each j∈{1,2,⋯,kl1}, and a θ⋆, such that if the data is perturbed with P(θ⋆), then Equation (4) is satisfied for any 1n⋆−l<ξ<1. According to Nayak et. al. [2], there is always a solution for ξ≥13 which implies n⋆ can take a minimum value. However, n⋆ can take higher values in many cases.

As discussed earlier, the goal of the paper is to find out a method by which a data can be perturbed ensuring as much security as possible. Since security is an abstract term, we limit ourselves to ensure that the measure, given by Equation (4)) holds for low values of ξ. Smaller the value of ξ, better the security of the data. Let us denote, by R1(a,t), the probability of correctly identifying the individual from released data given S1=a and the frequency distribution of X given by t:=(t1,t2,⋯,tk). In other words,

is bounded by ξ for any a≥0, which signifies that the probability of correctly identifying an individual is less than ξ, no matter how small or large the frequency of category c1 is, in the released data. R1(a,t) is used instead of R1(a) because it is hard to calculate the probability if t is not known. Note that, CM stands for “Correct Match” in the above equations (5) (6).

By our assumption, since the intruder searches his target unit B among the ones with category c1, P[CM|S1=a,Z(B)≠c1,T=t]=0. Again, since, the intruder is assumed to choose randomly one unit among a units to be B, P[CM|S1=a,Z(B)=c1,T=t]=1a for any t. Thus,

is highest, i.e., the odds that

c1 goes to any category other than c1, then the risk of disclosure should be maximum if a=1. We checked that this is quite true which leads us to our first result, stated in the following theorem and the proof is given in Appendix Section.

To proceed further we also need the following lemma, proof of which is deferred in Appendix Section.

To illustrate the process, we simulate a sample of size n=2000 from k=8

Two units in the data-set have Category 1, one of which is unit B=780. Since T1=2, the probability of Correct Match from true data is 0.5 which is very high. We want this probability to be lower, say below ξ=0.1. So, we transform the data to Z using the IPRAM method with a transition matrix P. To choose an ideal P we apply the procedure of this paper. From Table 1, we get the required block size is 6. So, we would apply transition to the first k1=6 categories with the lowest probability of occurrence and do not alter the categories for the rest 2 categories. To solve for h(θ)=ξ, we have θ⋆=1.656854 which gives the transition matrix,

The process thus seems to work well for simulated data.

The method works fine in most practical cases, because, in general, since we want to obfuscate categories with low frequency, there will be sufficient number of categories with higher frequency values than them. Accordingly, the security level can be increased.

However, the greatest drawback of this method of obfuscation is that we have assumed the game of the intruder, i.e., it selects one of the units with the desired categorical value randomly looking at the obfuscated data. But this is not expected to happen since in most cases there will be many regressive variables associated and the selection will not be, in general, random. This problem was also discussed in [4].

However, if the model assumptions hold true, the discussed method is successful in giving a better security.

Writing Σa+1 similarly, we note that there are a+2 terms in the expansion of ~Σa+1−Σ~Σa+β1~Σa.

Thus, it can be clearly seen that,