We give a randomized 1+√(8ln k/k)-approximation algorithm for the minimum k-edge connected spanning multi-subgraph problem, k-ECSM. 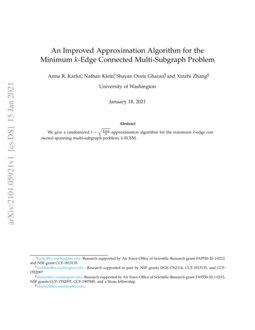 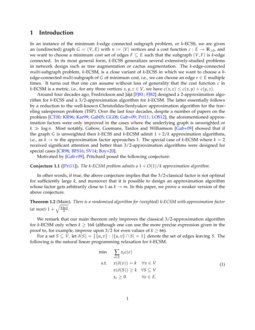 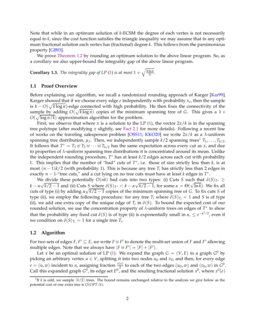 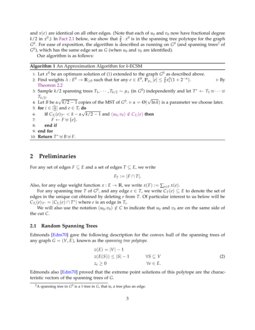 In the Connected Dominating Set problem we are given a graph G=(V,E) and...
Amir Belgi, et al. ∙

In an instance of the minimum k-edge connected subgraph problem, or k-ECSS, we are given an (undirected) graph G=(V,E) with n:=|V| vertices and a cost function c:E→R≥0, and we want to choose a minimum cost set of edges F⊆E such that the subgraph (V,F) is k-edge connected. In its most general form, k-ECSS generalizes several extensively-studied problems in network design such as tree augmentation or cactus augmentation. The k-edge-connected multi-subgraph problem, k-ECSM, is a close variant of k-ECSS in which we want to choose a k-edge-connected multi-subgraph of G of minimum cost, i.e., we can choose an edge e∈E multiple times. It turns out that one can assume without loss of generality that the cost function c in k-ECSM is a metric, i.e., for any three vertices x,y,z∈V, we have c(x,z)≤c(x,y)+c(y,z).

In other words, if true, the above conjecture implies that the 3/2-classical factor is not optimal for sufficiently large k, and moreover that it is possible to design an approximation algorithm whose factor gets arbitrarily close to 1 as k→∞. In this paper, we prove a weaker version of the above conjecture.

There is a randomized algorithm for (weighted) k-ECSM with approximation factor (at most) 1+√8lnkk.

We remark that our main theorem only improves the classical 3/2-approximation algorithm for k-ECSM only when k≥164 (although one can use the more precise expression given in the proof to, for example, improve upon 3/2 for even values of k≥66).

. The following is the natural linear programming relaxation for

Note that while in an optimum solution of k-ECSM the degree of each vertex is not necessarily equal to k, since the cost function satisfies the triangle inequality we may assume that in any optimum fractional solution each vertex has (fractional) degree k. This follows from the parsimonious property [gb93].

Before explaining our algorithm, we recall a randomized rounding approach of Karger [Kar99]. Karger showed that if we choose every edge e

xe, then the sample is k−O(√klogn)-edge connected with high probability. He then fixes the connectivity of the sample by adding O(√klogn) copies of the minimum spanning tree of G. This gives a 1+O(√logn/k) approximation algorithm for the problem.

First, we observe that where x is a solution to the LP (1

is odd, we sample

⌈k/2⌉ trees. The bound remains unchanged relative to the analysis we give below as the potential cost of one extra tree is O(OPT/k). T1,…,Tk/2. It follows that T∗=T1⊎T2⊎⋯⊎Tk/2 has the same expectation across every cut as x, and due to properties of λ-uniform spanning tree distributions it is concentrated around its mean. Unlike the independent rounding procedure, T∗ has at least k/2 edges across each cut with probability 1. This implies that the number of “bad” cuts of T∗, i.e. those of size strictly less than k, is at most (n−1)k/2 (with probability 1). This is because any tree Ti has strictly less than 2 edges in exactly n−1-“tree cuts,” and a cut lying on no tree cuts must have at least k edges in T∗.

We divide these potentially O(nk) bad cuts into two types: (i) Cuts S such that δ(S)T∗≥k−α√k/2−1 and (ii) Cuts S where δ(S)T∗<k−α√k/2−1, for some α=Θ(√lnk). We fix all cuts of type (i) by adding α√k/2−1 copies of the minimum spanning tree of G. To fix cuts S of type (ii), we employ the following procedure: for any tree Ti where δ(S)Ti=1 and S is of type (ii), we add one extra copy of the unique edge of Ti in δ(S). To bound the expected cost of our rounded solution, we use the concentration property of λ-uniform trees on edges of T∗ to show that the probability any fixed cut δ(S) is of type (ii) is exponentially small in α, ≤e−α2/2, even if we condition on δ(S)Ti=1 for a single tree Ti.

For two sets of edges F,F′⊆E, we write F⊎F′ to denote the multi-set union of F and F′ allowing multiple edges. Note that we always have |F⊎F′|=|F|+|F′|.

Let x be an optimal solution of LP (1). We expand the graph G=(V,E) to a graph G0 by picking an arbitrary vertex u∈V, splitting it into two nodes u0 and v0, and then, for every edge e=(u,w) incident to u, assigning fraction x(e)2 to each of the two edges (u0,w) and (v0,w) in G0. Call this expanded graph G0, its edge set E0, and the resulting fractional solution x0, where x0(e) and x(e) are identical on all other edges. (Note that each of u0 and v0 now have fractional degree k/2 in x0.) In creftype 2.1 below, we show that 2k⋅x0 is in the spanning tree polytope for the graph G0. For ease of exposition, the algorithm is described as running on G0 (and spanning trees222A spanning tree in G0 is a 1-tree in G, that is, a tree plus an edge. of G0), which has the same edge set as G (when u0 and v0 are identified).

Our algorithm is as follows:

For any spanning tree T of G0, and any edge e∈T, we write CT(e)⊆E to denote the set of edges in the unique cut obtained by deleting e from T. Of particular interest to us below will be CTi(e)T∗=|CTi(e)∩T∗| where e is an edge in Ti.

We will also use the notation (u0,v0)∉C to indicate that u0 and v0 are on the same side of the cut C.

Edmonds also [Edm70] proved that the extreme point solutions of this polytope are the characteristic vectors of the spanning trees of G.

Let x be the optimal solution of LP (1) and x0 its extension to G0 as described above. Then 2k⋅x0 is in the spanning tree polytope (2) of G0.

Given nonnegative edge weights λ:E→R≥0, we say a distribution μλ over spanning trees of G is λ-uniform, if for any spanning tree T,

There is a polynomial-time algorithm that, given a connected graph G=(V,E), and a point z∈R|E| in the spanning tree polytope (2) of G=(V,E), returns λ:E→R≥0 such that the corresponding λ-uniform spanning tree distribution μλ satisfies

i.e., the marginals are approximately preserved. In the above T is the set of all spanning trees of G.

We say BS(q) is a Bernoulli-Sumrandom variable if it has the law of a sum of independent Bernoullis, say B1+B2+⋯+Bt for some t≥1, with E[B1+⋯+Bt]=q.

3 Analysis of the Algorithm

In this section we prove Theorem 1.2. We first observe that the cuts of G are precisely the cuts of G0 that have u0 and v0 on the same side of the cut, and for any such cut the set of edges crossing the cut in G and in G0 is the same (once u0 and v0 are contracted). We begin by showing that the output of Algorithm 1 is k-edge connected (in G) with probability 1.

Lemma 3.1 (k-Connectivity of the Output).

For any α≥0, the output of Algorithm 1, F⊎B⊎T∗ is a k-edge connected subgraph of G.

where the randomness is over spanning trees T1,⋯,Ti−1,Ti+1,⋯,Tk/2 independently sampled from μλ.

Averaging over all realizations of Ti satisfying the required conditions proves the lemma. ∎

Let x be an optimum solution of LP (1). Since the output of the algorithm is always k-edge connected we just need to show E[c(F∪T∗∪B)]≤(1+√8lnkk)c(x). By linearity of expectation,