An implementation of the relational k-means algorithm

A C# implementation of a generalized k-means variant called relational k-means is described here. Relational k-means is a generalization of the well-known k-means clustering method which works for non-Euclidean scenarios as well. The input is an arbitrary distance matrix, as opposed to the traditional k-means method, where the clustered objects need to be identified with vectors. 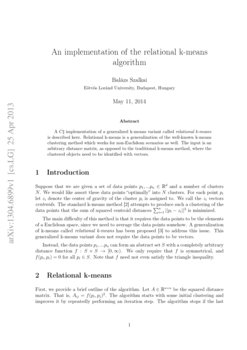 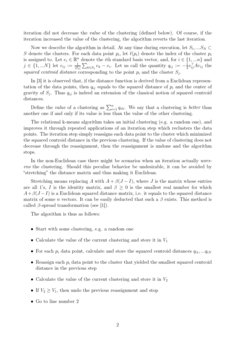 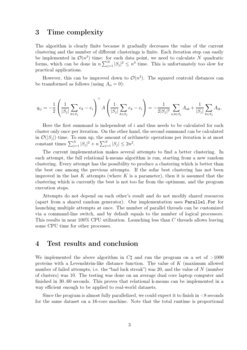 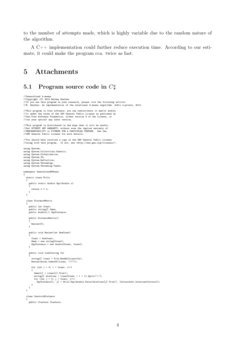 Clustering is a separation of data into groups of similar objects. Every...
P. Ashok, et al. ∙

Suppose that we are given a set of data points p1,...pn∈Rd and a number of clusters N. We would like assort these data points “optimally” into N clusters. For each point pi let zi denote the center of gravity of the cluster pi is assigned to. We call the zi vectors centroids. The standard k-means method [2] attempts to produce such a clustering of the data points that the sum of squared centroid distances ∑ni=1||pi−zi||2 is minimized.

Instead, the data points p1,...pn can form an abstract set S with a completely arbitrary distance function f:S×S→[0,∞). We only require that f is symmetrical, and f(pi,pi)=0 for all pi∈S. Note that f need not even satisfy the triangle inequality.

Now we describe the algorithm in detail. At any time during execution, let S1,...SN⊂S denote the clusters. For each data point pi, let ℓ(pi) denote the index of the cluster pi is assigned to. Let ei∈Rn denote the ith standard basis vector, and, for i∈{1,...n} and j∈{1,...N} let vij:=1|Sj|∑k∈Sjek−ei. Let us call the quantity qij:=−12v⊤ijAvij the squared centroid distance corresponding to the point pi and the cluster Sj.

In [3] it is observed that, if the distance function is derived from a Euclidean representation of the data points, then qij equals to the squared distance of pi and the center of gravity of Sj. Thus qij is indeed an extension of the classical notion of squared centroid distances.

The relational k-means algorithm takes an initial clustering (e.g. a random one), and improves it through repeated applications of an iteration step which reclusters the data points. The iteration step simply reassigns each data point to the cluster which minimized the squared centroid distance in the previous clustering. If the value of clustering does not decrease through the reassignment, then the reassignment is undone and the algorithm stops.

In the non-Euclidean case there might be scenarios when an iteration actually worsens the clustering. Should this peculiar behavior be undesirable, it can be avoided by “stretching” the distance matrix and thus making it Euclidean.

Stretching means replacing A with A+β(J−I), where J is the matrix whose entries are all 1’s, I

The algorithm is thus as follows:

The algorithm is clearly finite because it gradually decreases the value of the current clustering and the number of different clusterings is finite. Each iteration step can easily be implemented in O(n3) time: for each data point, we need to calculate N quadratic forms, which can be done in n∑Nj=1|Sj|2≤n3 time. This is unfortunately too slow for practical applications.

However, this can be improved down to O(n2). The squared centroid distances can be transformed as follows (using Aii=0):

Here the first summand is independent of i and thus needs to be calculated for each cluster only once per iteration. On the other hand, the second summand can be calculated in O(|Sj|) time. To sum up, the amount of arithmetic operations per iteration is at most constant times ∑Nj=1|Sj|2+n∑Nj=1|Sj|≤2n2.

The current implementation makes several attempts to find a better clustering. In each attempt, the full relational k-means algorithm is run, starting from a new random clustering. Every attempt has the possibility to produce a clustering which is better than the best one among the previous attempts. If the sofar best clustering has not been improved in the last K attempts (where K is a parameter), then it is assumed that the clustering which is currently the best is not too far from the optimum, and the program execution stops.

Attempts do not depend on each other’s result and do not modify shared resources (apart from a shared random generator). Our implementation uses Parallel.For for launching multiple attempts at once. The number of parallel threads can be customized via a command-line switch, and by default equals to the number of logical processors. This results in near 100% CPU utilization. Launching less than C threads allows leaving some CPU time for other processes.

We implemented the above algorithm in C♯ and run the program on a set of >1000 proteins with a Levenshtein-like distance function. The value of K (maximum allowed number of failed attempts, i.e. the “bad luck streak”) was 20, and the value of N (number of clusters) was 10. The testing was done on an average dual core laptop computer and finished in 30..60 seconds. This proves that relational k-means can be implemented in a way efficient enough to be applied to real-world datasets.

Since the program is almost fully parallelized, we could expect it to finish in <8 seconds for the same dataset on a 16-core machine. Note that the total runtime is proportional to the number of attempts made, which is highly variable due to the random nature of the algorithm.

A C++ implementation could further reduce execution time. According to our estimate, it could make the program cca. twice as fast.

The first n lines of the input contain the names of the objects which need to be clustered. Then a line containing two slashes follows. After that, a matrix containing the pairwise distances is listed in semicolon-separated CSV format. Fractional distances must be input with the dot character (.) as decimal separator.