An hp-adaptive strategy for elliptic problems

In this paper a new hp-adaptive strategy for elliptic problems based on refinement history is proposed, which chooses h-, p- or hp-refinement on individual elements according to a posteriori error estimate, as well as smoothness estimate of the solution obtained by comparing the actual and expected error reduction rate. Numerical experiments show that exponential convergence can be achieved with this strategy. 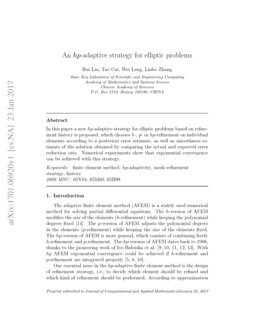 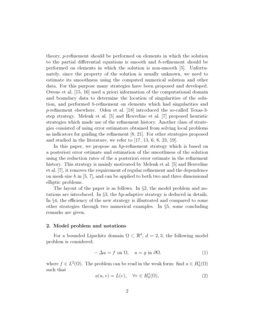 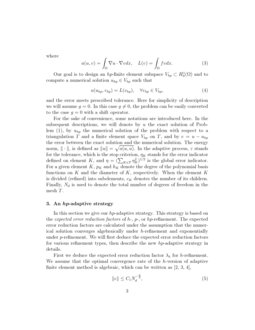 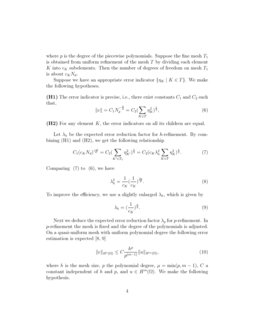 Anisotropic a posteriori error estimate for the Virtual Element Method

A posteriori verification of the positivity of solutions to elliptic problems

The purpose of this paper is to develop a unified a posteriori method fo...
Kazuaki Tanaka, et al. ∙

proposed heuristic strategies which made use of the refinement history. Another class of strategies consisted of using error estimators obtained from solving local problems as indicators for guiding the refinement

anis ; dem2 . For other strategies proposed and studied in the literature, we refer to affia ; gui ; melenk1 ; anis ; paul ; mavr .

In this paper, we propose an hp-refinement strategy which is based on a posteriori error estimate and estimation of the smoothness of the solution using the reduction rates of the a posteriori error estimate in the refinement history. This strategy is mainly motivated by Melenk et al. melenk and Heuveline et al. rannacher , it removes the requirement of regular refinement and the dependence on mesh size h in melenk ; rannacher , and can be applied to both two and three dimensional elliptic problems.

The layout of the paper is as follows. In §2, the model problem and notations are introduced. In §3, the hp-adaptive strategy is deduced in details. In §4, the efficiency of the new strategy is illustrated and compared to some other strategies through two numerical examples. In §5, some concluding remarks are given.

For a bounded Lipschitz domain Ω⊂Rd, d=2,3, the following model problem is considered:

and the error meets prescribed tolerance. Here for simplicity of description we will assume g=0. In this case g≠0, the problem can be easily converted to the case g=0 with a shift operator.

For the sake of convenience, some notations are introduced here. In the subsequent descriptions, we will denote by u the exact solution of Problem (1), by uhp the numerical solution of the problem with respect to a triangulation T and a finite element space Vhp on T, and by e=u−uhp the error between the exact solution and the numerical solution. The energy norm, ∥⋅∥, is defined as ∥u∥=√a(u,u). In the adaptive process, ε stands for the tolerance, which is the stop criterion, ηK stands for the error indicator defined on element K, and η=(∑K∈Tη2K)1/2 is the global error indicator. For a given element K, pK and hK denote the degree of the polynomial basis functions on K and the diameter of K, respectively. When the element K is divided (refined) into subelements, cK denotes the number of its children. Finally, Nd

First we deduce the expected error reduction factor λh for h-refinement. We assume that the optimal convergence rate of the h-version of adaptive finite element method is algebraic, which can be written as zhoua ; fernan ; cascon ,

where p is the degree of the piecewise polynomials. Suppose the fine mesh T1 is obtained from uniform refinement of the mesh T by dividing each element K into cK subelements. Then the number of degrees of freedom on mesh T1 is about cKNd.

Suppose we have an appropriate error indicator {ηK∣K∈T}. We make the following hypotheses.

(H1) The error indicator is precise, i.e., there exist constants C1 and C2 such that,

(H2) For any element K, the error indicators on all its children are equal.

Let λh be the expected error reduction factor for h-refinement. By combining (H1) and (H2), we get the following relationship

To improve the efficiency, we use a slightly enlarged λh, which is given by

Next we deduce the expected error reduction factor λp for p-refinement. In p-refinement the mesh is fixed and the degree of the polynomials is adjusted. On a quasi-uniform mesh with uniform polynomial degree the following error estimation is expected anis ; suri

where h is the mesh size, p the polynomial degree, μ=min(p,m−1), C a constant independent of h and p, and u∈Hm(Ω). We make the following hypothesis.

When the degree p is increased by one, by (H3) we have

Finally the expected error reduction factor λhp for hp-refinement can readily be obtained by combining λh and λp, which is given by

As a widely accepted criterion in adaptive finite element methods, the error should be distributed asymptotically uniformly over all elements melenk . Therefore, elements with large error estimator should be marked for refinement. Here we employ the so-called maximum strategy, which can be described as follows

where α∈(0,1) is a predetermined parameter.

Our hp-adaptive strategy is given below, which is motivated by Heuveline et al. rannacher and Melenk et al. melenk , using a similar framework. Here h-refinement means dividing the element into cK subelements, p-refinement means increasing the polynomial degree by 1.

We have implemented our new hp-adaptive strategy using the parallel adaptive finite element toolbox PHG phg . The computations were performed on the cluster LSSC-III of the State Key Laboratory of Scientific and Engineering Computing, Chinese Academy of Sciences.

In these examples, since bisection refinement is used for h-refinement, we have cK=2, thus the expected error reduction factors are given by

where fpK is the L2(K)-projection of the function f on the space of polynomials of degree pK−1, hf denotes the diameter of the face f, pf=max(pK1,pK2), where K1 and K2 are the two elements sharing the face f, and [⋅] denotes the jump of a function across the face f.

The parameter α in the maximum strategy is chosen as 0.5. The linear systems of equations are solved by the PCG (Preconditioned Conjugate Gradient) method with a block Jacobi preconditioner. The initial meshes are generated using NETGEN netgen and the initial polynomial degrees on all elements are set to 2.

where γ is a constant.

. The main difficulty in applying high order finite element methods to this problem is that the even and odd derivatives of the solution behave differently at each point in the domain, hence pure

p-refinement may not improve the numerical solution zib . The initial mesh is uniform with 144 elements.

The convergence histories and final meshes are shown in Figure 2 and Table 2 respectively. Again for this example, the h-version converges algebraically while the two hp-versions converge exponentially. Data in Table 2 shows that the performance of our strategy is much better than that of the HP/MK strategy.

A simple and easy to implement hp-adaptive strategy based on error reduction prediction is proposed. This strategy is suitable for two and three dimensional problems. The efficiency of the strategy is demonstrated through two numerical examples. Although the strategy is discussed with the Poisson equation in this paper, it is applicable to general elliptic problems. It also provides a general framework which can be easily extended to other problems.