An extension of the Plancherel measure

Given a distribution in the unite square and having iid sample from it the first question what a statistician might do to test the hypothesis that the sample is iid. For this purpose an extension of the Plancherel measure is introduced. Recent literature on asymptotic behavior of Plancherel measure is discussed with extension to the new set up. Models for random permutations are described and the power of different tests is compared. 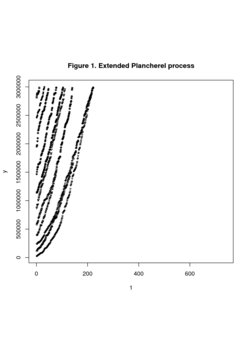 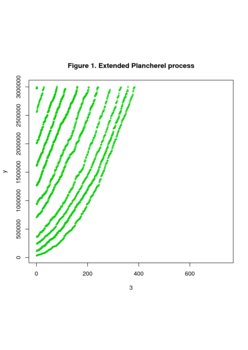 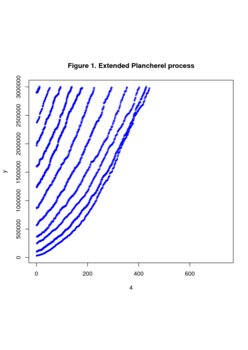 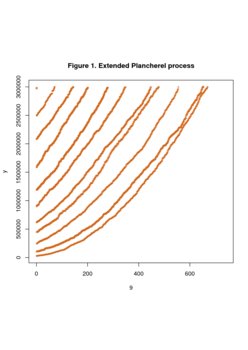 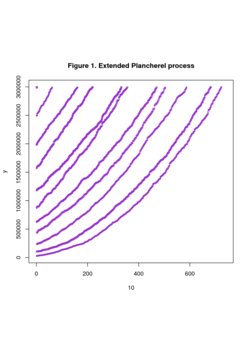 be iid uniform random variables on

for all n=1,2,… starting with s(0)=0. Here s(n) is the number of levels, λ1(n),…,λs(n)(n) are the Young numbers and Yk,t(n) are the new positions for the numbers X(1),…,X(n). Note that the data do not change in course of the algorithm only we introduce a combinatorial structure reflecting their value and order. The process Y=Y(n),n=1,2,… is a dynamically structured ordered sample.

The random variables s(1),s(2),… generated by the X(n) sequence will be monotone non decreasing and for each level k the positions Yk,t(n) have the property of monotonicity;

The narrative of the algorithm is the following. For each n the new number X(n) sits down on the first level to its place assigned according to its order of magnitude among the X-s. If there are any Y on the first level greater then the newcomer then X(n) pushes up the first Y being larger then X(n). On the next level the algorithm is repeated: the new number sits down on the place ordered for it according to its magnitude and pushes up the first Y on its level being larger.

For i=1,…,n we denote by κi(n) the level of the ith number in the ordered sample after arriving the number X(n), and by κ(n) the whole sequence.

for 4 and 5. The result is called standard Young tableau: it is monotone increasing both in row and column. These numbers are determined by the rank numbers of the X(i)-s: 5,2,11,9,8,1,3,10,4,7,6. We call the κ sequence generated by the rank numbers the level process of a permutation. Next table shows the evolution of the κ sequences. Here, for the sake of clarity, we use the inverse rank numbers in place of the sliding elements and we supplant with zeros the sleeping ones.

The first element of the permutation is 5 so we put the number 1 in the fifth column. Other elements remain zero.

The second element is 2 (unfortunately) but this coincidence does not make any complication: we put a 2 in the second column and in the fifth, too.

The third is 11 hence in the eleventh column appears the number 3.

The fourth is 9 and the number 4 looks up in the ninth and the eleven column on the appropriate level.

The fifth element is 8: the number 5 goes to the eighth column (and not 8 in fifth).

And so on. The number of rank numbers leading to this κ(11) sequence is determined by the so called hook numbers of the tableau:

We know that 11! is divisible by the product of these numbers and the quotient 2310 is the number of the rank numbers resulting to our κ(11). Surprisingly the number of κ(11)s resulting the same λ(11) sequence is 2310, too. The explanation is that the inverse of a permutation results in a κ determining the same λ as the κ of the permutation and the two κs determine uniquely the permutation. This fact leads to the Plancherel distribution. The question is the joint density of the numbers Y(n) and the limiting behavior of the process when n goes to infinity. The average divided by √n

and the standard deviation of

LP=−ln(p) of the Plancherel distribution for some n are the followings:

comes from uniform distribution in

The shape of the curves follow such a well pronounced lines only when the corresponding Plancherel probability is close to its expected value. It means that the sample elements are independent. We think that the process Y(n) offers an appropriate statistics for testing independence with identical distribution.

In next table some parameters are given for n=114 on Ornstein-Uhlenbeck process.

changes a bit but the quantile transformation offers the appropriate chain between the two cases thus we use the same notation. The distribution of

Y1,1(n) is exponential with parameter 1/n hence we investigate the rescaled process

One can hope that the distribution of the process stabilizes as n goes to infinity; we call the limit extended Plancherel distribution.

The statistics S defined as n! divided by the product of hook numbers counts all permutations belonging to the same level process. The minimum of this number is one: there are two permutations being uniquely determined by their level process. The maximum of the statistics is close to √n!. Let us sum up for a fixed n for all integer C the number of permutations belonging to S between exp(C−0.5) and exp(C+0.5). Then for most C the result is positive: in such cases it has to be larger than exp(2C). Surprisingly the distribution is concentrated in a narrow interval containing the permutations what we call typical (see [17]).

If n=11 then there are 56 Young tableaux and among them 27 has larger Plancherel probability than 0.0076. Their total probability is 0.951, thus we propose the test that accepts the uniform distribution of a random permutation if the corresponding Young tableau is an element of this set with 27 elements given in the next table.

Proper random permutations have a simple parametrization: for all subset G of the set H={1,…,n}

there is a probability distribution. Defining the elements of the random permutation step by step we use the distribution on the subset of the remaining elements.

where A=ai,k is a real valued n×n matrix. We call the model checkerboard. In case we have only one permutation even the inference of such a simple model is out of question without further structural assumptions on the matrix A. The graph of the two dimensional points (i,π(i),i=1,…,n) is a simple pictorial statistics of a permutation. If we can figure out any structure in the graph the permutation is certainly not random and there is a hope to fit a matrix A

with relatively small number of degree of freedom.

Suppose we have a two-dimensional random variable (X,U), then we can construct the same processes Vi,τi from iid sequence Ui as we have done from Xi

and the pair of processes may reflect the joint distribution of

A possible way is the extension of Lovász’s graphons, see [11], [13] and [7]. The idea is to order to all subset A with k elements of a permutation π(i) of the first n integer the rank numbers corresponding to the numbers π(i),i∈A.

One face of a permutation is that it represents a dynamics: πi means that number i moves to number πi what makes sense even in case πi=i. Using cyclically the neighboring pairs πi,πi+1 we can define a new permutation δ as

The attractors of this dynamics may reflect the complexity of π.

In nonparapetric statistics the sample elements are supplanted by their rank numbers [21], [3] and [8] and the typical resampling method is the use of random permutations on some parts of the sample. We are trying to bridge this traditional field of statistics with Plancherel measure.

Victor Reiner, Franco Saliola and Volkmar Welker initiate the use of k elements subsets of a permutation without supplanting the elements with their rank numbers [18]

. They conjecture that all the square of the singular values of the matrix joining these parts with the original permutations are integers.

For arbitrary real t let us define the distribution Pt by

9 Where does the information come from?

Once upon a time, fifty years ago, there was a conference in Debrecen. At this conference Shinzo Watanabe gave a lecture with the title we are using here again ([22]). The truth is that our world was originally full of information. Ir was the Demiurge who filtered out superfluous parts of this information and imposed pre-existing Forms on the chaotic material. At the above mentioned conference Imre Csiszár, Gyula Katona an Gábor Tusnády proved the conservation of entropy. Now we think that the controlled loss of information makes the trick: when we reduce a permutation to its level process we condensate the information of the permutation in a proper way.

Many thanks to Imre Csiszár for providing us the privilege to receive and benefit from many wise advice given us by him throughout our life and, in particular, for insightfully encouraging us to write on the present theme a paper that we are pleased to dedicate to him on the occasion of his 80th birthday, and to wish him happy returns in an arbitrarily long life in good health and spirits.