Significant advances in deep learning have obtained hallmark accuracy rates for various computer vision applications. However, advances in deep generative models have also led to the generation of very realistic fake content, also known as deepfakes, causing a threat to privacy, democracy, and national security. Most of the current deepfake detection methods are deemed as a binary classification problem in distinguishing authentic images or videos from fake ones using two-class convolutional neural networks (CNNs). These methods are based on detecting visual artifacts, temporal or color inconsistencies produced by deep generative models. However, these methods require a large amount of real and fake data for model training and their performance drops significantly in cross dataset evaluation with samples generated using advanced deepfake generation techniques. In this paper, we thoroughly evaluate the efficacy of deep face recognition in identifying deepfakes, using different loss functions and deepfake generation techniques. Experimental investigations on challenging Celeb-DF and FaceForensics++ deepfake datasets suggest the efficacy of deep face recognition in identifying deepfakes over two-class CNNs and the ocular modality. Reported results suggest a maximum Area Under Curve (AUC) of 0.98 and an Equal Error Rate (EER) of 7.1 on the Celeb-DF dataset. This EER is lower by 16.6 obtained for the two-class CNN and the ocular modality on the Celeb-DF dataset. Further on the FaceForensics++ dataset, an AUC of 0.99 and EER of 2.04 obtained. The use of biometric facial recognition technology has the advantage of bypassing the need for a large amount of fake data for model training and obtaining better generalizability to evolving deepfake creation techniques. 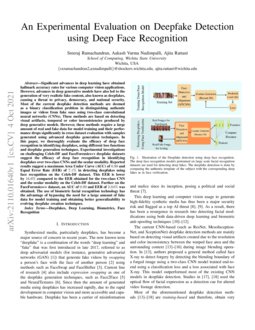 Beyond the Spectrum: Detecting Deepfakes via Re-Synthesis

The rapid advances in deep generative models over the past years have le...
Yang He, et al. ∙

As we enter into the AI era, the proliferation of deep learning approach...
Umur Aybars Ciftci, et al. ∙

How Do the Hearts of Deep Fakes Beat? Deep Fake Source Detection via Interpreting Residuals with Biological Signals

Synthesized media, particularly deepfakes, has become a major source of concern in recent years. The now known term “deepfake” is a combination of the words “deep learning” and “fake” that was first introduced in late 2017

[12]) that generate fake videos by swapping a person’s face with the face of another person [9] using methods such as FaceSwap and FaceShifter [18]. Current line of research [32] also include expression swapping as one of the deepfake generation techniques, such as Face2Face [30] and NeuralTextures [31]. Since then the amount of generated media using deepfakes has increased rapidly, due to the rapid development in computer vision and more accessible and capable hardware. Deepfake has been a carrier of misinformation and malice since its inception, posing a political and social threat [6].

This deep learning and computer vision usage to generate high-fidelity synthetic media has thus been a major security risk and flagged as a top AI threat [15, 5]. As a result, there has been a resurgence in research into detecting facial modifications using both data-driven deep learning and biometric anti-spoofing techniques [16, 25, 27].

The current CNN-based (such as ResNet, MesoInceptionNet, and XceptionNet) deepfake detection methods are mainly based on detecting visual artifacts created due to the resolution and color inconsistency between the warped face area and the surrounding context [19, 20, 1, 29] during image blending operation. In [19], authors proposed a general method called face X-ray to detect forgery by detecting the blending boundary of a forged image using a two-class CNN model trained end-to-end using a classification loss and a loss associated with face X-ray. This model outperformed most of the existing CNN models in deepfake detection. Studies in [4, 7] used the optical flow of facial expression as a detection cue for altered video footage detection.

Most of the aforementioned deepfake detection methods [19, 20, 1, 29, 4, 7] are training-based and therefore, obtain very high performance in intra-dataset evaluation with an AUC of about 0.99. However, they obtain poor generalization to high-quality fakes generated due to evolving deepfake generation techniques in cross-dataset evaluation, thus, obtaining an AUC of about 0.70.

Media articles such as [5, 23] suggest the use of biometric technology in identifying deepfakes. Recently in 2020, Nguyen and Derakhshani [25] used ocular-based biometric matching to distinguish between real and fake images of identities using CNNs namely, lightCNN, ResNet, DenseNet and SqueezeNet trained for ocular-based user recognition. In [22], biometric tailored loss functions [22] (such as, Center, ArcFace, and A-Softmax) are used for two-class CNN training for deepfake detection. Worth mentioning, the study in [22] used only face recognition tailored loss functions in CNN training but not face recognition technology in detecting deepfakes.

With the advances in deepfake generation techniques, visual artifacts or other inconsistencies become progressively indistinguishable

in high quality and high-resolution deepfakes, but facial features are corrupted due to the swapping and image blending operation. Therefore, face recognition may be preferable in detecting fake images by matching corrupted feature vectors of the swapped face with the original templates of the target identity. A minimal analysis was carried out in

on a first generation dataset using 129 measures of face image quality which include signal to noise ratio, specularity, blurriness, etc., along with Support Vector Machine for deepfake detection. Studies in

into which deepfake generation techniques could be effectively detected by face recognition technology and the optimum loss functions to be used. This work has the advantage of bypassing the need for model training on fake images. However, the identity labels are required for biometric comparison (template and query image comparison) in deepfake detection. Figure

In summary, the main contributions of this paper are as follows:

This paper is organized as follows: Section II discusses the methods for deepfake generation. Section III presents the dataset and the experimental protocol. Results and discussion are presented in section IV. Conclusions and future work are discussed in section V.

In this section, we will discuss various methods used for deepfake creation [32, 24]. Depending on the level of manipulation, these deepfake creation methods can be broadly categorized as Identity Swap and Expression Swap [32].

In this section, we discuss the datasets used and the experimental protocol followed for deepfake detection using face recognition technology.

These datasets are described as follows:

We used the popular ResNet [14] architecture as it is widely used for face recognition. ResNet is a short form of residual network based on the idea of “identity shortcut connection” where input features may skip certain layers [14]. In this study, we used ResNet-50 which has 23.5M parameters. ResNet-50 [14] is trained from scratch on MS1M-Arcface [13, 10] and WebFace12M dataset [36]. The MS1M-Arcface dataset [10], is a cleaned version of the MS1M dataset [13], containing around 5.8 million images from 85,742 subjects. The WebFace12M dataset [36], is a cleaned version and subset of the complete WebFace260M dataset [36], which contains around 12M face images from 600K identities. The face images were detected and aligned using MTCNN [35]. MTCNN utilizes a cascaded CNNs based framework for joint face detection and alignment. The images are then resized to 112×112 for both training and evaluation. The model was trained using six different loss functions i.e., ArcFace [10], CosFace [34], SphereFace [34], Combined Margin [10], Triplet loss [10] and SoftMax. ArcFace, SphereFace and CosFace loss functions learn intra-class similarity and inter-class diversity for performance enhancement.

model, the batch-normalization layer followed by the last fully connected layer of size

512 and the final output layer equal to the number of classes (subjects) were used. The angular margin penalty hyper-parameters m1, m2 and m3 was set to 1, 0.3 and 0.2

for the combined margin. The networks were trained using a Stochastic Gradient Descent (SGD) optimizer with a batch size of

64 for 25epochs. The learning rate was set equal to 0.1 at the onset and was divided at 100K, 160K iterations, and finish at 180K iterations following the original ArcFace [10] implementation. We also set the momentum to 0.9 and weight decay to 5e−4. All the experiments are conducted on an Intel Xeon processor and two Nvidia Quadro RTX 6000 GPUs.

real and fake face images randomly selected per subject. Depending on the dataset’s multiple videos per subject (CelebDF, DFD (subset of FF++)) or single video per subject (FF++) are used to create pairs of frames. From the gallery and probe set of all the subjects, deep features of size

Table I shows the deepfake detection performance in terms of Equal Error Rate (EER) and AUC evaluated on Celeb-DF and FaceForensics++ datasets, using face recognition ResNet-50 model pretrained on MS1M-ArcFace and WebFace12M dataset. The top performance results are highlighted in bold for both the training datasets and across the different deepfake generation techniques.

As can be seen from the table, Identity swapping methods namely, FaceSwap, FaceShifter, and Faceswap-Kowalski obtain AUC close to 1 and EER of 3.29% on an average, demonstrating the efficiency of face recognition in detecting fakes created using these methods. The deepfake methods based on autoencoders also obtained a high AUC score of about 0.97. This demonstrates that even high-quality deepfakes without apparent visual artifacts, such as those in Celeb-DF datasets, have their facial features corrupted using blending operation used in face-swapping techniques. These corrupted facial features are efficiently detected using a face recognition algorithm by matching original templates to the deepfake images of the target identity. The obtained results using face recognition technology significantly outperformed the ocular recognition for deepfake detection [25] by 13.6% using subject-disjoint evaluation on CelebDF. The obtained results are also better than the popular two-class CNN-based Face-Xray model [19] by 19.6% on the Celeb-DF dataset (see Table I). The Face-Xray model was chosen for comparison because it outperformed other CNN models in [19]. Note that the existing studies [3, 2, 11, 8] on using behavioral biometrics (such as facial expression and head-pose movement) for deepfake detection, performed a very limited evaluation on identity swapping based deep fake generation techniques and reported only AUC score. Therefore, we did not use these studies for cross-comparison.

Expression swapping methods namely, Face2Face and NeuralTextures obtained the least performance with EER of 27.61% and 48.37%, respectively, for the best case. The obtained EER is about  32.5% higher than those obtained for identity swapping techniques. The NeuralTextures approach further obtained lower performance over Face2Face, because it primarily altered the face expression that corresponded to the mouth region resulting in less deformed facial discriminators. Face2Face uses a re-targeting and warping procedure to swap expressions, leaving many of the original facial features intact, resulting in the facial recognition model failing in detecting deepfakes. Thus, facial recognition technology is not effective in detecting deepfake generated using expression swapping methods. This is primarily due to the fact that only expression is changed keeping the identity features intact. Experiments on the FF++ dataset suggest that even within the same environment and conditions (i.e. by using single video per subject), expression-swapping methods severely underperform. The experimental results also suggest that the dataset used for training face recognition model (i.e., MS1M-ArcFace and WebFace12M) has no impact on deepfake detection accuracy evaluated on Celeb-DF and FaceForensics++ deepfake datasets.

Figure 2 shows the t-SNE [33] visualization of the deep feature embeddings (number of components = 2 for real and fake images) from FaceSwap, NeuralTextures and Deepfakes based fake creation techniques. There is a clear separation between facial features from genuine and deepfakes for the FaceSwap approach. A similar observation was obtained for other identity swapping methods as well. However, the real and fake features overlap when using expression swapping approaches, as can be seen for the NeuralTexture method.

Another noteworthy finding from these visualizations is that for Deepfakes, which are based on auto-encoders, deep features are considerably more spread out than the other approaches indicating the lack of consistency across different frames of the same subject. Figure 3 shows the histogram of the genuine and deepfake scores distribution obtained on comparing the templates with real and fake images using different deepfake generation techniques. Similar to t-SNE based visualization, expression swapping methods obtained higher overlap in genuine and deepfake distribution over identity swapping methods.