Approximating data points in three or higher dimension space based on cubic B-spline curve is presented. Representations for planar curves, are merged and extended to the higher dimension. The curve is fitted to the order of data points, or uniform parameter values are assumed for the points. Tangents are assumed at the data points, corresponding to the property used in cardinal splines, for shape preserving and visually pleasing fit. Control points of piecewise continuous cubic bezier curves, meeting the boundary conditions of cardinal spline segments, are used for b-spline curve in corresponding coordinate planes. Approximation using error computed in the least square sense, based on a fraction of data points, is also presented. 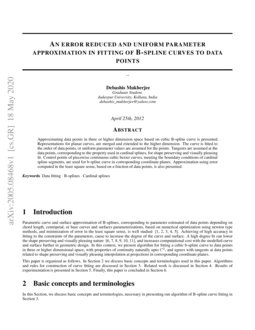 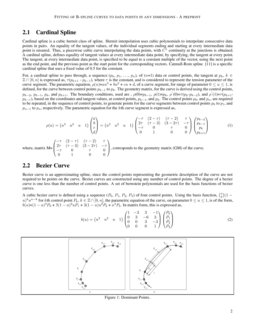 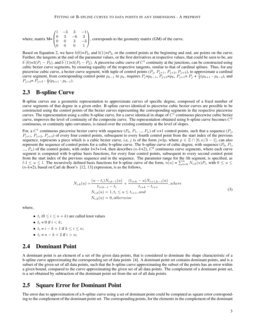 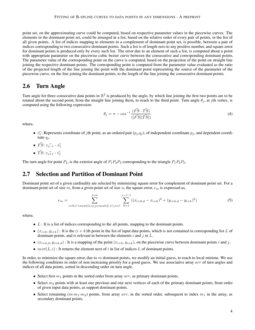 We present a method to compute a fitting curve B to a set of data points...
Pierre-Yves Gousenbourger, et al. ∙

A method is proposed for constructing a spline curve of the Bezier type,...
O. Stelia, et al. ∙

Parametric curve and surface approximation of B-splines, corresponding to parameter estimated of data points depending on chord length, centripetal, or base curves and surfaces parameterizations, based on numerical optimization using newton type methods, and minimization of error in the least square sense, is well studied

[1, 2, 3, 4, 5]. Achieving of high accuracy in fitting to the constraints of the parameters, cause to increase the degree of the curve and surface. A high degree fit can lower the shape preserving and visually pleasing nature  [6, 7, 8, 9, 10, 11], and increases computational cost with the modelled curve and surface further in geometric design. In this context, we present algorithm for fitting a cubic b-spline curve to data points in three or higher dimensional space, with properties of continuity naturally upto C2

, and agrees with tangents at data points related to shape preserving and visually pleasing interpolation at projections in corresponding coordinate planes.

In this Section, we discuss basic concepts and terminologies, necessary in presenting our algorithm of B-spline curve fitting in Section 3.

Cardinal spline is a cubic hermit class of spline. Hermit interpolation uses cubic polynomials to interpolate consecutive data points in pairs. An equality of the tangent values, of the individual segments ending and starting at every intermediate data point is ensured. Thus, a piecewise cubic curve interpolating the data points, with C1

continuity at the junctions is obtained. A cardinal spline, defines equality of tangent values at every intermediate data point, by specifying, the tangent at every point. The tangent, at every intermediate data point, is specified to be equal to a constant multiple of the vector, using the next point as the end point, and the previous point as the start point for the corresponding vectors. Catmull-Rom spline

[11] is a specific cardinal spline that uses a fixed value of 0.5 for the constant.

Based on Equation 2, we have b(0)=P0, and b(1)=P3, or the control points at the beginning and end, are points on the curve. Further, the tangents at the end of the parameter values, or the first derivatives at respective values, that could be seen to be, are b′(0)=3(P1−P0), and b′(1)=3(P3−P2). A piecewise cubic curve of C1 continuity at the junctions, can be constructed using cubic bezier curve segments, by ensuring equality of the respective tangents, similar to that of cardinal splines. Thus, for any piecewise cubic curve, a bezier curve segment, with tuple of control points (Pj, Pj+1, Pj+2, Pj+3), to approximate a cardinal curve segment, from corresponding control point pk−1 to pk, requires Pj=pk−1, Pj+3=pk, Pj+1= Pj + τ3(pk+1 - pk−2), and Pj+2= Pj+3 - τ3(pk+1 - pk−1).

Turn angle for three consecutive data points in R2 is produced by the angle, by which line joining the first two points are to be rotated about the second point, from the straight line joining them, to reach to the third point. Turn angle θj, at jth vertex, is computed using the following expression:

The turn angle for point P2, is the exterior angle of P1P2P3 corresponding to the triangle P1P2P3.

2.7 Selection and Partition of Dominant Point

In order, to minimize the square error, due to m dominant points, we modify an initial guess, to reach to local minima. We use the following conditions in order of non-increasing priority for a good guess. We use associative array arr of turn angles and indices of all data points, sorted in descending order on turn angle.

In this Section, we present our algorithm, to fit cubic B-spline curve, to a chain of data points in three, or higher dimensional space, using terminologies discussed in Section 2. At first we present steps to construct cubic b-spline curves, to the data points in corresponding coordinate planes. Subsequently, we present steps to compute the control points and the curve in the higher dimensional space, from curves in the corresponding coordinate planes, using the merge rule that we have discussed before.

3.1 Algorithm for fitting curve to data points in a coordinate plane (FC2)

The steps in fitting a cubic b-spline curve to data points in a coordinate plane are as follows:

3.2 Algorithm for fitting curve to data points in the three dimensional space (FC3)

The steps in fitting a cubic b-spline curve to data points in the three dimensional space is as follows:

Park et. al.  [4] proposed DOM scheme, to improve accuracy and quality of B-spline curve fitting, for planar curves. The approach minimizes square error, by subset of points, named dominant points, selected on the curve, for parameterization. More points are selected from regions of higher curvature, to increase the information content, related to the shape of the curve. Chord length, and centripetal parameterization is used, for the points, indexed from an array of given points, in the fitting. Approach for fitting smooth B-spline curves/surfaces, to unordered/unstructured cloud of points, was proposed by Ma et. al.  [2]. Parameterization was considered with reference to point coordinates projected onto a base curve/surface, from the input space. Ravari et. al.  [5] minimized cost, of the least squares fit, based on a measure of fitness for the sample, corresponding to information reduced of salient points.

Yang et. al.  [14] proposed approach for fitting, an active B-spline curve/contour, to a target. The approach does not require parameterization, and inserts/deletes control points, and knots, to converge to the target curve. The approach improves speed of convergence, of square distance minimization (SDM) technique of Pottmann et. al.  [15]. Fast marching method  [16], is used on distance field computed among curves, from localized footpoint.

Juttler et. al.  [17] proposed approaches for implicit description of curves and surfaces, based on solution of simple constraints, and linear equations. The approach uses shape constraints, in contrast to explicit parameterization for surfaces at first. The approach emphasized computation based on sign generating real function, and considerations for simple algorithms using intersection with straight lines. Regions favoring simple computation are grown incrementally, based on processing of scanlines.

In this Section, we present results of experimentation using our algorithm for fitting cubic b-spline curve to data points in the three dimensional space. We also present results of experimentation using our algorithm for selection and partitioning of dominant points, for approximating the fitting of cubic b-spline curves to given data points in coordinate planes, based on minimization of square error. We implemented our algorithms in matlab, and have run our programs on Octave 4.0.2 installed on standard Windows 7 laptop PC. Certain data sets for our experimentation on approximating b-spline curve using dominant points, were followed from related work of Park et. al.  [4], and Ma et. al.  [2].

Results of fitting b-spline curves to data points on coordinate plane are shown in Figures 2 to 5. Each of the Figures contains Sub Figures a. to f. The Sub Figure a. in the Figures, show interpolation of the data points using a shape preserving, and visually pleasing, manner using cubic cardinal spline curve that preserves C1 (or, tangent) continuity at junctions among consecutive segments, corresponding to the first step in FC2 algorithm. Piecewise cubic bezier curve, computed using control points for each piece, with end points and tangents, respective to the segments of cardinal spline, is shown in Sub Figure b, corresponding to the second step in FC2. Curvature continuous b-spline curve, using control points corresponding to the piecewise bezier curve in Sub Figure b., and based on the third step in FC2, is shown in Sub Figure c. Based on our algorithm presented in Section 2, approximating b-spline constructed using dominant points represented by fraction of the given points, in decreasing order of the fractions, and with corresponding least square errors, are shown in Sub Figures d., e., and f. The observations showed that, the least square error increase in exponents, with increased rate in lowering of the dominant points. Based on our experiments, 70% of the points were observed to be dominant, for shapes given with dense data points, as in Figures 4, and 5.

We have presented an approach for fitting B-spline curves to data points in three dimensional space. The present solution can approximate data points with cubic b-spline curves within a given bound of error in the least square sense. The data point that is next to a present is required to be explicit at input. This fact of the input is used for a shape preserving and visually pleasing interpolation, free from wiggles, as a prerequisite in the present scheme. Fitting to unordered data, based on assumptions on parameters implicitly, with any knowledge on its natural evolution, is not possible in our approach at present, and is a shortcoming. The solution presented though basic, can be both refined for increased continuity or quality of fit, and extended to higher dimensions, based on modifications to knot vectors and merging of control points from dependent lower dimension spaces, respectively. Our work on dominant points is inline with present work on b-splines to fit higher dimensional data. The approach presented for curves, automatically extends to representations for surfaces that may be of bi-parametric and ruled.