In this article we present a one-field monolithic finite element method in the Arbitrary Lagrangian-Eulerian (ALE) formulation for Fluid-Structure Interaction (FSI) problems. The method only solves for one velocity field in the whole FSI domain, and it solves in a monolithic manner so that the fluid solid interface conditions are satisfied automatically. We prove that the proposed scheme is unconditionally stable, through energy analysis, by utilising a conservative formulation and an exact quadrature rule. We implement the algorithm using both F-scheme and d-scheme, and demonstrate that the former has the same formulation in two and three dimensions. Finally several numerical examples are presented to validate this methodology, including combination with remesh techniques to handle the case of very large solid displacement. 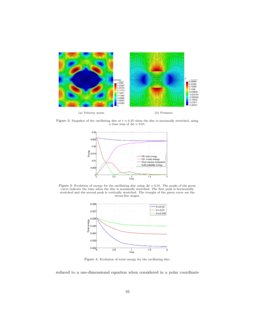 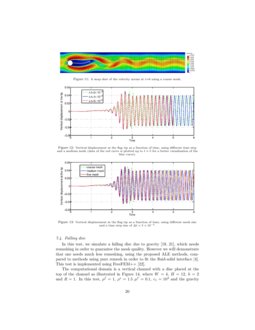 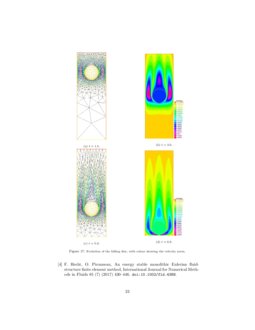 Fluid-structure interaction simulations with a LES filtering approach in solids4Foam

We consider the interaction of an incompressible fluid described by a Le...
Michele Girfoglio, et al. ∙

Numerical methods for Fluid-Structure Interaction (FSI) have been widely studied during the past decades, and a variety of methodologies have been developed in order to address different aspects of the FSI problem. However stability analyses of the existing numerical methods are rare especially when large solid deformation is involved. This paper is dedicated to establishing a robust stability analysis of a one-field monolithic FSI scheme in the Arbitrary Lagrangian-Eulerian (ALE) framework.

Monolithic methods have been regarded as the most robust FSI algorithms in the literature (Heil_2004; Heil_2008; Muddle_2012; Hecht_2017; Wang_2017; Wang_2019; hubner2004monolithic), which solve for the fluid and solid variables simultaneously in one equation system. Among these methodologies for FSI problems, the one-field approaches (Hecht_2017; Wang_2017) express the solid equation in terms of velocity, thus only solve for one velocity in the whole FSI domain. In this case the whole system can be solved similarly to a modified fluid problem, and the coupling conditions at fluid and solid interface are automatically satisfied.

The stability analysis when using the ALE framework is challenging, even for the pure fluid problem, due to the arbitrary moving frame (nobile1999stability; formaggia2004stability; bonito2013time). (Boffi_2016; Boffi_2015) present an energy stable Fictitious Domain Method with Distributed Lagrangian Multiplier (FDM/DLM), and (Hecht_2017; Pironneau_2016) present an energy stable Eulerian formulation by remeshing. In a previous study (Wang_2019) we analysed the energy stability for a one-field FDM method. In this article we extend this one-field idea to the ALE formulation, and the stability result is achieved by expressing the fluid and solid equations in a conservative formulation. In this sense, the formulation is similar to the one introduced in (Hecht_2017). However it differs from (Hecht_2017) in the following perspectives: (1) we formulate the solid in the reference domain and analyse in an ALE frame of reference, in which case the formulation and analysis are exactly the same for two and three dimensional cases, whereas (Hecht_2017) formulates and analyses everything in the current domain, for which the three dimensional case is significantly more complicated (chiang2017numerical)

; (2) we update the solid deformation tensor (the

F-scheme) while (Hecht_2017) updates the solid displacement (the d-scheme); (3) we implement the scheme by solving an additional solid-like equation at each time step in order to move the mesh, whilst (Hecht_2017) implements their scheme by remeshing which is expensive in the three dimensional case.

The paper is organized as follows. In Section 2 the control equations for the FSI problem are introduced in an ALE framework. In Section 3 the finite element weak formulation is introduced, followed by spatial and time discretisations in Section 4. The main results of energy stability are presented in Section 5. Implementation details are considered in Section 6 and numerical examples are given in Section 7, with some conclusions in Section 8.

2 The arbitrary Lagrangian-Eulerian description for the FSI problem

Let Ωft⊂Rd and Ωst⊂Rd be the fluid and solid domain respectively (which are time dependent regions), Γt=¯¯¯¯Ωft∩¯¯¯¯Ωst is the moving interface between the fluid and solid, and Ωt=¯¯¯¯Ωft∪¯¯¯¯Ωst has an outer boundary ∂Ωt, which can be fixed or moving as shown in Figure 1. The Eulerian description is convenient when we observe a fluid from a fixed frame, while the Lagrangian description is convenient when we observe a solid from a frame moving with it. An ALE frame of reference can be adopted when a fluid and solid share an interface and interact with each other as shown in Figure 1, in which case the frame moves arbitrarily from a reference configuration Ωt0, chosen to be the same as the initial configuration at t0, to a current configuration Ωt. Let us define a family of mappings At:

We call x∈Ωt the Eulerian coordinate, and call its inverse image ^x, via the above mapping A−1t, the ALE coordinate. We assume that A(^x,t) is differentiable with respect to t for all ^x∈Ωt0, and define the velocity of the ALE frame as

Given an Eulerian coordinate x∈Ωt, its corresponding ALE coordinate ^x1∈Ωt0 should be distinguished from its material (or Lagrangian) coordinate ^x2∈Ωt0 as shown in Figure 1. In fact ^x2∈Ωt0 (not necessarily the same as ^x1) maps to x∈Ωt via the Lagrangian mapping, i.e., the trajectory of a material particle at ^x2:

Although the Lagrangian configuration and the ALE configuration are not generally the same, both are chosen to have the initial configuration Ωt0 in this article. We shall also construct the ALE mapping such that At(Ωt0) coincides with Ft(Ωt0) at all boundaries including the fluid-solid interface: At(∂Ωt0)=Ft(∂Ωt0) and At(∂Γt0)=Ft(∂Γt0).

The ALE mapping is the mapping that is actually used to move the domain in this article, and the purpose of introducing the Lagrangian mapping is to discuss its related variables, such as particle velocity u and solid deformation tensor F, which will be defined in the following context.

Formulated in the current configuration, the conservation of momentum takes the same form in the fluid and solid:

with ρ, g, u and σ being the density, gravity acceleration, velocity and Cauchy stress tensor respectively. Here we use the notation ρ={ρfinΩftρsinΩst, with the superscript f and s denote fluid and solid respectively, and similar notations are also applied to u and σ. In the above, d(⋅)dt is the total derivative computed along the trajectory of a material particle at x, i.e. via the Lagrangian mapping:

Replacing the above partial time derivative by the total derivative of

leads to the ALE formulation of (7)

with τ being the deviatoric part of the stress tensor. For a Newtonian fluid in Ωft,

being the deformation tensor of the solid, JFt being the determinant of F, and Ψ(F) being the energy function of the hyperelastic solid material. Combining with the continuity equation

the FSI system is completed with continuity of the velocity and normal stress conditions on the interface Γt:

and (for simplicity of this exposition) homogeneous Dirichlet and Neumann boundaries on ΓD and ΓN respectively:

with ΓD∪ΓN=∂Ωt as shown in Figure 1.

According to equation (2) we construct Ωt from Ωt0, so a function v∈H10(Ωt) is one-to-one corresponding to a function ^v∈H10(Ωt0) via

Choosing a test function , the weak formulation may be obtained by multiplying v on both sides of equation (10), and integrating the stress term by parts in domain Ωft and Ωst separately:

We used ∂Ψ∂FFT:∇v=∂Ψ∂F:∇vF=∂Ψ∂F:∇^xv in the above deduction. Using the boundary conditions (16) and (17), we have the following equation by adding up (19) and (20).

with A=∂A(^x,t)∂^x=∇^xAt. Then we can take the time derivative outside the moving domain (conservative formulation (nobile1999stability)),

with Γt0 and ∂Ωt0 being the initial interface and outer boundary respectively, as shown in Figure 1, and Ft being the Lagrangian mapping as defined in (5).

4 Discretisation in space and time

with Nu and Np being the number of nodal variables for each velocity component and pressure respectively. Then

Using the backward Euler scheme, equation (25) and (26) can be discretised respectively as follows:

and δtI(ξ) is a quadrature formula used to compute ∫tn+1tnξ(t). In order to have an unconditionally stable scheme, which will be proved in Section 5, the mid-point integration is adopted for

Due to the definition of the deformation tensor F (14) and ALE velocity w (4), we have

Up to now we have not stated how to construct w (or At), because very often we only need to construct the ALE mapping At at a discrete time level, that is to say computing Atn+1 for n=0,1,… at each time step. This will be explained in the rest of this section.

We solve the following static linear elastic equation in Ωtn+1 in order to compute wn+1, and take w(t)=wn+1 for t∈(tn,tn+1]. Given the following boundary data:

with μ and λ being the Lam´e constants used here as pseudo-solid parameters. It is well known that the above elliptic problem (37) to (39) has a unique solution w∈Vh(Ωtn+1) (brenner2007mathematical). As a result, we are able to construct a mapping for t∈(tn,tn+1],

From the computational point of view, knowing the ALE velocity wn+1 at the discrete level is sufficient.

Putting all the above together, the discrete ALE-FSI problem reads:

Problem 2 is a highly non-linear system, so we solve it iteratively as described in the following Algorithm 1.

We shall deduce an energy stability result at the end of this section. In preparation for this we first prove the following lemmas.

If (u,p,w) is the solution of Problem 2, then u satisfies the following at t=tn+1.

and integrating by parts:

Integrating by parts we get

The boundary integral in (47) is zero due to the enclosed flow u⋅n=0 condition (17). The second term on the right-hand side of (47) can be expressed as:

where CAtn,t is the cofactor matrix of ∂Atn,t∂x. According to the way we construct Atn,t (40), we know CAtn,t is a polynomial in time of degree d−1 (nobile1999stability), with d=2,3 being the space dimension. Also w(t)=wn+1 is a constant for t∈(tn,tn+1], so η(t) is linear in time when d=2 and quadratic when d=3, and a mid-point integration (d=2) or Simpson formula (d=3) would exactly compute ∫tn+1tnη(t). This is to say

Define potential energy of the solid:

Due to the convexity assumption of Ψ(F), we have