Nonlocal models provide accurate representations of physical phenomena ranging from fracture mechanics to complex subsurface flows, where traditional partial differential equations fail to capture effects caused by long-range forces at the microscale and mesoscale. However, the application of nonlocal models to problems involving interfaces such as multimaterial simulations and fluid-structure interaction, is hampered by the lack of a rigorous nonlocal interface theory needed to support numerical developments. In this paper, we use an energy-based approach to develop a mathematically rigorous nonlocal interface theory which provides a physically consistent extension of the classical perfect interface PDE formulation. Numerical examples validate the proposed framework and demonstrate the scope of our theory. 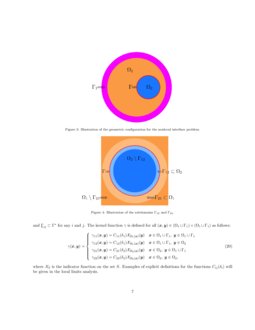 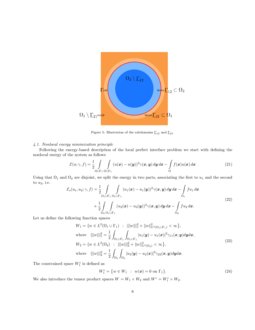 We present a novel formulation based on an immersed coupling of Isogeome...
Masoud Behzadinasab, et al. ∙

How do degenerate mobilities determine singularity formation in Cahn-Hilliard equations?

Nonlocal models can accurately describe physical phenomena arising from long-range forces at the microscale and mesoscale. Such phenomena cannot be accounted for by partial differential equations (PDEs) where interaction is limited to points that are in direct contact with each other. As a result, mathematically nonlocal models are represented by integral operators, which are better suited to capture interactions occurring across a distance.

Although research on nonlocal models has recently intensified, there is still a lack of a mathematically rigorous and physically consistent nonlocal interface (NLI) theory. Examples of NLI research are few and far between in the literature with alali2015peridynamics ; seleson2013interface being perhaps the only published work in this field. However, the NLI formulations in these papers do not provide a rigorous theoretical framework because they do not address existence and uniqueness of solutions to NLI problems, nor do they establish formal convergence to local limits.

The absence of such a framework has hampered the wider adoption of nonlocal models in applications that require proper handling of material interfaces, such as multi-material simulations, fluid-structure interaction, and contact, to name a few. The main goal of this work is to fill this theoretical gap by providing a rigorous NLI theory that would establish a much needed foundation for the further development and application of nonlocal models in science and engineering applications.

Nonlocal interface problems are challenging for a number of reasons rooted in the need to treat a local physical interface arising from material discontinuities in nonlocal terms. In particular, one of the key technical challenges is to discover appropriate nonlocal transmission conditions capable of providing physically consistent well-posed NLI problems that converge to classical formulations as the characteristic parameter of the nonlocal model goes to zero.

Our strategy is motivated by an energy-based description of classical local interface problems in which the local energy of the coupled system is minimized subject to constraints modeling the physics of the local interface. Here we follow this template to obtain mathematically rigorous NLI formulations by minimizing the nonlocal energy of the system subject to constraints describing the physics of the nonlocal interface. In so doing, we obtain nonlocal transmission conditions and well-posed NLI problems that converge to their local counterparts at the local limit.

The resulting mathematical NLI framework is validated through numerical experiments that confirm the theoretical predictions, provide additional insights on the NLI model and suggest follow-up research directions that will be pursued in forthcoming work.

In this section, we review a classical energy-based formulation of local interface problems for second-order elliptic PDEs. Let Ω1 and Ω2 be two disjoint open and bounded subsets of Rn, n=1,2,3, with boundaries ∂Ω1 and ∂Ω2, respectively, and such that ∂Ω1∩∂Ω2=∂Ω2.

where the functions κ1 and κ2 represent the different material properties of the two domains and are assumed to be positive and bounded from below. The functions f1, f2 are known.

We obtain a particular instance of a local interface problem by choosing a specific constrained minimization setting for (1). To this end, let us define the following energy spaces, for i=1,2

Note that, due to the configuration of the domains depicted in Figure 1, Wc2=W2

. Tensor product spaces are then defined as

The second constraint in (3), i.e., the continuity of the states across the interface, is a modeling assumption about the physics of the interface, which gives rise to a specific flavor of a local interface problem. This constraint is a particular case of a general coupling condition given by u1(x)−β(x)u2(x)=μ(x), where β and μ are some given functions. To avoid unnecessary technical details that are not essential for our purposes we do not consider this more general type of interface conditions in this paper.

The Euler-Lagrange equation corresponding to the Minimization Principle 2.1 is given by the following weak variational equation: find (u1,u2)∈W satisfying the constraints in (3) and such that

As usual, we derive the strong form of the interface problem from the weak formulation (4) by assuming that u1 and u2 are sufficiently regular. Collecting terms, integrating by parts, and taking into account that v1∈Wc yields

Using that v1=v2 on Γ we then recover from this equation the flux continuity condition κ1(x)∇u1(x)⋅n1+κ2(x)∇u2(x)⋅n2=0. Thus, the strong (PDE) form of the local interface problem corresponding to the Minimization Principle (2.1) is given by

We note that the strong form of the interface problem contains the flux continuity condition (10) that was not explicitly present in Minimization Principle 1. This condition is a consequence of (9) that, as already mentioned, is a modeling assumption about the physics of the interface. Interfaces for which both the jumps in the state and in the normal flux are zero across the interface are known as perfect interfaces Javili_14_CMAME . In contrast, interfaces for which one or both of these quantities are discontinuous across the interface are known as imperfect; see, e.g. Javili_14_CMAME .

In this section, we review the fundamentals of nonlocal volume constrained problems. Let Ω be an open and bounded subset of Rn. Given a positive real number δ, we define the interaction domain ˜Γ associated with Ω as follows

Note that ˜Γ depends on δ, even though it is not written explicitly. Figure 2 shows an example of a two-dimensional domain and its interaction region.

In this work we use an energy-based characterization of nonlocal volume constrained problems which mirrors the Dirichlet principle for the gradient operator. Specifically, we seek the states of the nonlocal model as suitably constrained minimizers of the following nonlocal energy functional:

We refer to the constraint in the Minimization Principle 3.1 as a Dirichlet volume constraint because it generalizes the standard (local) Dirichlet boundary condition.

The necessary optimality condition of the Minimization Principle 3.1 is given by the following variational equation: find u∈W such that u(x)=g(x) on ˜Γ and

and the nonlocal Green’s identity Du_13_MMMAS

We retain the domain configuration from Section 2, i.e., Ω1 and Ω2 are disjoint bounded subsets of Rn such that ∂Ω1∩∂Ω2=∂Ω2, and Ω=Ω1∪Ω2. In the nonlocal interface problem, the domains Ωi interact with each other through regions that have nonzero measure. These regions are defined in different ways depending on the relative location of x and y and on two parameters δ1 and δ2. Specifically, for δ1>0 and δ2>0, we introduce:

Figures 3, 4, and 5 illustrate the geometric configuration for the nonlocal interface problem and the various subdomains involved.

We also introduce the set Γ∗=Γij∪Γ––ji if δi≥δj. Note that by definition Γij⊂Γ∗ and Γ––ij⊂Γ∗ for any i and j. The kernel function γ is defined for all (x,y)∈(Ω1∪Γ1)×(Ω1∪Γ1) as follows:

where XS is the indicator function on the set S. Examples of explicit definitions for the functions Cij(δi) will be given in the local limits analysis.

Using that Ω1 and Ω2 are disjoint, we split the energy in two parts, associating the first to u1 and the second to u2, i.e.

The constrained space Wc1 is defined as

We also introduce the tensor product spaces W=W1×W2 and Wc=Wc1×W2.

The Euler-Lagrange equation corresponding to the Minimization Principle 4.1 is given by the following weak variational equation: find (u1,u2)∈W satisfying the constraints in (25) and such that

The strong form of the nonlocal interface problem can be obtained from the weak form as follows. We begin by denoting the double integral terms in (26) by A, B, C, D and E, respectively, so that the weak equation assumes the form

To transform these terms we will use the following identity

For the last term in equation (27), labeled D, we proceed as for B to get:

To obtain the strong form of the nonlocal interface problem, we now collect all contributions from A, B, C and D and exploit the fact that v1 and v2 are independent of each other and arbitrary in Ω1 and Ω2. The resulting nonlocal subdomain problems are given by

respectively. Next, we isolate terms in (33) and (34) that do not interact with Ω2 and Ω1 respectively. After substituting (20), we obtain the following two equations: