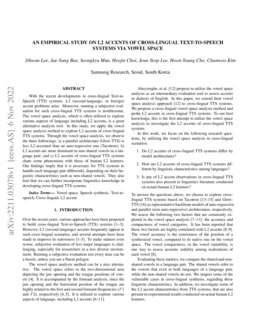 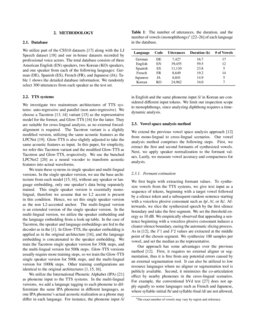 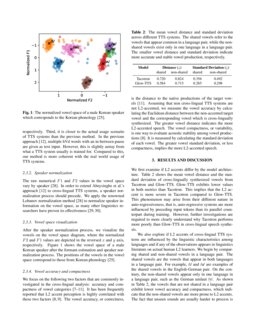 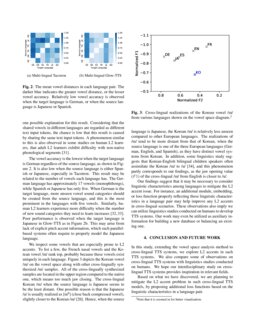 The problem of short text matching is formulated as follows: given a pai...
Asmelash Teka Hadgu, et al. ∙

We describe the design, the evaluation setup, and the results of the 201...
Liane Guillou, et al. ∙

Deep Feelings: A Massive Cross-Lingual Study on the Relation between Emotions and Virality

Over the recent years, various approaches have been proposed to build cross-lingual Text-to-Speech (TTS) systems [34, 23, 33]. However, L2 (second-language) accents frequently appear in such cross-lingual scenarios, and several attempts have been made to improve its nativeness [34, 23, 33]. To make matters even worse, subjective evaluation of less major languages is challenging, especially for researchers in a less diverse environment. Running a subjective evaluation test every time can be a hassle, unless you are a fluent polygot.

The vowel space analysis method can be a nice alternative. The vowel space refers to the two-dimensional area depicting the jaw opening and the tongue positions of vowels [10]. It is accompanied by the formant analysis, since the jaw opening and the horizontal position of the tongue are highly related to the first and second formant frequencies (F1 and F2), respectively [10, 27]. It is utilized to explore various aspects of language, including L2 accents [7, 16, 17, 14, 24, 6].

In this work, we focus on the following research questions, by utilizing the vowel space analysis in cross-lingual scenarios:

To answer the questions above, we choose to explore cross-lingual TTS systems based on Tacotron [31, 28, 8] and Glow-TTS [18] as representative backbone models of auto-regressive and parallel (non auto-regressive) architectures, respectively. We assess the following two factors that are commonly explored in the vowel space analysis [16, 17, 14, 24, 6]: the accuracy and compactness of vowel categories. It has been reported that these two factors are highly correlated with L2 accents [14, 17]. The vowel accuracy is the correctness of the position of a synthesized vowel, compared to its native one on the vowel space. The vowel compactness, or the vowel variability, is one way to assess acoustic stability among realizations of each vowel [17].

Evaluating these metrics, we compare the shared and non-shared vowels in a language pair. The shared vowels refer to the vowels that exist in both languages of a language pair, while the non-shared vowels do not. We inspect some of the vulnerable cases in cross-lingual synthesis, regarding these linguistic characteristics. In addition, we investigate some of the L2 accent characteristics from TTS systems, that are also present in experimental results conducted on actual human L2 learners.

We utilize part of the CSS10 datasets [25] along with the LJ Speech dataset [15] and our in-house datasets recorded by professional voice actors. The total database consists of three American English (EN) speakers, two Korean (KO) speakers, and one speaker from each of the following languages: German (DE), Spanish (ES), French (FR), and Japanese (JA). Table 2 shows the detailed database information. We randomly select 300 utterances from each speaker as the test set.

We investigate two mainstream architectures of TTS systems: auto-regressive and parallel (non auto-regressive). We choose a Tacotron [31, 28] variant [8] as the representative model for the former, and Glow-TTS [18] for the latter. They are suitable for cross-lingual analysis, as no external forced-alignment is required. The Tacotron variant is a slightly modified version, utilizing the same acoustic features as the LPCNet [29]. Glow-TTS is also slightly adjusted to take the same acoustic features as input. In this paper, for simplicity, we refer this Tacotron variant and the modified Glow-TTS as Tacotron and Glow-TTS, respectively. We use the bunched LPCNet2 [26] as a neural vocoder to transform acoustic features into actual waveforms.

We utilize the International Phonetic Alphabet (IPA) [3] as phoneme input to the TTS systems. In the multi-lingual versions, we add a language tagging to each phoneme to differentiate the same IPA phoneme in different languages, as one IPA phoneme’s actual acoustic realization as a phone may differ in each language. For instance, the phoneme input /i/ in English and the same phoneme input /i/ in Korean are considered different input tokens. We limit our inspection scope to monophthongs, since analyzing diphthong requires a time-dynamic analysis.

We extend the previous vowel space analysis approach [1] from mono-lingual to cross-lingual scenarios. Our vowel analysis method comprises the following steps. First, we extract the first and second formants of synthesized vowels. Next, we apply speaker normalization to the formant values. Lastly, we measure vowel accuracy and compactness for analysis.

We first begin with extracting formant values. To synthesize vowels from the TTS systems, we give text input as a sequence of tokens, beginning with a target vowel followed by a silence token and a subsequent random sentence starting with a voiceless plosive consonant such as /p/, /t/, or /k/. Afterwards, we slice the synthesized speech by the first silence boundary and take the first segment. We set the threshold energy as 10 dB. We empirically observed that appending a sentence beginning with a voiceless plosive consonant induces a clearer silence boundary, easing the automatic slicing process. As in [1], the F1 and F2 values are extracted at the middle point of the chosen segment. We synthesize 100 samples per vowel, and set the median as the representative.

Our approach has some advantages over the previous method [1]. First, it requires no external aligner or segmentation, thus it is free from any potential errors caused by an external segmentation tool. It can also be utilized to low resource languages where no aligner or segmentation tool is publicly available. Second, it minimizes the co-articulation effect by nearby phonemes in the cross-lingual scenarios. For example, the conventional hVd test [13] does not apply equally to some languages such as French and Japanese, where syllable-initial /h/ and syllable-final /d/ are not allowed, respectively. Third, it is closer to the actual usage scenario of TTS systems than the previous method. In the previous approach [1], multiple hVd words with an in-between pause are given as text input. However, this is slightly astray from what a TTS system usually is trained for. Compared to this, our method is more coherent with the real world usage of TTS systems.

The raw numerical F1 and F2 values in the vowel space vary by speaker [22]. In order to extend Abeysinghe et al.’s approach [1] to cross-lingual TTS systems, a speaker normalization process should precede. We apply the renowned Lobanov normalization method [22] to normalize speaker information on the vowel space, as many other linguistics researchers have proven its effectiveness [2, 9].

After the speaker normalization process, we visualize the vowels on the vowel space diagram, where the normalized F2 and F1 values are depicted in the reversed x and y axis, respectively. Figure 1

shows the vowel space of a male Korean speaker after the formant estimation and speaker normalization process. The positions of the vowels in the vowel space correspond to those from Korean phonology

We focus on the following two factors that are commonly investigated in the cross-lingual analysis: accuracy and compactness of vowel categories [16, 17, 14, 24, 6]. It has been frequently reported that L2 accent perception is highly correlated with these two factors [14, 17]. The vowel accuracy, or correctness, is the distance to the native productions of the target vowels [6]. Assuming that non cross-lingual TTS systems are not L2-accented, we measure the vowel accuracy by calculating the Euclidean distance between the non-accented target vowel and the corresponding vowel which is cross-lingually synthesized. The greater vowel distance indicates the more L2-accented speech. The vowel compactness, or variability, is one way to evaluate acoustic stability among vowel productions [17]

We first examine if L2 accents differ by the model architecture. Table 2 shows the mean vowel distance and the standard deviation of cross-lingually synthesized vowels from Tacotron and Glow-TTS. Glow-TTS exhibits lower values in both metrics than Tacotron. This implies that the L2 accent is more severe in Tacotron compared to Glow-TTS. This phenomenon may arise from their different nature in auto-regressiveness, that is, auto-regressive systems are more influenced by preceding input tokens than its parallel counterpart during training. However, further investigations are required to more clearly understand why Tacotron performs more poorly than Glow-TTS in cross-lingual speech synthesis.

The vowel accuracy is the lowest when the target language is German regardless of the source language, as shown in Figure 2. It is also low when the source language is either Spanish or Japanese, especially in Tacotron. This result may be related to the number of vowels each language has. The German language has approximately 17 vowels (monophthongs), while Spanish or Japanese has only five. When German is the target language, more unseen vowel sound categories should be created from the source language, and this is the most prominent in the languages with five vowels. Similarly, human L2 learners experience more difficulty when the number of new sound categories they need to learn increases [12, 32]. Poor performance is observed when the target language is Japanese in Glow-TTS as in Figure 1(b). This may arise from lack of explicit pitch accent information, which such parallel-based systems often require to properly model the Japanese language.

We inspect some vowels that are especially prone to L2 accents. To list a few, the French nasal vowels and the Korean vowel /W/ rank top, probably because these vowels exist uniquely in each language. Figure

3 depicts the Korean vowel /W/ on the vowel space along with other cross-lingually synthesized /W/ samples. All of the cross-lingually synthesized samples are located in the upper region compared to the native one, which means too much jaw closing. The cross-lingual Korean /W/ when the source language is Japanese seems to be the least distant. One possible reason is that the Japanese /u/ is usually realized as [WB] (close back compressed vowel), slightly closer to the Korean /W/ [30]. Hence, when the source language is Japanese, the Korean /W/ is relatively less unseen compared to other European languages. The realizations of /W/ tend to be more distant from that of Korean, when the source language is one of the three European languages (German, English, and Spanish), as they have distinct vowel systems from Korean. In addition, some linguistics study suggests that Korean-English bilingual children speakers often assimilate the Korean /W/ to /u/ [4], and this phenomenon partly corresponds to our findings, as the jaw opening value (F1) of the cross-lingual /W/ from English is closer to /u/.

Our findings suggest that it may be necessary to consider linguistic characteristics among languages to mitigate the L2 accent issue. For instance, an additional module, embedding, or loss function properly reflecting these linguistic characteristics in a language pair may help improve any L2 accents in cross-lingual scenarios. These observations also imply we can utilize linguistics studies conducted on humans to develop TTS systems. Our work may even be utilized as auxiliary information for building a new database or balancing an existing one.

Based on what we have discovered, we are planning to mitigate the L2 accent problem in such cross-lingual TTS models, by proposing additional loss functions based on the linguistic characteristics in a language pair.