An Empirical Study on Hyperparameters and their Interdependence for RL Generalization

Recent results in Reinforcement Learning (RL) have shown that agents with limited training environments are susceptible to a large amount of overfitting across many domains. A key challenge for RL generalization is to quantitatively explain the effects of changing parameters on testing performance. Such parameters include architecture, regularization, and RL-dependent variables such as discount factor and action stochasticity. We provide empirical results that show complex and interdependent relationships between hyperparameters and generalization. We further show that several empirical metrics such as gradient cosine similarity and trajectory-dependent metrics serve to provide intuition towards these results. 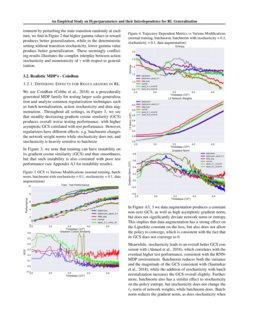 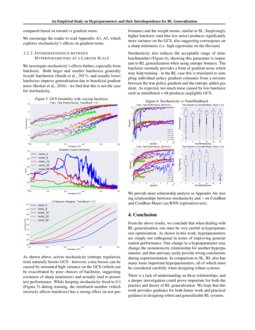 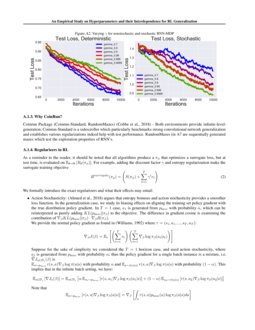 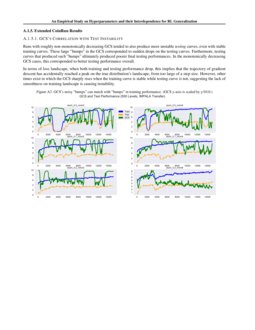 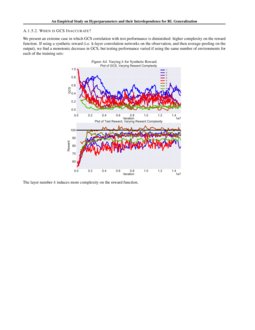 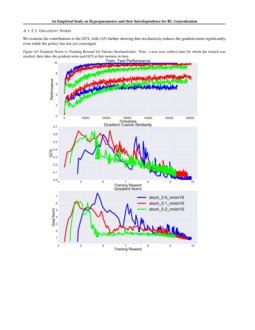 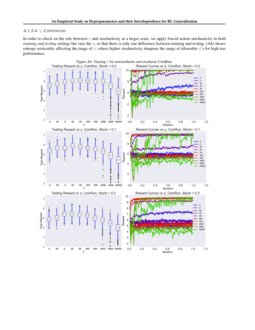 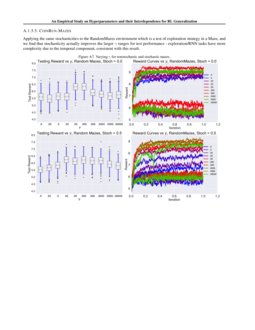 One framework used to study RL generalization is to treat it analogous to a classical supervised learning problem - i.e. train jointly on a finite ”training set”, and check performance on the ”test set” as an approximation to the population distribution. Normally, statistical learning theory only provides measurements of generalization performance

, based on a probabilistic bounding approach using the complexity of the classifier.

This however, ignores many trajectory dependent factors. Many different RL-specific parameters may affect RL performance during training, including γ

- the discount factor, action stochasticity, and other network modifications such as Batch Normalization.

Trajectory Dependent methods of analysis thus are still important (which include direction of gradient, Gradient Lipschitz smoothness, and optimization landscapes), and seek to understand training behavior during gradient descent.

However, one large caveat in RL is simply the inherent noisiness in evaluating the objective function, which can easily make landscape visualization such as Li et al. (2018); Ilyas et al. (2018), intractible and expensive for larger scale datasets, such as CoinRun Cobbe et al. (2018). Instead, we must infer properties about the loss landscape and training from observing summary metrics. The main metric we will use is the gradient cosine similarity between training and testing sets during training.

We provide separate experimental results measuring parts of the policy gradient optimization process, to show that

To formalize our supervised learning analogy to the RL setup, let Θ be a distribution over parameters θ that parametrize an MDP family {Mθ:θ∈Θ}. Each θ parametrizes some state space, action space, reward, transitions, and observation function, with Mθ=(Sθ,Aθ,rθ,Tθ,S0,θ,wθ). An appropriate train and test set can then be created by randomly sampling θ∼Θ and training or evaluating on Mθ.

For sake of notational simplicity, we denote s as the observation rather than wθ. The standard policy gradient Williams (1992) without a discount factor where τ=(s1,a1,...,sT,aT) is the gradient with respect to the true objective:

More recent RL algorithm such as PPO Schulman et al. (2017) optimize a surrogate objective RPPO(β)=LCLIP(ϕ)−c1LVF(ϕ)+c2S(πϕ), where LCLIP is the clipped advantage ratio, LVF is the value function error, and S is entropy.

These surrogate losses inherently affect our definition of the ”gradient cosine similarity” (GCS) between training and test gradients and what the GCS measures. With basic policy gradient this is simply the normalized dot product between ∇ϕRtrain(πϕ) and ∇ϕRtest(πϕ) which is unbiased, but with algorithms such as PPO, the GCS becomes biased. On datasets that practically require PPO, we minimize its subtle effects on the GCS by using the same algorithm hyper-parameters for training and testing.

We briefly explain some metrics and what they measure:

Henderson et al. (2018); Ilyas et al. (2018) establish deep RL experimentation is inherently noisy, and joint training only increases the variance of the policy gradient is increased further from sampling from different environments. The raw versions of ALE and Mujoco environments do not strongly follow distributional sampling of levels. We instead use both synthetic (RNN-MDP) and real (CoinRun) datasets, with policy gradient PPO as the default algorithm due to its reliability (hyperparameters in Appendix, A.2.2).

To simulate non-linear dynamics for generalization, we fix an RNN to simulate T. The RNN’s (input, hidden state, output) correspond to the (action of a policy, underlying MDP state, observations w) with scalar rewards obtained through a nonlinear map of w. The initial state will start from s0(θ). Thus the the parameter θ will only be a seed to generate initial state. This setting is done in order to use a constant transition function, to guarantee that there always exists an optimal action for any state regardless of θ. By allowing control over state transitions, we may study the effects of stochasticity in the environment, by adding Gaussian noise into the hidden state at each time, i.e. sactualt=srawt+ϵN(0,1). We compute gradients through the environment during joint training to improve training performance.

(See Appendix A1 and A2 for enlarged graphs).

In Figure 1, we find adding stochasticity (e.g. random action stochasticity or sticky actions Zhang et al. (2018)) into actions increases GCS and decreases test loss. This result is isolated from any other factors in RL, and thus shows that stochasticity aligns the policy gradient more to the true gradient. Since entropy and stochasticity may smoothen the loss landscape in RL Ahmed et al. (2018), this suggests that entropy may be also therefore be affecting the direction of the gradient in particular ways impacting generalization.

3.2.1 Differing Effects for Regularizers in RL

We use CoinRun Cobbe et al. (2018) as a procedurally generated MDP family for testing larger scale generalization and analyze common regularization techniques such as batch normalization, action stochasticity and data augmentation. Throughout all settings, in Figure 3, we see that steadily decreasing gradient cosine similarity (GCS) produces overall worse testing performance, with higher asymptotic GCS correlated with test performance. However, regularizers have different effects: e.g. batchnorm changes the network weight norms while stochasticity does not, and stochasticity is heavily sensitive to batchsize.

In Figure 3, we note that training can have instability on its gradient cosine similarity (GCS) and thus smoothness, but that such instability is also correated with poor test performance (see Appendix A3 for instability results).

In Figure A3, 3 we data augmentation produces a constant non-zero GCS, as well as high asymptotic gradient norm, but does not significantly deviate network norm or entropy. This implies that data augmentation has a strong effect on the Lipschitz constant on the loss, but also does not allow the policy to converge, which is consistent with the fact that its GCS does not converge to 0.

We encourage the reader to read Appendix A3, A5, which explores stochasticity’s effects on gradient norm.

3.2.2 Interdependence between Hyperparameters at a Larger Scale

We investigate stochasticity’s effects further, especially from batchsize. Both larger and smaller batchsizes generally benefit batchnorm Smith et al. (2017), and usually lower batchsizes improve generalization due to beneficial gradient noise Keskar et al. (2016) - we find that this is not the case for stochasticity.

As shown above, action stochasticity (entropy regularization) naturally boosts GCS - however, extra boosts can be caused by unwanted high variance on the GCS (which can be exacerbated by poor choices of batchsize, suggesting existence of sharp minimizer) and actually lead to poorer test performance. While keeping stochasticity fixed to 0.1 (Figure 5

) during training, the minibatch number (which inversely affects batchsize) has a strong effect on test performance and the weight norms, similar to SL. Surprisingly, higher batchsize (and thus less noise) produces significantly more variance on the GCS, also suggesting convergence on a sharp minimizer (i.e. high eigenvalue on the Hessian).

Stochasticity also reduces the acceptable range of mini-batchnumber (Figure 6), showing this parameter is important to RL generalization when using entropy bonuses. The batchsize normally provides a form of gradient noise which may help training - in the RL case this is translated to sampling individual policy gradient estimates from a mixture between the true policy gradient and the entropy added gradient. As expected, too much noise caused by low batchsize such as nminibatch = 64 produces negligible GCS.

We provide more relationship analysis in Appendix A6, testing relationships between stochasticity and γ on CoinRun and CoinRun-Mazes (an RNN exploration test).

From the above results, we conclude that when dealing with RL generalization, one must be very careful in hyperparameter optimization. As shown in this work, hyperparameters are simply not orthogonal in terms of improving generalization performance. One change in a hyperparameter may change the monotonicity relationship for another hyperparameter, and thus and may easily provide wrong conclusions during experimentation. In comparison to SL, RL also has many more important hyperparameters, all of which must be considered carefully when designing robust systems.

There is a lack of understanding on these relationships, and a deeper investigation could prove important for both the practice and theory of RL-generalization. We hope that this work provides guidance for both future work and practical guidance in designing robust and generalizable RL systems.

For the sake of simplicity, assume our observation was the identity function (i.e. we observe the state). Note that the ”state” within an MDP is subjective, depending on certain modifications, and this can dramatically affect solvability. For instance, an agent whose observation only consists of single timestep states is unable to adapt to different transition functions in different MDP’s. This can occur in Mujoco when two MDP’s possesss different gravities, and thus the optimal action is different even if the witnessed states are the same. However, an addition of framestacking will change the ”witnessed state” to rather, a combination of last 4 timesteps from which an agent will be able to adapt to different gravities. Thus, we cannot simply generate ”random-MDP”s as a valid benchmark.

Thus, to prevent these ambiguities, we simply construct a family of MDP’s by using one single transition T(st,at)→st+1, but use different initial starting states, and let reward r be independent of θ, and θ controls only the initial state s0. This solves the above problem if the state also contains the gravity parameter. This way, there is always one optimal action given each state. We use a non-linear RNN cell (with additional stochasticities as an option) to simulate the transition T, as well as nonlinear functions for reward. Conceptually, an RNN may approximate any sequential transition, and thus with a large enough cell, may simulate any MDP.

We see that various forms of stochasticity (pure random stochasticity as well as action stickyness, with probabilities shown on legend) also produce higher GCS, as well as better testing performance.

We apply a similar stochastic modification on the RNN-MDP, by adding noise into the state: struet=st+N(0.0,σ) and find that stochasticity in the environment produces a monotone relationship in which higher γ produced better test performance, while determinism in the environment reverses this relationship - lower γ produces better testing performance.

a.1.4 Regularizers in RL

As a reminder to the reader, it should be noted that all algorithms produce a πϕ that optimizes a surrogate loss, but at test time, is evaluated on Eθ∼Θ[Rθ(πϕ)]. For example, adding the discount factor γ and entropy regularization make the surrogate training objective

We formally introduce the exact regularizers and what their effects may entail:

a.1.5.1 GCS’s Correlation with Test Instability

In terms of loss landscape, when both training and testing performance drop, this implies that the trajectory of gradient descent has accidentally reached a peak on the true distribution’s landscape, from too large of a step size. However, other times exist in which the GCS sharply rises when the training curve is stable while testing curve is not, suggesting the lack of smoothness on training landscape is causing instability.

We present an extreme case in which GCS correlation with test performance is diminished: higher complexity on the reward function. If using a synthetic reward (i.e. k-layer convolution networks on the observation, and then average-pooling on the output), we find a monotonic decrease in GCS, but testing performance varied if using the same number of environments for each of the training sets:

We examine the contributions to the GCS, with (A5) further showing that stochasticity reduces the gradient norm significantly, even while the policy has not yet converged.

Applying the same stochasticities to the RandomMazes environment which is a test of exploration strategy in a Maze, and we find that stochasticity actually improves the larger γ ranges for test performance - exploration/RNN tasks have more complexity due to the temporal component, consistent with this result.

Appendix A.2 Hyperparameters and Exact Setups