An Empirical Evaluation on Robustness and Uncertainty of Regularization Methods

Despite apparent human-level performances of deep neural networks (DNN), they behave fundamentally differently from humans. They easily change predictions when small corruptions such as blur and noise are applied on the input (lack of robustness), and they often produce confident predictions on out-of-distribution samples (improper uncertainty measure). While a number of researches have aimed to address those issues, proposed solutions are typically expensive and complicated (e.g. Bayesian inference and adversarial training). Meanwhile, many simple and cheap regularization methods have been developed to enhance the generalization of classifiers. Such regularization methods have largely been overlooked as baselines for addressing the robustness and uncertainty issues, as they are not specifically designed for that. In this paper, we provide extensive empirical evaluations on the robustness and uncertainty estimates of image classifiers (CIFAR-100 and ImageNet) trained with state-of-the-art regularization methods. Furthermore, experimental results show that certain regularization methods can serve as strong baseline methods for robustness and uncertainty estimation of DNNs. 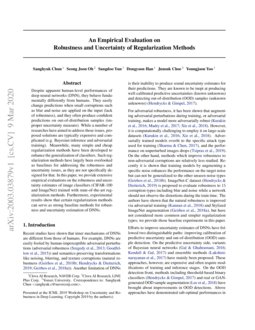 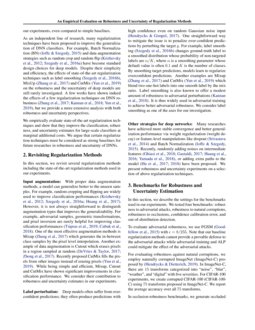 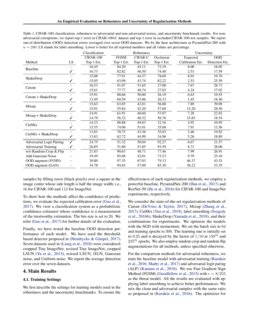 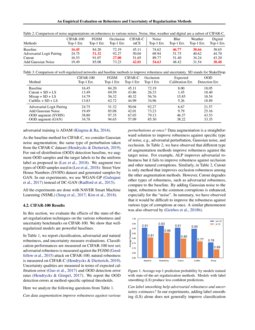 Recent studies have shown that inner mechanisms of DNNs are different from those of humans. For example, DNNs are easily fooled by human-imperceptible adversarial perturbations (adversarial robustness (Szegedy et al., 2013; Goodfellow et al., 2015)) and semantics-preserving transformations like noising, blurring, and texture corruptions (natural robustness (Geirhos et al., 2018b; Hendrycks and Dietterich, 2019; Geirhos et al., 2018a)). Another limitation of DNNs is their inability to produce sound uncertainty estimates for their predictions. They are known to be inept at producing well-calibrated predictive uncertainties (known unknowns) and detecting out-of-distribution (OOD) samples (unknown unknowns) (Hendrycks and Gimpel, 2017).

For adversarial robustness, it has been shown that augmenting adversarial perturbations during training, or adversarial training, makes a model more adversarially robust (Kurakin et al., 2016; Madry et al., 2017; Xie et al., 2018). However, it is computationally challenging to employ it on large-scale datasets (Kurakin et al., 2016; Xie et al., 2018). Adversarially trained models overfit to the specific attack type used for training (Sharma and Chen, 2017), and the performance on unperturbed images drops (Tsipras et al., 2019). On the other hand, methods which improve robustness to non-adversarial corruptions are relatively less studied. Recently it is shown that training models by augmenting a specific noise enhances the performance on the target noise but can not be generalized to the other unseen noise types (Geirhos et al., 2018b). ImageNet-C dataset (Hendrycks and Dietterich, 2019) is proposed to evaluate robustness to 15 corruption types including blur and noise while a network should not observe the distortions during the train time. The authors have shown that the natural robustness is improved via adversarial training (Kannan et al., 2018) and Stylized ImageNet augmentation (Geirhos et al., 2018a), but have not considered more common and simpler regularization types; we provide those baseline experiments in this paper.

Efforts to improve uncertainty estimates of DNNs have followed two distinguishable paths: improving calibration of predictive uncertainty and out-of-distribution (OOD) sample detection. On the predictive uncertainty side, variants of Bayesian neural networks (Gal and Ghahramani, 2016; Kendall and Gal, 2017) and ensemble methods (Lakshminarayanan et al., 2017) have mainly been proposed. These approaches, however, are expensive and often require modifications of training and inference stages. On the OOD detection front, methods including threshold-based binary classifiers (Hendrycks and Gimpel, 2017) and real or GAN-generated OOD sample augmentation (Lee et al., 2018) have brought about improvements in OOD detections. Above approaches have demonstrated sub-optimal performances in our experiments, even compared to simple baselines.

As an independent line of research, many regularization techniques have been proposed to improve the generalization of DNN classifiers. For example, Batch Normalization (BN)

We empirically evaluate state-of-the-art regularization techniques and show that they improve the classification, robustness, and uncertainty estimates for large-scale classifiers at marginal additional costs. We argue that certain regularization techniques must be considered as strong baselines for future researches in robustness and uncertainty of DNNs.

which generates the in-between class samples by the pixel level interpolation. Another example of data augmentation is Cutout which erases pixels in a region sampled at random

(DeVries and Taylor, 2017; Zhong et al., 2017). Recently proposed CutMix fills the pixels from other images instead of erasing pixels (Yun et al., 2019). While being simple and efficient, Mixup, Cutout and CutMix have shown significant improvements in classification performance. We consider their contribution to robustness and uncertainty estimates in our experiments.

α/K, where α is a smoothing parameter whose default value is often 0.1 and K is the number of classes. By smoothing target predictions, models learn to regularize overconfident predictions. Another examples are Mixup (Zhang et al., 2017) and CutMix (Yun et al., 2019) which blend two one-hot labels into one smooth label by the mix ratio. Label smoothing is also known to offer a modest amount of robustness to adversarial perturbations (Kannan et al., 2018). It is thus widely used in adversarial training to achieve better adversarial robustness. We consider label smoothing as one of the axes for our investigation.

Other strategies for deep networks:

3 Benchmarks for Robustness and Uncertainty Estimation

In this section, we describe the settings for the benchmarks used in our experiments. We tested four benchmarks: robustness to adversarial attacks, robustness to natural corruptions, robustness to occlusions, confidence calibration error, and out-of-distribution detection.

For evaluating robustness against natural corruptions, we employ naturally corrupted ImageNet (ImageNet-C) proposed by (Hendrycks and Dietterich, 2019). In ImageNet-C, there are 15 transforms categorized into “noise”, “blur”, “weather”, and “digital” with five severities. For CIFAR-100 experiments, we create corrupted CIFAR-100 (CIFAR-100-C) using 75 transforms proposed in ImageNet-C. We report the average accuracy over all 75 transforms.

In occlusion robustness benchmarks, we generate occluded samples by filling zeros (black pixels) over a square at the image center whose side length is half the image width; i.e., 16 for CIFAR-100 and 112 for ImageNet.

To show how the methods affect the confidence of predictions, we evaluate the expected calibration error (Guo et al., 2017). We view a classification system as a probabilistic confidence estimator whose confidence is a measurement of the trustworthy estimation. The bin size is set to 20. We refer (Guo et al., 2017) for further details of the evaluation.

We first describe the settings for training models used in the robustness and the uncertainty benchmarks. To ensure the effectiveness of each regularization methods, we employ a powerful baseline, PyramidNet-200 (Han et al., 2017) and ResNet-50 (He et al., 2016) for CIFAR-100 and ImageNet experiments, respectively.

and training epochs to

300. The learning rate is initially set to 0.25 and is decayed by the factor of 1/10 at 150th and 225th epochs. We also employ random crop and random flip augmentations for all methods, unless specified otherwise.

As the baseline method for CIFAR-C, we consider Gaussian noise augmentation; the same type of perturbation taken from the CIFAR-C dataset (Hendrycks and Dietterich, 2019). For out-of-distribution (OOD) detection baseline, we augment OOD samples and the target labels to be the uniform label as proposed in (Lee et al., 2018). We augment two types of OOD samples used in (Lee et al., 2018): Street View House Numbers (SVHN) dataset and generated samples by GAN. In our experiments, we use WGAN-GP (Gulrajani et al., 2017) instead of DC-GAN (Radford et al., 2015).

In this section, we evaluate the effects of the state-of-the-art regularization techniques on the various robustness and uncertainty benchmarks on CIFAR-100. We show that well-regularized models are powerful baselines.

Here we analyze the following questions from Table 1.

Can label smoothing help adversarial robustness and uncertainty estimates? In our experiments, adding label smoothing (LS) alone does not generally improve classification accuracies. Surprisingly, however, we observe that LS improves robustness against adversarial perturbation, calibration error, and OOD detection performance (Table 1). For example, by adding LS, Cutout + ShakeDrop achieves 13.49% classification top-1 error and FGSM top-1 error 69.59% where performances without LS are 15.91% and 88.66% for classification and adversarial robustness respectively. We believe that it is because a model trained with LS produces low confident predictions in general (Figure 1). In particular, LS shows impressive improvements in the expected calibration error, except for Mixup and CutMix families. We believe the result is due to the fact that Mixup and CutMix already contain the label mixing stage that already lowers the prediction confidences; further adding label smoothing makes the overall confidences too low.

Can well-regularized models be a powerful baseline for the robustness and uncertainty estimations? In Table 3

In Table 4, we report the top-1 error on clean images, attacked images, occluded images, naturally corrupted images (subsets of ImageNet-C), and their average. Also we report the mCE (mean corrupted error) normalized by AlexNet (Krizhevsky et al., 2012) which is proposed in (Hendrycks and Dietterich, 2019).

Interestingly, in our experiments, Mixup + label smoothing achieves the state-of-the-art performance on ImageNet-C mCE of 69.14% where current best model is stylized-ImageNet trained model (Geirhos et al., 2018a) with mCE of 69.3%. Note that stylized-ImageNet requires heavy pre-computations to generate the stylized images, and requires additional fine-tuning on ImageNet data.

Methods used in our experiments improve the overall robustness and uncertainty performances at negligible additional costs. We believe that well-regularized models should be considered as powerful baselines for the robustness and the uncertainty estimation benchmarks.