In quantum cryptography, quantum secret sharing (QSS) is a fundamental primitive. QSS can be used to create complex and secure multiparty quantum protocols. Existing QSS protocols are either at the (n, n) threshold 2 level or at the (t, n) threshold d level with a trusted player, where n denotes the number of players and t denotes the threshold number of players. Here, we propose a secure d-level QSS protocol for sharing a secret with efficient simulation. This protocol is more secure, flexible, and practical as compared to the existing QSS protocols: (n, n) threshold 2-level and (t,n) threshold d-level with a trusted player. Further, it does not disclose any information about the secret to players. Its security analysis shows that the intercept-resend, intercept, entangle-measure, forgery, collision and collusion attacks are not possible in this protocol. 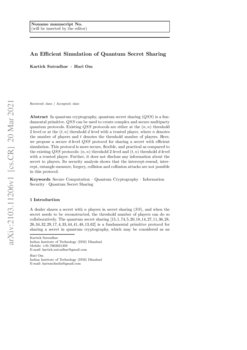 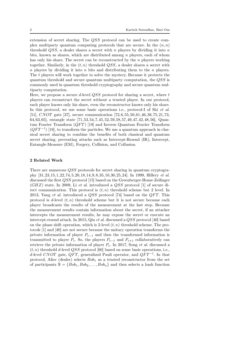 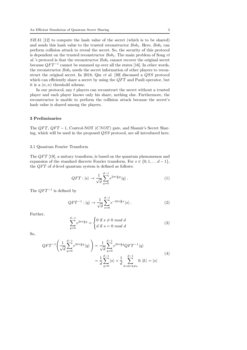 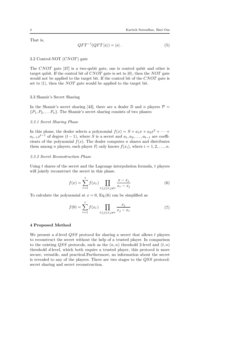 A repairable threshold scheme (which we abbreviate to RTS) is a (τ,n)-th...
Bailey Kacsmar, et al. ∙

(QFT) Nielsen2002 and Inverse Quantum Fourier Transform (QFT−1) Nielsen2002 , to transform the particles. We use a quantum approach in classical secret sharing to combine the benefits of both classical and quantum secret sharing, preventing attacks such as Intercept-Resend (IR), Intercept, Entangle-Measure (EM), Forgery, Collision, and Collusion.

There are numerous QSS protocols for secret sharing in quantum cryptography Mashhadi2019 ; mashhadi2012novel ; hillery1999quantum ; bao2009threshold ; mashhadi2012analysis ; yang2013secret ; Gang4 ; lu2018verifiable ; lau2013quantum ; Hao ; dehkordi2008new ; dehkordi2008efficient ; mashhadi2015two ; dehkordi2008verifiable ; mashhadi2017secure ; mashhadi2015computationally ; mashhadi2013novel . In 1999, Hillery et al. discussed the first QSS protocol hillery1999quantum based on the Greenberger-Home-Zeilinger (GHZ) state. In 2009, Li et al. introduced a QSS protocol bao2009threshold of secure direct communication. This protocol is (t,n) threshold scheme but 2 level. In 2013, Yang et al. introduced a QSS protocol yang2013secret based on the QFT. This protocol is d-level (t,n) threshold scheme but it is not secure because each player broadcasts the results of the measurement at the last step. Because the measurement results contain information about the secret, if an attacker intercepts the measurement results, he may expose the secret or execute an intercept-resend attack. In 2015, Qin et al. discussed a QSS protocol qin2015t based on the phase shift operation, which is 2-level (t,n) threshold scheme. The protocols bao2009threshold and qin2015t are not secure because the unitary operation transforms the private information of player Pe−1 and then the transformed information is transmitted to player Pe. So, the players Pe−1 and Pe+1 collaboratively can retrieve the private information of player Pe. In 2017, Song et al. discussed a (t,n) threshold d-level QSS protocol song2017t based on some basic operations, i.e., d-level CNOT gate, QFT, generalized Pauli operator, and QFT−1. In that protocol, Alice (dealer) selects Bob1 as a trusted reconstructor from the set of participants B={Bob1,Bob2,…,Bobn} and then selects a hash function SHA1 eastlake2001us to compute the hash value of the secret (which is to be shared) and sends this hash value to the trusted reconstructor Bob1. Here, Bob1 can perform collision attack to reveal the secret. So, the security of this protocol is dependent on the trusted reconstructor Bob1. The main problem of Song et al.’s protocol is that the reconstructor Bob1 cannot recover the original secret because QFT−1 cannot be summed up over all the states CommentKao2018 . In other words, the reconstructor Bob1 needs the secret information of other players to reconstruct the original secret. In 2018, Qin et al. Qin2018Multidimensional discussed a QSS protocol which can efficiently share a secret by using the QFT and Pauli operator, but it is a (n,n) threshold scheme.

In our protocol, any t players can reconstruct the secret without a trusted player and each player knows only his share, nothing else. Furthermore, the reconstructor is unable to perform the collision attack because the secret’s hash value is shared among the players.

The QFT, QFT−1, Control-NOT (CNOT) gate, and Shamir’s Secret Sharing, which will be used in the proposed QSS protocol, are all introduced here.

The QFT Nielsen2002 , a unitary transform, is based on the quantum phenomenon and expansion of the standard discrete Fourier transform. For s∈{0,1,…d−1}, the QFT of d-level quantum system is defined as follows:

The QFT−1 is defined by

is a two-qubit gate, one is control qubit and other is target qubit. If the control bit of

shares of the secret and the Lagrange interpolation formula,

t players will jointly reconstruct the secret in this phase.

To calculate the polynomial at x=0, Eq.(6) can be simplified as

We present a d-level QSS protocol for sharing a secret that allows t players to reconstruct the secret without the help of a trusted player. In comparison to the existing QSS protocols, such as the (n,n) threshold 2-level and (t,n) threshold d-level, which both require a trusted player, this protocol is more secure, versatile, and practical.Furthermore, no information about the secret is revealed to any of the players. There are two stages to the QSS protocol: secret sharing and secret reconstruction.

In this phase, the dealer D shares the secret among players P={P1,P2,…Pn}. Initially, the dealer D selects a prime d such that 2≤d≤2n and sets a finite field Zd. Then, the dealer D selects a polynomial f(x)=S+a1x+a2x2+⋯+at−1xt−1 of degree of (t−1), where S is secret, a1,a2,…,at−1 are coefficients of polynomial f(x)∈Zd and the symbol ′+′ is defined as addition modulo d. The dealer computes the classical shares f(xi) and uses the BB84 protocol to encode these classical shares f(xi) in a qubit string bennett1984update . The qubit string of f(xi) is distributed among n players, player Pi only knows the share f(xi). In addition, the dealer D selects the SHA1 hash function to compute the hash value H(S) eastlake2001us and shares it among n players using the polynomial g(x)=H(S)+b1x+b2x2+⋯+bt−1xt−1. Player Pi only knows the share g(xi), where i=1,2,…,n.

Step 2: Player P1 (reconstructor) makes basis state |s1⟩H, where size of the basis state is c-qubit, s1 is his private shadow of the share and c=⌈logd2⌉. Then, player P1 applies QFT on the state |s1⟩H and the resultant state |φ1⟩ is calculated as follows:

Step 3: Player P1 again makes ancillary state |0⟩T, where size of the ancillary state is c-qubit and c=⌈logd2⌉, and then executes CNOT⊗c operations on the combined state |φ1⟩|0⟩T, where the first c-qubits is control qubit and second c-qubits is target qubit. After performing CNOT⊗c operations, the state |φ1⟩ evolves as an entangled state |φ2⟩, where subscript H or T represents home state (non-transmitted state) or transmitted state.

is an eigenvector of

e2πis2d. The combined quantum system of P1 and P2 is shown as follows.

Step 6: Player P2 communicates with player P3 through an authenticated quantum channel to send the ancillary state |k⟩T and keeps |s2⟩ as secret. Player P3 performs t−1 times similar process as done by P2. If t players honestly perform the protocol, then the combined quantum state is obtained as shown below.

Step 7: The ancillary state |k⟩T is sent by Pt back to P1 through an authenticated quantum channel. Player P1 again performs CNOT⊗c operation on his 2c qubits, where the first c-qubits is control qubit and second c-qubits is target qubit. The output state is shown as below.

Step 8: The second c-qubits (i.e., ancillary state |0⟩T) is measured by player P1 in computational basis. If the output of the measurement is |0⟩, then player P1 continues the process; otherwise, he believes that the protocol executes with at least one corrupted player and ends the protocol. Step 9: Player P1 applies QFT−1 on the first c-qubits and measures the output to get the secret f(0)′=∑tr=1 sr mod d. Step 10: Finally, t players perform all the above nine steps again to get the hash value of the secret and player P1 gets the hash value of the secret g(0)′=∑tr=1 hr mod d, where hr is the shadow of hash value shares. Player P1 uses the hash function SHA1 to compute the hash value H(f(0)′) and compares it with the hash value g(0)′. If (H(f(0)′)=g(0)′), then player P1 realizes that all t players have performed the reconstruction phase honestly; otherwise, player P1 believes that there is at least one corrupted player.

If QFT−1 (as given in Equation 2) is applied to the first c-qubits, then the measurement of the output is secret (f(0)′).

Applying QFT−1 to the first c-qubits provides the process of secret recovery as given below: The original secret f(0)′ can be calculated using the Lagrange interpolation and Equation 7 as follows.

Therefore, if this protocol honestly is executed by t players, the reconstructor P1 will get the original secret.

We got efficient results of multiplication after taking 8192 number of average shots.

In this section, we discuss the security and performance analysis of the proposed (t,n) threshold QSS protocol based on some properties.

Here, we analyze the outside (i.e., outside eavesdropper wants to steal the private information of all players) and participant (i.e., attack from one or more dishonest players) attacks. We discuss four types of outside attacks (i.e., Intercept-Resend (IR), Intercept, Entangle-Measure (EM) and Forgery) and two types of participant attacks (i.e., Collision and Collusion) cai2019cryptanalysis ; ting2009participant ; Wang2008 ; wang2011security ; wang2013cryptanalysis ; wang2017security .

In this type of attack, an outside eavesdropper wants to steal the private information of all players. We discuss the Intercept-Resend (IR), Intercept, Entangle-Measure (EM) and Forgery attacks as follows.

with the probability of

The dishonest player P2 performs a more complicated entangle-measure attack. Player P2 prepares an ancillary state |0⟩P2 that gets entangled with the transmitted state |k⟩T using the local unitary operations. Then, player P2 measures the entangle state to get the partial information about player P1’s shadow of the share. After successful completion of honesty test, it can easily be deduced that ηk=1. After performing ¯UTP2, P2 sends |k⟩T back to P1 and measures the ancillary system after execution of CNOT⊗c operation by player P1. If player P2 measures the ancillary state |ϕ(k)⟩P2, P2 cannot get any information about P1’s shadow of the share s1 because of entanglement of |k⟩H and |ϕ(k)⟩P2. So, this attack is also infeasible.

In forgery attack, the participants can execute the protocol with the fake shares. The proposed QSS protocol can prevent the forgery attack, which is one of the important issues, where the participants can provide the fake shares. If any dishonest player performs the Pauli operator with the fake shadow, the original secret cannot be reconstructed correctly. In the proposed protocol, player P1 uses the hash function SHA1 to compute the hash value H(f(0)′) and compares it with the hash value g(0)′. If (H(f(0)′)=g(0)′), then P1 shares the secret with other t−1 players; otherwise, P1 realizes that at least one player performs the reconstruction phase dishonestly and terminates the reconstruction phase. So, the forgery attack is not possible in our quantum (t,n) threshold QSS protocol.

This type of attack is performed by one or more dishonest players to reveal the secret information.

Collision (attack from one) Attack:

Collusion (attack from more than one dishonest players) Attack:

In this paper, we discussed a secret-sharing protocol in which t players can reconstruct the secret without the help of a trusted player. In comparison to existing QSS protocols, our protocol is more secure, versatile, and practical. The reconstructor P1 only knows his share and nothing else; even the secret’s hash value is unknown to him. Since the reconstructor P1 only knows his share, it cannot perform the collision attack.

This article does not contain any studies with human or animal subjects performed by the any of the authors. The manuscript has been prepared following the instructions provided in the Authors Guidelines of the journal.