In order to cluster or partition data, we often use Expectation-and-Maximization (EM) or Variational approximation with a Gaussian Mixture Model (GMM), which is a parametric probability density function represented as a weighted sum of K̂ Gaussian component densities. However, model selection to find underlying K̂ is one of the key concerns in GMM clustering, since we can obtain the desired clusters only when K̂ is known. In this paper, we propose a new model selection algorithm to explore K̂ in a Bayesian framework. The proposed algorithm builds the density of the model order which any information criterions such as AIC and BIC basically fail to reconstruct. In addition, this algorithm reconstructs the density quickly as compared to the time-consuming Monte Carlo simulation. 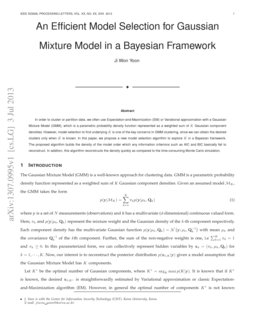 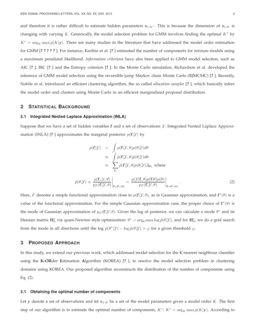 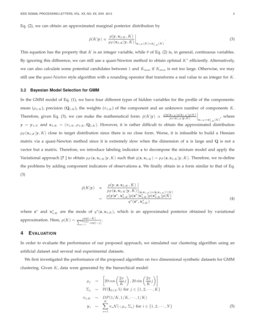 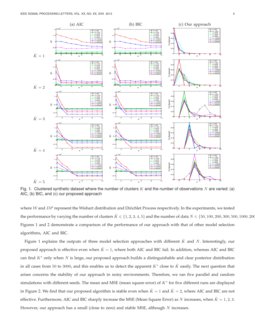 The Gaussian Mixture Model (GMM) is a well-known approach for clustering data. GMM is a parametric probability density function represented as a weighted sum of K Gaussian component densities. Given an assumed model MK, the GMM takes the form

where y is a set of N measurements (observations) and it has a multivariate (d-dimensional) continuous valued form. Here, πk and p(y|μk,Qk) represent the mixture weight and the Gaussian density of the k-th component respectively. Each component density has the multivariate Gaussian function p(y|μk,Qk)=N(y;μk,Q−1k) with mean μk and the covariance Q−1k of the kth component. Further, the sum of the non-negative weights is one, i.e ∑Kk=1πk=1 and πk≥0. In this parameterized form, we can collectively represent hidden variables by xk=(πk,μk,Qk) for k=1,⋯,K. Now, our interest is to reconstruct the posterior distribution p(x1:K|y) given a model assumption that the Gaussian Mixture Model has K components.

Let K∗ be the optimal number of Gaussian components, where K∗=argKmaxp(K|y). It is known that if K∗ is known, the desired x1:K∗

is straightforwardly estimated by Variational approximation or classic Expectation-and-Maximization algorithm (EM). However, in general the optimal number of components

K∗ is not known and therefore it is rather difficult to estimate hidden parameters x1:K∗. This is because the dimension of x1:K is changing with varying K. Generically, the model selection problem for GMM involves finding the optimal K∗ by K∗=argKmaxp(K|y). There are many studies in the literature that have addressed the model order estimation for GMM Fruhwirth-Schnatter_2007; Kadane_Lazar_2004; BISHEM01; Roberts98:ModelSelectionGMM; Constantinopoulos_bayesianfeature. For instance, Keribin et al. Keribin_2000 estimated the number of components for mixture models using a maximum penalized likelihood. Information criterions have also been applied to GMM model selection, such as AIC Aitkin85:ModelSelection4MixtureModel, BIC Fraley98:numClust and the Entropy criterion Celeux_Soromenho_1996

Suppose that we have a set of hidden variables f and a set of observations Y. Integrated Nested Laplace Approximation (INLA) Rue09:INLA approximates the marginal posterior p(f|Y) by

In this study, we extend our previous work, which addressed model selection for the K-nearest neighbour classifier using the

3.1 Obtaining the optimal number of components

Let y denote a set of observations and let x1:K be a set of the model parameters given a model order K. The first step of our algorithm is to estimate the optimal number of components, K∗: K∗=argKmaxp(K|y). According to Eq. (4), we can obtain an approximated marginal posterior distribution by

This equation has the property that K is an integer variable, while θ of Eq. (4) is, in general, continuous variables. By ignoring this difference, we can still use a quasi-Newton method to obtain optimal K∗ efficiently. Alternatively, we can also calculate some potential candidates between 1 and Kmax if Kmax is not too large. Otherwise, we may still use the quasi-Newton style algorithm with a rounding operator that transforms a real value to an integer for K.

In the GMM model of Eq. (1), we have four different types of hidden variables for the profile of the components: mean (μ1:K), precision (Q1:K), the weights (π1:K) of the component and an unknown number of components K. Therefore, given Eq. (5), we can make the mathematical form: ~p(K|y)∝p(y|x1:K)p(x1:K)p(K)pF(x1:K|y,K)∣∣x1:K=x∗1:K(K), where y=y1:N and x1:K=(π1:K,μ1:K,Q1:K). However, it is rather difficult to obtain the approximated distribution pF(x1:K|y,K) close to target distribution since there is no close form. Worse, it is infeasible to build a Hessian matrix via a quasi-Newton method since it is extremely slow when the dimension of x is large and Q

is not a vector but a matrix. Therefore, we introduce labeling indicator

z to decompose the mixture model and apply the Variational approach Bishop06:MachineLearning to obtain pF(z,x1:K|y,K) such that q(z,x1:K)=pF(z,x1:K|y,K). Therefore, we re-define the problems by adding component indicators of observations z. We finally obtain in a form similar to that of Eq. (5)

where z∗ and x∗1:K are the mode of q∗(z,x1:K), which is an approximated posterior obtained by variational approximation. Here, p(K)=exp(−K)∑Kmaxj=1exp(−j).

In order to evaluate the performance of our proposed approach, we simulated our clustering algorithm using an artificial dataset and several real experimental datasets.

We first investigated the performance of the proposed algorithm on two dimensional synthetic datasets for GMM clustering. Given K, data were generated by the hierarchical model:

where W and DP represent the Wishart distribution and Dirichlet Process respectively. In the experiments, we tested the performance by varying the number of clusters ^K∈{1,2,3,4,5} and the number of data N∈{50,100,200,300,500,1000,2000,3000}. Figures 1 and 2 demonstrate a comparison of the performance of our approach with that of other model selection algorithms, AIC and BIC.

Figure 1 explains the outputs of three model selection approaches with different ^K and N. Interestingly, our proposed approach is effective even when ^K=1, where both AIC and BIC fail. In addition, whereas AIC and BIC can find K∗ only when N is large, our proposed approach builds a distinguishable and clear posterior distribution in all cases from 50 to 3000, and this enables us to detect the apparent K∗ close to ^K easily.

The next question that arises concerns the stability of our approach in noisy environments. Therefore, we ran five parallel and random simulations with different seeds. The mean and MSE (mean square error) of K∗ for five different runs are displayed in Figure 2. We find that our proposed algorithm is stable even when ^K=1 and ^K=2, where AIC and BIC are not effective. Furthermore, AIC and BIC sharply increase the MSE (Mean Square Error) as N increases, when ^K=1,2,3. However, our approach has a small (close to zero) and stable MSE, although N increases.

We also evaluated the performance of our algorithm with the three well-known data sets used in Richardson97:GMM for real experimental data: Enzymatic activity in the blood of 245 unrelated individuals Bechtel93:Mixture, acidity in a sample of 155 lakes in the Northeastern United States Crawford94:Mixture, and galaxy data with the velocities of 82 distant galaxies.

Figure 3 shows the performance comparison between AIC, BIC, MCMC, and our approach. The top sub-graphs demonstrate the histograms of the datasets with different numbers of mixture components. AIC and BIC with varying K are plotted in the center row of sub-graphs. The bottom sub-figures display plots of the reconstructed distributions of p(K|Y) by MCMC used in Richardson97:GMM and our approach 111The mathematical models used in MCMC and our approach are slightly different..

For Gaussian mixture clustering, we proposed a novel model selection algorithm, which is based on functional approximation in a Bayesian framework. This algorithm has a few advantages as compared to other conventional model selection techniques. First, the proposed approach can quickly provide a proper distribution of the model order which is not provided by other approaches, only a few time-consuming techniques such as Monte Carlo simulation can provide it. In addition, since the proposed algorithm is based on the Bayesian scheme, we do not need to run a cross validation, as is usually done in performance evaluation.