An efficient estimation of nested expectations without conditional sampling

Estimating nested expectations is an important task in computational mathematics and statistics. In this paper we propose a new Monte Carlo method using post-stratification to estimate nested expectations efficiently without taking samples of the inner random variable from the conditional distribution given the outer random variable. This property provides the advantage over many existing methods that it enables us to estimate nested expectations only with a dataset on the pair of the inner and outer variables drawn from the joint distribution. We show an upper bound on the mean squared error of the proposed method under some assumptions. Numerical experiments are conducted to compare our proposed method with several existing methods (nested Monte Carlo method, multilevel Monte Carlo method, and regression-based method), and we see that our proposed method is superior to the compared methods in terms of efficiency and applicability. 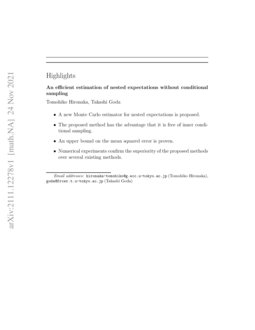 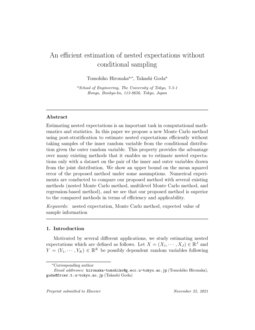 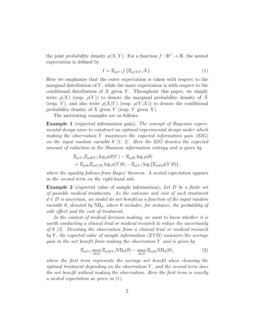 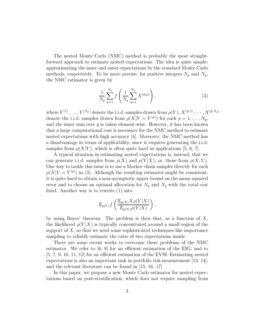 On the Opportunities and Pitfalls of Nesting Monte Carlo Estimators

A Detailed Analysis of Quicksort Algorithms with Experimental Mathematics

Computation of conditional expectations with guarantees

Motivated by several different applications, we study estimating nested expectations which are defined as follows. Let X=(X1,⋯,XJ)∈RJ and Y=(Y1,⋯,YK)∈RK

ρ(X,Y). For a function f:RJ→R, the nested expectation is defined by

Here we emphasize that the outer expectation is taken with respect to the marginal distribution of Y, while the inner expectation is with respect to the conditional distribution of X given Y. Throughout this paper, we simply write ρ(X) (resp. ρ(Y)) to denote the marginal probability density of X (resp. Y), and also write ρ(X|Y) (resp. ρ(Y|X)) to denote the conditional probability density of X given Y (resp. Y given X).

The motivating examples are as follows:

where the equality follows from Bayes’ theorem. A nested expectation appears in the second term on the right-hand side.

Let D be a finite set of possible medical treatments. As the outcome and cost of each treatment d∈D is uncertain, we model its net benefit as a function of the input random variable θ, denoted by NBd, where θ includes, for instance, the probability of side effect and the cost of treatment.

In the context of medical decision making, we want to know whether it is worth conducting a clinical trial or medical research to reduce the uncertainty of θ Welton et al. (2012). Denoting the observation from a clinical trial or medical research by Y, the expected value of sample information (EVSI) measures the average gain in the net benefit from making the observation Y and is given by

The nested Monte Carlo (NMC) method is probably the most straightforward approach to estimate nested expectations. The idea is quite simple: approximating the inner and outer expectations by the standard Monte Carlo methods, respectively. To be more precise, for positive integers Np and Nq, the NMC estimator is given by

A typical situation in estimating nested expectations is, instead, that we can generate i.i.d. samples from ρ(X) and ρ(Y|X), or, those from ρ(X,Y)

. One way to tackle this issue is to use a Markov chain sampler directly for each

ρ(X|Y=Y(p)) in (5). Although the resulting estimator might be consistent, it is quite hard to obtain a non-asymptotic upper bound on the mean squared error and to choose an optimal allocation for Np and Nq with the total cost fixed. Another way is to rewrite (1) into

by using Bayes’ theorem. The problem is then that, as a function of X, the likelihood ρ(Y|X) is typically concentrated around a small region of the support of X, so that we need some sophisticated techniques like importance sampling to reliably estimate the ratio of two expectations inside.

In this section, we first provide a new Monte Carlo estimator for nested expectations using post-stratification. Subsequently we introduce a variant of our proposed method using a linear regression.

For p,q=1,…,√N, let X(p,q) denote the sample of the inner variable X corresponding to Y(p,q). Then our proposed estimator is given by

where the inner sum over q is taken element-wise.

based only on the set of N i.i.d. samples from the joint distribution ρ(X,Y), applying post-stratification to which is important in that the samples X(p,1),…,X(p,√N) are used as a substitute of the samples from the exact conditional distribution ρ(X|Y). We note that, although each X(p,q) can be regarded as a sample from ρ(X|Y=Y(p,q)), using only one inner sample is not enough to approximate the exact inner expectation. This is why we divide the set of N samples into the √N sets of √N samples using post-stratification and use each subset to compute ~X(p).

We end this section with introducing a variant of Algorithm 1.

being a vector of coefficients which satisfies

Our motivation behind introducing this variant is that, instead of using the samples X(p,1),…,X(p,√N) directly, we perturb them to approximate the inner conditional expectation Eρ(X|Y=Y(p,q))X simply by one (perturbed) sample ~X(p,q). Then the resulting estimator is given in a non-nested form.

In this section we show an upper bound on the mean squared error (MSE) of our proposed method. Here we show the result only for Algorithm 1. It is left open for future research whether a similar result on the MSE also holds for Algorithm 2.

Y, and FYk be the marginal cumulative distribution function for k∈{1,2,…,K}. Assume that every FYk is continuous, that Yj and Yk are mutually independent for all 1≤j<k≤K, that there exist α,β>0 such that

Before proving Theorem 1, we prove Lemma 1.

Let m, N, X(p,q), and Y(p,q) be given as in Algorithm 1, and let FY denote the cumulative distribution function of Y. Under the same assumptions considered in Theorem 1, we have

Let us recall the following two well-known facts as preparation. One fact is on order statistics. For a positive integer n, let U1,…,Un

This inequality can be proven by an induction on n. As the case n=1 trivially holds, let us assume that the inequality holds for n=m and prove the case n=m+1. In fact, it follows from the triangle inequality and the induction assumption that

which completes the proof of (24).

consisting of m2K−k=√NmK−k points, which coincides exactly with the set

As we have assumed that every Yk is mutually independent, applying the inequality (24) and Jensen’s inequality leads to

which completes the proof of (20).

Therefore, under the assumption that every Yk is mutually independent, by using the inequality (24) and Jensen’s inequality, it holds that

Now we are ready to show a proof of Theorem 1.

Throughout this proof, we simply denote by E∙ the expectation with respect to the underlying probability measure of the corresponding random variable ∙. By using Jensen’s inequality, we obtain

In what follows, we show an upper bound on each term on the right-most side of (56). Let us consider the first term. By denoting the i.i.d. copy of the outer random variables {Y(p,q)} by {Y′(p,q)}, using Jensen’s inequality and the inequalities (16) and (17) and applying the results shown in Lemma 1, we have