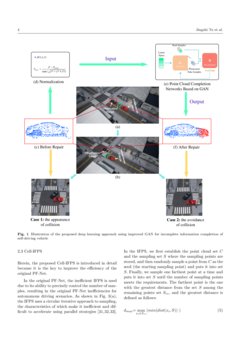 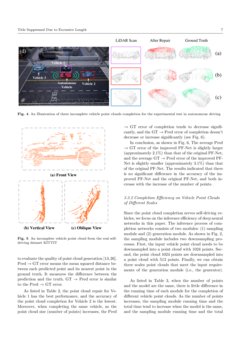 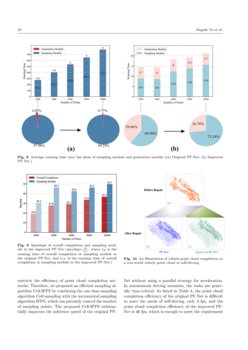 Vehicles are the most concerned investigation target as a dynamic and es...
Yan Xia, et al. ∙

The ApolloScape Dataset for Autonomous Driving

With the wide use of internet-based sensors, a new concept termed as the Internet of Things (IoT) has emerged to facilitate the development of modern industry 1 ; 19 . The ingenious application of intelligent logistics by introducing Industrial Internet of Things (IIoT) significantly promotes the development of the transportation industry, where autonomous driving is the key technology. 3D vision using LiDAR has widely used in autonomous driving due to its lower cost, more robust, richer information, and meeting the mass-production standards 2

. Typically, to detect obstacles and other relevant driving information, the computer vision system receives and analyzes the original point cloud from LiDAR, where the appearance of incomplete point clouds is inevitable owing to limitations of weather, sensor capability, and viewing angle

3 . The emergence of incomplete point clouds, especially fragmentary vehicle point clouds, may cause the reduction of the accuracy of autonomous driving vehicles in object detection, traffic alert, and collision avoidance.

For the above problem, traditional methods, such as interpolation algorithms

, cannot describe the complex geometric characteristics of the vehicle without reference points. In recent years, deep learning is gradually widely applied to 3D vision systems with the rapid development of machine learning. Since the advent of the classic PointNet

. Moreover, the extensions of Convolutional Neural Network (CNN) in 3D have been demonstrated to perform well when 3D voxel grids are used to represent 3D shapes

3 , is proposed by paying attention to the local details of an object, which makes it perform well in accuracy.

Downsampling is a basic operation for large-scale point clouds, which can improve the efficiency of subsequent algorithms, including 3D reconstruction 28 ; 29 , point cloud generation 30 ; 31 , and recognition 32 ; 33 . Uniform downsampling, one of downsampling, is used to obtain uniform sparse point clouds consistent with the geometric shape of the target, so as to remove noise while preserving the geometric features of the target. In the uniform downsampling algorithms, there are two commonly used algorithms: Iterative Farthest Point Sampling (IFPS) 17 and cell sampling 34 . As an incremental sampling algorithm 35 ; 36 , the IFPS is widely applied in point cloud networks such as PointNet++ 17 and PF-Net because of its capability to control number of sampling points. However, the IFPS has poor performance in efficiency due to the characteristics of the incremental sampling algorithm. Cell sampling, as a one-time sampling method 36 , has an excellent performance in efficiency, but it cannot precisely control the number of sampling points.

In this paper, our objective is to repair incomplete vehicle point clouds accurately and efficiently, which can serve object detection, traffic alert, and collision avoidance to improve driving safety in autonomous driving. To address the problem, we proposed to complete incomplete vehicle point clouds of self-driving vehicles using the deep learning approach, i.e., the improved PF-Net. In the improved method, we proposed an efficient uniform downsampling algorithm (Cell-IFPS) by combining the advantages of the IFPS and cell sampling, which significantly improves the inference efficiency of original PF-Net.

The contributions of this paper can be summarized as follows:

(1) We employ a deep learning approach (i.e., the improved PF-Net) to repair incomplete vehicle point clouds that cannot be addressed by traditional methods in autonomous driving.

(2) We improve the efficiency of original PF-Net to meet the requirement of point cloud completion of self-driving vehicles, where an efficient uniform downsampling algorithm by combining the advantages of the IFPS and cell sampling (i.e., the high efficiency and the ability to precisely control the number of sampling points) is presented.

In this section, the specific framework of improved PF-Net will be introduced (see Fig. 2), which predicts the missing part of the point cloud from its incomplete known configuration. Compared with the original PF-Net, we mainly modified the sampling step in the overall architecture. The overall architecture of improved PF-Net consists of three fundamental parts, including Multi-Resolution Encoder (MRE), Point Pyramid Decoder (PPD), and Discriminator Network. The PF-Net is a generative adversarial network 16 , and the Generator consists of MRE and PPD.

First, the improved PF-Net uses Cell-IFPS to extract feature points from the input point cloud in the MRE, which are representative points that can map the whole shape of the input. Then, three scales point clouds including the extracted feature points and the original points are mapped into three individual latent vectors

Fi (i=1,2,3) by three independent Combined Multi-Layer Perceptions (CMLPs). Finally, the combined latent vector is mapped into the final feature vector V by a Multi-Layer Perception (MLP) after those three individual latent vectors Fi are concatenated (see Fig. 2). In the improved PF-Net, CMLP is proposed as the feature extractor. The common MLP, such as PointNet-MLP, cannot combine the low-level and middle-level features well when it only applies the final single layer to obtain the latent vector. Compared with common MLP, the CMLP is found to be able to extract combined latent vector after concatenating multiple dimensional potential vectors stemed from the last four layers (low-level, middle-level, and high-level features), which leads to better use of multi-layer features.

The objective of PDD is to output point clouds with three different resolutions which represent the shape of the missing region by the final feature vector V obtained in the previous step. Therefore, the vector V is first transformed into three feature results FCi with different dimensions (where FCi=1024,512,256neurons, and i=1,2,3) by three fully-connected layers. Then, point clouds with different resolutions are predicted according to different features FCi.

The loss function is created by combining multi-stage completion loss (MCS) and adversarial loss in the improved PF-Net. The MCS is used to minimize the difference between the predicted three stages of point cloud and Ground Truth (GT). The combined loss for three stages is as follows:

The equation of Chamber Distance (CD) is as follows:

where S1 is the predicted point cloud, and S2 is the ground truth point cloud.

The adversarial loss which is inspired by GAN is defined as follows:

Finally, the joint loss of the MCS and the adversarial loss is defined as:

Herein, the proposed Cell-IFPS is introduced in detail because it is the key to improve the efficiency of the original PF-Net.

In the original PF-Net, the inefficient IFPS is used due to its ability to precisely control the number of samples, resulting in the original PF-Net inefficiencies for autonomous driving scenarios. As shown in Fig. 3(a), the IFPS uses a circular iterative approach to sampling, the characteristics of which make it inefficient and difficult to accelerate using parallel strategies 23 ; 24 ; 25 . In the IFPS, we first establish the point cloud set C and the sampling set S where the sampling points are stored, and then randomly sample a point from C as the seed (the starting sampling point) and puts it into set S. Finally, we sample one farthest point at a time and puts it into set S until the number of sampling points meets the requirements. The farthest point is the one with the greatest distance from the set S among the remaining points set Sre, and the greatest distance is defined as follows:

where dist(xi,S) indicates that the distance between xi and each point in the set S is calculated.

As shown in Fig. 3(b), there is another common method: cell sampling, which downsamples the point cloud by constructing spheres with a specified radius, and outputs the point in each sphere closest to the center of the sphere as the sampling point. The sampling method is extremely efficient, but the number of samples can only be controlled by adjusting the radius of the sphere.

Therefore, to sample efficiently and exactly control the number of samples, the efficient Cell-IFPS by combining the advantages of the IFPS and cell sampling is proposed, as shown in Fig. 3(c), the sampling steps are as follows:

The details of the experimental environment are listed in Table 1.

The training dataset of the model is the ShapeNet Part 39 , which is a dataset that selects 16 categories from the ShapeNetCore dataset 40 and annotated with semantic information for the semantic segmentation task of point clouds.

In this section, we used the original PF-Net and the improved PF-Net to complete the vehicle point clouds of different sizes, where we utilized the original PF-Net as a baseline. Then, we used Pred → GT (prediction to ground truth) error and GT → Pred (ground truth to prediction) error to evaluate the results of completion. Finally, we obtained the running time of each step of the models.

To evaluate the accuracy of completion results in autonomous driving, we use Pred → GT error and GT →

Pred error as evaluation metrics, which are widely used to evaluate the quality of point cloud generation

10 ; 17 . Pred → GT error means the mean squared distance between each predicted point and its nearest point in the ground truth. It measures the difference between the prediction and the truth. GT → Pred error is similar to the Pred → GT error.

Since the point cloud completion serves self-driving vehicles, we focus on the inference efficiency of deep neural networks in this paper. The inference process of completion networks consists of two modules: (1) sampling module and (2) generation module. As shown in Fig.

The aforementioned comparative results indicate that:

(2) Compared with the original PF-Net, the efficiency of the improved PF-Net is greatly improved due to the efficient Cell-IFPS, and the maximum speedup is 36.7.

(3) Compared with the IFPS algorithm, as the scale of the point clouds increases, the acceleration effect of the proposed Cell-IFPS increases, and the maximum speedup is 49.7.

In this section, for the incomplete vehicle point cloud from the real self-driving process, we specifically introduce the completion efficiency of the original PF-Net and the improved PF-Net, and briefly describe the completion effect.

In the future, we plan to apply the improved PF-Net to repair incomplete point clouds that include more kinds of obstacles (e.g., trees, roadblocks, telegraph poles) in autonomous driving. Further, the proposed efficient uniform sampling method, Cell-IFPS, will be applied to more tasks for point cloud (e.g., 3D reconstruction, object recognition, point cloud segmentation) due to the sampling being one of the foundations of point cloud processing.

This research was jointly supported by the National Natural Science Foundation of China (Grant No. 11602235), and the Fundamental Research Funds for China Central Universities (2652018091).