The submodular function maximization is an attractive optimization model that appears in many real applications. Although a variety of greedy algorithms quickly find good feasible solutions for many instances while guaranteeing (1-1/e)-approximation ratio, we still encounter many real applications that ask optimal or better feasible solutions within reasonable computation time. In this paper, we present an efficient branch-and-bound algorithm for the non-decreasing submodular function maximization problem based on its binary integer programming (BIP) formulation with a huge number of constraints. Nemhauser and Wolsey developed an exact algorithm called the constraint generation algorithm that starts from a reduced BIP problem with a small subset of constraints taken from the constraints and repeats solving a reduced BIP problem while adding a new constraint at each iteration. However, their algorithm is still computationally expensive due to many reduced BIP problems to be solved. To overcome this, we propose an improved constraint generation algorithm to add a promising set of constraints at each iteration. We incorporate it into a branch-and-bound algorithm to attain good upper bounds while solving a smaller number of reduced BIP problems. According to computational results for well-known benchmark instances, our algorithm achieved better performance than the state-of-the-art exact algorithms. 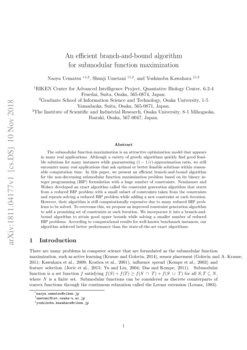 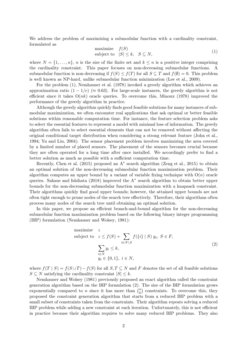 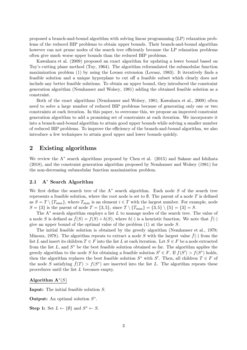 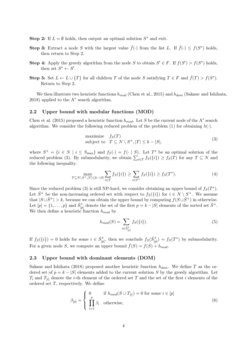 The Power of Randomization: Efficient and Effective Algorithms for Constrained Submodular Maximization

There are many problems in computer science that are formulated as the submodular function maximization, such as active learning

(Jovic et al., 2015; Yu and Liu, 2004; Das and Kempe, 2011). Submodular function is a set function f satisfying f(S)+f(T)≥f(S ∩ T)+f(S ∪ T) for all S,T⊆N, where N is a finite set. Submodular functions can be considered as discrete counterparts of convex functions through the continuous relaxation called the Lovasz extension (Lovasz, 1983). We address the problem of maximizing a submodular function with a cardinality constraint, formulated as

Although the greedy algorithm quickly finds good feasible solutions for many instances of submodular maximization, we often encounter real applications that ask optimal or better feasible solutions within reasonable computation time. For instance, the feature selection problem asks to select the essential features to represent a model with minimal loss of information. The greedy algorithm often fails to select essential elements that can not be removed without affecting the original conditional target distribution when considering a strong relevant feature (John et al., 1994; Yu and Liu, 2004). The sensor placement problem involves maximizing the area covered by a limited number of placed sensors. The placement of the sensors becomes crucial because they are often operated for a long time after once installed. We accordingly prefer to find a better solution as much as possible with a sufficient computation time.

Recently, Chen et al. (2015) proposed an A∗ search algorithm (Zeng et al., 2015) to obtain an optimal solution of the non-decreasing submodular function maximization problem. Their algorithm computes an upper bound by a variant of variable fixing technique with O(n) oracle queries. Sakaue and Ishihata (2018) improved the A∗ search algorithm to obtain better upper bounds for the non-decreasing submodular function maximization with a knapsack constraint. Their algorithms quickly find good upper bounds; however, the attained upper bounds are not often tight enough to prune nodes of the search tree effectively. Therefore, their algorithms often process many nodes of the search tree until obtaining an optimal solution.

In this paper, we propose an efficient branch-and-bound algorithm for the non-decreasing submodular function maximization problem based on the following binary integer programming (BIP) formulation (Nemhauser and Wolsey, 1981):

where f(T∣S)=f(S∪T)−f(S) for all S,T⊆N and F denotes the set of all feasible solutions S⊆N satisfying the cardinality constraint |S|≤k.

(Nemhauser and Wolsey, 1981) adding the obtained feasible solution as a constraint.

Both of the exact algorithms (Nemhauser and Wolsey, 1981; Kawahara et al., 2009) often need to solve a large number of reduced BIP problems because of generating only one or two constraints at each iteration. In this paper, to overcome this, we propose an improved constraint generation algorithm to add a promising set of constraints at each iteration. We incorporate it into a branch-and-bound algorithm to attain good upper bounds while solving a smaller number of reduced BIP problems. To improve the efficiency of the branch-and-bound algorithm, we also introduce a few techniques to attain good upper and lower bounds quickly.

We review the A∗ search algorithms proposed by Chen et al. (2015) and Sakaue and Ishihata (2018), and the constraint generation algorithm proposed by Nemhauser and Wolsey (1981) for the non-decreasing submodular function maximization problem.

We first define the search tree of the A∗ search algorithm. Each node S of the search tree represents a feasible solution, where the root node is set to ∅. The parent of a node T is defined as S=T∖{Tmax}, where Tmax is an element i∈T with the largest number. For example, node S={3} is the parent of node T={3,5}, since T∖{Tmax}={3,5}∖{5}={3}=S.

The A∗ search algorithm employs a list L to manage nodes of the search tree. The value of a node S is defined as ¯f(S)=f(S)+h(S), where h(⋅)

is a heuristic function. We note that

¯f(⋅) give an upper bound of the optimal value of the problem (1) at the node S.

If L=∅ holds, then output an optimal solution S∗ and exit.

Chen et al. (2015) proposed a heuristic function hmod. Let S be the current node of the A∗ search algorithm. We consider the following reduced problem of the problem (1) for obtaining h(⋅).

where S+={i∈N∣i≤Smax} and fS(⋅)=f(⋅∣S). Let T∗ be an optimal solution of the reduced problem (3). By submodularity, we obtain ∑i∈TfS({i})≥fS(T) for any T⊆N and the following inequality.

Since the reduced problem (3) is still NP-hard, we consider obtaining an upper bound of fS(T∗). Let ¯S+ be the non-increasing ordered set with respect to fS({i}) for i∈N∖S+. We assume that |S∪¯S+|>k, because we can obtain the upper bound by computing f(S∪¯S+) in otherwise. Let [p]={1,…,p} and ¯S+[p] denote the set of the first p=k−|S| elements of the sorted set ¯S+. We then define a heuristic function hmod by

We then define a heuristic function hdom by

The heuristic function holds hdom≥fS(T∗) for any given S⊆N. For a given node S, we compute an upper bound ¯f(S)=f(S)+hdom.

The algorithm repeats these procedures until z(t) and f(S∗) meet. We note that the value of z(t) is non-increasing along to the number of iterations and the algorithm must terminate after at most (nk) iterations.

Solve BIP(Q). Let S(t) and z(t) be an optimal solution and the optimal value of BIP(Q), respectively.

Let y(t)=(y(t)1,…,y(t)n) and z(t) be an optimal solution and the optimal value of BIP(Q) at the t-th iteration of the constraint generation algorithm, respectively. We note that z(t) gives an upper bound of the optimal value of the problem (2). To improve the upper bound z(t), it is necessary to add a new feasible solution S′∈F to Q satisfying the following inequality.

For this purpose, we now consider the following problem to generate a new feasible solution S′∈F adding to Q called the pricing problem.

After solving BIP(Q), we obtain at least one feasible solution S♮∈Q attaining the optimal value z(t) of BIP(Q) such that

Let S(t) be the optimal solution of of BIP(Q) corresponding to y(t), where we assume S(t)∉Q. We then consider adding an element j∈S(t)∖S♮ to S♮, and obtain the following inequality by submodularity:

where y(t)j=1 due to j∈S(t). From the inequality (14), we observe that it is preferable to add the element j∈S(t)∖S♮ to S♮ for improving the upper bound z(t). Here, we note that it is necessary to remove another element i∈S♮ if |S♮|=k holds.

For each element i∈S♮∪S(t), we set a random value ri satisfying 0≤ri≤pi. If there are multiple feasible solutions S♮∈Q satisfying the equation (13), then we select one of them at random. We take the k largest elements i∈S♮∪S(t) with respect to the value ri to generate a feasible solution S′∈F.

A set of feasible solutions Q′⊆F.

Take the k largest elements i∈S♮∪S(t) with respect to ri to generate a feasible solution S′∈F.

If h=λ holds, then output Q′ and exit. Otherwise, return to Step 2.

Solve BIP(Q+). Let S(t) and z(t) be an optimal solution and the optimal value of BIP(Q+), respectively.

If z(t)=f(S∗) holds, then output an optimal solution S∗ and exit.

The branch-and-bound algorithm employs a stack list L to manage nodes of the search tree. The value of a node (S0,S1) is defined as the optimal value z(S0,S1) of the following reduced BIP problem BIP(Q+,S0,S1):

where Q+ is the set of feasible solution generated by the improved constraint generation algorithm so far. We note that z(S0,S1) gives an upper bound of the optimal value of the problem (2) at the node (S0,S1); i.e., under the condition that yi=0 (i∈S0) and yi=1 (i∈S1).

We start with a pair of sets Q={S} and Q+={S}, where S is the initial feasible solutions obtained by the greedy algorithm (Nemhauser and Wolsey, 1981; Minoux, 1978). To obtain good upper and lower bounds quickly, we first apply the first k iterations of the improved constraint generation algorithm. We then repeat to extract a node (S0,S1) from the top of the stack list L and insert its children into the top of the stack list L at each iteration.

Apply the first k iterations of ICG(S,λ) to update the sets Q and Q+ and the best feasible solution S∗.

If L=∅ holds, then output an optimal solution S∗ and exit.

We finally propose an improved branch-and-bound algorithm that introduces (i) the heuristic function hdom to obtain a good upper bound quickly and (ii) a local search algorithm to improve the lower bound from the best feasible solution obtained so far.

The computational cost of evaluating the heuristic function hdom is much cheaper than that of solving a reduced BIP problem. We accordingly compute an upper bound ¯f(S1)=f(S1)+hdom(S1) of the problem (2) at the node (S0,S1) before solving BIP(Q+,S0,S1), where we set S1+=S1∪S0 for computing hdom(S1).

A node of the branch-and-bound algorithm (S0,S1).

Apply the greedy algorithm from S1 to obtain an initial feasible solution S.

We tested three existing algorithms and three proposed algorithms: (i) the A∗ search algorithm with the heuristic function hmod (A∗-MOD), (ii) the A∗ search algorithm with the heuristic function hdom (A∗-DOM), (iii) the constraint generation algorithm (CG), (iv) the improved constraint generation algorithm (ICG), (v) the branch-and-bound algorithm (BB-ICG) and (vi) the improved branch-and-bound algorithm (BB-ICG+). All algorithms were tested on a personal computer with a 4.0 GHz Intel Core i7 processor and 32 GB memory. For ICG, BB-ICG and BB-ICG+, we use a mixed integer programming (MIP) solver called CPLEX 12.6 for solving BIP problems, and the number of feasible solutions to be generated at each iteration λ is set to 10k based on computational results of preliminary experiments.

Weighted coverage (COV) We are given a set of m items M={1,…,m} and a set of n sensors N={1,…,n}. Let Mj⊆M be the subset of items covered by an item j∈N, and wi≥0 be a weight of item i∈M. The total weighted coverage for the items is defined as

We tested all algorithms for 24 classes of randomly generated instances that are characterized by several parameters. We set n=30,…,55, m=n+1 and k=5,8 for both types of instances. For the facility location instances, gij is a random value taken from interval [0,1]. For the weighted coverage instances, each sensor j∈N randomly covers each item i∈M

0.07 and wi is a random value taken from interval [0,1]. For each class, five instances were generated and tested. For all instances, we set the time limit to one hour (3600 seconds).