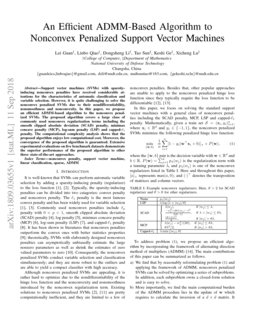 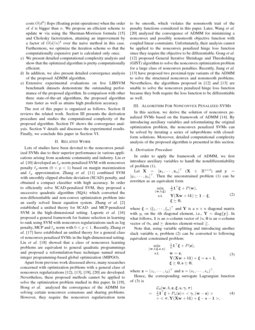 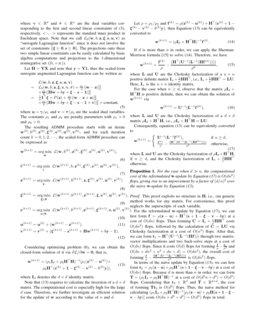 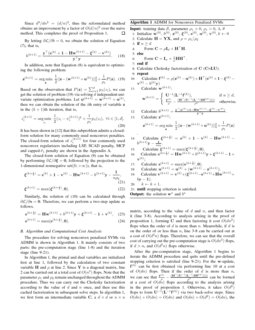 In this paper, we consider a class of nonconvex problems with linear con...
Tao Sun, et al. ∙

In this paper, we consider the problem of recovering a sparse vector fro...
Yuling Jiao, et al. ∙

From an optimizer's perspective, achieving the global optimum for a gene...
Jianqing Fan, et al. ∙

. Consequently, the nonconvex penalized SVMs conduct variable selection and classification simultaneously; and they are more robust to the outliers and are able to yield a compact classifier with high accuracy.

In this paper, we focus on solving the standard support vector machines with a general class of nonconvex penalties including the SCAD penalty, MCP, LSP and capped-ℓ1 penalty. Mathematically, given a train set S=(xi,yi)ni=1, where xi∈Rd and yi∈{−1,1}, the nonconvex penalized SVMs minimize the following penalized hinge loss function:

where the {w,b} pair is the decision variable with w∈Rd and b∈R. P(w)=∑dj=1pλ(wj) is the regularization term with a tunning parameter λ, and pλ(wj) is one of the nonconvex regularizers listed in Table I. Here and throughout this paper, [a]+ represents max(a,0); and (⋅)⊤ denotes the transposition of matrices and column vectors.

To address problem (1), we propose an efficient algorithm by incorporating the framework of alternating direction method of multipliers (ADMM) [14]. The main contributions of this paper can be summarized as follows.

The rest of this paper is organized as follows. Section II reviews the related work. Section III presents the derivation procedure and studies the computational complexity of the proposed algorithm. Section IV shows the convergence analysis. Section V details and discusses the experimental results. Finally, we conclude this paper in Section VI.

Lots of studies have been devoted to the nonconvex penalized SVMs due to their superior performance in various applications arising from academic community and industry. Liu et al.[10] developed an ℓp-norm penalized SVM with nonconvex penalty ℓp-norm (0<p<1) based on margin maximization and ℓp approximation. Zhang et al.[11] combined SVM with smoothly clipped absolute deviation (SCAD) penalty, and obtained a compact classifier with high accuracy. In order to efficiently solve SCAD-penalized SVM, they proposed a successive quadratic algorithm (SQA) which converted the non-differentiable and non-convex optimization problem into an easily solved linear equation system. Zhang et al.[2] established a unified theory for SCAD- and MCP-penalized SVM in the high-dimensional setting. Laporte et al.[16]

proposed a general framework for feature selection in learning to rank using SVM with nonconvex regularizations such as log penalty, MCP and

Apart from previous work discussed above, many researches concerned with optimization problems with a general class of nonconvex regularizations [12, 19, 20, 13] are developed. Nevertheless, these proposed methods cannot be applied to solve the optimization problem studied in this paper. In [19], Hong et al. analyzed the convergence of the ADMM for solving certain nonconvex consensus and sharing problems. However, they require the nonconvex regularization term to be smooth, which violates the nonsmooth trait of the penalty functions considered in this paper. Later, Wang et al.[20] analyzed the convergence of ADMM for minimizing a nonconvex and possibly nonsmooth objective function with coupled linear constraints. Unfortunately, their analysis cannot be applied to the nonconvex penalized hinge loss function since they require the objective to be differentiable. Gong et al.[12] proposed General Iterative Shrinkage and Thresholding (GIST) algorithm to solve the nonconvex optimization problem for a large class of nonconvex penalties. Recently, Jiang et al.[13] have proposed two proximal-type variants of the ADMM to solve the structured nonconvex and nonsmooth problems. Nevertheless, the algorithms proposed in [12] and [13] are unable to solve the nonconvex penalized hinge loss function because they both require the loss function to be differentiable as well.

In this section, we derive the solution of nonconvex penalized SVMs based on the framework of ADMM [14]. By introducing auxiliary variables and reformulating the original optimization problem, the nonconvex penalized SVMs can be solved by iterating a series of subproblems with closed-form solutions. Moreover, detailed computational complexity analysis of the proposed algorithm is presented in this section.

In order to apply the framework of ADMM, we first introduce auxiliary variables to handl the nondifferentiability of problem (1).

Note that, using variable splitting and introducing another slack variable s, problem (2) can be converted to following equivalent constrained problem:

Hence, the corresponding surrogate Lagrangian function of (3) is

where γ∈Rd and τ∈Rn are the dual variables corresponding to the first and second linear constraints of (3), respectively. <⋅,⋅> represents the standard inner product in Euclidean space. Note that we call L0(w,b,z,ξ,s,u,v) as “surrogate Lagrangian function” since it does not involve the set of constraints {ξ⪰0,s⪰0}. The projections onto these two simple linear constraints can be easily calculated by basic algebra computations and projections to the 1-dimensional nonnegative set ([0,+∞)).

Let H=YX and note that y=Y1, thus the scaled-form surrogate augmented Lagrangian function can be written as

where u=γ/ρ1 and v=τ/ρ2 are the scaled dual variables. The constants ρ1 and ρ2 are penalty parameters with ρ1>0 and ρ2>0.

Considering optimizing problem (6), we can obtain the closed-form solution of it via ∂L/∂w=0, that is,

where Id denotes the d×didentity matrix.

Note that (13) requires to calculate the inversion of a d×d matrix. The computational cost is especially high for the large d case. Therefore, we further investigate an efficient solution for the update of w according to the value of n and d.

If d is more than n in order, we can apply the Sherman-Morrison formula [15] to solve (14). Therefore, we have

where L and U are the Cholesky factorization of a n×n positive definite matrix In+1ρHH⊤, i.e., In+1ρHH⊤=LU. Here, In is the n×n identity matrix.

For the case when n≥d, observe that the matrix ρId+H⊤H is positive definite, then we can obtain the solution of w(k+1) via

where L and U are the Cholesky factorization of a d×d matrix ρId+H⊤H, i.e., ρId+H⊤H=LU.

Consequently, equation (13) can be equivalently converted to

This proof exploits no structure in H, i.e., our generic method works for any matrix. For convenience, this proof neglects the superscripts of each variable.

Since d3/dn2=(d/n)2, thus the reformulated method obtains an improvement by a factor of O(d/n)2 over the naive method. This completes the proof of Proposition 1. ∎

By letting ∂L/∂b=0, we obtain the solution of Equation (7), that is,

In addition, note that Equation (LABEL:eq7) is equivalent to optimizing the following problem:

Based on the observation that P(z)=∑di=1pλ(zi), we can get the solution of problem (19) via solving d independent univariate optimization problems. Let ψ(k+1)=w(k+1)+u(k), then we can obtain the solution of the ith entry of variable z in the (k+1)th iteration, that is,

The closed-form solution of Equation (9) can be obtained by performing ∂L/∂ξ=0, followed by the projection to the 1-dimensional nonnegative set([0,+∞)), that is,

Similarly, the solution of (10) can be calculated through ∂L/∂s=0. Therefore, we can perform a two-step update as follows.

The procedure for solving nonconvex penalized SVMs via ADMM is shown in Algorithm 1. It mainly consists of two parts: the pre-computation stage (line 1-8) and the iteration stage (line 9-21).

In Algorithm 1, the primal and dual variables are initialized first at line 1, followed by the calculation of two constant variable H and ρ at line 2. Since Y is a diagonal matrix, line 2 can be carried out at a total cost of O(n2) flops. Note that the parameter ρ1 and ρ2 remain unchanged throughout the ADMM procedure. Thus we can carry out the Cholesky factorization according to the value of d and n once, and then use this cached factorization in subsequent solve steps. In algorithm 1, we first form an intermediate variable C, a d×d or n×n matrix, according to the value of d and n, and then factor it (line 3-8). According to analysis arising in the proof of proposition 1, forming C and then factoring it cost O(dn2) flops when the order of d is more than n. Meanwhile, if d is on the order of or less than n, line 3-8 can be carried out at a cost of O(d2n) flops. Therefore, we can see that the overall cost of carrying out the pre-computation stage is O(dn2) flops, if d>n, and O(d2n) flops otherwise.

After the pre-computation stage, Algorithm 1 begins to iterate the ADMM procedure and quits until the pre-defined stopping criterion is satisfied (line 9-21). For the w-update, f(k) can be first obtained via performing line 10 at a cost of O(dn) flops. Then if the order of d is more than n, we can see that f(k)ρ−(H⊤(U−1(L−1(Hf(k)))))ρ2 can be formed at a cost of O(dn) flops according to the analysis arising in the proof of proposition 1. Otherwise, it takes O(d2) flops to form U−1(L−1f(k)) via two back-solve steps. Since O(dn)+O(dn)=O(dn) and O(dn)+O(d2)=O(dn), the w-update costs O(dn) flops in any case. In terms of the update of z, it has been shown that we can get the solution of z(k+1) by solving d independent univariate optimization problems and each of these univariate optimization problems owns a closed-form solution. Therefore, this step can be carried out at a cost of O(d)×O(1)=O(d) flops. Moreover, line 12 and line 14-20 can be easily carried out at a cost of O(dn) flops in total. Since O(dn)+O(d)+O(dn)=O(dn), thus it takes O(dn) flops per iteration.

As a result, we can see that the overall computational cost of Algorithm 1 is

The computational complexity shown in (25) demonstrates the efficiency of the proposed algorithm. In addition, note that the computational complexity analysis discussed above does not consider the sparse structure of the feature matrix. When exploring the sparsity, the overall computational complexity of Algorithm 1 can be further decreased. Meanwhile, it has been shown that ADMM can converge to modest accuracy-sufficient for many applications-within a few tens of iterations in [14]. The experimental results also demonstrate this point. We find that Algorithm 1 always converges within only a few tens of iterations to get a reasonable result by appropriately tuning the parameter λ, θ, ρ1 and ρ2.

In this section, we present the detailed convergence analysis of the proposed algorithm. To present the analysis, we first modify a little about the scheme for updating z(k+1), that is,

where β>0 but is small. If β=0, (IV) equals to (LABEL:eq7); and if β>0 is very small, (IV) is very close to (LABEL:eq7). After that, we give the convergence analysis following the proof framework built in [20], which is also used in [21, 22]. However, it’s noting that our work is totally not an simple extension of [20]. As mentioned before, [20] cannot be applied to solve the nonconvex penalized hinge loss function since it requires the loss function to be differentiable.

Before giving the convergence analysis, We need following two assumptions.

Now we introduce several definitions and properties needed in the analysis.

We say f(x) is strongly convex with constant δ≥0, if the function f(x)−δ∥x∥22 is also convex.

To simplify the presentation, we use

Now, we are prepared to present the convergence analysis of our algorithm.

Similarly, we can obtain the following inequalities