The estimation of high dimensional precision matrices has been a central topic in statistical learning. However, as the number of parameters scales quadratically with the dimension p, many state-of-the-art methods do not scale well to solve problems with a very large p. In this paper, we propose a very efficient algorithm for precision matrix estimation via penalized quadratic loss functions. Under the high dimension low sample size setting, the computation complexity of our algorithm is linear in the sample size and the number of parameters, which is the same as computing the sample covariance matrix. 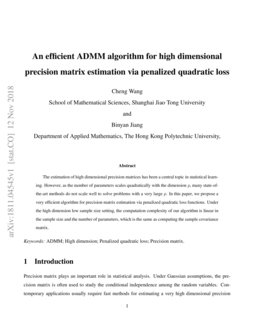 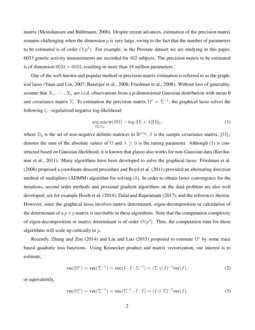 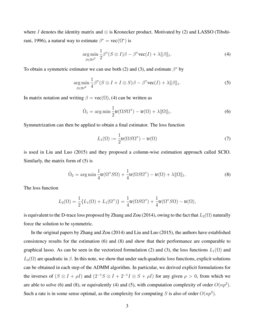 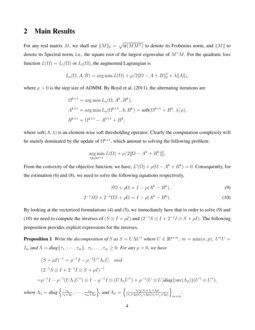 (Meinshausen and Bühlmann, 2006). Despite recent advances, estimation of the precision matrix remains challenging when the dimension p is very large, owing to the fact that the number of parameters to be estimated is of order O(p2). For example, in the Prostate dataset we are studying in this paper, 6033 genetic activity measurements are recorded for 102 subjects. The precision matrix to be estimated is of dimension 6033×6033, resulting in more than 18 million parameters.

One of the well-known and popular method in precision matrix estimation is referred to as the graphical lasso (Yuan and Lin, 2007; Banerjee et al., 2008; Friedman et al., 2008). Without loss of generality, assume that X1,⋯,Xn

are i.i.d. observations from a p-dimensional Gaussian distribution with mean

where Op is the set of non-negative definite matrices in Rp×p, S is the sample covariance matrix, ∥Ω∥1 denotes the sum of the absolute values of Ω and λ≥0 is the tuning parameter. Although (1) is constructed based on Gaussian likelihood, it is known that glasso also works for non-Gaussian data (Ravikumar et al., 2011). Many algorithms have been developed to solve the graphical lasso. Friedman et al. (2008) proposed a coordinate descent procedure and Boyd et al. (2011) provided an alternating direction method of multipliers (ADMM) algorithm for solving (1). In order to obtain faster convergence for the iterations, second order methods and proximal gradient algorithms on the dual problem are also well developed; see for example Hsieh et al. (2014), Dalal and Rajaratnam (2017), and the references therein. However, since the graphical lasso involves matrix determinant, eigen-decomposition or calculation of the determinant of a p×p matrix is inevitable in these algorithms. Note that the computation complexity of eigen-decomposition or matrix determinant is of order O(p3). Thus, the computation time for these algorithms will scale up cubically in p.

by some trace based quadratic loss functions. Using Kronecker product and matrix vectorization, our interest is to estimate,

denotes the identity matrix and

⊗ is Kronecker product. Motivated by (2) and LASSO (Tibshirani, 1996), a natural way to estimate β∗=vec(Ω∗) is

To obtain a symmetric estimator we can use both (2) and (3), and estimate β∗ by

In matrix notation and writing β=vec(Ω), (4) can be written as

Symmetrization can then be applied to obtain a final estimator. The loss function

is used in Liu and Luo (2015) and they proposed a column-wise estimation approach called SCIO. Similarly, the matrix form of (5) is

is equivalent to the D-trace loss proposed by Zhang and Zou (2014), owing to the fact that L2(Ω) naturally force the solution to be symmetric.

In the original papers by Zhang and Zou (2014) and Liu and Luo (2015), the authors have established consistency results for the estimation (6) and (8) and show that their performance are comparable to graphical lasso. As can be seen in the vectorized formulation (2) and (3), the loss functions L1(Ω) and L2(Ω) are quadratic in β. In this note, we show that under such quadratic loss functions, explicit solutions can be obtained in each step of the ADMM algorithm. In particular, we derived explicit formulations for the inverses of (S⊗I+ρI) and (2−1S⊗I+2−1I⊗S+ρI) for any given ρ>0, from which we are able to solve (6) and (8), or equivalently (4) and (5), with computation complexity of order O(np2). Such a rate is in some sense optimal, as the complexity for computing S is also of order O(np2).

For any real matrix M, we shall use ∥M∥2=√tr(MMT) to denote its Frobenius norm, and ∥M∥

to denote its Spectral norm, i.e., the square root of the largest eigenvalue of

MTM. For the quadratic loss function L(Ω)=L1(Ω) or L2(Ω), the augmented Lagrangian is

where soft(A,λ) is an element-wise soft thresholding operator. Clearly the computation complexity will be mainly dominated by the update of Ωk+1, which amount to solving the following problem:

From the convexity of the objective function, we have, L′(Ω)+ρ(Ω−Ak+Bk)=0. Consequently, for the estimation (6) and (8), we need to solve the following equations respectively,

By looking at the vectorized formulations (4) and (5), we immediately have that in order to solve (9) and (10) we need to compute the inverses of (S⊗I+ρI) and (2−1S⊗I+2−1I⊗S+ρI). The following proposition provides explicit expressions for the inverses.

The main technique used for deriving the above proposition is the well-known Woodbury matrix identity. The derivation involves lengthy and tedious calculations and is hence omitted. Nevertheless, one can simply verify the proposition by showing for example (S+ρI)(ρ−1I−ρ−1UTΛ1U)=(ρ−1I−ρ−1UTΛ1U)(S+ρI)=I. By Proposition 1, and the following equations:

where ∘ denotes the Hadamard product, we can obtain the following theorem:

Note that when S is the the sample covariance, U and Λ

can be obtained from the singular value decomposition (SVD) of

X=(X1,…,Xn) whose complexity is of order O(mnp). On the other hand, the solutions obtained in Theorem 1 involves only elementary matrix operations of p×m and m×m matrices and thus the complexity for solving (9) and (10) can be seen to be of order O(mnp+mp2)=O(np2).

Generally, we can specify different weights for each element and consider the estimation

The ADMM algorithm will be the same as the l1 penalized case except the Ak+1 related update is replaced by a element-wise soft thresholding with different thresholding parameters.

Similarly, for the graphical lasso, we can also use ADMM (Boyd et al., 2011) to implement the minimization where the loss function is L(Ω)=tr(SΩ)−log|Ω|. The update for Ωk+1 is obtained by solving ρΩ−Ω−1=ρ(Ak−Bk)−S. Denote the eigenvalue decomposition of ρ(Ak−Bk)−S as QTΛ0Q where Λ0=diag{a1,⋯,ap}, we can obtain a closed form solution,

Compared with the algorithm based on quadratic loss functions, the computational complexity is dominated by the eigenvalue decomposition of p×p matrices.

In this section, we conduct several simulations to illustrate the efficiency and estimation accuracy of our proposed methods. We consider the following two precision matrices:

where Ω1 is an asymptotic sparse matrix with many small elements and Ω2 is a sparse matrix where each column/row only has at most three non-zero elements. For all of our simulations, we set the sample size n=200 and generate the data X1,⋯,Xn from N(0,Σ) with Σ=Ω−11 or Ω−12.

For notation convenience, we shall use the term “EQUAL” to denote our proposed Efficient admm algorithm via the QUAdratic Loss (4), and similarly, use “EQUALs” to denote the estimation based on the symmetric quadratic loss (5). An R package “EQUAL” has been developed to implement our methods. For comparison, we consider the following competitors:

Table 1 summaries the computation time in seconds based on 10 replications where all methods are implemented in R with a PC with 3.3 GHz Intel Core i7 CPU and 16GB memory. For all the methods, we solve a solution path corresponding to 50 lambda values ranging from λmax to λmax√logp/n. Here λmax is the maximum absolute elements of the sample covariance matrix. Although the stopping criteria is different for each method, we can see from Table 1 the computation advantage of our methods. In particularly, our proposed algorithms are much faster than the original quadratic loss based methods “SCIO” or “D-trace” for large p. In addition, we can roughly observe that the required time increases quadratically in p in our proposed algorithms.

The second simulation is designed to evaluate the performance of estimation accuracy. Given the true precision matrix Ω and an estimator ^Ω, we report the following four loss functions:

Table 2 reports the simulation results where the tuning parameter is chosen by five-fold cross-validations. We can see that the performance of all three estimators are comparable, indicating that the penalized quadratic loss estimator is also reliable for high dimensional precision matrix estimation. We also observe that the estimator based on (5) has slightly smaller estimation error than those based on (4). As shown in Table 1 , the computation for quadratic loss estimator are much faster than glasso. Moreover, to check the singularity of the estimation, we also report the minimum eigenvalue for each estimation in the final column of Table 2. We observe that all estimators are well estimated to be positive definite.

Finally, we apply our proposal to the Prostate dataset which is publicly available at https://web.stanford.edu/~hastie/CASI_files/DATA/prostate.html. The data records 6033 genetic activity measurements for the control group (50 subjects) and the prostate cancer group (52 subjects). Here, the data dimension p is 6033 and the sample size n is 50 or 52. We estimate the 6033×6033 precision for each group. Since our EQUAL and EQUALs give similar results, we only report the estimation for EQUALs. It took less than 20 minutes for EQUALs to obtain the solution paths while “glasso” can not produce the solution due to out of memory in R. The sparsity level of the solution paths are plotted in the upper panel of Figure 1. To compare the precision matrices between the two groups, the network graphs of the EQUALs estimators with tuning λ=0.75 are provided in the lower panel of Figure 1.