An effective version of definability in metric model theory 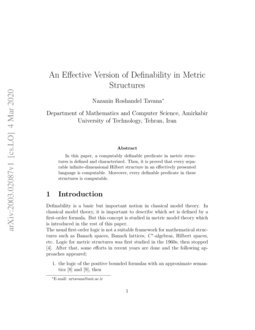 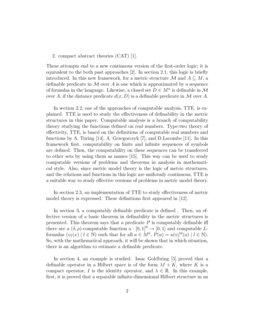 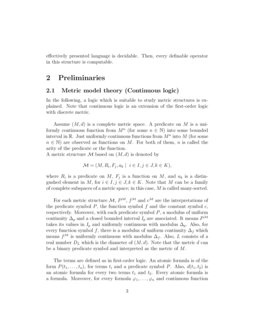 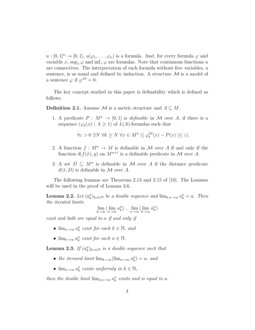 Definability is a basic but important notion in classical model theory. In classical model theory, it is important to describe which set is defined by a first-order formula. But this concept is studied in metric model theory which is introduced in the rest of this paper. The usual first-order logic is not a suitable framework for mathematical structures such as Banach spaces, Banach lattices, C∗-algebras, Hilbert spaces, etc. Logic for metric structures was first studied in the 1960s; then stopped [4]. After that, some efforts in recent years are done and the following approaches appeared;

In section 2.2, one of the approaches of computable analysis, TTE, is explained. TTE is used to study the effectiveness of definability in the metric structures in this paper. Computable analysis is a branch of computability theory studying the functions defined on real numbers. Type-two theory of effectivity, TTE, is based on the definitions of computable real numbers and functions by A. Turing [14], A. Grzegorczyk [7], and D.Lacombe [11]. In this framework first, computability on finite and infinite sequences of symbols are defined. Then, the computability on these sequences can be transferred to other sets by using them as names [15]. This way can be used to study computable versions of problems and theorems in analysis in mathematical style. Also, since metric model theory is the logic of metric structures, and the relations and functions in this logic are uniformly continuous, TTE is a suitable way to study effective versions of problems in metric model theory.

In section 2.3, an implementation of TTE to study effectiveness of metric model theory is expressed. These definitions first appeared in [12].

In section 3, a computably definable predicate is defined . Then, an effective version of a basic theorem in definability in the metric structures is presented. This theorem says that a predicate P is computably definable iff there are a (δ,ρ)-computable function u:[0,1]N→[0,1] and computable L-formulas (ψl(x)∣l∈N) such that for all a∈Mk, P(a)=u(ψMl(a)∣l∈N)

. So, with the mathematical approach, it will be shown that in which situation, there is an algorithm to estimate a definable predicate.

In section 4, an example is studied. Issac Goldbring [5] proved that a definable operator in a Hilbert space is of the form λI+K, where K is a compact operator, I is the identity operator, and λ∈R. In this example, first, it is proved that a separable infinite-dimensional Hilbert structure in an effectively presented language is decidable. Then, every definable operator in this structure is computable.

In the following, a logic which is suitable to study metric structures is explained. Note that continuous logic is an extension of the first-order logic with discrete metric.

where Ri is a predicate on M, Fj is a function on M, and ak is a distingushed element in M, for i∈I,j∈J,k∈K. Note that M can be a family of complete subspaces of a metric space; in this case, M is called many-sorted.

For each metric structure M, PM, fM and cM are the interpretations of the predicate symbol P, the function symbol f and the constant symbol c, respectively. Moreover, with each predicate symbol P, a modulus of uniform continuity Δp and a closed bounded interval Ip are associated. It means PM takes its values in Ip and uniformly continuous with modulus Δp. Also, for every function symbol f, there is a modulus of uniform continuity Δf which means fM is uniformly continuous with modulus Δf. Also, L consists of a real number DL which is the diameter of (M,d). Note that the metric d can be a binary predicate symbol and interpreted as the metric of M.

The terms are defined as in first-order logic. An atomic formula is of the form P(t1,…,tn), for terms ti and a predicate symbol P. Also, d(t1,t2) is an atomic formula for every two terms t1 and t2. Every atomic formula is a formula. Moreover, for every formula φ1,…,φn and continuous function u:[0,1]n→[0,1], u(φ1,…,φn) is a formula. And, for every formula φ and variable x, supxφ and infxφ are formulas. Note that continuous functions u are connectives. The interpretation of each formula without free variables, a sentence, is as usual and defined by induction. A structure M is a model of a sentence φ if φM=0.

The key concept studied in this paper is definability which is defined as follows.

Assume M is a metric structure and A⊆M.

Let (ank)k,n∈N be a double sequence and limk,n→∞ank=a. Then the iterated limits

exist and both are equal to a if and only if

If (ank)k,n∈N is a double sequence such that

then the double limit limk,n→∞ank exists and is equal to a.

2.2 Type-two theory of the effectivity (TTE)

In this section, the approach used to study the effectivity is introduced briefly. The computability notions on natural numbers, N={0,1,2,…} are as usual. For a fixed finite set of alphabet Σ including 0,1, assume Σ∗ is the set of words (finite sequences on Σ) and Σω is the set of strings (infinite sequences on Σ). It is emphasized that it is a mathematical way to study the computability of problems in the mathematical analysis.

A naming system on a set M is a surjective function ν:⊆X→M where X∈{Σ∗,Σω}. If X=Σ∗, ν is called a notation and if X=Σω, ν is called a representation.

In the following, there are some examples of naming systems.

By the following definition, a new name can be obtained by the former ones.

If there exists a naming system for a set M, a new one can be obtained for Mω and Mk, for every k≥1.

Let δ:⊆X→M be a naming system for a set M where X∈{Σ∗,Σω}. Then, [δ]ω and [δ]k are representations of Mω and Mk, respectively, which are defined by

Similar to the definition in Example 2.5.3, a generalization of Cauchy representation can be defined for an effective metric space. This representation is defined to study the computability of functions and predicates in a metric structure.

For instance, if we let e to be Euclidean metric over R, (R,e,Q,νQ) is a computable metric space. In this case, δR is exactly the Cauchy representation ρC in the Example 2.5.

By the above representation, a continuous function f∈Fωω is computable if there is a computable p∈Σω such that f=ηp.

Below, by the representation η, a new one for the set of continuous total functions f:M1→M2 can be obtained, for every two sets M1 and M2.

Next, the notion of an effectively presented language L and then a computable and a decidable L-structure will be established [12].

A countable signature L is effectively presented if

Similar to computability theory, a notation c for Form, the set of L-formulas exists such that dom(c) is a c.e. set. So, let {φn∣n∈N} be an effective list of the set of all L-formulas.

Now, let (M,d,A,α) be an effective metric space. Put the Cauchy representations δM on M and ρC on [0,1]. Let M be a metric L-structure based on (M,d,A,α). Assume

Therefore, a computable and a decidable metric structure can be defined.

Actually, [β]ω is a naming system for Form(M,L)ω which is the set of all sequences on Form(M,L). Hence, for a decidable metric structure M, there is an algorithm such that for a given L-formula φ(x1,…,xn) and a1,…,an∈M, it returns a good approximation of φM(a1,…,an) in rational numbers. This means that, for each ε>0, r,s∈Q is computably found such that r<φM(a1,…,an)<s and s−r<ε.

In this section, a computably definable predicate is defined and characterized. Let M be a metric structure based on an effective metric space M=(M,d,A,α) and assume ρC=ρ.

The following proposition is Theorem 4.2.3 of [15]. It explains in which situation the limit of a sequence is computable.

Let (xi)i∈N be a (νN,ρ)-computable sequence of real numbers with computable modulus of convergence e:N→N. Then, its limit x=limi→∞xi is computable.

In the following, a computable formula is defined.

An L-formula φ with n free variables is computable in M when φM:Mn→[0,1] is a (δM,ρ)-computable function.

Now, the concept of a computably definable predicate can be established.

Obviously, if an n-arity predicate P is computably definable in M then by Proposition 3.2, P(a) is computable for every a∈Mn.

Below, Corollary 20 of [16] is expressed which is a computable version of Tietze Extension Theorem. It will be used in the proof of Theorem 3.7 to characterize a computably definable predicate.

Thus, the Cauchy representation δ can be defined for [0,1]N as follows

The above function has a closed and co-r.e domain and is (δ,ρ)-computable.

The proof of the third item is as follows: Since ak=limn→∞qnk, there exists N1∈N such that for every n,m≥N1,

And, since al=limn→∞qnl, there exists N2 such that for every n≥N2

The next theorem says that in which situation a predicate is computably definable in metric structures.

according to (*). So, the modulus of uniform convergence of the sequence is computable. By proof of Prop 9.3 of [2],

Therefore, P(a)=limn→∞φMn(a), for every a∈Mk. by Proposition 3.2, P(a) is computable and P is a computably definable predicate.

Since d is a discrete metric, it means there is a formula φ(x) which is equivalent to d(x,D). Moreover, according to Theorem 3.7, d(x,D) is computably definable iff there are a sequence of computable formula {ψk(x)∣ k∈N} and a (δ,ρ)-computable function u:Mn→M such that d(x,D)=u(ψk∣ k∈N). Thus, d(x,D) is computably definable in M if and only if whenever one gives a computable δM-name of a then a ρ-name of d(a,D) can be computed. It means if a∈D or not can be specified. So, D is a computable set in the sense of classical computability theory.

In the following example, assume that the language is effectively presented.