Recent works on single-image super-resolution are concentrated on improving performance through enhancing spatial encoding between convolutional layers. In this paper, we focus on modeling the correlations between channels of convolutional features. We present an effective deep residual network based on squeeze-and-excitation blocks (SEBlock) to reconstruct high-resolution (HR) image from low-resolution (LR) image. SEBlock is used to adaptively recalibrate channel-wise feature mappings. Further, short connections between each SEBlock are used to remedy information loss. Extensive experiments show that our model can achieve the state-of-the-art performance and get finer texture details. 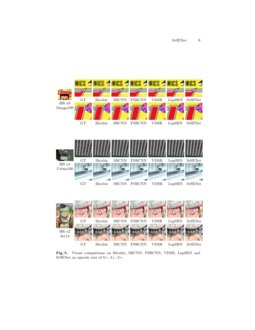 Single-image super-resolution(SISR) is a popular computer vision problem, which aims to reconstruct a high-resolution (HR) image from a low-resolution(LR) image. However, SISR is still considered as an ill-posed inverse problem due to high-level information loss during image downsampling. To solve this problem, many algorithms have been proposed.

was the first successful model that adopted CNN structure to solve SISR problem and obtained great performance improvement. In SRCNN, convolutional neural network was used to learn non-linear mapping from each LR vector to a set of HR vector. Due to the outstanding performance of SRCNN, several deeper and more complicated models has been proposed to follow it, such as VDSR proposed by Kim et al.

[8]. Though VDSR achieved excellence performance, its speed remained slow speed as it use a very deep residual convolutional network and an upscale image preprocess.

In spite of great success achieved in the above architectures, the main issue that how to model mapping from LR to HR images better in a fast and flexible way remained unsolved. In this paper, we have proposed a Super-Resolution Squeeze-and-Excitation Network (SrSENet) for SISR. The concept of SEBlock [6] is employed to better modeling interdependencies between channels. Short connections from input to each SEBlock are used to remedy information lost. And different deconvolution layers are used for different scales under the same feature extraction architecture. The proposed method is evaluated on some popular publicly available benchmarks. Extensive experiments show that our proposed model can achieves competitive accuracy in a more accurate and flexible way. It can greatly reduce model’s complexity by using less layers and allow designing more flexible applications.

The contributions of this paper are two folds:

In this section, we are mainly concentrated on reviewing mainstream deep learning based single-image super-resolution methods. Typically, a SISR network could be approximately divided into two parts. The first part could be seen as a feature extraction block, which is composed of many stacked convolutional layers. The second part records up-scaling information from LR images to HR images. Recent works are concentrated on improving the first part by changing the way of skip connections between inputs of each layer. In other words, they focus on changing the proportion of information captured by initial layers.

We group mainstream deep learning based SISR models into four categories, as shown in Figuree 1. The (a) category contains feature extraction, such as network in [3]. The (b) category like [8] introduces short connection as residual-learning. The (c) category like accepts input in each feature extraction layer. Our proposed model could be categorized into the last category (d). The difference from the other three categories is that each extraction layer block receives input before channel-wise modeling. In this way, network could better learn mapping between LR-HR images.

Different from works on enhancing spatial encoding, SENet [6] was proposed to fully capture channel-wise dependencies through adaptive recalibration. The SENet was separated into two steps, squeeze and excitation, to explicitly model channel interdependencies.

After initial images were input into the first convolution layer, the output feature U∈RW×H×C

1×1×C which represented the correlations of each layer. The excitation operator later was employed to perform feature recalibration through reweighting the original feature mappings

where uc refers to the parameters of the c-th filter and sc denotes the element of c-th channel descriptor. This architecture can help feature extaction parts better caputre the information from input to output. In our work, we combined SEBlock with ResNet for feature extraction.

In order to obtain super-resolution images, a simple idea is to upscale original image first, then final HR image is directly generated from the resulted scaled image. It is not difficult to find that this kind of strategy wastes much time on preprocessing without any obvious advantage.

Shi et al. [16] first proposed to use sub-pixel convolution layer to produce HR images directly. It upscale a LR image by periodic shuffling the elements of a W×H×C⋅r2tensor to a tensor of shape rH×rW×rC. However, it didn’t make full use of the correspondence information from LR to HR. LapSRN [11] was proposed by to use a multiple transposed convolutional layer to deal with different upscale rate in a progressive way. Without any preprocessing step like upscale, LapSRN achieved more accurate information between LR and HR in a fast way.

Following previous works, we use transposed convolutional layer with different parameters for different upscale rate, which can keep network simple and improve the power of networks to record reconstruction information.

The proposed method aims to extract information from the LR image IL and learn mapping function F from IL feature maps to HR images IH. We describe IL with C channels in size of W×H. With upscale rate r, IH is in size of rW×rH. Our ultimate goal is to minimize the loss between the reconstructed images and the corresponding ground truth HR images. In the following, we will describe the details of the proposed method.

Unlike SRResNet and LapSRN, in the residual learning stage, we introduced SrSEBlock to extract features from LR images. The SrSEBlock structure integrates ResNet and SENet, which can better capture information from inputs and better modeling interdependencies between channels.

As VDSR [8] suggested, in the SR ill-posed problem, surrounding pixels were useful to correctly infer center pixel. With larger receptive field a SR model has, it could use more contextual information from LR to better learn correspondences from LR to HR. In our proposed network, the filters of SrSEBlock is in size of 3×3×64. Therefore, in case of depth D layer, its receptive field could be seen as (2×D+1)×(2×D+1) in the original image space. The bigger receptive field means our network can use more context to reconstruct images.

As we know, with the increase of network depth, gradient disappearance or explosion will occur during training and the high-frequency information will also disappear. So, we introduce a short connection between SrSEBlocks which can receive input information before channel-wise modeling.

Different from recent work that focus on enhancing spatial encoding, we use SrSEBlock to model correlations between channels. In this section, we will describe how the SrSEBlock work in our network.

In details, feature maps are input into a SELayer as Figure 3 shows. The corresponding excitations to each channel are output to scale original feature map. Taking a feature maps U in size of W×H×C as input, we first do a global average pooling to generate channel-wise statistics z in size of 1×1×C., as show in below

In order to learn nonlinear interaction between each channels, we use two FC layers with non-linear activations to form a bottleneck, as done in He et al. [5]. This architecture could limit model complexity and benefit for generalization. The reduction ratio r at 16 is accepted to do dimensionality reduction. The final output s of SELayer is use to scale corresponding channels of residual feature mappings.

In this way, noise information in previous feature mappings could be reduced. And channels that contain useful information will be highly activated, helping to boost feature’s discriminative abilities. In the later ablation experiment, we will show its effectiveness.

In our experiment settings, given a set of HR images {Yi} and the corresponding down-sampled LR images {Xi} through bicubic, our goal is to minimize the Charbonnier Penalty Function [2] defined as below, which is a differentiable variant of L1 norm

The loss is minimized using stochastic gradient descent with the standard backpropagation. We solve:

4.1 Datasets for Training and Testing

Different from previous work, we use DIV2K [1] to train our model for more realistic modeling. DIV2K is a newly distributed high quality image dataset for image super resolution. Its training data has 800 high definition, high resolution images. In our experiments, we find different image processing framework will produce different bicubic downscale results. So for fair comparison, we all use the bicubic downsampling algorithm in Matlab image processing tool to generate LR-HR image pairs for our network training. For each pair, we crop HR sub image in 96×96 size and downscale it to LR images by different downscale factors. We export the pairs as MAT variable in HDF5 type.

Three scaling cases { 2×,4×,8× } are considered. On each case, the architecture of feature extraction part of our network is kept the same, and the transposed convolutional layer size is changed according to different up-scale rate. The source code of our method is available on GitHub111source code: https://github.com/MKFMIKU/SrSENet.

We use 8 SrSEBlocks to do feature extraction. For each upscale deconvolution layer, we use respective convolutional kernels [4,2,1], [8,4,2], [16,8,4] for 2x, 4x, 8x rate up-scaled super-resolution image respectively. Here in the format [∗,∗,∗]

, the first represents kernel size, the second represents stride steps, and the last is padding size in transposed layer. If dealing with odd multiples of magnification, we can also easily achieve an odd magnification by modifying the kernel size of the convolutional network to an odd number(e.g., [3,*,*]). During the training, we set the initial learning rate at

0.0001. We use Adma optimizer [10] with β1=0.9 to let network convergence and the training batches is 64. It roughly takes half day on a machine using four TitanX GPUs for a single upscale training. For illustration, the respective PSNR testing curves of our SrSENet on Set14 are shown in Figure 4.

The quantitative performance comparisons are shown in Table 1. From the experiment results, we can easily find that our proposed method obtains competitive performance in all datasets in different upscale rates. Especially in larger scale case, the advantages of our method are more obvious. Our method can achieve top performance with less network depth. In Figure 5, we further show some realistic results for visual comparison. We can find that the fine texture of images in our method are recovered better.

In order to verify the effectiveness of the introduced SEblock, we additionally have set up an ablation experiment. We construct a reduced version network by removing SElayers out of the proposed SrSENet, while keeping other parts remained. We have compared the reduced version with our SrSENet. The performance comparisons on 4× scale are shown in Table 2. From the results, we can easily find that the introduced SEblocks indeed plays great importance on final excellence performance. On the other scales, we could achieve similar conclusions as well. We owe the its effectiveness to it introducing channel-wise attention mechanism, which makes channel information of each pixel on SR image adaptively learnable.

In this paper, we have proposed a new effective super-resolution model by using a deep residual network with SrSEBlock. Our method focuses on modeling channels correlations between feature mappings from the LR image. By modeling channel wise, we have confirmed that our method could produce more realistic texture on realistic images. We set a new state-of-the-art super-resolution method without increasing the complexities of the network. We believe that our approach can be applied to other real-world computer vision problems and achieve competitive results.