We prove a Bernstein-type bound for the difference between the average of negative log-likelihoods of independent discrete random variables and the Shannon entropy, both defined on a countably infinite alphabet. The result holds for the class of discrete random variables with tails lighter than or on the same order of a discrete power-law distribution. Most commonly-used discrete distributions such as the Poisson distribution, the negative binomial distribution, and the power-law distribution itself belong to this class. The bound is effective in the sense that we provide a method to compute the constants in it. 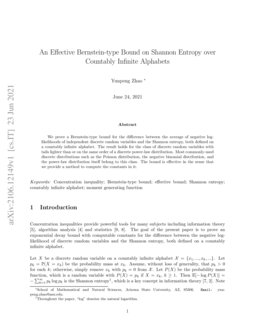 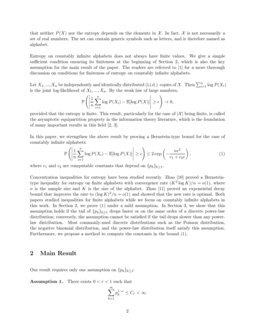 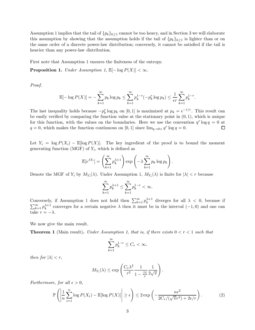 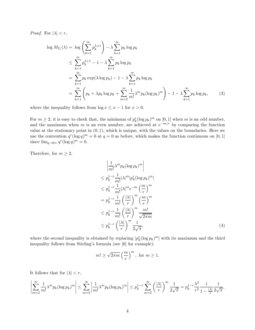 An entropy functional bounded from above by one

Negative numbers are essential in mathematics. They are not needed to de...
Ming-Xing Luo, et al. ∙

Suppose that you have n colours and m mutually independent dice, each of...
Christos Pelekis, et al. ∙

Concentration inequalities provide powerful tools for many subjects including information theory [5], algorithm analysis [4] and statistics [9, 8]. The goal of the present paper is to prove an exponential decay bound with computable constants for the difference between the negative log-likelihood of discrete random variables and the Shannon entropy, both defined on a countably infinite alphabet.

be the probability mass at

xk. Assume, without loss of generality, that pk>0 for each k; otherwise, simply remove xk with pk=0 from X. Let P(X) be the probability mass function, which is a random variable with P(X)=pk if X=xk, k≥1. Then E[−logP(X)]=−∑∞k=1pklogpk is the Shannon entropy111Throughout the paper, “log” denotes the natural logarithm., which is a key concept in information theory [7, 2]. Note that neither P(X) nor the entropy depends on the elements in X. In fact, X is not necessarily a set of real numbers. The set can contain generic symbols such as letters, and is therefore named as alphabet.

Entropy on countably infinite alphabets does not always have finite values. We give a simple sufficient condition ensuring its finiteness at the beginning of Section 2, which is also the key assumption for the main result of the paper. The readers are referred to [1] for a more thorough discussion on conditions for finiteness of entropy on countably infinite alphabets.

Let X1,...,Xn be independently and identically distributed (i.i.d.) copies of X. Then ∑ni=1logP(Xi) is the joint log-likelihood of X1,...,Xn

. By the weak law of large numbers,

provided that the entropy is finite. This result, particularly for the case of |X| being finite, is called the asymptotic equipartition property in the information theory literature, which is the foundation of many important results in this field [2, 3].

In this paper, we strengthen the above result by proving a Bernstein-type bound for the case of countably infinite alphabets:

where c1 and c2 are computable constants that depend on {pk}k≥1.

Concentration inequalities for entropy have been studied recently. Zhao [10] proved a Bernstein-type inequality for entropy on finite alphabets with convergence rate (K2logK)/n=o(1), where n is the sample size and K is the size of the alphabet. Zhao [11] proved an exponential decay bound that improves the rate to (logK)2/n=o(1) and showed that the new rate is optimal. Both papers studied inequalities for finite alphabets while we focus on countably infinite alphabets in this work. In Section 2, we prove (1) under a mild assumption. In Section 3, we show that this assumption holds if the tail of {pk}k≥1 drops faster or on the same order of a discrete power-law distribution; conversely, the assumption cannot be satisfied if the tail drops slower than any power-law distribution. Most commonly-used discrete distributions such as the Poisson distribution, the negative binomial distribution, and the power-law distribution itself satisfy this assumption. Furthermore, we propose a method to compute the constants in the bound (1).

Our result requires only one assumption on {pk}k≥1:

Assumption 1. There exists 0<r<1 such that

First note that Assumption 1 ensures the finiteness of the entropy.

The last inequality holds because −prklogpk on [0,1] is maximized at pk=e−1/r. This result can be easily verified by comparing the function value at the stationary point in (0,1), which is unique for this function, with the values on the boundaries. Here we use the convention qrlogq=0 at q=0, which makes the function continuous on [0,1] since limq→0+qrlogq=0. ∎

. The key ingredient of the proof is to bound the moment generating function (MGF) of

Yi, which is defined as

Denote the MGF of Yi by MYi(λ). Under Assumption 1, MYi(λ) is finite for |λ|<r because

Conversely, if Assumption 1 does not hold then ∑∞k=1pλ+1k diverges for all λ<0, because if ∑∞k=1pλ+1k converges for a certain negative λ then it must be in the interval (−1,0) and one can take r=−λ.

We now give the main result.

Under Assumption 1, that is, if there exists 0<r<1 such that

Furthermore, for all ϵ>0,

where the inequality follows from logx≤x−1 for x>0.

is an odd number, and the maximum when

m is an even number, are achieved at e−m/r by comparing the function value at the stationary point in (0,1), which is unique, with the values on the boundaries. Here we use the convention qr(logq)m=0 at q=0 as before, which makes the function continuous on [0,1] since limq→0+qr(logq)m=0.

where the second inequality is obtained by replacing |prk(logpk)m| with its maximum and the third inequality follows from Stirling’s formula (see [6] for example):

Since the three terms under ∑∞k=1 in (3) all converge absolutely for |λ|<r, one can take the sum term by term. Therefore, for |λ|<r,

The second part of the theorem follows from a standard argument using the Chernoff bound, which can be found in Chapter 2 of [9]. We give the details for completeness. For t>0 and 0<λ<r,

where the first inequality is Markov’s inequality and the second inequality follows from (5). By setting

The left tail bound can be obtained similarly by setting λ=−tnCr/(√πr2)+t/r. Therefore,

If there exists 0<r<1 such that

Furthermore, for all ϵ>0,

The proof is the same as of Theorem 1.

3 Determining the Constants in the Bound

The radius of convergence r in (4) and the upper bound Cr for ∑∞k=1p1−rk are the only constants to be determined if one wants to use (2) as an effective upper bound for a given distribution {pk}k≥1.

We first determine the types of distributions and the range of r that can make ∑∞k=1p1−rk converge. Intuitively speaking, for distributions that satisfy Assumption 1, the tail of {pk}k≥1 cannot be too heavy. We make the above statement precise in the following theorem.

which contradicts the assumption since 1/(1−r)>1. ∎

Remark. It may be surprising, at first glance, to get an exponential decay bound for a power-law distribution, which itself is heavy-tailed. But note that (2) is a concentration bound for logP(X), not for X. The log-likelihood logP(X) is typically better-behaved than X that takes values on non-negative integers and follows a heavy-tailed distribution. For example, for a power-law distribution with 1<α≤2, E[X]=∞; on the contrary, the entropy E[−logP(X)] is finite by Proposition 1 and Theorem 2 (ii). This phenomenon can be explained by noticing that −log(k−α) grows much slower than k. Moreover, the MGF of X is infinite if X follows a power-law distribution while the MGF of logP(X) is finite. The tail of logP(X) is not heavy in this sense, which makes (2) possible.

Finally, we discuss how to compute Cr after r is selected by Theorem 2. In practice, one can compute the partial sum of ∑∞k=1p1−rk until the increment is negligible. The value obtained in this way, however, is a lower bound for ∑∞k=1p1−rk and a generic truncation error bound does not exist for positive infinite series because in principle, the tail behavior cannot be predicted by a finite number of terms222This issue is minor in practice especially when pk drops exponentially. The series ∑∞k=1p1−rk usually converges very fast in this case. It is nothing wrong to take the partial sum until the increment is negligible. The method in Theorem 3 is useful to someone who needs a rigorous upper bound..

If the tail of {pk}k≥1 is dominated by a power-law distribution, we propose a method that can compute an upper bound for ∑∞k=1p1−rk at any tolerance level. Specifically, the next theorem shows how to compute an upper bound Cr for ∑∞k=1p1−rk with |∑∞k=1p1−rk−Cr| smaller than a pre-specified tolerance level if we find k0 such that pk≤c0k−α for k>k0. Note that such k0 exists if {pk}k≥1 satisfies the condition in (i) or (ii) in Theorem 2.

where ⌈⋅⌉ means rounding up to the next integer. Then

We only need to bound the tail probability for k>k1.

This research was supported by the National Science Foundation grant DMS-1840203.