The results from most machine learning experiments are used for a specific purpose and then discarded. This results in a significant loss of information and requires rerunning experiments to compare learning algorithms. This also requires implementation of another algorithm for comparison, that may not always be correctly implemented. By storing the results from previous experiments, machine learning algorithms can be compared easily and the knowledge gained from them can be used to improve their performance. The purpose of this work is to provide easy access to previous experimental results for learning and comparison. These stored results are comprehensive -- storing the prediction for each test instance as well as the learning algorithm, hyperparameters, and training set that were used. Previous results are particularly important for meta-learning, which, in a broad sense, is the process of learning from previous machine learning results such that the learning process is improved. While other experiment databases do exist, one of our focuses is on easy access to the data. We provide meta-learning data sets that are ready to be downloaded for meta-learning experiments. In addition, queries to the underlying database can be made if specific information is desired. We also differ from previous experiment databases in that our databases is designed at the instance level, where an instance is an example in a data set. We store the predictions of a learning algorithm trained on a specific training set for each instance in the test set. Data set level information can then be obtained by aggregating the results from the instances. The instance level information can be used for many tasks such as determining the diversity of a classifier or algorithmically determining the optimal subset of training instances for a learning algorithm. 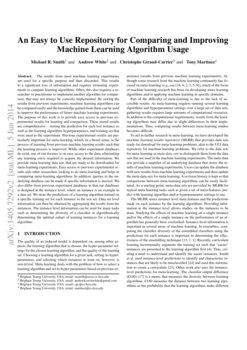 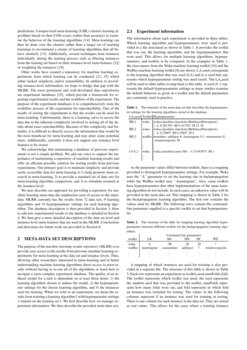 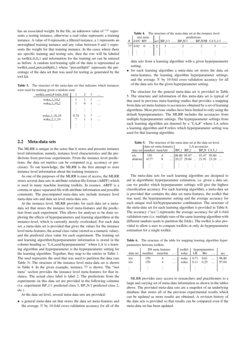 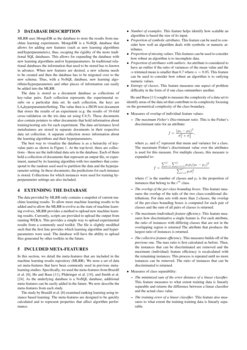 The success of machine learning on a given task dependson, among other t...
Michael R. Smith, et al. ∙

A contrastive rule for meta-learning

k-nearest neighbour (kNN) is one of the most prominent, simple and basic...
Muhammad Asim, et al. ∙

In this paper, the problem of data pre-storing and routing in dynamic, r...
Ye Hu, et al. ∙

Part of the difficulty of meta-learning is due to the lack of accessible results. As meta-learning requires running several learning algorithms and hyperparameter settings over a large set of data sets, gathering results requires large amounts of computational resources. In addition to the computational requirements, results from the learning algorithms may differ due to slight differences in their implementations. Thus, comparing results between meta-learning studies becomes difficult.

The MLRR stores instance level meta features and the predictions made on each instance by the learning algorithms. Providing information at the instance level allows studies on the instances to be done. Studying the effects of machine learning on a single instance and/or the effects of a single instance on the performance of an algorithm has generally been overlooked. Instance-level information is important in several areas of machine learning. In ensembles, computing the classifier diversity of the ensembled classifiers using the predictions for each instance is important in determining the effectiveness of the ensembling technique [13, 7, 1]. Recently, curriculum learning incrementally augments the training set such that “easier” instances are presented to the learning algorithm first [4]. Thus, creating a need to understand and identify the easier instances. Smith et al. used instance-level predictions to identify and characterize instances that are likely to be misclassified [24] and used this information to create a curriculum [23]. Other work also uses the instance-level predictions for meta-learning. The classifier output difference (COD) [17]

[14]. Meta-learning can then be done over the clusters rather than a larger set of learning learnings to recommend a cluster of learning algorithms that all behave similarly [15]. Additionally, several techniques treat instances individually during the training process such as filtering instances from the training set based on their instance-level meta-features [22] or weighting the instances [19].

Other works have created a repository for machine learning experiments from which learning can be conducted [21, 25] which either lacked simplicity and/or extensibility. In addition to providing instance-level information, we hope to bridge that gap with the MLRR. The most prominent and well-developed data repositories are experiment databases [25], which provide a framework for reporting experimental results and the workflow of the experiment. The purpose of the experiment databases is to comprehensively store the workflow process of the experiment for reproducibility. One of the results of storing the experiments is that the results can be used for meta-learning. Unfortunately, there is a learning curve to access the data due to the inherent complexity involved in storing all of the details about exact reproducibility. Because of this complexity and formality, it is difficult to directly access the information that would be the most beneficial for meta-learning and may deter some potential users. Additionally, currently it does not support any instance level features to be stored.

We acknowledge that maintaining a database of previous experiments is not a simple problem. We add our voice to support the importance of maintaining a repository of machine learning results and offer an efficient possible solution for storing results from previous experiments. Our primary goal is to maintain simplicity and provide easily accessible data for meta-learning to 1) help promote more research in meta-learning, 2) to provide a standard set of data sets for meta-learning algorithm comparison, and 3) to stimulate research at the instance-level.

We next describe our approach for providing a repository for machine learning meta-data the emphasizes ease of access to the meta-data. MLRR currently has the results from 72 data sets, 9 learning algorithms and 10 hyperparameter settings for each learning algorithm. The database description is then provided in Section 3. How to add new experimental results to the database is detailed in Section 4. We then give a more detailed description of the data set level and instance level meta-features that are used in the MLRR. Conclusions and directions for future work are provided in Section 6.

As the parameter values differ between toolkits, there is a mapping provided to distinguish hyperparameter settings. For example, Weka uses the “-L” parameter to set the learning rate in backpropagation while the Waffles toolkit uses “-learningrate”. Also, some toolkits have hyperparameters that other implementations of the same learning algorithm do not include. In such cases, an unknown value will be provided in the meta-data set. This mapping is shown in Table

2 for the backpropagation learning algorithm. The first row contains the values used by MLRR. The following rows contain the command-line parameter supplied to a specific toolkit to set that hyperparameter.

At the data set level, several meta-data sets are provided:

6. The accuracy (“acc”) represents the average accuracy for all k-fold validation runs (i.e. multiple runs of the same learning algorithm with different random seeds to partition the folds). The toolkit is also provided to allow a user to compare toolkits or only do hyperparameter estimation for a single toolkit.

MLRR provides easy access to researchers and practitioners to a large and varying set of meta-data information as shown in the tables above. The provided meta-data sets are a snapshot of an underlying database that stores all of the previous experimental results which can be updated as more results are obtained. A revision history of the data sets is provided so that results can be compared even if the meta-data set has been updated.

The data is stored as a document database as collections of key-value pairs. Each collection represents the experimental results on a particular data set. In each collection, the keys are LA_hyperparameterSetting. The value then is a JSON text document that stores the results of an experiment (e.g. the results of 10-fold cross-validation on the iris data set using C4.5). These documents also contain pointers to other documents that hold information about training/testing sets for each experiment. The data set/instance level metafeatures are stored in separate documents in their respective data set collection. A separate collection stores information about the learning algorithms and their hyperparameters.

The best way to visualize the database is as a heirarchy of key-value pairs as shown in Figure 1. At the top-level, there are collections - these are the individual data sets in the database. Each of them hold a collection of documents that represent an output file, or experiment, named by its learning algorithm with two numbers that correspond to the random seed used to partition the data and the hyperparameter setting. In these documents, the predictions for each instance is stored. Collections for which instances were used for training hyperparameter settings are also included.

The study by Brazdil et al. [6] examined ranking learning using instance based learning. The meta-features are designed to be quickly calculated and to represent properties that affect algorithm performance.

Multi-class modifications are made according to the implementation of the data complexity library (DCoL) [16].

Pfahringer et al. [18] introduced the notion of using performance values (i.e. accuracy) of simple and fast classification algorithms as meta-features. The landmarkers that are included in the MLRR are listed below.

The use of landmarkers have been shown to be competitive with the best performing meta-features with a significant decrease in computational effort [20].

In this paper, we presented the machine learning results repository (MLRR) an easily accessible and extensible database for meta-learning. MLRR was designed with the main goals of providing an easily accessible data repository to facilitate meta-learning and providing benchmark meta-data sets to compare meta-learning experiments. To this end, the MLRR provides ready to download meta-data sets of previous experimental results. MLRR is unique in that it also provides meta-data at the instance level. Of course, the results could also be used as a means of comparing one’s work with prior work as they are stored in the MLRR. The MLRR can be accessed at http://axon.cs.byu.edu/mlrr.

The MLRR allows for reproducible results as the data sets are stored on the server and as the class names and toolkits are provided. The experiment DB is a lot more rigid in its design as it is based on relational databases and PMML (predictive model markup language), thus, requiring a learning curve to import and extract data. The MLRR is less rigid in its design allowing for easier access to the data and more extensibility, with the trade-off of less formality.

One direction for future work is to integrate the API provided at openml111www.openml.org (an implementation of an experiment database) to incorporate their results with those that are in the MLRR. This will help provide easy access to the results that are already stored in openml without having to incur the learning cost associated with understanding the database schema. Another open problem is how to store information about how a data set is preprocessed. Currently, the MLRR can store the instance level information resulting from preprocessing, but it lacks a mechanism to store the preprocessing process. Integrating this information in an efficient way is a direction of current research.