Recent years have witnessed the emergence and increasing popularity of 3D medical imaging techniques with the development of 3D sensors and technology. However, achieving geometric invariance in the processing of 3D medical images is computationally expensive but nonetheless essential due to the presence of possible errors caused by rigid registration techniques. An alternative way to analyze medical imaging is by understanding the 3D shapes represented in terms of point-cloud. Though in the medical imaging community, 3D point-cloud processing is not a "go-to" choice, it is a canonical way to preserve rotation invariance. Unfortunately, due to the presence of discrete topology, one can not use the standard convolution operator on point-cloud. To the best of our knowledge, the existing ways to do "convolution" can not preserve the rotation invariance without explicit data augmentation. Therefore, we propose a rotation invariant convolution operator by inducing topology from hypersphere. Experimental validation has been performed on publicly available OASIS dataset in terms of classification accuracy between subjects with (without) dementia, demonstrating the usefulness of our proposed method in terms of model complexity, classification accuracy, and last but most important invariance to rotations. 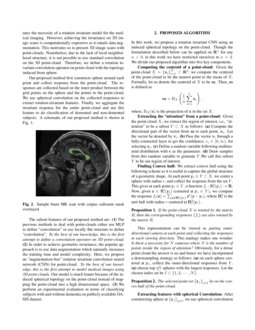 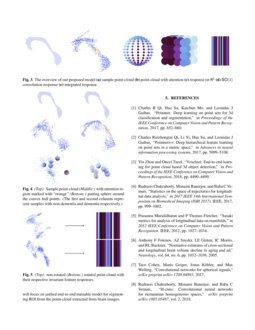 Since the dawn of medical image analysis, researchers have been using 3D imaging to capture structure of the brain. Throughout the last decade, this community has seen the emergence of deep learning due to its power to capture the local structure. One of the major challenges to deal with medical images is the misalignment in the collection of data. Although this can be addressed by image registration, yet the registration techniques incur error which propagates to the subsequent analysis. A way to address this issue is by making the model invariant to the geometric transformations, which entails data augmentation with an increase in model complexity and training time. This leads to the voyage of exploring alternatives of 3D structure representation. Point-cloud is an efficient way to represent 3D structures

[1, 2] because of its important geometric properties. Due to the lack of a smooth topology, standard convolution can not be applied on point-cloud. One of the popular approaches to do point convolution [3]

is to divide the point-cloud into voxels and then extract some features using 3D convolution. However, this method suffers from the possible sparsity of point-clouds which results in multiple empty voxels. One possible solution is to use multi-layer perceptron (MLP) to extract features from each point

[1] or from a local neighborhood around each point [2]. Unfortunately, all these methods are susceptible to random rotations which makes them incapable to efficiently deal with the error caused by rigid registration. In this work, we try to address this problem by developing an inherently rotation invariant model.

In recent years, several researchers [4, 5] have proposed methods to do discrimination between subjects with and without dementia. Some of the popular approaches include using the 3D volume of the region of interest (ROI) and analyzing the shape of the anatomical structures of interest. In order to do that, the researchers either proposed techniques to map the 3D volume in high dimensional space [4] or mapped the shape of the anatomical structure on the complex projective space, i.e., Kendall’s shape space [5].

Motivation: In medical imaging, the analysis is highly sensitive to the error caused by the rigid registration due to the presence of large rotations in collection of data. This dictates the necessity of a rotation invariant model for the medical imaging. However, achieving the invariance on 3D image scans is computationally expensive as it entails data augmentation. This motivates us to present 3D image scans with point-clouds. Nonetheless, due to the lack of local neighborhood structure, it is not possible to use standard convolution on the 3D point-cloud. Therefore, we define a rotation invariant convolution operator on point-cloud with the topology induced from sphere.

Our proposed method first constructs sphere around each point and collect response from the point-cloud. The responses are collected based on the inner product between the grid points on the sphere and the points in the point-cloud. We use spherical convolution on the collected responses to extract rotation-invariant features. Finally, we aggregate the invariant response for the entire point-cloud and use this feature to do classification of demented and non-demented subjects. A schematic of our proposed method is shown in Fig. 1.

In order to achieve geometric invariance, the popular approach is to use data augmentation which naturally increases the training time and model complexity. Here, we propose an “augmentation-free” rotation invariant convolution neural network (CNN) for point-cloud.

To the best of our knowledge, this is the first attempt to model medical images using 3D point clouds. Our model is much leaner because of the induced spherical topology on the point-cloud instead of mapping the point-cloud into a high dimensional space. (3)

We perform an experimental evaluation in terms of classifying subjects with and without dementia on publicly available OASIS dataset.

In this work, we propose a rotation invariant CNN using an induced spherical topology on the point-cloud. Though the formulation described below can be applied on Rn for any n>0, in this work we have restricted ourselves to n=3. We divide our proposed algorithm into five key components.

where, ΠX(x) is the projection of x in the set X.

Extracting the “attention” from a point-cloud: Given the point-cloud X, we extract the region of interest, i.e., “attention” to be a subset Y⊂X as follows: (a)

Compute the directional part of the vector from

m to each point, xi. Let the vector be denoted by vi. (b) Pass the vector vi through a fully-connected layer to get the confidence, ci∈[0,∞), for selecting xi. (c)

c as the parameter. (d) Draw samples from this random variable to generate Y. We call this subset Y to be our region of interest.

Finding Convex hull: We extract convex hull using the following scheme as it is useful to capture the global structure of a geometric shape. At each point yi∈Y⊂X, we center a sphere with radius r, and collect the response from the set Y. This gives at each point yi∈Y, a function fi:S2r(yi)→R. Now, given z∈S2r(yi) (centered at yi∈Y), we compute the response fi(z)=∑y∉B2r(yi)zt(y−yi), where B2r is the unit ball with radius r centered at B2r(yi).

This representation can be viewed as putting omni-directional camera at each point and collecting the responses in each viewing direction. This analogy makes one wonder: Is there a necessity for N cameras where N is the number of points inside the region of attention? Obviously, for a dense point-cloud the answer is no and hence we have incorporated a downsampling strategy as follows: (a) on each sphere centered at yi, collect the omni-directional responses from Y. (a) choose top η% spheres with the largest responses. Let the chosen index set be I⊂{1,2,⋯,N}.

The selected point set {yj}j∈I lie on the convex hull of the point-cloud.

As the output of spherical convolution is a function from SO(3) to R, we need SO(3) convolution in order to develop a deep CNN architecture. We use the standard group convolution with respect to the Haar measure, which we define as follows.

Given f:SO(3)→R (the signal) and w:SO(3)→R (the learnable kernel), we define the convolution operator f⋆w:SO(3)→R as (f⋆w)(g)=∫SO(3)f(h)w(g−1h)ω(h). Here, ω is the volume density on SO(3) with respect to the Haar measure. As obvious from the definition of group convolution this is equivariant to the action of SO(3).

convolutions. In between convolutions, we use ReLU and batchnorm operations. After these convolution layers, the output is equivariant to rotations, i.e., if

We use an invariant layer after the convolution layers to compute the integrated response over SO(3). The purpose of this invariant layer is to make the entire network invariant to rotations.

In the next section, we will give the data description and the experimental details.

Below, we provide the experimental details involving choice of hyperparameters, data augmentation scheme and ablation study.

Parameter selection: The dataset consists of 928 points in each point-cloud. We select 8 points on the convex hull sampled from the region of interest. We use Adam optimizer with batch size 4 and learning rate 0.005. We use a spherical CNN model with one S2 and one SO(3) convolution layer where input bandwidths are 4 and 2 and output bandwidths are 2 and 1 respectively. The number of output channels used are 8 and 16 respectively. The total number of parameters used in this model is 2201. In Fig. 4, we show a representative point-cloud from demented and non-demented subjects with the corresponding attention area and the convex hull points.

Point-cloud helps with understanding 3D geometric shapes for medical data. In this work, we propose an “augmentation-free” rotation invariant CNN for point-cloud, and apply it on public dataset OASIS for identifying corpus callosum shapes. The core of our method are the proposed rotation invariant convolution on point-cloud by inducing topology from sphere, and the usage of attention mechanism to focus on specific parts of 3D shapes. Our method achieved superior performance with comparatively lean model. In future, we will focus on unified end-to-end trainable model for segmenting ROI from the point-cloud extracted from brain images.