An Asymptotically Optimal Policy for Uniform Bandits of Unknown Support

Consider the problem of a controller sampling sequentially from a finite number of N ≥ 2 populations, specified by random variables X^i_k, i = 1,... , N, and k = 1, 2, ...; where X^i_k denotes the outcome from population i the k^th time it is sampled. It is assumed that for each fixed i, { X^i_k }_k ≥ 1 is a sequence of i.i.d. uniform random variables over some interval [a_i, b_i], with the support (i.e., a_i, b_i) unknown to the controller. The objective is to have a policy π for deciding, based on available data, from which of the N populations to sample from at any time n=1,2,... so as to maximize the expected sum of outcomes of n samples or equivalently to minimize the regret due to lack on information of the parameters { a_i } and { b_i }. In this paper, we present a simple inflated sample mean (ISM) type policy that is asymptotically optimal in the sense of its regret achieving the asymptotic lower bound of Burnetas and Katehakis (1996). Additionally, finite horizon regret bounds are given. 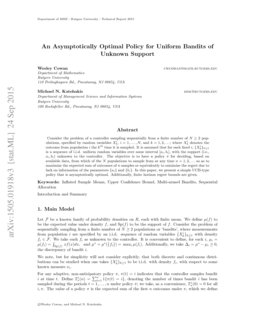 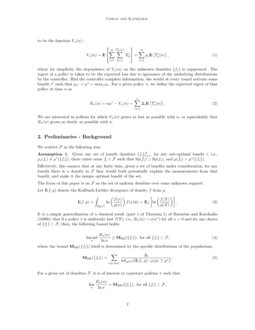 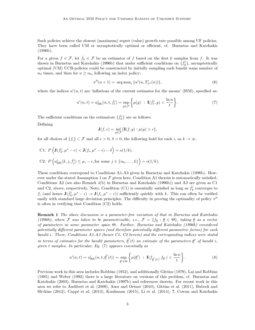 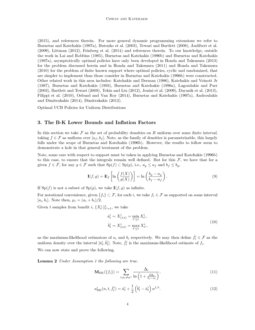 be a known family of probability densities on

\boldmathR, each with finite mean. We define μ(f) to be the expected value under density f, and Sp(f) to be the support of f. Consider the problem of sequentially sampling from a finite number of N≥2 populations or ‘bandits’, where measurements from population i are specified by an i.i.d. sequence of random variables {Xik}k≥1 with density fi∈F. We take each fi as unknown to the controller. It is convenient to define, for each i, μi=μ(fi)=∫Sp(f)xf(x)dx,   and μ∗=μ∗({fi})=maxiμ(fi). Additionally, we take Δi=μ∗−μi≥0, the discrepancy of bandit i.

We note, but for simplicity will not consider explicitly, that both discrete and continuous distributions can be studied when one takes {Xik}k≥1 to be i.i.d. with density fi, with respect to some known measure νi.

For any adaptive, non-anticipatory policy π, π(t)=i indicates that the controller samples bandit i at time t. Define Tiπ(n)=∑nt=1\boldmath1{π(t)=i}, denoting the number of times bandit i has been sampled during the periods t=1,…,n under policy π; we take, as a convenience, Tiπ(0)=0 for all i,π. The value of a policy π is the expected sum of the first n outcomes under π, which we define to be the function Vπ(n):

where for simplicity the dependence of Vπ(n) on the unknown densities {fi} is suppressed. The regret of a policy is taken to be the expected loss due to ignorance of the underlying distributions by the controller. Had the controller complete information, she would at every round activate some bandit i∗ such that μi∗=μ∗=maxiμi. For a given policy π, we define the expected regret of that policy at time n as

We restrict F in the following way:

Effectively, this ensures that at any finite time, given a set of bandits under consideration, for any bandit there is a density in F that would both potentially explain the measurements from that bandit, and make it the unique optimal bandit of the set.

The focus of this paper is on F as the set of uniform densities over some unknown support.

where the bound MBK({fi}) itself is determined by the specific distributions of the populations:

For a given set of densities F, it is of interest to construct policies π such that

Such policies achieve the slowest (maximum) regret (value) growth rate possible among UF policies. They have been called UM or asymptotically optimal or efficient, cf. Burnetas and Katehakis (1996b).

be an estimator of

f based on the first k samples from f. It was shown in Burnetas and Katehakis (1996b) that under sufficient conditions on {^fik}, asymptotically optimal (UM) UCB-policies could be constructed by initially sampling each bandit some number of n0 times, and then for n≥n0, following an index policy:

where the indices ui(n,t) are ‘inflations of the current estimates for the means’ (ISM), specified as:

The sufficient conditions on the estimators {^fik} are as follows:

These conditions correspond to Conditions A1-A3 given in Burnetas and Katehakis (1996b). However under the stated Assumption 1 on F given here, Condition A1 therein is automatically satisfied. Conditions A2 (see also Remark 4(b) in Burnetas and Katehakis (1996b)) and A3 are given as C1 and C2, above, respectively. Note, Condition (C1) is essentially satisfied as long as ^fik converges to fi (and hence J(^fik,μ∗−ϵ)→J(fi,μ∗−ϵ)) sufficiently quickly with k. This can often be verified easily with standard large deviation principles. The difficulty in proving the optimality of policy π0 is often in verifying that Condition (C2) holds.

The above discussion is a parameter-free variation of that in Burnetas and Katehakis (1996b), where F was taken to be parametrizable, i.e., F={fθ–:θ–∈Θ}, taking θ–

as a vector of parameters in some parameter space

Θ. Further, Burnetas and Katehakis (1996b) considered potentially different parameter spaces (and therefore potentially different parametric forms) for each bandit i. There, Conditions A1-A3 (hence C1, C2 herein) and the corresponding indices were stated in terms of estimates for the bandit parameters, ^θ––i(t) an estimate of the parameters θ–i of bandit i, given t samples. In particular, Eq. (7) appears essentially as

In this section we take F as the set of probability densities on \boldmathR uniform over some finite interval, taking f∈F as uniform over [af,bf]. Note, as the family of densities is parametrizable, this largely falls under the scope of Burnetas and Katehakis (1996b). However, the results to follow seem to demonstrate a hole in that general treatment of the problem.

Note, some care with respect to support must be taken in applying Burnetas and Katehakis (1996b) to this case, to ensure that the integrals remain well defined. But for this F, we have that for a given f∈F, for any g∈F such that Sp(f)⊂Sp(g), i.e., ag≤af and bf≤bg,

For notational convenience, given {fi}⊂F, for each i, we take fi∈F as supported on some interval [ai,bi]. Note then, μi=(ai+bi)/2.

We can now state and prove the following.

Under Assumption 1 the following are true.

We are interested in policies π such that limnRπ(n)/lnn achieves the lower bound indicated above, for every choice of {fi}⊂F. Following the prescription of Burnetas and Katehakis (1996b), i.e. Eq. (12), would lead to the following policy,

It is easy to demonstrate that the estimators ^θ–i(t)=(^ait,^bit) converge sufficiently quickly to (ai,bi) in probability that Condition (C1) above is satisfied for ^fit. Proving that Condition (C2) is satisfied, however, is much much more difficult, and in fact we conjecture that (C2) does not hold for policy πBK. While this does not indicate that that πBK fails to achieve asymptotic optimality, it does imply that the standard techniques are insufficient to verify it. However, asymptotic optimality may provably be achieved by an (seemingly) negligible modification, via the following policy.

5 Simulation Comparisons of the πCK Sampling

, asymptotically optimal policy for the case in which the population outcomes distributions are normal with unknown means and unknown variances. Specifically, given

These graphs clearly illustrate the benefit of using the optimal policy.

PhD student Daniel Pirutinsky did the simulation work underlying Figures 1 and 2. Support for this project was provided by the National Science Foundation (NSF grant CMMI-14-50743).

Here we may make use of the following bounds, that for x≥0, q>0,

Applying these to the above,

which, rounding up, completes the result.

[Proof of Proposition 5.2] Let A(Q,ϵ) denote the RHS of the above, B(Q,ϵ) denote the left. We adopt the physicists’ convention of denoting the partial derivative of F with respect to x as Fx.

Note, A(Q,0)≤B(Q,0). Hence, it suffices to demonstrate that Aϵ≤Bϵ over this range or, since they are both positive,

The above inequality holds when δ=1. Taking C(δ,Q) as the above simplified ratio, it suffices to show that Cδ≥0. Simplifying this inequality and canceling the positive factors, it is equivalent to show that −2Qδ+(2+Qδ)ln(1+Qδ)≥0, or taking x=Qδ>0,

This is a fairly standard and easily verified inequality for ln. This completes the proof.