An approximate Bayesian approach to regression estimation with many auxiliary variables

Model-assisted estimation with complex survey data is an important practical problem in survey sampling. When there are many auxiliary variables, selecting significant variables associated with the study variable would be necessary to achieve efficient estimation of population parameters of interest. In this paper, we formulate a regularized regression estimator in the framework of Bayesian inference using the penalty function as the shrinkage prior for model selection. The proposed Bayesian approach enables us to get not only efficient point estimates but also reasonable credible intervals for population means. Results from two limited simulation studies are presented to facilitate comparison with existing frequentist methods. 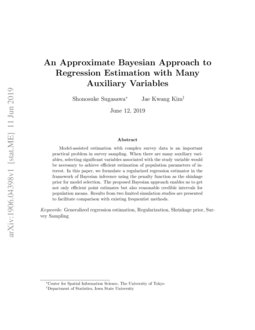 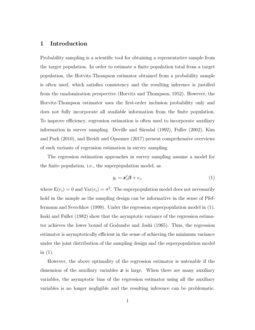 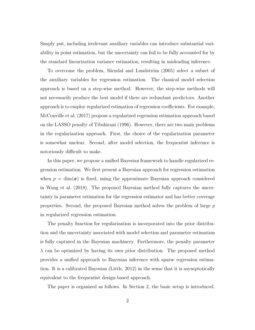 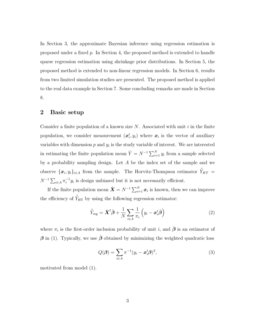 Probability sampling is a scientific tool for obtaining a representative sample from the target population. In order to estimate a finite population total from a target population, the Hotvitz-Thompson estimator obtained from a probability sample is often used, which satisfies consistency and the resulting inference is justified from the randomization perspective (Horvitz and Thompson, 1952). However, the Horvitz-Thompson estimator uses the first-order inclusion probability only and does not fully incorporate all available information from the finite population. To improve efficiency, regression estimation is often used to incorporate auxiliary information in survey sampling. Deville and Särndal (1992), Fuller (2002), Kim and Park (2010), and Breidt and Opsomer (2017) present comprehensive overviews of such variants of regression estimation in survey sampling.

The regression estimation approaches in survey sampling assume a model for the finite population, i.e., the superpopulation model, as

. Thus, the regression estimator is asymptotically efficient in the sense of achieving the minimum variance under the joint distribution of the sampling design and the superpopulation model in (

To overcome the problem, Särndal and Lundström (2005) select a subset of the auxiliary variables for regression estimation. The classical model selection approach is based on a step-wise method. However, the step-wise methods will not necessarily produce the best model if there are redundant predictors. Another approach is to employ regularized estimation of regression coefficients. For example, McConville et al. (2017) propose a regularized regression estimation approach based on the LASSO penalty of Tibshirani (1996). However, there are two main problems in the regularization approach. First, the choice of the regularization parameter is somewhat unclear. Second, after model selection, the frequentist inference is notoriously difficult to make.

The penalty function for regularization is incorporated into the prior distribution and the uncertainty associated with model selection and parameter estimation is fully captured in the Bayesian machinery. Furthermore, the penalty parameter λ can be optimized by having its own prior distribution. The proposed method provides a unified approach to Bayesian inference with sparse regression estimation. It is a calibrated Bayesian (Little, 2012) in the sense that it is asymptotically equivalent to the frequentist design-based approach.

The paper is organized as follows. In Section 2, the basic setup is introduced. In Section 3, the approximate Bayesian inference using regression estimation is proposed under a fixed p

is the vector of auxiliary variables with dimension

p and yi is the study variable of interest. We are interested in estimating the finite population mean ¯Y=N−1∑Ni=1yi from a sample selected by a probability sampling design. Let A be the index set of the sample and we observe {\boldmathxi,yi}i∈A from the sample. The Horvitz-Thompson estimator ^¯YHT=N−1∑i∈Aπ−1iyi is design unbiased but it is not necessarily efficient.

If the finite population mean ¯\boldmathX=N−1∑Ni=1\boldmathxi is known, then we can improve the efficiency of ^¯YHT by using the following regression estimator:

where πi is the first-order inclusion probability of unit i, and ^\boldmathβ is an estimator of β in (1). Typically, we use ^\boldmathβ obtained by minimizing the weighted quadratic loss

To derive the asymptotic properties of ^¯Yreg, we may use

and, if p=o(n1/2) then we can safely ignore the effect of estimating \boldmathβ∗ in the regression estimator. See Appendix A for a sketch proof of (5).

If, on the other hand, the dimension p is large, then we cannot ignore the effect of estimating \boldmathβ∗. In this case, we can consider using some variable selection idea to reduce the dimension of X. For variable selection, we may employ techniques of regularized estimation of regression coefficients. The regularization method can be described as finding

Statistical inference with the regularized regression estimator in (7) is not fully investigated in the literature. For example, Chen et al. (2018) consider the regularized regression estimator using adaptive LASSO of Zou (2006), but they assume the sampling design is non-informative and the uncertainty in model selection is not fully incorporated in their inference. Generally speaking, making frequentist inference after model selection is difficult. The approximated Bayesian method we propose in this paper will capture the full uncertainty in the Bayesian framework.

Developing a design-based Bayesian inference under complex sampling is a challenging problem in statistics. Wang et al. (2018) propose the so-called approximate Bayesian method for design-based inference using asymptotic normality of a design-consistent estimator. Specifically, for a given parameter θ with a prior distribution π(θ), if one can find a design-consistent estimator ^θ of θ, then the approximate posterior distribution of θ is given by

where f(^θ∣θ) is the sampling distribution of ^θ

, which is often approximated by a normal distribution.

Drawing on this idea, one can develop an approximate Bayesian approach to capture the full uncertainty in the regression estimator. Let

be the design-consistent estimator of β and ^\boldmathVβ be the corresponding asymptotic variance-covariance matrix of ^\boldmathβ, given by

where ^ei=yi−\boldmathxti^\boldmathβ, Δij=πij−πiπj and πij is the joint inclusion probability of unit i and j. Under some regularity conditions, as discussed in Chapter 2 of Fuller (2009), we can establish

Thus, using (8) and (10), we can obtain the approximate posterior distribution of β as

where ϕp denotes a p-dimensional multivariate normal density and π(\boldmathβ) is a prior distribution for β.

Now, we wish to find the posterior distribution of ¯Y for a given β. First, define

is a design unbiased estimator of

¯Y, regardless of β. Under some regularity conditions, we can show that ^¯Yreg(\boldmathβ) follows a normal distribution asymptotically. Thus, we obtain

Therefore, combining (11) and (14), the approximate posterior distribution of ¯Y can be obtained as

Generating posterior samples from (15) can be easily carried out via the following two steps:

Based on the approximate posterior samples of ¯Y, we can compute posterior mean as a point estimator as well as credible intervals for uncertainty quantification for ¯Y including the variability in estimating β.

If an intercept term is included in xi, that is, atxi=1,  ∀i∈{1,⋯,N}, for some a, then we have ¯Y=¯Xt\boldmathβ and the parameter ¯Y is completely determined from β. In this case, the posterior distribution in (15) reduces to

The following theorem presents an asymptotic property of the proposed approximate Bayesian method.

Under the regularity conditions described in the Appendix, conditional on the full sample data,

is a special case of the Bernstein-von Mises theorem

(van der Vaart, 2000, Section 10.2) in survey regression estimation, and its proof is given in the Appendix. According to Theorem 1, the credible interval for ¯Y constructed from the approximated posterior distribution (15

We now consider the case when there are many auxiliary variables in applying regression estimation. When p

is large, it is important to select suitable auxiliary variables that are associated with the response variable to present irrelevant covariates from rendering the resulting estimator inefficient. To this end, we assume that the regression model in (

1) contains an intercept term. That is,

where β0 is an intercept term.

Among the several choices of shrinkage priors, we specifically consider two priors for \boldmathβ1: Laplace (Park and Casella, 2008) and horseshoe (Carvalho et al., 2009, 2010). The Laplace prior is given by πλ(\boldmathβ1)∝exp(−λ∑pk=1|βk|)

, which is related to Lasso regression

(Tibshirani, 1996), so that the proposed approximated Bayesian method can be seen as the Bayesian version of a survey regression estimator with Lasso (McConville et al., 2017). The horseshoe prior is a more advanced shrinkage prior with the form:

where ϕ(⋅;a,b) denotes the normal density function with mean a and variance b. It is known that the horseshoe prior enjoys more severe shrinkage for the zero elements of \boldmathβ1 than the Laplace prior, thus allowing strong signals to remain large (Carvalho et al., 2009).

Let ^\boldmathVβ be the asymptotic variance-covariance matrix of (^β0,^\boldmathβt1). Then, under the flat prior for β0, the approximate posterior distribution of \boldmathβ=(β0,\boldmathβt1) can be defined as

The marginal posterior of \boldmathβ1 is given by

Thus, we can generate posterior samples of β0 and \boldmathβ1 from (19

Therefore, the approximate posterior distribution of ¯Y can be obtained as

where ^\boldmathβ=(^β0,^\boldmathβt1)t. Generating posterior samples from (21) can be easily carried out via the following two steps:

By the frequent approach, λ is often called the tuning parameter and can be selected via a data-dependent procedure such as cross validation as used in McConville et al. (2017)

. On the other hand, in the Bayesian approach, we assign a prior distribution on the hyperparameter parameter

λ and consider integration with respect to the posterior distribution of λ, which means that uncertainty of the hyperparameter estimation can be taken into account. Specifically, we assign a gamma prior for λ2 as the Laplace prior and a half-Cauchy prior for λ as the horseshoe prior (18). They both lead to familiar forms of full conditional posterior distributions of λ or λ2. The details are given in the Appendix.

As in Section 3, we obtain the following asymptotic properties of the proposed approximate Bayesian method.

Under the regularity conditions described in the Appendix, conditional on the full sample data,

Theorem 2 ensures that the proposed approximate Bayesian method is asymptotically equivalent to the frequentist version in which \boldmathβ1 is estimated by the regularized method with penalty corresponding to the shrinkage prior used in the Bayesian method. Moreover, the proposed Bayesian method can be extended to cases using general non-linear regression, as demonstrated in the next section.

5 An Extension to non-linear models

The proposed Bayesian methods can be readily extended to work with non-linear regression. Some extensions of the regression estimator to nonlinear models are also considered in Wu and Sitter (2001), Breidt et al. (2005), and Montanari and Ranalli (2005).

We consider a general working model for yi as E(yi∣\boldmathxi)=m(\boldmathxi;%\boldmath$β$)=mi and Var(yi∣\boldmathxi)=σ2a(mi) for some known functions m(⋅;⋅) and a(⋅). The model-assisted regression estimator for ¯Y with β known is then

and its design-consistent variance estimator is obtained by

which gives the approximate conditional posterior distribution of ¯Y given β. That is, similarly to (14), we can obtain

Under some regularity conditions, we can establish the asymptotic normality of ^\boldmathβ. That is,

Thus, the posterior distribution of β given ^\boldmathβ can be obtained by

This formula enables us to define the approximate posterior distribution of β of the form (11), so that the approximate Bayesian inference for ¯Y can be carried out in the same way as in the linear regression case. Note that Theorem 1 still holds under the general setup as long as the regularity conditions given in the Appendix are satisfied.

and apply the logistic regression model for the non-linear regression estimation.

In the first simulation, we generate xi=(xi1,…,xip∗)t, i=1,…,N, from a multivariate normal distribution with mean vector (1,…,1)t and variance-covariance matrix 2R(0.2), where p∗=50 and the (i,j)-th element of R(ρ) is ρ|i−j|. The response variables Yi are generated from the following linear regression model:

For the simulated dataset, we apply the proposed approximate Bayesian methods with the uniform prior π(\boldmathβ1)∝1, Laplace prior and horseshoe prior (18) for \boldmathβ1, which are denoted by AB, ABL and ABH, respectively. For all the Bayesian methods, we use π(¯Y)∝1. We generate 5,000 posterior samples of ¯Y after discarding the first 500 samples and compute the posterior mean of ¯Y as the point estimate. As for the frequentist methods, we apply the original generalized regression estimator without variable selection (GREG) as well as the GREG method with Lasso regularization (GREG-L; McConville et al., 2017) and ridge estimation of \boldmathβ1 (GREG-R; Rao and Singh, 1997). We also apply the Horwitz-Thompson (HT) estimator as a benchmark for efficiency comparison. In GREG-L, the tuning parameter is selected via 10-fold cross validation, and we use the gamma prior Ga(λ2∗,1) for λ2 in ABL, where λ∗