A common goal in many research areas is to reconstruct an unknown signal x from noisy linear measurements. Approximate message passing (AMP) is a class of low-complexity algorithms for efficiently solving such high-dimensional regression tasks. Often, it is the case that side information (SI) is available during reconstruction. For this reason a novel algorithmic framework that incorporates SI into AMP, referred to as approximate message passing with side information (AMP-SI), has been recently introduced. An attractive feature of AMP is that when the elements of the signal are exchangeable, the entries of the measurement matrix are independent and identically distributed (i.i.d.) Gaussian, and the denoiser applies the same non-linearity at each entry, the performance of AMP can be predicted accurately by a scalar iteration referred to as state evolution (SE). However, the AMP-SI framework uses different entry-wise scalar denoisers, based on the entry-wise level of the SI, and therefore is not supported by the standard AMP theory. In this work, we provide rigorous performance guarantees for AMP-SI when the input signal and SI are drawn i.i.d. according to some joint distribution subject to finite moment constraints. Moreover, we provide numerical examples to support the theory which demonstrate empirically that the SE can predict the AMP-SI mean square error accurately. 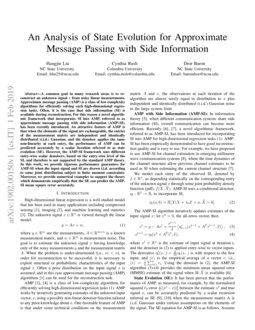 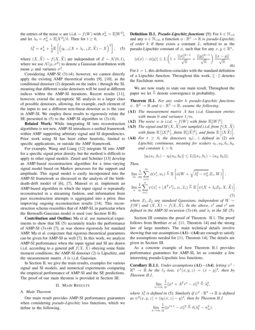 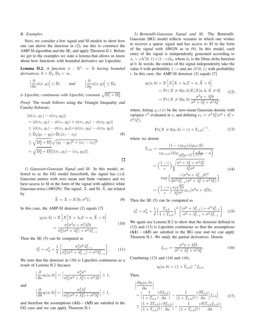 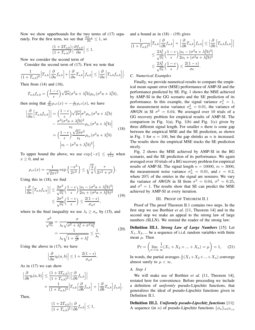 A common goal in many research areas is to reconstruct an unknown signal...
Hangjin Liu, et al. ∙

We consider the linear regression problem, where the goal is to recover ...
Phil Schniter, et al. ∙

An Approximate Message Passing Framework for Side Information

, and machine learning and statistics

[3]. The unknown signal x∈Rn is viewed through the linear model:

is measurement noise. The goal is to estimate the unknown signal

x having knowledge only of the noisy measurements y and the measurement matrix A. When the problem is under-determined (i.e., m<n), in order for reconstruction to be successful, it is necessary to exploit structural or probabilistic characteristics of the input signal x. Often a prior distribution on the input signal x is assumed, and in this case approximate message passing (AMP) algorithms[1] can be used for the reconstruction task.

AMP [1, 4] is a class of low-complexity algorithms for efficiently solving high-dimensional regression tasks (1

x, using a possibly non-linear denoiser function tailored to any prior knowledge about x. One favorable feature of AMP is that under some technical conditions on the measurement matrix A and x, the observations at each iteration of the algorithm are almost surely equal in distribution to x plus independent and identically distributed (i.i.d.) Gaussian noise in the large system limit.

AMP with Side Information (AMP-SI): In information theory [5], when different communication systems share side information (SI), overall communication can become more efficient. Recently [6, 7], a novel algorithmic framework, referred to as AMP-SI, has been introduced for incorporating SI into AMP for high-dimensional regression tasks (1). AMP-SI has been empirically demonstrated to have good reconstruction quality and is easy to use. For example, we have proposed to use AMP-SI for channel estimation in emerging millimeter wave communication systems [8], where the time dynamics of the channel structure allow previous channel estimates to be used as SI when estimating the current channel structure [7].

We model each entry of the observed SI, denoted by ˜x∈Rn, as depending statistically on the corresponding entry of the unknown signal x

where xt∈Rn is the estimate of input signal at iteration t, and the denoiser in (2) is applied entry-wise to vector inputs. The derivative η′t(s,.)=∂∂sηt(s,.) is with respect to the first input, and ⟨v⟩ is the empirical average of a vector v, i.e., ⟨v⟩=1n∑ni=1vi. Using the denoiser in (2), the AMP-SI algorithm (3)-(4) provides the minimum mean squared error (MMSE) estimate of the signal when SI ˜X is available [6].

State Evolution (SE): It has been proven that the performance of AMP, as measured, for example, by the normalized squared ℓ2-error 1n||xt−x||22 between the estimate xt and true signal x, can be accurately predicted by a scalar recursion referred as SE[9, 10] when the measurement matrix A is i.i.d. Gaussian under various assumptions on the elements of the signal. The SE equation for AMP-SI is as follows. Assume the entries of the noise w are i.i.d. ∼f(W) with σ2w=E[W2], and let λ0=σ2w+E[X2]/δ. Then for t≥0,

to denote a Gaussian distribution with mean

Considering AMP-SI (3)-(4), however, we cannot directly apply the existing AMP theoretical results [9, 10], as the conditional denoiser (2) depends on the index i through the SI, meaning that different scalar denoisers will be used at different indices within the AMP-SI iterations. Recent results [11], however, extend the asymptotic SE analysis to a larger class of possible denoisers, allowing, for example, each element of the input to use a different non-linear denoiser as is the case in AMP-SI. We employ these results to rigorously relate the SE presented in (5) to the AMP-SI algorithm in (3)-(4).

While integrating SI into reconstruction algorithms is not new, AMP-SI introduces a unified framework within AMP supporting arbitrary signal and SI dependencies. Prior work using SI has been either heuristic, limited to specific applications, or outside the AMP framework.

For example, Wang and Liang [12] integrate SI into AMP for a specific signal prior density, but the method is difficult to apply to other signal models. Ziniel and Schniter [13] develop an AMP-based reconstruction algorithm for a time-varying signal model based on Markov processes for the support and amplitude. This signal model is easily incorporated into the AMP-SI framework as discussed in the analysis of the birth-death-drift model of [6, 7]. Manoel et al. implement an AMP-based algorithm in which the input signal is repeatedly reconstructed in a streaming fashion, and information from past reconstruction attempts is aggregated into a prior, thus improving ongoing reconstruction results [14]. This reconstruction scheme resembles that of AMP-SI, in particular when the Bernoulli-Gaussian model is used (see Section II-B).

Contribution and Outline: Ma et al. use numerical experiments to show that SE (5) accurately tracks the performance of AMP-SI (3)-(4) [7], as was shown rigorously for standard AMP. Ma et al. conjecture that rigorous theoretical guarantees can be given for AMP-SI as well [7]. In this work, we analyze AMP-SI performance when the input signal and SI are drawn i.i.d. according to a general pdf f(X,˜X) obeying some finite moment conditions, the AMP-SI denoiser (2) is Lipschitz, and the measurement matrix A is i.i.d. Gaussian.

In Section II, we give the main results, examples for various signal and SI models, and numerical experiments comparing the empirical performance of AMP-SI and the SE predictions. The proof of our main theorem is provided in Section III.

Our main result provides AMP-SI performance guarantees when considering pseudo-Lipschitzloss functions, which we define in the following.

For k=1, this definition coincides with the standard definition of a Lipschitz function. Throughout this work, ||⋅|| denotes the Euclidean norm.

We are now ready to state our main result. Throughout the paper we let p= denote convergence in probability.

and the strong law of large numbers. The main technical details involve showing that our assumptions

(A1)−(A4) are enough to satisfy the assumptions needed for [11, Theorem 14]. The details are given in Section III.

As a concrete example of how Theorem II.1 provides performance guarantees for AMP-SI, let us consider a few interesting pseudo-Lipschitz loss functions.

Next, we consider a few signal and SI models to show how one can derive the denoiser in (2), use this to construct the AMP-SI algorithm and the SE, and apply Theorem II.1. Before we get to the examples we state a lemma that allows us know about how functions with bounded derivative are Lipschitz.

The result follows using the Triangle Inequality and Cauchy-Schwarz,

In this model, referred to as the GG model henceforth, the signal has i.i.d. Gaussian entries with zero mean and finite variance and we have access to SI in the form of the signal with additive white Gaussian noise (AWGN). The signal, X, and SI, ˜X, are related by

Then the SE (5) can be computed as

We note that the denoiser in (10) is Lipschitz continuous as a result of Lemma II.2 because

and therefore the assumptions (A1)−(A5) are satisfied in the GG case and we can apply Thoerem II.1.

where, letting ρτ2(x) be the zero-mean Gaussian density with variance τ2 evaluated at x, and defining νt:=σ2λ2t(σ2+λ2t+σ2λ2t),

Then the SE (5) can be computed as

We again use Lemma II.2 to show that the denoiser defined in (12) and (13) is Lipschitz continuous so that the assumptions (A1)−(A5) are satisfied in the BG case and we can apply Thoerem II.1. We study the partial derivatives. Denote

Now we show upperbounds for the two terms of (17) separately. For the first term, we see that ∂fa,b∂a≤1, so

Now we consider the second term of

Consider the second term of (17). First we note that

where in the final inequality we use λt≥σw by (15), and

Finally, we provide numerical results to compare the empirical mean square error (MSE) performance of AMP-SI and the performance predicted by SE. Fig. 1 shows the MSE achieved by AMP-SI in the GG scenario and the SE prediction of its performance. In this example, the signal variance σ2x=1, the measurement noise variance σ2w=0.01, the variance of AWGN in SI σ2=0.04. We averaged over 10 trials of a GG recovery problem for empirical results of AMP-SI. The comparison in Fig. 1(a), Fig. 1(b) and Fig. 1(c) given by three different signal length. For smaller n there is some gap between the empirical MSE and the SE prediction, as shown in Fig. 1 for n=100, but the gap shrinks as n is increased. The results show the empirical MSE tracks the SE prediction nicely.

Fig. 2 shows the MSE achieved by AMP-SI in the BG scenario, and the SE prediction of its performance. We again averaged over 10 trials of a BG recovery problem for empirical results of AMP-SI. The signal length n=10000, m=3000, the measurement noise variance σ2w=0.01, and ϵ=0.2, where 20% of the entries in the signal are nonzero. We vary the variance of AWGN in SI from σ2=0.04, σ2=0.25, and σ2=1. The results show that SE can predict the MSE achieved by AMP-SI at every iteration.

Proof of The proof Theorem II.1 contains two steps. In the first step we use Berthier et al. [11, Theorem 14] and in the second step we make an appeal to the strong law of large numbers (SLLN). We remind the reader of the strong law:

be a sequence of i.i.d. random variables with finite mean

Now we demonstrate that our assumptions (A1)−(A4) stated in Section II are enough to satisfy the assumptions (C1)−(C6) needed to apply Theorem III.1.

The Lipschitz constant does not depend on n, so ˜ηtn(⋅) is uniformly Lipschitz.

Now consider assumption (C4). From (A2), the measurement noise w in (1) has i.i.d. entries with zero-mean and finite E[|W|k]. Then applying Definition III.1,

Therefore letting a2=b2=0 we have

Now using (22) and the triangle inequality,

Then using the triangle inequality,