An Analysis of Attention Mechanisms: The Case of Word Sense Disambiguation in Neural Machine Translation 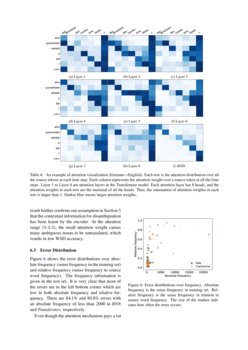 Human languages exhibit many different types of ambiguity. Lexical ambiguity refers to the fact that words can have more than one semantic meaning. Dealing with these lexical ambiguities is a challenge for various NLP tasks. Word sense disambiguation (WSD) is recognizing the correct meaning of an ambiguous word, with the help of contextual information.

rios2017improving find that attentional NMT models perform well in translating ambiguous words with frequent senses,222More than 2,000 instances in the training set. while liu2017handling show that there are plenty of incorrect translations of ambiguous words. In Section 4, we evaluate the translations of ambiguous nouns, using the test set from rios2017improving. In this setting, we expect to get a more accurate picture of the WSD performance of NMT models.

In Section 6, we first compare the two different attention mechanisms. Then, we explore the relation between accuracy and attention distributions when translating ambiguous nouns. In the end, we investigate the error distributions over frequency.

Our main findings are summarized as follows:

ContraWSD as the test set.

In NMT, the encoder may encode contextual information into the hidden states. marvin2018exploring explore the ability of hidden states at different encoder layers in WSD, while we focus on exploring the attention mechanisms that connect the encoder and the decoder.

We use h to represent the hidden state set {h1,h2,⋯,hn} in the encoder, where n is the number of source-side tokens. Then ct is computed by Equation 1:

where αt is the attention vector at time step t. αt

h and the decoder state st−1, as described by Equation 2:

There are different score() functions to compute the attention vector at

ContraWSD is extracted from a large amount of balanced parallel text. It contains 84 different German word senses. It has 7,200 German→English lexical ambiguities and each lexical ambiguity instance has 3.5 contrastive translations on average. All the ambiguous words are nouns so that the WSD is not simply based on syntactic context.

In addition to the filtered

nouns, the translations of the ambiguous nouns are classified into six groups, depending on which class (references, incorrect senses, no translation) the translations at aligned/unaligned positions belong to, as described in Table

All the models are trained with 2 GPUs. During training, each mini-batch contains 4096 tokens. A model checkpoint is saved every 4,000 updates. We use Adam Kingma and Ba (2015)

as the optimizer. The initial learning rate is set to 0.0002. If the performance on the validation set has not improved for 8 checkpoints, the learning rate is multiplied by 0.7. We set the early stopping patience to 32 checkpoints. All the neural networks have 8 layers. For

We use the training data from the WMT17 shared task.666http://www.statmt.org/wmt17/translation-task.html We choose newstest2013 as the validation set, and use newstest2014 and newstest2017 as the test sets. All the BLEU scores are measured by SacreBLEU. There are about 5.9 million sentence pairs in the training set after preprocessing with Moses scripts. We learn a joint BPE model with 32,000 subword units Sennrich et al. (2016). There are 6,330 sentences left after filtering the sentences with segmented ambiguous nouns. We employ the models that have the best perplexity on the validation set for the evaluation.

ghader2017what show that there are different attention patterns for words of different part-of-speech (POS) tags, which sheds light on interpreting attention mechanisms. In this section, we investigate the attention distributions over source-side ambiguous nouns.

The NMT models we evaluated are trained at subword-level. When we compute the attention distributions, we only consider the ambiguous nouns that are not segmented into subwords. To some extent, we therefore conduct an analysis of frequent tokens. We employ the alignment learnt by fast-align to find the step of translating the current source token.

As for Transformer attention mechanisms, there are multiple layers, and each layer has multiple heads. We maximize the attention weights in different heads to represent the attention distribution matrix for each attention layer.101010

We first compute wambi, wnouns, and wtokens for each attention layer. Then we average these weights.

We first give our analysis of the two different attention mechanisms based on the attention distributions and visualizations. Then, we explore the relation between translation accuracy and attention weight over the ambiguous nouns. In the end, we provide the error distributions over frequency.

demonstrates the attention distributions of different models when translating ambiguous nouns. For the vanilla attention mechanism in the RNN model, most of the attention weights are relatively uniformly distributed in

‘Stelle’ is an ambiguous noun, whose reference translations are ‘job/position/work’. ‘Stelle’ also has other translations such as ‘location/spot/site’. The context tokens ‘garantiert’ (guarantee) and ‘Leuten’ (people) contribute to disambiguating ‘Stelle’. However, the RNN model could translate ‘Stelle’ correctly but only pays a little attention to ‘Leuten’.

The question how NMT models learn to represent word senses and similar phenomena has implications for transfer learning, the diagnosis of translation errors, and for the design of architectures for MT, including architectures that scale up the context window to the level of documents. We hope that future work will continue to deepen our understanding of the internal workings of NMT models.

We thank all the anonymous reviews who give a lot of valuable and insightful comments. Gongbo Tang is funded by the Chinese Scholarship Council (grant number 201607110016).