In this paper, an energy harvesting scheme for a multi-user multiple-input-multiple-output (MIMO) secrecy channel with artificial noise (AN) transmission is investigated. Joint optimization of the transmit beamforming matrix, the AN covariance matrix, and the power splitting ratio is conducted to minimize the transmit power under the target secrecy rate, the total transmit power, and the harvested energy constraints. The original problem is shown to be non-convex, which is tackled by a two-layer decomposition approach. The inner layer problem is solved through semi-definite relaxation, and the outer problem is shown to be a single-variable optimization that can be solved by one-dimensional (1-D) line search. To reduce computational complexity, a sequential parametric convex approximation (SPCA) method is proposed to find a near-optimal solution. Furthermore, tightness of the relaxation for the 1-D search method is validated by showing that the optimal solution of the relaxed problem is rank-one. Simulation results demonstrate that the proposed SPCA method achieves the same performance as the scheme based on 1-D search method but with much lower complexity. 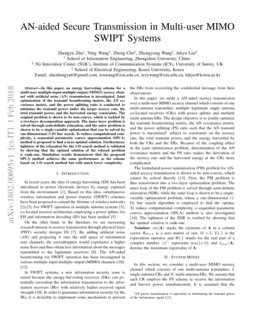 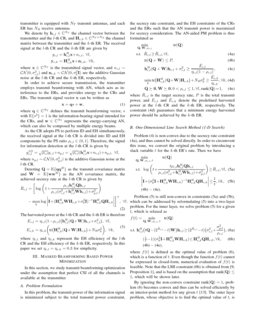 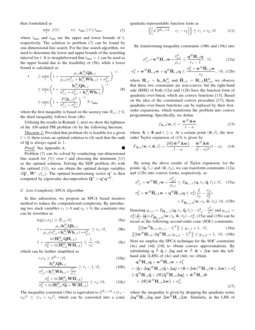 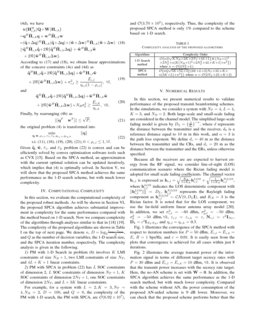 It is known that circularly symmetric Gaussian signals are the optimal i...
Christoph Hellings, et al. ∙

This paper investigates a new model to improve the scalability of low-po...
The Khai Nguyen, et al. ∙

In recent years, the idea of energy harvesting (EH) has been introduced to power electronic devices by energy captured from the environment. [1]. Based on this idea, simultaneous wireless information and power transfer (SWIPT) schemes have been proposed to extend the lifetime of wireless networks [2]-[5]. For SWIPT operation in multiple antenna systems [3], co-located receiver architecture employing a power splitter for EH and information decoding (ID) has been studied [5].

On the other hand, in the literature we see increasing research interest in secrecy transmission through physical layer (PHY) security designs [6] [7]. By adding artificial noise (AN) and projecting it onto the null space of information user channels, the eavesdroppers would experience a higher noise floor and thus obtain less information about the messages transmitted to the legitimate receivers [8]. The AN-aided beamforming for SWIPT operation has been investigated in various multiple-input multiple-output (MIMO) channels [10]-[12].

In this paper, we study a AN-aided secrecy transmission over a multi-user MIMO secrecy channel which consists of one multi-antenna transmitter, multiple legitimate single antenna co-located receivers (CRs) with power splitter and multiple multi-antenna ERs. The design objective is to jointly optimize the transmit beamforming matrix, the AN covariance matrix, and the power splitting (PS) ratio such that the AN transmit power is maximized111AN power maximization is equivalent to minimizing the transmit power of the information signal [11]. subject to constraints on the secrecy rate, the total transmit power, and the energy harvested by both the CRs and the ERs. Because of the coupling effect in the joint optimization problem, determination of the AN covariance matrix and the PS ratio makes the derivation of the secrecy rate and the harvested energy at the CRs more complicated.

The formulated power minimization (PM) problem for AN-aided secrecy transmission is shown to be non-convex, which cannot be solved directly [13]. First, the PM problem is thus transformed into a two-layer optimization problem. The inner loop of the PM problem is solved through semi-definite relaxation (SDR), while the outer loop is shown to be a single-variable optimization problem, where a one-dimensional (1-D) line search algorithm is employed to find the optima. To reduce computational complexity, a sequential parametric convex approximation (SPCA) method is also investigated [16]. The tightness of the SDR is verified by showing that the optimal solution is rank-one.

Notation: \emphvec({A}) stacks the elements of A

in a column vector.

is a zero matrix of size

denotes the maximum eigenvalue of

In this section, we consider a multi-user MIMO secrecy channel which consists of one multi-antenna transmitter, L single-antenna CRs and K multi-antenna ERs. We assume that each CR employs the PS scheme to receive the information and harvest power simultaneously. It is assumed that the transmitter is equipped with NT transmit antennas, and each ER has NR receive antennas.

where x∈CNT is the transmitted signal vector, and nc,l∼CN(0,σ2c,l) and ne,k∼CN(0,σ2kI) are the additive Gaussian noise at the l-th CR and the k-th ER, respectively.

In order to achieve secure transmission, the transmitter employs transmit beamforming with AN, which acts as interference to the ERs, and provides energy to the CRs and ERs. The transmit signal vector x can be written as

where q∈CNT defines the transmit beamforming vector, s with E{s2}=1 is the information-bearing signal intended for the CRs, and w∈CNT represents the energy-carrying AN, which can also be composed by multiple energy beams.

where np,l∼CN(0,σ2p,l) is the additive Gaussian noise at the l-th CR.

In this section, we study transmit beamforming optimization under the assumption that perfect CSI of all the channels is available at the transmitter.

where ¯Rc,l is the target secrecy rate, P is the total transmit power, and ¯Ec,l and ¯Ee,k denote the predefined harvested power at the l-th CR and the k-th ER, respectively. The constraint (4e) guarantees that a minimum energy harvested power should be achieved by the k-th ER.

Problem (4) is non-convex due to the secrecy rate constraint (4e), and thus cannot be solved directly. In order to circumvent this issue, we convert the original problem by introducing a slack variable t for the k-th ER’s rate. Then we have

Problem (5) is still non-convex in constraints (5a) and (5b), which can be addressed by reformulating (5) into a two-layer problem. For the inner layer, we solve problem (5) for a given t, which is relaxed as

where f(t) is defined as the optimal value of problem (6), which is a function of t. Even though the function f(t) cannot be expressed in closed-form, numerical evaluation of f(t) is feasible. Note that the LMI constraint (6b) is obtained from [9, Proposition 1], and is based on the assumption that rank(Q)≤1, which will be shown later.

By ignoring the non-convex constraint rank(Q)=1, problem (6) becomes convex and thus can be solved efficiently by an interior-point method for any given t [13]. The outer layer problem, whose objective is to find the optimal value of t, is then formulated as

where tmax and tmin are the upper and lower bounds of t, respectively. The solution to problem (7) can be found by one-dimensional line search. For the line search algorithm, we need to determine the lower and upper bounds of the searching interval for t. It is straightforward that tmax=1 can be used as the upper bound due to the feasibility of (5b), while a lower bound is calculated as

where the first inequality is based on the secrecy rate ¯Rc,l≥0, the third inequality follows from (4e).

Utilizing the results in Remark 1, next we show the tightness of the AN-aided PM problem (4) by the following theorem.

Theorem 1: Provided that problem (6) is feasible for a given t>0, there exists an optimal solution to (4) such that the rank of Q is always equal to 1.

Problem (7) can be solved by conducting one-dimensional line search for f(t) over t and choosing the minimum f(t) as the optimal solution. Solving the SDP problem (6) with the optimal f(t), we can obtain the optimal design variables (Q∗,W∗,ρ∗c,l). The optimal beamforming vector q∗ is then computed by eigenvalue decomposition Q∗=q∗q∗H.

In this subsection, we propose an SPCA based iterative method to reduce the computational complexity. By introducing two slack variables r1>0 and r2>0, the constraint (4e) can be rewritten as

which can be further simplified as

The inequality constraint (10a) is equivalent to 2¯Rc,l+2+(r1−r2)2≤(r1+r2)2, which can be converted into a conic quadratic-representable function form as

By transforming inequality constraints (10b) and (10c) into

where Hc,l=hc,lhHc,l and ^He,k=He,kHHe,k, we observe that these two constraints are non-convex, but the right-hand side (RHS) of both (12a) and (12b) have the function form of quadratic-over-linear, which are convex functions [13]. Based on the idea of the constrained convex procedure [17], these quadratic-over-linear functions can be replaced by their first-order expansions, which transforms the problem into convex programming. Specifically, we define

By using the above results of Taylor expansion, for the points (~q,~r1) and (~w,~r2), we can transform constraints (12a) and (12b) into convex forms, respectively, as

Next we employ the SPCA technique for the SOC constraints (4e) and (4e) [18] to obtain convex approximations. By substituting q≜~q+Δq and w≜~w+Δw into the left-hand side (LHS) of (4e) and (4e), we obtain

where the inequality is given by dropping the quadratic terms ΔqHHc,lΔq and ΔwHHc,lΔw. Similarly, in the LHS of (4e), we have

Finally, by rearranging (4e) as

the original problem (4) is transformed into

Given ~q, ~w, ~r1, and ~r2, problem (22) is convex and can be efficiently solved by convex optimization software tools such as CVX [15]. Based on the SPCA method, an approximation with the current optimal solution can be updated iteratively, which implies that (4) is optimally solved. In Section V, we will show that the proposed SPCA method achieves the same performance as the 1-D search scheme, but with much lower complexity.

Because all the receivers are are expected to harvest energy from the RF signal, we consider line-of-sight (LOS) communication scenario where the Rician fading model is adopted for small scale fading coefficients. The channel vector hc,l is expressed as hc,l=√KR1+KRhLOSc,l+√11+KRhNLOSc,l, where hLOSc,l indicates the LOS deterministic component with ∥hLOSc,l∥22=DL, hNLOSc,l represents the Rayleigh fading component as hNLOSc,l∼CN(0,DLI), and KR=3 is the Rician factor. It is noted that for the LOS component, we use the far-field uniform linear antenna array model [20]. In addition, we set σ2c,l=−60 dBm, σ2p,l=−50 dBm, σ2k=−50 dBm,∀k, εc,l=εe,k=ε, Nc,l=ε2INT, Dk=ε2INTNR, and ηc,l=ηe,k= 0.3.

Fig. 1 illustrates the convergence of the SPCA method with respect to iteration numbers for P=50 dBm, ¯Ec,l=¯Ee,k=E, R=1 bps/Hz, and ε= 0.01. It is easily seen from the plots that convergence is achieved for all cases within just 8 iterations.

Fig. 2 illustrates the average transmit power of the information signal in terms of different target secrecy rates with P=30 dBm and ¯Ec,l=¯Ee,k=10 dBm, ∀k. It is observed that the transmit power increases with the secrecy rate target. Here, the no-AN scheme is set with W=0. In addition, the SPCA algorithm achieves the same performance as the 1-D search method, but with much lower complexity. Compared with the scheme without AN, the power consumption of the proposed AN-aided scheme is 9 dB lower. Moreover, we can check that the proposed scheme performs better than the scheme with ρc=ρc,l=0.5, and the performance gap becomes larger as the target secrecy rate increases. This indicates that optimizing the PS ratio ρc,l is important, especially when the target secrecy rate is high.

In this paper, we have proposed AN-aided secure transmission scheme in multi-user MIMO SWIPT Systems where power splitters are employed by the receivers for SWIPT operation. The original problem, which was shown to be non-convex, was relaxed to formulate a two-layer problem. The inner layer problem was recast as a sequence of SDPs. Then the optimal solution to the outer problem has been obtained through one-dimensional line search. Moreover, tightness of the relaxation scheme has been investigated by showing that the optimal solution is rank-one. To reduce the computational complexity, an SPCA based iterative algorithm has been proposed, which achieved near-optimal solution. Finally, numerical results have been provided to validate the performance of the proposed transmit beamforming schemes.

We first consider the Lagrange dual function of (6) as

Since problem (6) is convex and satisfies the Slater’s condition, the duality gap between (6) and (A) is zero, and the strong duality holds. Therefore solving problem (6) is equivalent to solving (A). In addition, the constraint 0<ρc,l≤1 can be satisfied as

Also the optimal variable ρ∗c,l, and the dual variables ξ∗l,μ∗l are related by