An Adaptive PID Autotuner for Multicopters with Experimental Results

This paper develops an adaptive PID autotuner for multicopters, and presents simulation and experimental results. The autotuner consists of adaptive digital control laws based on retrospective cost adaptive control implemented in the PX4 flight stack. A learning trajectory is used to optimize the autopilot during a single flight. The autotuned autopilot is then compared with the default PX4 autopilot by flying a test trajectory constructed using the second-order Hilbert curve. In order to investigate the sensitivity of the autotuner to the quadcopter dynamics, the mass of the quadcopter is varied, and the performance of the autotuned and default autopilot is compared. It is observed that the autotuned autopilot outperforms the default autopilot. 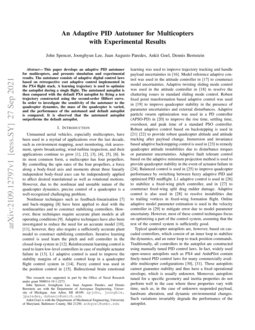 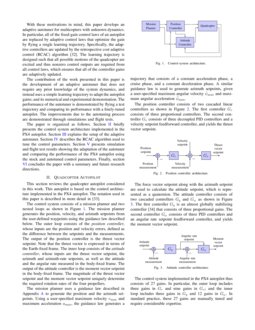 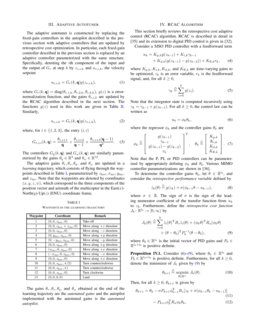 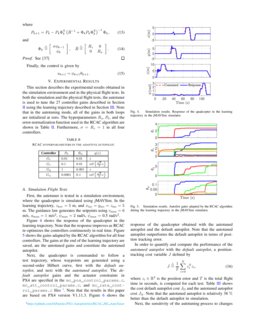 An Adaptive Digital Autopilot for Fixed-Wing Aircraft with Actuator Faults

In this short note, we investigate the feedback control of relativistic ...
Song Fang, et al. ∙

This paper presents a model based on an hybrid system to numerically sim...
Areski Hadjaz, et al. ∙

Adaptive Digital PID Control of a Quadcopter with Unknown Dynamics

A Morphing Quadrotor that Can Optimize Morphology for Transportation

Multirotors can be effectively applied to various tasks, such as transpo...
Chanyoung Kim, et al. ∙

Unmanned aerial vehicles, especially multicopters, have been used in a myriad of applications over the last decade, such as environment mapping, asset monitoring, risk assessment, sports broadcasting, wind-turbine inspection, and their applications continue to grow [7, 3, 2, 29, 30, 27]

. In its most common form, a multicopter has four propellers. By controlling the spin rates of the four propellers, a force along a body-fixed axis and moments about three linearly independent body-fixed axes can be independently applied to affect desired translational as well as rotational motions. However, due to the nonlinear and unstable nature of the quadcopter dynamics, precise control of a quadcopter is a well-recognized challenging problem.

Nonlinear techniques such as feedback-linearization [21] and back-stepping [12] have been applied to deal with the nonlinearities and to construct stabilizing controllers. However, these techniques require accurate plant models at all operating conditions [6]. Adaptive techniques have also been investigated to reduce the need for an accurate model [37, 11], however, they also require a sufficiently accurate plant model to construct stabilizing controllers. Iterative learning control is used learn the pitch and roll controller in the closed-loop system in [1]

. Reinforcement learning control is used to learn low-level controllers in case of multiple actuator failure in

to improve quadcopter stability in the presence of parameter uncertainties and external disturbances. Adaptive particle swarm optimization was used in a PD controller (APSO-PD) in

to resolve instabilities due to trailing vortices in fixed-wing formation flight. Online adaptive model parameter estimation is used in the velocity controller in

Typical quadcopter autopilots are, however, based on cascaded controllers, which consist of an inner loop to stabilize the dynamics, and an outer loop to track position commands. Traditionally, all controllers in the autopilot are constructed using manually tuned PID control laws. In fact, widely used open-source autopilots such as PX4 and ArduPilot contain finely-tuned PID control laws for many commercially available multicopter configurations

[23, 4]. These autopilots cannot guarantee stability and thus have a fixed operational envelope, which is usually unknown. Moreover, autopilots tuned for a specific geometry and inertia properties do not perform well in the case where these properties vary with time, such as, in the case of unknown suspended payload, hardware alteration, and dynamic environmental changes. Such variations invariably degrade the performance of the autopilot.

With these motivations in mind, this paper develops an adaptive autotuner for multicopters with unknown dynamics. In particular, all of the fixed-gain control laws of an autopilot are replaced by adaptive control laws that optimize the gain by flying a single learning trajectory. Specifically, the adaptive controllers are updated by the retrospective cost adaptive control (RCAC) algorithm [19]. The learning trajectory is designed such that all possible motions of the quadcopter are excited and thus nonzero control outputs are required from all control laws, which ensures that all of the controller gains are adaptively updated.

The contribution of the work presented in this paper is the development of an adaptive autotuner that does not require any prior knowledge of the system dynamics, and instead uses a simple learning trajectory to adapt the autopilot gains; and its numerical and experimental demonstration. The performance of the autotuner is demonstrated by flying a test trajectory and comparing its performance with a finely-tuned autopilot. The improvements due to the autotuning process are demonstrated through simulations and flight tests.

The paper is organized as follows. Section II briefly presents the control system architecture implemented in the PX4 autopilot. Section III explains the setup of the adaptive autotuner. Section IV describes the RCAC algorithm used to tune the control parameters. Section V presents simulation and flight test results showing the adaptation of the autotuner and comparing the performance of the PX4 autopilot using the stock and autotuned control parameters. Finally, section VI concludes the paper with a summary and future research directions.

This section reviews the quadcopter autopilot considered in this work. This autopilot is based on the control architecture implemented in the PX4 autopilot. The notation used in this paper is described in more detail in [14].

The adaptive autotuner is constructed by replacing the fixed-gain controllers in the autopilot described in the previous section with adaptive controllers that are updated by retrospective cost optimization. In particular, each fixed-gain controller described in the previous section is replaced by an adaptive controller parameterized with the same structure. Specifically, denoting the ith component of the input and the output of Gr at step k by zr,i,k and ur,i,k, the velocity setpoint

where Gr(k,{q})=diag(θr,1,k,θr,2,k,θr,3,k), g(z) is a error-normalization function, and the gains θr,i,k are updated by the RCAC algorithm described in the next section. The functions g(z) used in this work are given in Table II. Similarly,

The adaptive gains θr,θv,θq, and θω are updated in a learning trajectory, which consists of flying through the waypoints described in Table I, parameterized by zhov,xinc,yinc, and zinc. Note that the waypoints are denoted by coordinates (x,y,z,ψ), which correspond to the three components of the position vector and azimuth of the multicopter in the East(x)-North(y)-Up(z) (ENU) coordinate frame.

This section briefly reviews the retrospective cost adaptive control (RCAC) algorithm. RCAC is described in detail in [28] and its extension to digital PID control is given in [19].

Consider a SISO PID controller with a feedforward term

where Kp,k,Ki,k,Kd,k, and Kff,k are time-varying gains to be optimized, zk is an error variable, rk is the feedforward signal, and, for all k≥0,

Note that the integrator state is computed recursively using γk=γk−1+g(zk−1). For all k≥0, the control law can be written as

where the regressor ϕk and the controller gains θk are

Note that the P, PI, or PID controllers can be parameterized by appropriately defining ϕk and θk. Various MIMO controller parameterizations are shown in [13].

To determine the controller gains θk, let θ∈Rlθ, and consider the retrospective performance variable defined by

where σ∈R. The sign of σ is the sign of the leading numerator coefficient of the transfer function from uk to zk. Furthermore, define the retrospective cost function Jk:Rlθ→[0,∞) by

where θ0∈Rlθ is the initial vector of PID gains and P0∈Rlθ×lθ is positive definite.

Finally, the control is given by

. Note that in the autotuning mode, all of the gains in both loops are initialized at zero. The hyperparameters

Ru,P0, and the error-normalization function used in the RCAC algorithm are shown in Table II. Furthermore, σ=Rz=1 in all four controllers.

First, the autotuner is tested in a simulation environment, where the quadcopter is simulated using jMAVSim. In the learning trajectory, zhov=5 m, and xinc=yinc=zinc=5 m. The guidance law generates the setpoints using vmax=6 m/s, amax=1 m/s2, ˙ψmax=2 rad/s, ¨ψmax= 0.5 rad/s2.

Figure 4 shows the response of the quadcopter in the learning trajectory. Note that the response improves as RCAC re-optimizes the controllers continuously in real time. Figure 5 shows the gains adapted by the RCAC algorithm for all four controllers. The gains at the end of the learning trajectory are saved, are the autotuned gains and constitute the autotuned autopilot.

In order to quantify and compare the performance of the autotuned autopilot with the default autopilot, a position-tracking cost variable J defined by

Next, the autotuner is tested in physical flight tests conducted in the M-Air facility at the University of Michigan, Ann Arbor with the Holybro X500 quadcopter frame. The M-Air is equipped with a motion capture system that allows high-precision position and attitude measurements.

This paper presented an adaptive autotuner that can automatically tune a multicopter autopilot without using any modeling information about the multicopter. The adaptive autotuner, implemented in the PX4 flight stack, consists of adaptive PID controllers that are updated by the retrospective cost adaptive control algorithm by flying a single learning trajectory.

Future work will focus on using the adaptive autopilot to improve the performance of the default autopilot flying a multicopter with an unknown suspended payload and under various actuator failure conditions.

First, consider the case where d≥2q(T1). In this case, the quadcopter cruises at v(t)=vmax for t∈[T1,T2], where t=T2 denotes the time at which deceleration phase starts, and is calculated as shown below. Note that

Since the quadcopter takes T1 seconds to decelerate from vmax to 0 speed at constant deceleration amax, the total flight time is Tf=T1+T2 and

It follows from (19) that T2=dvmax and thus, the total flight time Tf=vmaxamax+dvmax. The distance q(t) is thus given by

Next, consider the case where d<2q(T1). In this case, the quadcopter velocity does not reach vmax, that is, there is no cruise phase. Let ¯T1 denote the time instant at which maximum velocity ¯vmax is reached. Thus, ¯T1=¯vmaxamax and q(¯T1)=12¯v2maxamax. Assuming that the quadcopter decelerates at the same rate to rest, it follows that q(¯T1)=d/2, and thus ¯vmax=√damax, ¯T1=√damax,and Tf=2√damax. The distance q(t) is thus given by