The behavior of the iterative/subdivision hybrid algorithm for curve/curve intersection proposed in [21] depends on the choice of the domain for their convergence test. Using either too small or too large test domain may cause the test to fail to detect cases where Newton's method in fact converges to a solution, which results in unnecessary additional subdivisions and consequently more computation time. We propose a modification to the algorithm to adaptively adjust the test domain size according to what happens during the test of the parent region. This is in contrast to the original algorithm whose test domain is always a fixed multiple of the input domain under consideration. Computational results show that the proposed algorithm is slightly more efficient than the original algorithm. 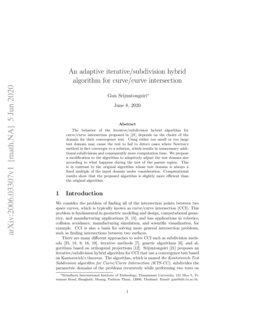 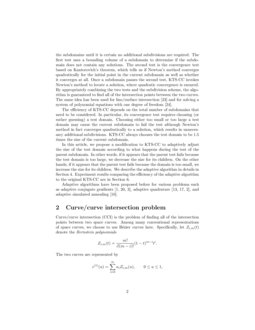 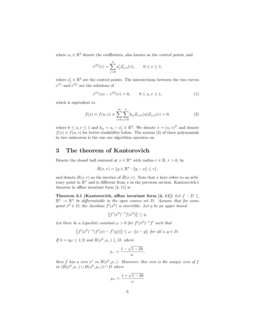 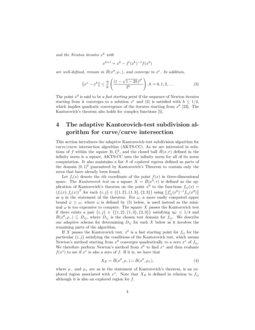 Intersections between the norm-trace curve and some low degree curves

In this paper we analyze the intersection between the norm-trace curve o...
Matteo Bonini, et al. ∙

A continuation method for computing the multilinear Pagerank

The Stability of Convergence of Curve Evolutions in Vector Fields

We consider the problem of finding all of the intersection points between two space curves, which is typically known as curve/curve intersection (CCI). This problem is fundamental in geometric modeling and design, computational geometry, and manufacturing applications [8, 15], and has applications in robotics, collision avoidance, manufacturing simulation, and scientific visualization, for example. CCI is also a basis for solving more general intersection problems, such as finding intersections between two surfaces.

[6], and algorithms based on orthogonal projections [12]. Srijuntongsiri [24] proposes an iterative/subdivision hybrid algorithm for CCI that use a convergence test based on Kantorovich’s theorem. The algorithm, which is named the Kantorovich-Test Subdivision algorithm for Curve/Curve Intersection (KTS-CC), subdivides the parametric domains of the problems recursively while performing two tests on the subdomains until it is certain no additional subdivisions are required. The first test uses a bounding volume of a subdomain to determine if the subdomain does not contain any solutions. The second test is the convergence test based on Kantorovich’s theorem, which tells us if Newton’s method converges quadratically for the initial point in the current subdomain as well as whether it converges at all. Once a subdomain passes the second test, KTS-CC invokes Newton’s method to locate a solution, where quadratic convergence is ensured. By appropriately combining the two tests and the subdivision scheme, the algorithm is guaranteed to find all of the intersection points between the two curves. The same idea has been used for line/surface intersection [22]

The efficiency of KTS-CC depends on the total number of subdomains that need to be considered. In particular, its convergence test requires choosing (or rather guessing) a test domain. Choosing either too small or too large a test domain may cause the current subdomain to fail the test although Newton’s method in fact converges quadratically to a solution, which results in unnecessary additional subdivisions. KTS-CC always chooses the test domain to be 1.5 times the size of the current subdomain.

Adaptive algorithms have been proposed before for various problems such as adaptive conjugate gradients [1, 20, 3], adaptive quadrature [13, 17, 2], and adaptive simulated annealing [10].

Curve/curve intersection (CCI) is the problem of finding all of the intersection points between two space curves. Among many conventional representations of space curves, we choose to use Bézier curves here. Specifically, let Zi,m(t) denote the Bernstein polynomials

The two curves are represented by

where ai∈R3 denote the coefficients, also known as the control points, and

where a′j∈R3 are the control points. The intersections between the two curves c(1) and c(2) are the solutions of

where 0≤u,v≤1 and bij=ai−a′j∈R3. We denote x=(u,v)T and denote f(x)≡f(u,v) for better readability below. The system (2) of three polynomials in two unknowns is the one our algorithm operates on.

3 The theorem of Kantorovich

Denote the closed ball centered at x∈Rn with radius r∈R, r>0, by

and denote B(x,r) as the interior of ¯B(x,r). Note that x here refers to an arbitrary point in Rn and is different from x in the previous section. Kantorovich’s theorem in affine invariant form [4, 11] is

Let f:D⊆Rn→Rn be differentiable in the open convex set D. Assume that for some point x0∈D, the Jacobian f′(x0) is invertible. Let η be an upper bound

and the Newton iterates xk with

are well-defined, remain in ¯B(x0,ρ−), and converge to x∗. In addition,

This section introduces the adaptive Kantorovich-test subdivision algorithm for curve/curve intersection algorithm (AKTS-CC). As we are interested in solutions of f within the square [0,1]2, and the closed ball ¯B(x,r) defined in the infinity norm is a square, AKTS-CC uses the infinity norm for all of its norm computation. It also maintains a list S of explored regions defined as parts of the domain [0,1]2 guaranteed by Kantorovich’s Theorem to contain only the zeros that have already been found.

Let fi(x) denote the ith coordinate of the point f(x) in three-dimensional space. The Kantorovich test on a square X=¯B(x0,r) is defined as the application of Kantorovich’s theorem on the point x0 to the functions fij(x)=(fi(x),fj(x))T for each {i,j}∈{{1,2},{1,3},{2,3}} using ∥∥f′ij(x0)−1fij(x0)∥∥ as η in the statement of the theorem. For ω, a more easily computed upper bound ^ω≥ω, where ^ω is defined by (5) below, is used instead as the minimal ω is too expensive to compute. The square X passes the Kantorovich test if there exists a pair {i,j}∈{{1,2},{1,3},{2,3}} satisfying η^ω≤1/4 and ¯B(x0,ρ−)⊆Dij, where Dij is the chosen test domain for fij. We describe our adaptive scheme for determining Dij for each X below as it involves the remaining parts of the algorithm.

If X passes the Kantorovich test, x0 is a fast starting point for fij for the particular {i,j} satisfying the conditions of the Kantorovich test, which means Newton’s method starting from x0 converges quadratically to a zero x∗ of fij. We therefore perform Newton’s method from x0 to find x∗ and then evaluate f(x∗) to see if x∗ is also a zero of f. If it is, we have that

The other test used by our algorithm is the exclusion test. For a given square X, let ^fX be the Bernstein polynomial that reparametrizes with [0,1]2 the function defined by f over X. In other words, ^fX(q)≡f(λ(q)), where λ(q) is a (uniquely determined) composition of a dilation and translation such that λ:[0,1]2→X is bijective (Refer to [21] for an example of efficient reparametrization algorithms). The square X passes the exclusion test if the convex hull of the control points of ^fX excludes the origin. It is a well-known property of the Bernstein-Bézier representation of a polynomial f that f(U) lies in the convex hull of its control points, where U

[14] shows that low-dimensional linear programming problems can be solved in linear time (i.e., linear in the number of control points), although we have not used Megiddo’s algorithm.

If a square X=¯B(x0,r) fails the exclusion test, we then subdivide X along both axes into four equal smaller squares X1, X2, X3, and X4 to be further investigated regardless of whether it passes the Kantorovich test (since there may be more than one zero in X and passing the Kantorovich test guarantees converging to only one of them). We choose the test domains for the subsquares Xk’s depending on how X does on the Kantorovich test. Specifically, suppose Dij=¯B(x0,αijr). Let Dkij=¯B(x0k,αkijr′) denote the test domain for Xk with respect to fij, where Xk=¯B(x0k,r′). If X passes the test (for any fij), we set αkij=αij for all k and all pair {i,j}. If X fails the test for fij by having η^ω≤1/4 but ¯B(x0,ρ−)⊈Dij, we set αkij=αij+ϵ for all k, where ϵ is a fixed constant. The rationale is that it is possible that x0 is in fact a fast starting point but we choose too small Dij for the test. Specifically, although increasing Dij may increase ^ω, it may not cause η^ω to be greater than 1/4 but make ¯B(x0,ρ−)⊆Dij. On the other hand, if X fails the test because η^ω>1/4, we set αkij=max(1,α−ϵ) for all k. Similarly, x0 may be a fast starting point but we choose too large Dij for the test (since decreasing the size of Dij may decrease ^ω enough to satisfy η^ω≤1/4). We do not allow αkij to be smaller than 1 as Dkij should not be smaller than Xk (otherwise, the Kantorovich test would not be able to detect a zero near a border of Xk). For comparison, the original (nonadaptive) KTS-CC uses αij=1.5 for all X’s and all {i,j}’s.

Lastly, our algorithm maintains a first-in-first-out queue of areas in [0,1]2 together with their three test domains that still need investigation. The details of AKTS-CC are as follows.

The Kantorovich test requires the Lipschitz constant for f′ij(x0)−1f′ij≡g over Dij. This constant is typically obtained from the upper bound of the norm of

denote the ι1ι2ι3-entry of h(x). Let ^hι1ι2ι3 be the polynomial in Bernstein basis that reparametrizes with [0,1]2 the function defined by hι1ι2ι3 over Dij. We have

For this reason, an upper bound of maxx∈[0,1]2|^hι1ι2ι3(x)| can be computed from the maximum absolute value of the control points of ^hι1ι2ι3(x) when written in Bernstein basis. Let ^ω denote the Lipschitz constant computed in this manner, that is,

We implement the proposed adaptive algorithm AKTS-CC in Matlab and compare its efficiency with varying values of ϵ against KTS-CC on a number of test problems. Our implementation use the reparametrization algorithm presented in [21]. The experiments are performed using tolerance of 10−7 for Newton’s method parts of both algorithms. The test problems and their intersections computed by AKTS-CC are shown in Figures 1 to 8. Table 1 compares the efficiency of AKTS-CC and KTS-CC on the eight test problems. It reports the degrees of the two curves and the total number of squares examined by AKTS-CC for different values of ϵ and KTS-CC during the entire computations. Since the number of operations per While-loop iteration in AKTS-CC is only a small constant larger than in KTS-CC, the efficiency of the two algorithms depend on the total number of iterations, which is the same as the number of squares examined.

The results show that AKTS-CC is slightly more efficient than KTS-CC in three of the eight test problems and is as efficient as KTS-CC in the five remaining ones. Additionally, AKTS-CC saves just four squares in those cases. On the other hand, as AKTS-CC differ from KTS-CC only on the choices of the test domains for the Kantorovich test, which matters when the current square contains a zero, we do not expect improvement on squares not containing any zeros in any case.

We propose Algorithm AKTS-CC that is a modification of KTS-CC to adaptively determine the test domains for the Kantorovich test based on the result of the same test on the parent square. The test domains for f12, f13, and f23 for the same square are determined independently. The algorithm is implemented in Matlab and is shown to be marginally more efficient than KTS-CC in some test cases and equally efficient in others. Future investigations on different adaptive schemes may result in larger improvement of the efficiency of the algorithm.