This paper introduces an accurate edge-based smoothed finite element method (ES-FEM) for electromagnetic analysis for both two-dimensional cylindrical and three dimensional cartesian systems, which shows much better performance in terms of accuracy and numerical stability for mesh distortion compared with the traditional FEM. Unlike the traditional FEM, the computational domain in ES-FEM is divided into nonoverlapping smoothing domains associated with each edge of elements, triangles in two dimensional domain and tetrahedrons in three dimensional domain. Then, the gradient smoothing technique is used to smooth the gradient components in the stiff matrix of the FEM. Numerical results show that the ES-FEM can obtain much more accurate results than the traditional FEM and is independent of distortion of background meshes, which shows great potential to solve practical electromagnetic problems. 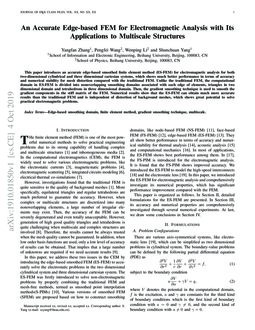 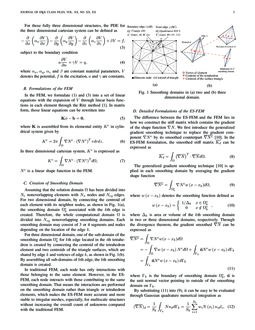 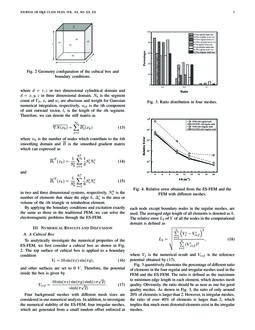 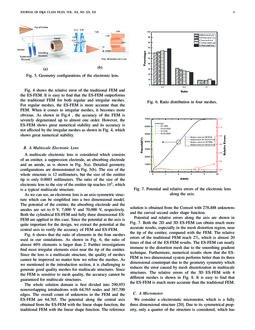 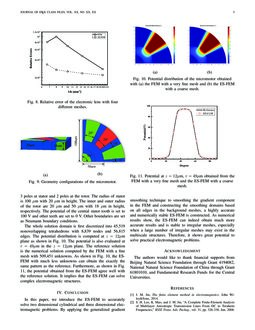 The phenomenon of linear motion of conductor in a magnetic field is comm...
Sujata Bhowmick, et al. ∙

Mesh Denoising based on Normal Voting Tensor and Binary Optimization

We present the capabilities and results of the Parallel Edge-based Tool ...
Octavio Castillo-Reyes, et al. ∙

The finite element method (FEM) is one of the most powerful numerical methods to solve practical engineering problems due to its strong capability of handling complex and multiscale structures [1] and inhomogeneous media [2]. In the computational electromagnetics (CEM), the FEM is widely used to solve various electromagnetic problems, like the electrostatic currents [3], magneticstatic problems [4], electromagnetic scattering [5], integrated circuits modeling [6], electrical-thermal co-simulations [7].

However, investigations found that the traditional FEM is quite sensitive to the quality of background meshes [1]. More specifically, equilateral triangles and regular tetrahedrons are much preferred to guarantee the accuracy. However, when complex or multiscale structures are discretized into many nonoverlapping elements, a large number of irregular elements may exist. Then, the accuracy of the FEM can be severely degenerated and even totally unacceptable. However, generation of high good quality triangles and tetrahedrons is quite challenging when multiscale and complex structures are involved [8]. Therefore, the results cannot be always trusted when the mesh quality cannot be guaranteed. In addition, when low order basis functions are used, only a low level of accuracy of results can be obtained. That implies that a large number of unknowns are required if we need accurate results [9].

In this paper, we address these two issues in the CEM by introducing the edge-based smoothed FEM (ES-FEM) to accurately solve the electrostatic problems in the two dimensional cylindrical system and three dimensional cartesian system. The ES-FEM was firstly introduced to solve non-electromagnetic problems by properly combining the traditional FEM and mesh-free methods, termed as smoothed point interpolation methods(S-PIMs)

[10]. Various versions of smoothed FEM (SFEM) are proposed based on how to construct smoothing domains, like node-based FEM (NS-FEM) [11], face-based FEM (FS-FEM) [12], edge-based FEM (ES-FEM) [13]. They all show better performance in terms of accuracy and numerical stability for thermal analysis [14], acoustic analysis [15] and computational mechanics [16]. In most of applications, the ES-FEM shows best performance among them. In [17], the FS-PIM is introduced for the electromagnetic analysis. It is found that the FS-PIM shows improved accuracy. We introduced the ES-FEM to model the high-speed interconnects [18] and the electrostatic lens [19]. In this paper, we introduced the ES-FEM for electromagnetic analysis and comprehensively investigate its numerical properties, which has significant performance improvement compared with the FEM.

This paper is organized as follows. In Section II, detailed formulations for the ES-FEM are presented. In Section III, its accuracy and numerical properties are comprehensively investigated through several numerical experiments. At last, we draw some conclusions in Section IV.

, which can be simplified as two dimensional problems in cylindrical system. The boundary-value problems can be defined by the following partial differential equation (PDE) as

subject to the boundary condition

subject to the boundary condition

where αx, αy, αz and β are constant material parameters, V denotes the potential, f is the excitation, a and γ are constants.

Ii-B Formulations of the FEM

In the FEM, we formulate (1) and (3) into a set of linear equations with the expansion of V through linear basis functions in each element through the Ritz method [1]. In matrix form, those linear equations can be rewritten into

In three dimensional cartesian system, Ke is expressed as

Ne is a linear shape function in the FEM.

For three dimensional domain, one of the sub-domain of the smoothing domain Ωsk for kth edge located in the ith tetrahedron is created by connecting the centroid of the tetrahedron element and two centroids of the triangle surfaces, which are shared by edge k and vertexes of edge k, as shown in Fig. 1(b). By assembling all sub-domains of kth edge, the kth smoothing domain is created.

In traditional FEM, each node has only interactions with those belonging to the same element. However, in the ES-FEM, each node interacts with those contributing to the same smoothing domain. That means the interactions are performed on the smoothing domain rather than triangle or tetrahedron elements, which makes the ES-FEM more accurate and more stable to irregular meshes, especially, for multiscale structures without increasing the overall count of unknowns compared with the traditional FEM.

Ii-D Detailed Formulations of the ES-FEM

The difference between the ES-FEM and the FEM lies in how we construct the stiff matrix which contains the gradient of the shape function ∇N. We first introduce the generalized gradient smoothing technique to replace the gradient component ∇Ne by its smoothed counterpart ¯¯¯¯¯¯¯¯¯¯¯¯∇Ne [10]. In the ES-FEM formulation, the smoothed stiff matrix ¯¯¯¯¯¯¯Kd can be expressed as

where w(x−xk) denotes the smoothing function defined as

where Δk is area or volume of the kth smoothing domain in two or three dimensional domains, respectively. Through the divergence theorem, the gradient smoothed ¯¯¯¯¯¯¯¯¯∇N can be expressed as

where Γk is the boundary of smoothing domain Ωsk, →n

By substituting (11) into (9), it can be easy to be evaluated through Gaussian quadrature numerical integration as

where d=r,z in two dimensional cylindrical domain and d=x,y,z in three dimensional domain, Nb is the segment count of Γk, xi and wi are abscissas and weight for Gaussian numerical integration, respectively, nid is the ith component of unit outward vector, li is the length of the ith segment. Therefore, we can denote the stiff matrix as

in two and three dimensional systems, respectively, Nke is the number of elements that share the edge k, Δie is the area or volume of the ith triangle or tetrahedron element.

By applying the boundary conditions and excitation exactly the same as those in the traditional FEM, we can solve the electromagnetic problems through the ES-FEM.

To analytically investigate the numerical properties of the ES-FEM, we first consider a cubical box as shown in Fig. 2.

and other surfaces are set to 0 V. Therefore, the potential inside the box is given by

Four background meshes with different mesh sizes are considered in our numerical analysis. In addition, to investigate the numerical stability of the ES-FEM, four irregular meshes, which are generated from a small random offset enforced at each node except boundary nodes in the regular meshes, are used. The averaged edge length of all elements is denoted as h. The relative error L2 of V of all the nodes in the computational domain is defined as

where Vs is the numerical result and Vref is the reference potential obtained by (17).

As we can see, an electronic lens is an axis-symmetric structure which can be simplified into a two dimensional model. The potential of the emitter, the absorbing electrode and the anodes are set to 0 V, 7,000 V and 70,000 V, respectively. Both the cylindrical ES-FEM and fully three dimensional ES-FEM are applied in this case. Since the potential at the axis is quite important for the design, we extract the potential at the central axis to verify the accuracy of FEM and ES-FEM.

Potential and relative errors along the axis are shown in Fig. 7. Both the 2D and 3D ES-FEM can obtain much more accurate results, especially in the mesh distortion region, near the tip of the emitter, compared with the FEM. The relative errors of the traditional FEM reach 2%, which is almost 20 times of that of the ES-FEM results. The ES-FEM can nearly immune to the distortion mesh due to the smoothing gradient technique. Furthermore, numerical results show that the ES-FEM in two dimensional system performs better than its three dimensional counterpart due to the geometry symmetry which reduces the error caused by mesh discretization in multiscale structures. The relative errors of the 3D ES-FEM with 4 different meshes is shown in Fig. 8. It is easy to find that the ES-FEM is much more accurate than the traditional FEM.

We consider a electrostatic micromotor, which is a fully three dimensional structure [20]. Due to its symmetrical property, only a quarter of the structure is considered, which has 3 poles at stator and 2 poles at the rotor. The radius of stator is 100 μm with 20 μm in height. The inner and outer radius of the rotor are 20 μm and 50 μm with 18 μm in height, respectively. The potential of the central stator tooth is set to 100 V and other teeth are set to 0 V. Other boundaries are set as Neumann boundary conditions.

In this paper, we introduce the ES-FEM to accurately solve two dimensional cylindrical and three dimensional electromagnetic problems. By applying the generalized gradient smoothing technique to smoothing the gradient component in the FEM and constructing the smoothing domains based on all edges in the background meshes, a highly accurate and numerically stable ES-FEM is constructed. As numerical results show, the ES-FEM can indeed obtain much more accurate results and is stable to irregular meshes, especially when a large number of irregular meshes may exist in the multiscale structures. Therefore, it shows great potential to solve practical electromagnetic problems.